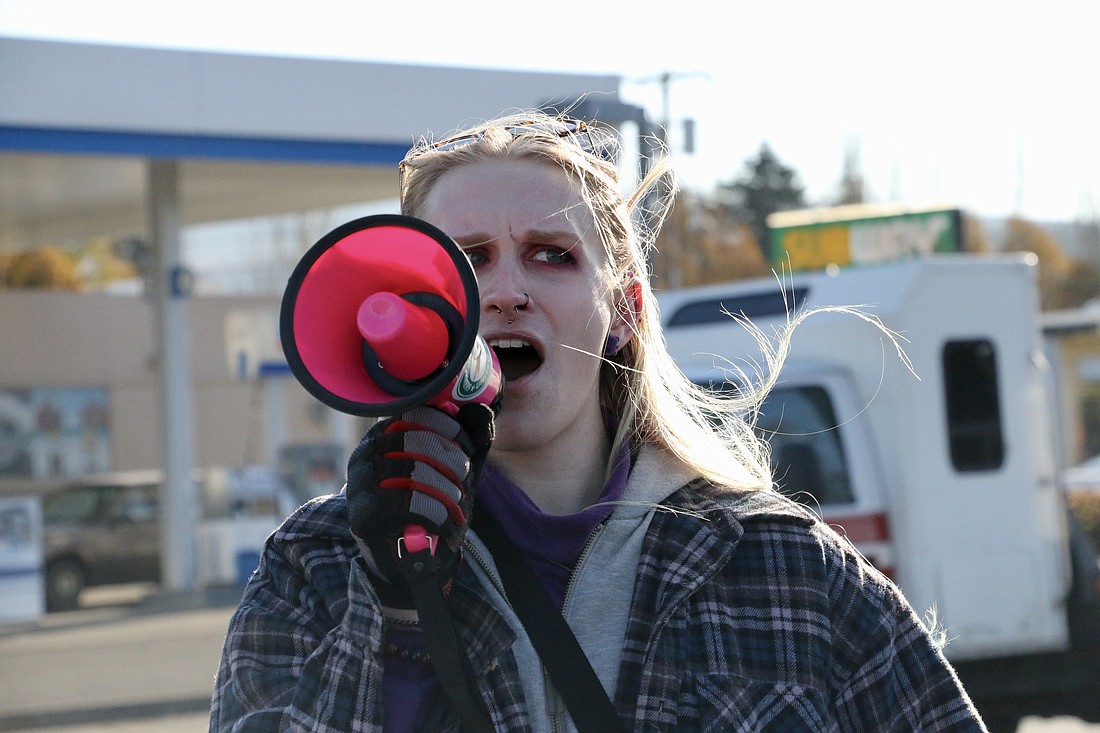 Cameron Cogle, an employee at the Cordata Starbucks location in Bellingham, recently transferred from a unionized Starbucks in King County. She led chants and cheered on the crowd during the "Red Cup Rebellion." (Julia Lerner/Cascadia Daily News)
By JULIA LERNER
Staff Reporter

Chants of “Bellingham is a union town!” and “We pull the shots, we call the shots!” rang through the air at the Iowa and King streets Starbucks drive-thru, where baristas from three Bellingham coffee shops gathered to strike Thursday morning, on Starbucks' Red Cup Day.

Red Cup Day is an annual promotion put on by stores across the country, where patrons can get free collectible, reusable red cups with holiday designs. The free cups drive major traffic — and profit — to the company.

Employees from the Iowa and King Starbucks, the Cordata Starbucks and the Sehome Starbucks participated in the national “Red Cup Rebellion,” along with more than 100 stores nationwide. 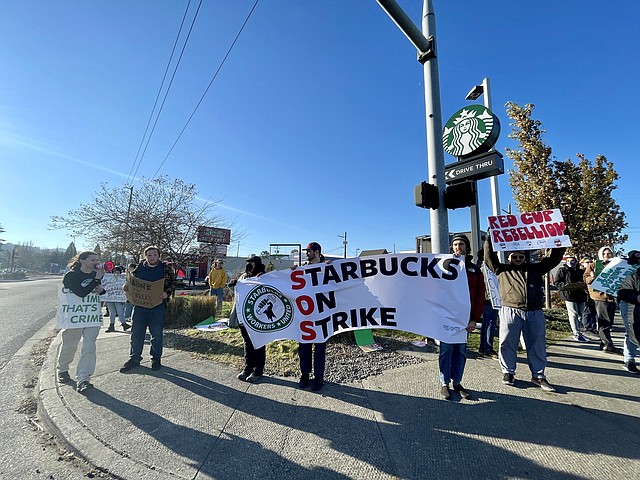 “Red Cup Day is our busiest and biggest day of the year,” said Shannon Butler, a barista at Iowa and King. “By striking, we’re just trying to show Starbucks that they need to sit down and bargain with us.”

Baristas said the day was significant because strikes this broad could have a major impact on profits.

“With over 110 stores nationwide banning together to protest against Starbucks, it’s going to take a hit to their sales,” said Cameron Cogle, a recent transfer to the Cordata location. Cogle moved from an already-unionized location in King County.

“Here in Bellingham, people have been really supportive of union groups,” she said. “We’re together, we’re standing up against them, and we’re here for a better cause.”

The Iowa and King location unanimously voted to form a union on June 24, and the Cordata location voted to form one shortly after. Employees at the Sehome Starbucks filed their intent to unionize in October.

Last week, employees from the two unionized locations sat down at the Cordata shop for a bargaining meeting with lawyers from Starbucks. According to Butler, the lawyers left the building in less than 10 minutes.

Despite the strike, managers at the Sehome location opted to open the store short-staffed.

“It was open for a couple of hours,” said Alex Ruderman, from the Cordata store. “We ended up shutting down that store. We were able to get rid of enough customers.”

Ruderman called the employees who worked at Sehome this morning “scabs,” a word often used to refer to strikebreakers.