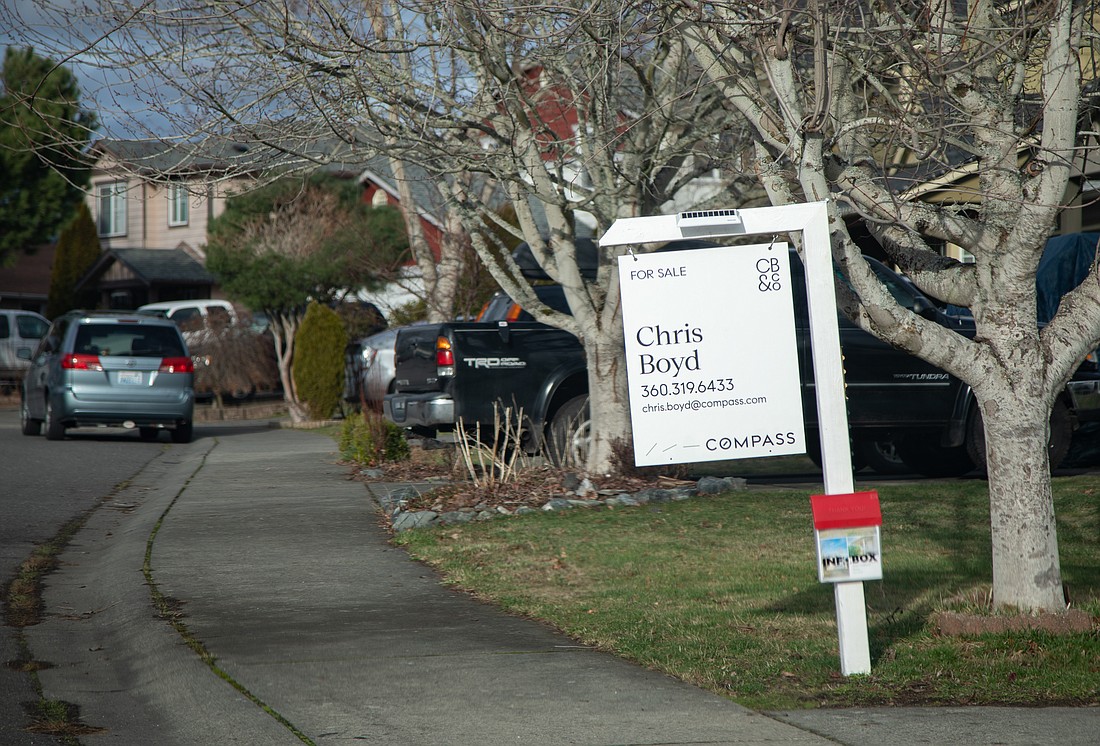 A "For Sale" sign is posted outside a home in the King Mountain neighborhood. Bellingham had the highest median selling price in Whatcom County in 2022, up 13% from 2021. (Hailey Hoffman/Cascadia Daily News)

Rounded, it’s up 9%. For residential real estate buyers and sellers in Whatcom and Skagit counties, 2022 was quite a ride. Increasingly higher home prices followed by a doubling of mortgage interest rates and a dramatic drop in sales left participants feeling dizzy, if not a little nauseous.

Annual numbers quantify the queasiness. Reports based on data from Northwest Multiple Listing Service — released by The Muljat Group for Whatcom County and Brown McMillen Real Estate for Skagit County — peg 2022 median selling prices at $600,000 and $543,000, respectively. That’s up what historical observers might consider a respectable 9.2% in Whatcom and 8.6% in Skagit from 2021.

But look back one more year and the disparity is stark. In 2021, Whatcom median prices were up 24.3% from 2020, and Skagit up 18.5%. That’s a level of increase the home market “can’t sustain” for long, said Peter Ahn, co-owner of The Muljat Group, in releasing the report.

The combination of even comparatively more modest sales price hikes with skyrocketing average 30-year fixed mortgage interest rates (topping out at over 7%) last year took its toll. In Whatcom County, the number of homes sold in 2022 dropped 10.4% to 2,928; in Skagit County, it decreased 4.6% to 1,783.

That meant Whatcom’s home sales were the fewest county wide since 2014, according to Ahn.

But no county is a monolith. A few communities bucked the homogenized trends.

The lowest median selling price — that “middle” dollar value at which half of home sales are higher and half are lower — out of the dozen communities in both reports was in Mount Baker, at $370,000. Its year-to-year price increase of 2.8% was low, but not as low as La Conner, where the median selling price was unchanged from 2021.

Yet La Conner’s median selling price was $500,000. As a matter of fact, aside from Mount Baker, no community tracked in either report had a median price below $500K.

One saving grace for stressed-out buyers, at least in some areas, might be how long listed homes stayed on the market before a sale went pending. Average days on market were 25 in Whatcom and Skagit generally (unchanged and up from 2021, respectively). But it was 30 days or more in the communities of Birch Bay/Blaine, Mount Baker, Nooksack Valley and La Conner.

For 2023, that could portend a somewhat more level ride. For a roller coaster, that’s boring. But in a housing market, perhaps it’ll mean less of a white-knuckle experience for everyone.

The Bellingham Regional Chamber of Commerce’s fourth quarter 2022 survey of businesses had much to say about perceptions of success and safety — in addition to the staffing struggles detailed in my Jan. 4 column.

The survey, fielded in October, garnered 110 responses from Chamber members and newsletter subscribers. Guy Occhiogrosso, Chamber president and CEO, noted that four out of five respondents said they were business owners or the top local employee of a larger business.

“It’s good for us to know that a considerable portion are still feeling that [pandemic] impact,” Occhiogrosso said.

Safety concerns, too, bubbled up. Do they feel Bellingham/Whatcom County is a safe place to do business? The largest percentage — 58% — responded they still feel safe, but not as safe as they used to feel. A second-place 29% answered they don’t feel safe but hope it will get better.

Do the businesses’ employees feel safe? The most common survey response, at 44%, was no, employees are concerned for their own well-being and personal safety.

The top two responses about what could lead to a safer community were close to equal in popularity (respondents could choose more than one answer): more mental health services, and more law enforcement/better response time.

“I think for the most part our business community understands the nuance of police versus social services,” Occhiogrosso said. “The question now is how we pay for it.” Even with concerns about not feeling fully safe, Occhiogrosso saw “hopefulness” in the answers.

Skagit Valley Food Co-op announced it’s donated $100,000 to Viva Farms “to support local, organic agriculture and the future of farming in Skagit Valley.” The Mount Vernon-based grocer is making the donation to kick off its 50th anniversary year.

Recipient Viva Farms is a nonprofit organic farm and beginning-farmer support organization which is said to address the “generational crisis” of the simultaneous rapid loss of farmland and skilled farmers in a time of increased food needs. The Co-op also will host a related free event Thursday, Jan. 26 at the Lincoln Theatre in Mount Vernon, Feeding Skagit Forever.