'These two major [programs] are leading the nation, and to some degree, the world' 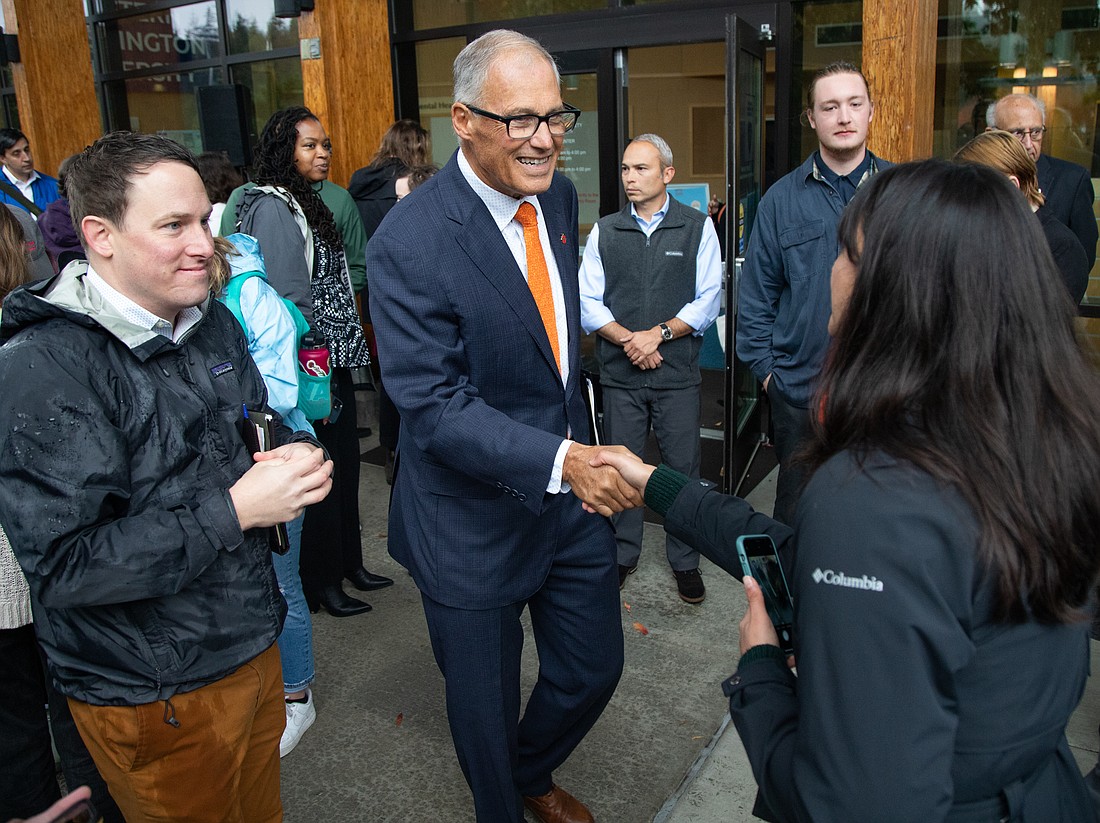 Gov. Jay Inslee, pictured at an event at Western Washington University on Oct. 21, celebrated the state's Climate Commitment Act and the state's clean fuel standard during a press conference on Jan. 4. Inslee detailed the cap-and-invest program alongside state leaders from the Departments of Ecology and Commerce. (Hailey Hoffman/Cascadia Daily News)
By JULIA LERNER
Staff Reporter

The initiatives, including a new cap-and-invest program and the “Clean Fuel Standard” as part of the 2021 Climate Commitment Act, will target the state’s largest sector of carbon emissions: transportation.

The two programs, combined with other legislation from the Climate Commitment Act and the 2035 zero-emission vehicle policy, will help remove more than 4.3 million metric tons of fuel emissions each year while meeting state-established climate goals, Washington Department of Ecology Director Laura Watson said.

“By 2034, we will cut transportation fuel emissions by 20%,” she said during a joint conference with Inslee Wednesday. “That equates to taking about 900,000 cars off the road. I’m talking about internal combustion engine cars.”

The cap-and-invest program is one of the first in the nation to target emissions by limiting major emissions sources. Businesses will need to obtain emission allowances to cover their carbon emissions, Watson said. Those allowances will come from Ecology auctions each quarter, or will be bought and sold on a secondary market like stocks and bonds.

Funds from auctions will be reinvested in the state, Watson said.

During the first auction, slated for late February, 6.185 million allowances will be sold, with a minimum allowed bid of $22.20 per allowance. At this point, representatives from Ecology are hesitant to estimate how much revenue the auctions will raise each quarter.

Each year, Ecology will release fewer and fewer allowances for auction, which will help the state reach emissions targets established by the 2019 Clean Energy Transformation Act.

The act's current goals require the state to cut ties with coal and rely entirely on clean energy by 2040. Much of the battle, Inslee said, is reducing transportation emissions, which currently account for about 39% of state greenhouse gas emissions, according to the latest data from Ecology.

A state fuel standard, alongside the cap-and-invest program and a 2035 ban on gas-powered cars, will help significantly.

“These two [programs] are leading the nation, and to some degree, the world, in their efforts because they are comprehensive, they are realistic, they are achievable, they are well-thought-out and now, we’ve actually pushed the go button,” Inslee said.

Inslee said the programs have been in the works for years.