Salvage crews successfully lifted the Aleutian Isle on Saturday. The 49-foot fishing vessel is still in the water after crews determined current rigging and plans are unsafe. (Photo courtesy of the Canada Department of Fisheries and Oceans)
By JULIA LERNER
Staff Reporter

More than a month after it sank, the Aleutian Isle has been lifted off the sea floor.

The 49-foot fishing vessel, which initially sank off the coast of San Juan Island on Aug. 13, has been precariously balanced more than 200 feet below the surface for weeks while dive teams struggled to salvage it in the rough conditions of the Haro Strait.

The vessel was lifted off the sea floor Saturday afternoon and remains suspended on the surface of the water while divers prepare a new recovery plan.

“The vessel is currently too heavy to lift out of the water and place on the barge in a safe manner,” U. S. Coast Guard Petty Officer Valerie Higdon said. “They’re having difficulty accessing the vessel’s fuel tanks and the other tanks that have taken on water.”

Higdon said the rigging placements holding the vessel are also a concern. Divers will need to readjust them to maintain the structure of the vessel.

“Raising the vessel to the surface is certainly a success, but the complexity of this operation continues to challenge our team,” USCG Commander Kira Moody wrote in a news release late Sunday night. “Lifting the boat was a critical first step to minimize the ongoing pollution risk. The next step will likely involve relocating the crane barge to a more sheltered location, where we can fully secure the boat with far less risk to our divers and crew and better protect the environment from any lingering pollution risk.”

When the vessel sank in August, it had close to 2,500 gallons of fuel on board, and it has been leaking small “burps” of diesel into the water. Removing the fuel containers while the vessel was on the sea floor was not an option, and removing them with the current rigging could cause the vessel to break and release the remaining fuel.

The effort to lift the ship was organized by USCG contractors Global Diving & Salvage, a marine casualty response and support organization headquartered in Seattle.

“We are removing the vessel from a very complex place back to the surface,” said Kerry Walsh, a marine casualty project manager and salvage master at Global. “It [was] in heavy currents and in a pretty precarious spot, hovering on the abyss, where it could dislodge and slide down into 600, 700 feet of water easily. We had to be really careful and methodical.” 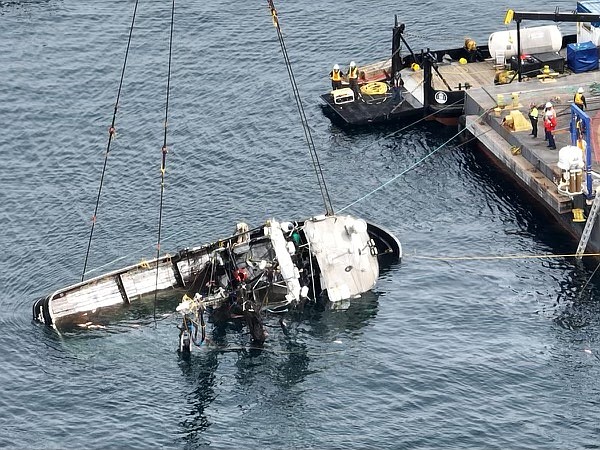 The Aleutian Isle will remain in the water until salvage crews develop a new removal plan. Currently, the vessel is too heavy and waterlogged to be placed on the waiting barge. (Photo courtesy of the Canada Department of Fisheries and Oceans)

Walsh managed a team of seven divers through the salvage process, which involved rigorous, but limited, time in the water removing loose netting around the vessel and locating fuel containers onboard.

“The complication is that you have a very limited amount of bottom time working, so the diver has maybe only 40 minutes on the bottom,” Walsh said Friday. “Once you get below 200 feet, air basically becomes toxic, so you have to switch to a different gas.”

Early in the process, initial dives were delayed while salvage crews waited for appropriate deep-water equipment, including a barge, a crane and heliox: a gas mixture of helium and oxygen that allows divers to breathe under deepwater pressure.

Divers were usually allowed two periods of time per day to be on the sea floor due to strong tides and currents, according to Higdon. Higdon said the Coast Guard has been monitoring the currents with the National Oceanic and Atmospheric Administration each day to ensure divers have safe windows to work, but sometimes they weren’t allowed in the water at all.

“Each window gives divers about 30 minutes of work time, but then it takes another 90 minutes to get to the surface,” Higdon said.

Once divers reach the surface, they have another two-hour “decompression” window, Walsh said.

“Essentially, you get 40 minutes of work from a diver who is engaged in and under hyperbaric pressure for about six hours,” he said. “It’s pretty complicated.”

Though few details have been shared about the cause of the incident, eyewitnesses say they saw the vessel run aground just 24 hours before it sank, according to reporting from KUOW.

The vessel was leaving moorage at the Cap Sante Marina in Anacortes when it supposedly ran aground. Eyewitnesses said they saw the boat “stop abruptly,” before a smaller skiff pulled the vessel afloat again.

“It did seem to come to a stop, and one could assume it ran aground,” Dan Worra, the executive director for the Port of Anacortes, told the Cascadia Daily News. “I don't know for sure, but that's what I would assume.”

Worra said it's unusual for a vessel to run aground in the area, and exit channels are “clearly marked.”

It’s unclear if the possible grounding caused any damage to the vessel, or if it was related to the vessel sinking the next day.

At this time, a 1,000-foot safety perimeter remains in place around the vessel.