Juvenile salmon present in the waters at high risk 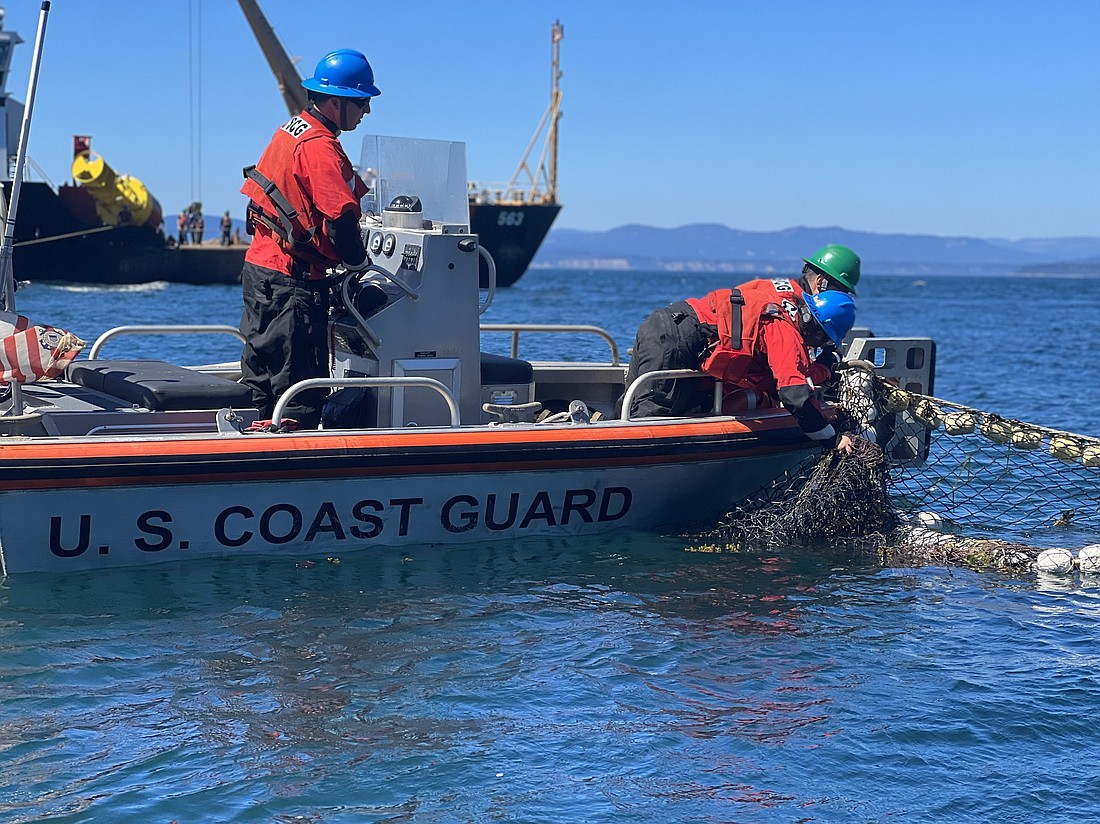 Divers have struggled to remove fuel containers from the Aleutian Isle, a fishing vessel that sank near the San Juan Islands Aug. 13. (Photo courtesy of the Washington State Department of Ecology)
By JULIA LERNER
Staff Reporter

On Saturday afternoon, the Aleutian Isle, a 49-foot commercial fishing vessel, began taking on water before sinking to the sea floor near the west side of the island, leaking diesel into the surrounding waters. Since then, much of the fuel spill has dissipated, but still, concerns remain.

“I’m still kind of holding my breath and not sleeping right since [the spill],” said Jess Newley, the community science and education manager at Friends of the San Juans, a group protecting the land and water around San Juan Island.

Newley dives regularly in the region where the vessel went down, documenting fish populations and studying eelgrass habitats and bull kelp forests around the islands.

“I was in the water a couple of weeks ago, and we were out near the area where the vessel went down, so we have a pretty good idea of what kinds of species are currently here and utilizing our shorelines at the moment,” Newley said. “I’ve been to that site, near Dead Man’s Bay, so many times that I just have to check in on it right now, and make sure that everything looks normal.”

Crews cleaning up the site of the diesel leak have struggled in the week since the vessel went down, according to updates from the Unified Command, made up of leadership from responding agencies including the U.S. Coast Guard (USCG) and the Washington State Department of Ecology (DOE).

The vessel, which initially sank into waters around 100 feet deep, has shifted, with parts of the vessel currently under 240 feet of water. 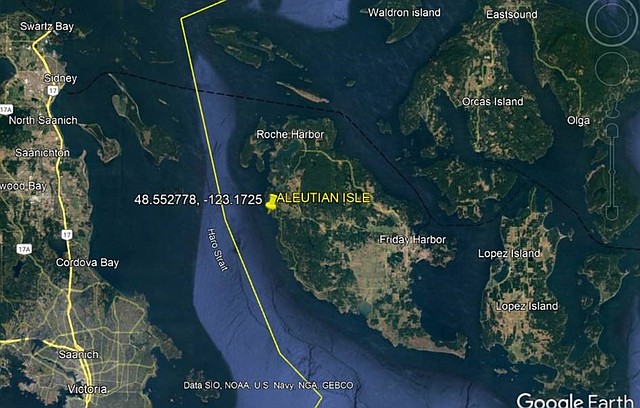 The Aleutian Isle, a 49-foot fishing vessel, sank near the west side of the San Juan Islands, prompting significant concerns from environmental experts and Southern Resident orca researchers. (Map courtesy of the Washington State Department of Ecology)

“Dives at this new depth now require additional equipment not readily available for the safety of those involved and the success of the operation,” according to a USCG update shared Thursday, Aug. 18. “The dive team departed Wednesday afternoon to retrieve more specialized equipment designed for dive operations at depths greater than 200 feet.”

Divers have not been able to retrieve the remaining fuel containers off the vessel, and as a result, “there’s still the threat of a larger spill,” said Lovel Pratt, the marine protection and policy director at Friends of the San Juans. “The oil that's still aboard the vessel hasn't been secured or recovered, so as long as the boat still has oil products aboard, there's a risk.”

Initial reports indicate close to 2,500 gallons of diesel were aboard the Aleutian Isle when it sank Saturday.

Throughout her dives, Newley has studied various fish species that use the region around the wreck as a spawning ground and said there’s significant concern about juvenile fish populations just below the surface of the water.

“Oil spills can negatively affect the development of juvenile fish populations that we see here like the herring and the salmon,” Newley said. “These small juvenile forage fish and juvenile salmon, we find them right at the surface and in super shallow water right under the surface, where they have potential for high exposure [to fuel].”

The juvenile fish present are particularly sensitive to fuel, according to NOAA researchers and other environmental experts.

“Petroleum products, even at extremely low levels, can have sublethal and lethal impacts to juvenile salmon and juvenile forage fish,” Eleanor Hines, lead scientist and North Sound baykeeper at local environmental nonprofit RE Sources, said in March. Studies “show that while it doesn’t always straight up kill them right away, it did have impacts that just made it harder throughout the remainder of that organism’s life to survive and thrive.”

The juvenile fish, particularly salmon, are vital to the local food chain, namely for the local Southern Resident orca pods, a group of critically endangered salmon-eating orcas in the Salish Sea. None of those whales have been spotted near the wreckage or the spill.

The Aleutian Isle, a fishing vessel, was in the waters with several drop nets found floating off the vessel underwater, presenting additional challenges to divers attempting to remove the fuel containers.

Booming will remain in place throughout the weekend, though “sheening continues to be negligible,” according to a Thursday night update from the Unified Command.

Newley plans to dive within a few miles of the spill this weekend, hoping to check on fish populations and eelgrass and bull kelp habitats.

“It’ll help me sleep better at night,” she said.

Members of the San Juan County Council heard an update from the Unified Command Friday afternoon, where they learned about the "difficult nature of accessing the wreck," current recovery plans and management plans regarding the Southern Resident orcas.