A look back at 6,000 nautical miles of open seas aboard small sailboat 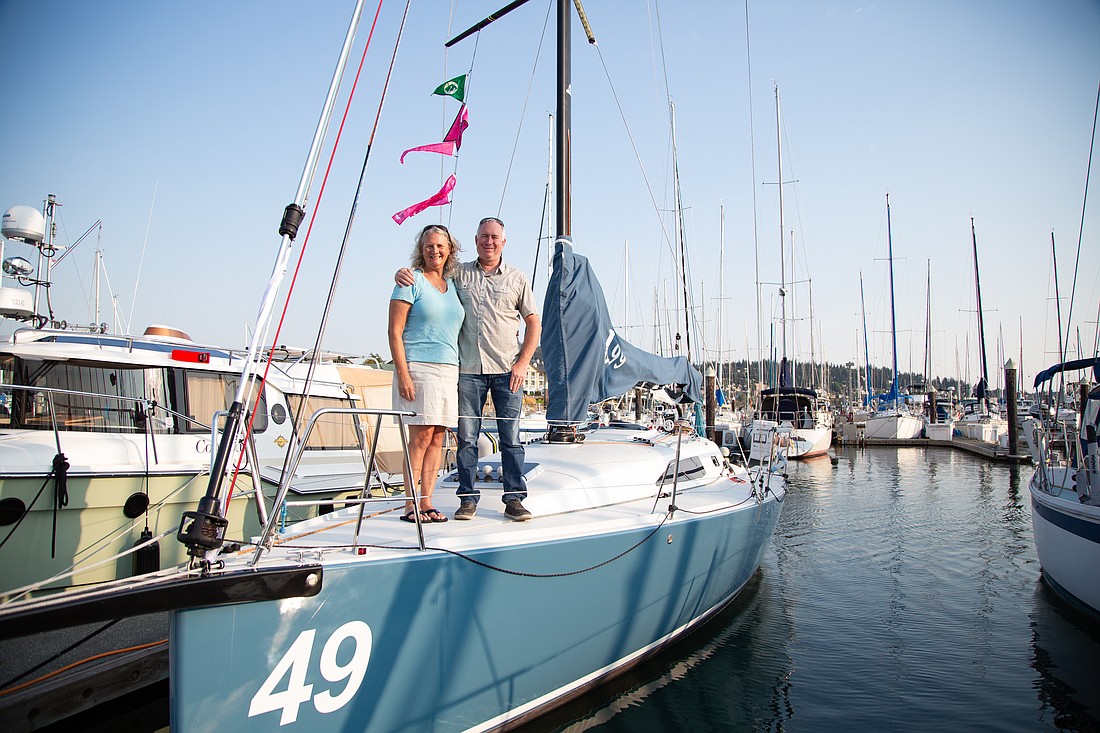 Stephanie Arnold, left, and Ken Machtley stand on the deck of their J-99 sailboat Dash in Squalicum Harbor on Sep. 2. The pair sailed to Hawaii aboard the 10-meter sailboat. (Hailey Hoffman/Cascadia Daily News)
By HAILEY HOFFMAN
Staff Reporter

It's typical to see a handful of sailboats dotting Bellingham Bay on a warm summer evening. What's hard to imagine is one jetting off into the open ocean, headed for Hawaii, and completing a 6,000-nautical-mile journey.

Partners Stephanie Arnold, 54, and Ken Machtley, 52, of Eastsound have sailed on and off since the 1980s, consistently for the past decade and together for the last four years, but this summer they took on an extra challenge and signed up for the Pacific Cup Race that ends in Hawaii. 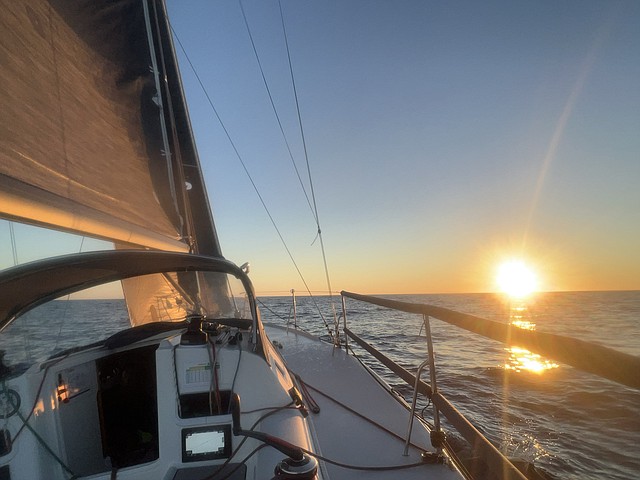 The annual race returned this year after a pandemic-related hiatus, and more than 60 boats took the journey from San Francisco to Kaneohe Bay, Oahu.

“It's supposed to be the fun race to Hawaii,” Arnold said. “We both were interested in doing offshore racing, and neither one of us had done that before.” 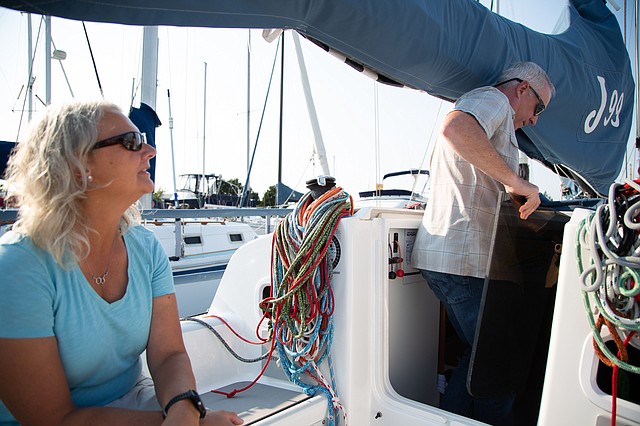 Stephanie Arnold, left and Ken Machtley climb around on the deck of the sailboat. (Hailey Hoffman/Cascadia Daily News)

Arnold and Machtley “double-handed” — sailed with just two people — their light-blue, J-99 sailboat, Dash, for 15 days across the open ocean in their greatest adventure yet, placing fifth in their six-boat division.

The pair met while sailing and have been together, navigating the Pacific Northwest coast, since 2019. Their goals with this race were to “still talk to each other and finish,” Machtley joked.

On June 16, the pair left Orcas Island. The hardest part of the journey wasn't even the race itself; it was getting to San Francisco before the race began, Machtley said. They hit weather and some of the roughest seas they would experience on the entire two-month journey. Winds picked up above 30 knots and waves more than 3 meters tall crashed across the 10-meter long boat, according to their blog which also tracked their route.

The pair arrived in San Francisco in one piece one week later, on June 23. They made the final fixes and preparations before beginning their journey across the ocean. On July 5, Dash crossed the start line with the five other boats in its division, destined for Hawaii.

For the next two weeks, Arnold and Machtley had to stay in complete control of their boat. They slept in shifts of three hours, making sure someone was always awake and ready. They said the seas were “confused," and the winds different than expected with more squalls — sudden, violent gusts of wind. The pair had to always be vigilant, ready to react to whatever the next cloud or weather pattern brought them.

“If this is the fun race, what's the non-fun race?” Arnold quipped. 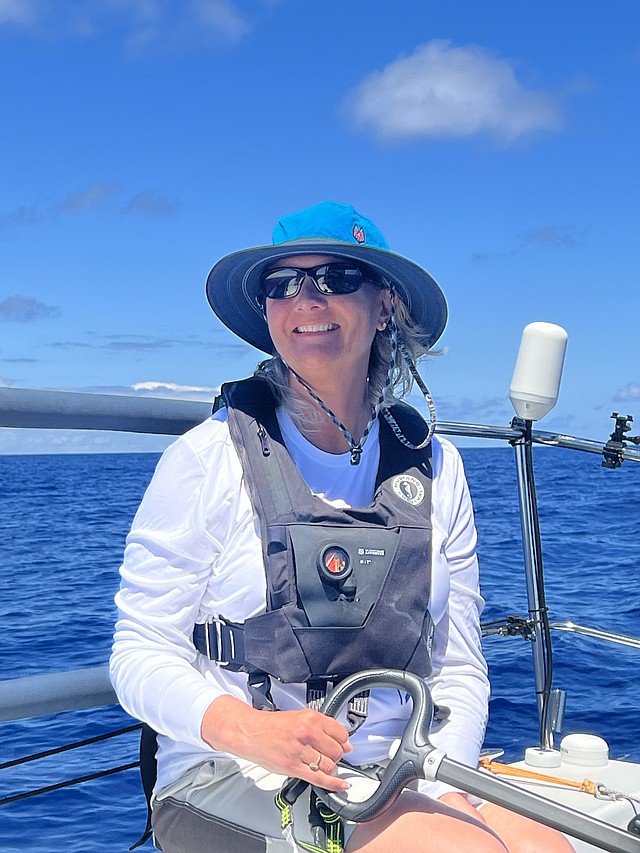 Arnold and Machtley said one of the highlights was seeing all the wildlife and looking at the stars and moon on clear nights. One day, they sailed alongside a pod of dolphins and on another day, a pod of whales.

“I came up at night and I could hear them all around the boat, blowing, but you couldn't see them. It was pitch-black dark,” Arnold said. “It was cool. But, at the same time, you know they can damage your boat, so you don't want them to get too close to the boat either.”

Machtley managed navigation, taking information about directions, potential weather and other data from their Iridium Go! satellite communicator. They were able to send and receive short messages — even post small blogs — as a means of contact with the outside world. 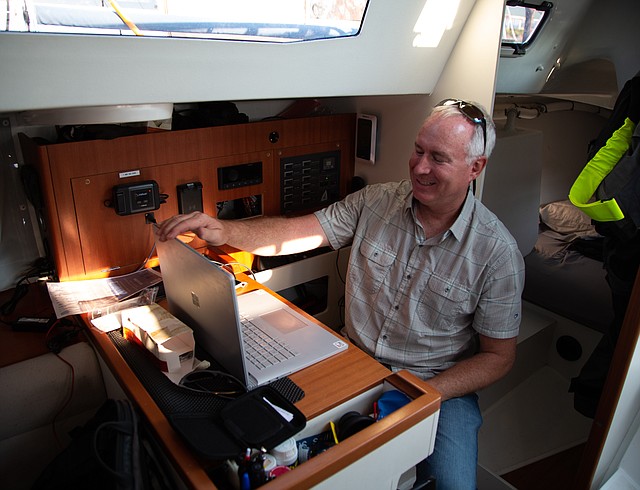 Ken Machtley shuts the laptop at the boat's naviagtion station. Machtley used a satellite communication device to get weather reports and other information during the race. (Hailey Hoffman/Cascadia Daily News)

For other safety measures, the race required that sailors have a lifeboat, practice man-overboard drills, carry 10 gallons of water per racer and more. In addition, they had a 12-gallon fuel tank and a solar panel to charge electronics. They carried a small gas stove and other kitchen essentials to cook hot meals in the dry hull of the boat, where they also slept.

On July 20, they arrived to Oahu just as a luau put on by Kaneohe Yacht Club closed out. The pair was warmly welcomed, met with leis and Mai Tais as they celebrated the long journey with the other racers. 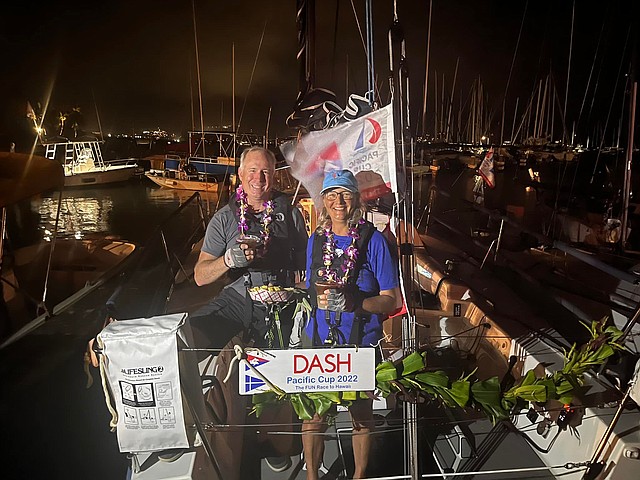 Looking back on the trip, Machtley and Arnold wished they'd practiced their skills more. They'd spent two years preparing their boat and making sure they met race qualifications, but if they had refined some of their skills, tasks like sailing through the night could have been a little smoother.

“You can never be too comfortable,” Arnold said. “You always have to be fearful of the water and the weather. You must respect Mother Nature.”

On their smooth sail back, they took two additional crew members, swam in the deep open ocean and were welcomed by a pod of orcas as they approached Orcas Island on Aug. 21.