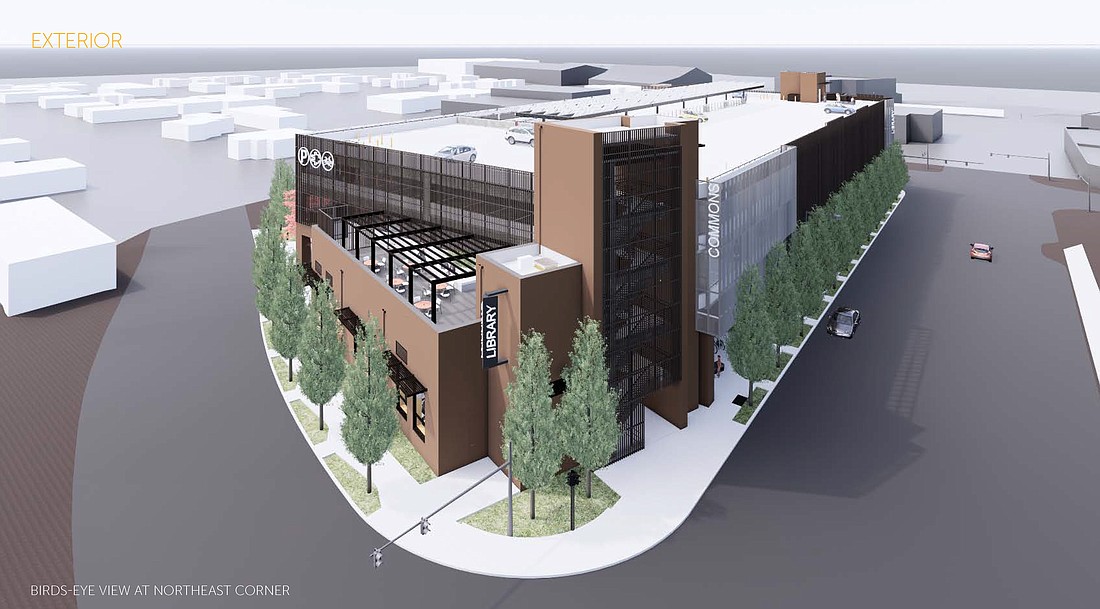 Mount Vernon will break ground this month on the Library Commons, a multiuse public building that will include a new space for the city's library and a three-level parking garage. A groundbreaking ceremony is scheduled for Sept. 17. (Graphic courtesy of City of Mount Vernon)
By RALPH SCHWARTZ
Staff Reporter

Envisioned more than a decade ago as a parking garage that would help downtown Mount Vernon grow, the Library Commons that breaks ground this month has evolved into a potential community hub for Skagit County’s largest city.

The Library Commons will be the new home for the Mount Vernon Library, and a meeting space with room for 300 people and a commercial kitchen. The original parking garage concept also remains intact.

The top three floors of the $53 million project amount to 125,000 square feet of parking with 76 electric-vehicle charging stations. The building will also have nine e-bike stations.

“We needed to combine all of the needs that we have in one project, for efficiency,” Boudreau said. “This just made so much sense to us.” 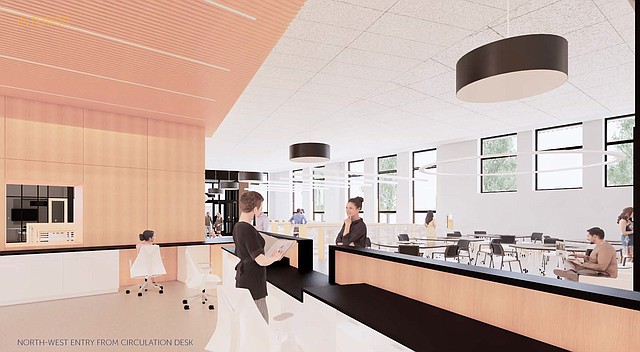 The Mount Vernon Library will move into the first floor of the Library Commons after it is completed at the end of 2023. The new library will have a larger children's area and a STEM learning center for teens. (Graphic courtesy of City of Mount Vernon)

The Commons will be built with what’s called a passive house envelope, which will increase energy efficiency by about 60%. The building will be essentially sealed in an outer envelope of air and insulation, to keep interior temperatures steady. Everything in the building will be powered by electricity, to avoid the higher carbon footprint of natural gas.

The Library Commons will be built across the street from the county courthouse, on Kincaid Street between Second and Third streets. The public is invited to a groundbreaking ceremony on that lot (208 W. Kincaid St.) at 10 a.m. on Sept. 17. The building is scheduled to be completed by the end of next year.

With offices in Bellevue and eastern Washington, Lydig isn’t local, but it is familiar. The construction firm completed Skagit County’s new jail in Mount Vernon in 2017 and was wrapping up renovations at Mount Vernon High School last month.

The full cost of the project is $53 million, including the purchase of half a city block owned by Skagit County. It’s a large price tag for a city with a population of 36,000.

A large chunk of the funding came from the state’s Local Infrastructure Financing Tool (LIFT). The program allowed cities to borrow against future tax receipts and came with a state match. All told, the program will contribute $25 million to the Library Commons.

“That’s a big lift for us,” Boudreau said, with a nod to the program’s apt acronym. “We’re just thrilled to be able to have that.”

The city chipped in another $9.36 million, and it received $3.7 million in federal funds, including a $2 million earmark from U.S. Rep. Suzan DelBene. Among the state allocations was a $4 million grant the Legislature added to its capital budget during this year’s session.

For now, the project is underfunded by about $6 million — an amount Boudreau is confident the city will find. It may get a grant to install the EV charging stations, she said.

“We’re pretty confident we’ll be able to cobble that together without the council going into a little bit of debt there,” the mayor said.