You're visiting them, not the other way around 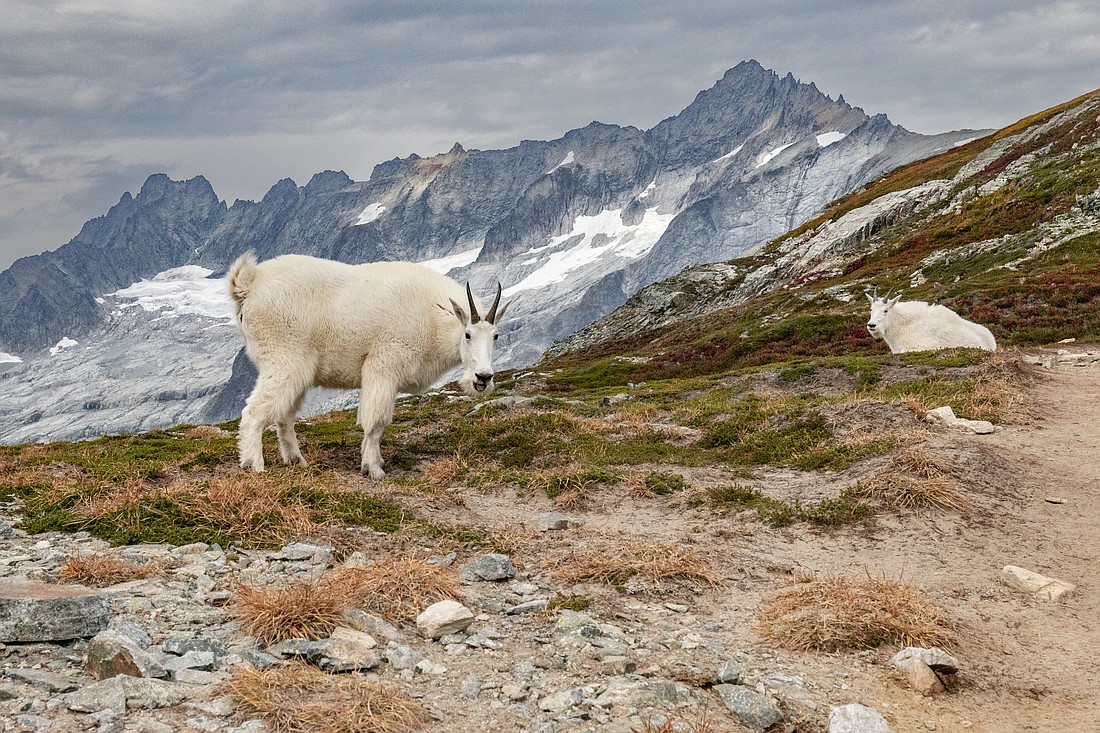 NORTH CASCADES NATIONAL PARK – Emily Stratmeyer of Seattle did everything right as two carefree mountain goats sauntered up the trail just below the glaciated peak of Sahale Mountain.

She and three other hikers climbed a mound of granite along the ridge known as Sahale Arm to give the snowy white ungulates a wide berth.

Yet, Stratmeyer, a barista and lawyer, did not sound confident during a visit to North Cascades National Park.

“What do we do?” she shouted as we trudged up toward Sahale Glacier, well behind the goats.

Even cute and docile-looking wildlife need to be treated respectfully, as Stratmeyer did. Our group showed reverence for the creatures on a Doctor Doolittle day in the great outdoors while also observing four black bears, marmots as big as Buicks, pika and grouse. The animals were busy stuffing themselves as autumn’s annual art show painted the heather-covered ridges in hues of crimson and amber. 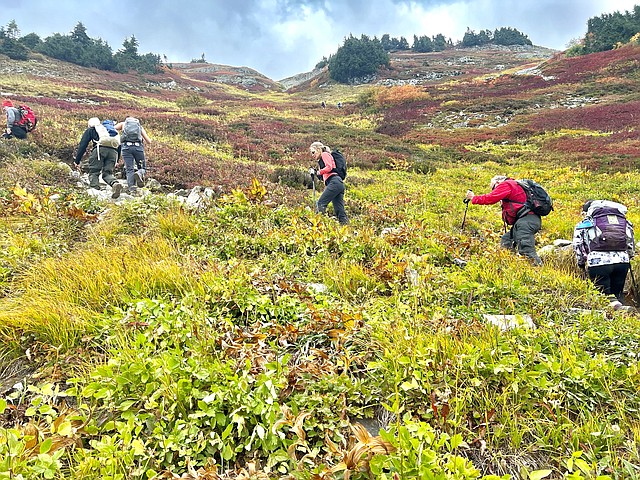 Ranger Brendan Oates of the North Cascades National Park Service Complex encountered mountain goats on Sahale Arm the day Cascade Pass opened this past summer. Oates said it was almost as if the alpine climbers were posing as hikers clicked their cameras.

“The goats were moseying around, using the trail,” he said. “Goats don’t follow the right of way.”

We first spotted the mountain goats well below us ambling along the trail. The twosome followed the maintained path as we gazed down upon them. Quickly, the agile creatures narrowed the gap between us.

Perhaps more than other wildlife, mountain goats sometimes are misunderstood. The animals are not part of the domesticated goat genus despite the resemblance that gives some people a false sense of security. Their scientific name is Oreamnos americanus; they are a cloven-hooved species of the Bovidae family that includes antelopes and gazelles.

Like Stratmeyer and her friend Leeza Malachevsky of Seattle, we had reason to be unnerved in the presence of sharp-horned beasts who can exhibit erratic behavior.

Twelve years ago, a goat mortally wounded a Port Angeles man trying to shoo it away four miles from the Hurricane Ridge Visitor Center in Olympic National Park. The incident made international headlines and remains on the minds of Pacific Northwest climbers and hikers. 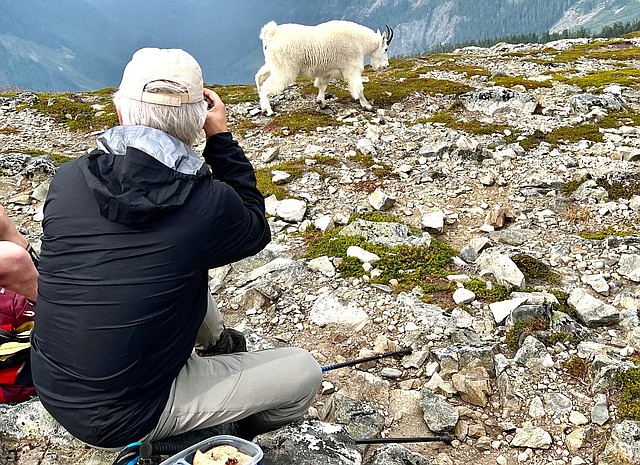 Bellingham Boomers leader Ken Harrison crouches to capture a photo of a mountain goat that tramped through a hikers’ lunch spot on Sahale Arm on Sept. 28 in North Cascades National Park. (Photo by Elliott Almond)

For the most part, outdoors lovers and mountain goats enjoy a healthy truce in the upper ridges of the Cascades. But the Olympic Mountains present a different scenario.

Hunting advocates introduced mountain goats to the Olympics in the early 1900s before the area became a national park. The goat population exploded once park officials banned hunting.

Further complicating matters, biologists determined the Olympics range is unsuitable for the species because of the lack of available salt.

“Mountain goats need salt and then tend to get it from salt lick,” said Oates, referring to a place where animals get essential nutrients from a deposit of salts and other minerals.

Humans also produce a ton of salt with sweat and urine. The mountain goats have discovered people are an easy and reliable salt resource. The Olympic National Park breed has been aggressive in trying to get salt and food from humans.

Something had to give, and by 2018, park officials launched a removal program. Within two years, a total of 412 mountain goats were taken from the Olympic Peninsula, with 325 animals released into the Cascades, according to the park service.

The North Cascades is one of the mountain goats’ natural habitats. Park biologists report that despite the surge in visitors, the goat populations in greater North America are strong.

“It’s a good time to be a goat,” said Oates, an eight-year veteran of the park service.

The influx of humans, though, leads to uncomfortable situations. Mountain goats are known to lick salt from backpack straps or off a person’s skin. And they particularly like urine.

Pee at least 200 feet from a trail, Oates said.

Park rangers also encourage visitors to stay at least 50 yards away when encountering mountain goats, elk, moose and other megafauna not considered predators like bears and cougars. 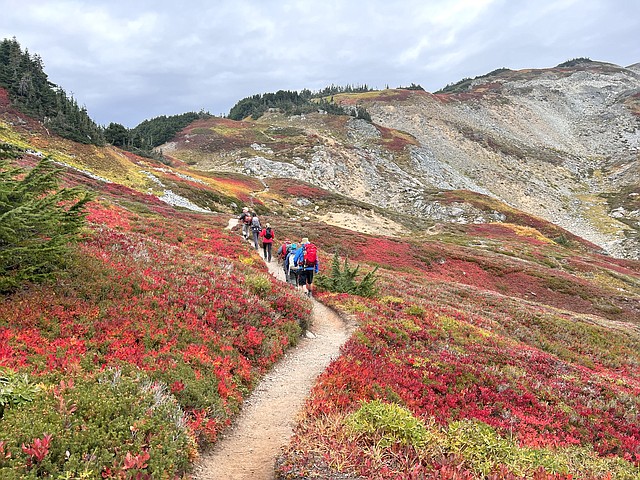 In other words, no selfies with the sure-footed goat.

It must be stated that mountain goats generally are not threatening. But they can use those gut-slicing horns for defense, as was the case a year ago in Yoho National Park in British Columbia. A mountain goat killed an attacking female grizzly bear by impaling it.

Oates said a lot of the human-goat interactions this year involved climbers on the Blue Lake trail and Liberty Bell area near Washington Pass.

The mountain goats startled us after we had settled in for lunch on Sahale Arm. They suddenly appeared over the ridge and walked toward us, before heading up the hill and scaring Stratmeyer and Malachevsky.

It’s a constant war out there.

“It only takes a couple seconds of turning your back and then a mountain goat is getting into your trail mix,” Oates added.

We also were enjoying the craggy mountains above Cascade Pass at the start of the breeding season, which is from October to December. The billys tend to be more aggressive during autumn, like other animals who rut. Defensive measures sometimes need to be implemented if a mountain goat starts acting aggressively by pursuing a person.

Oates recommends standing your ground by yelling, waving arms, hiking poles and clothing, a similar tactic as when a black bear approaches. If those maneuvers fail to dissuade a mountain goat, run away. Or at least try to run. Mountain goats are known for speed and agility on steep inclines so humans cannot outrun them.

Finally, and we’re not sure this is the best course of action, experts suggest grabbing the animal’s deadly horns as a last resort. Mountain goats are too powerful to keep at bay for long, so the idea is another person would scare the mountain goat off once freed of its horns.

A goat approached me this summer while I lunched at the saddle of the Hidden Lake fire lookout in North Cascades National Park. It seemed curious, rather than aggressive, and eventually moved along the rocks. But it’s always wise to remain on high alert when in their presence.

“We’re visitors to them, not the other way around,” Oates said.

A panoramic image of the grandeur of the Sahale Arm trail in North Cascades National Park. (Photo courtesy of Ken Harrison)

Cascade Pass is a moderate 7.4-mile round-trip journey with an elevation gain of 1,700 feet. Getting to Sahale Arm is another 1,300 feet in elevation gain over about 1.8 miles one way. In other words, it is considered strenuous.

Note about the trail: A resident bear hangs out near the Arm throughout the summer months. Can’t blame the bear for enjoying the vistas of Boston Basin.

Directions: The trailhead is more than 2 hours from Bellingham. Take I-5 south to State Route 20 to Marblemount. At the eastern edge of town, go straight on Cascade River Road over a bridge just as SR 20 bends to the left. High-clearance vehicles are recommended for the 23-mile drive to the end where the trail begins.

Parking: A Northwest Forest Pass or federal interagency pass such as America the Beautiful or Senior Pass is required.