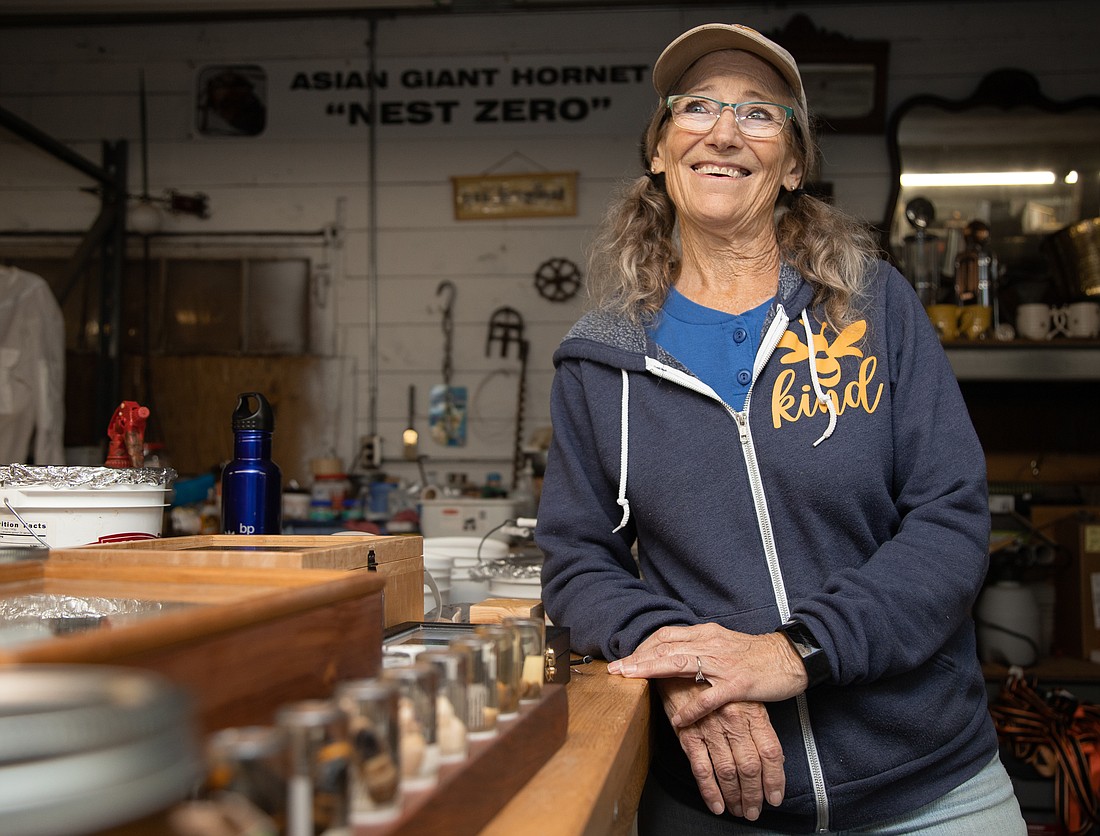 Ruthie Danielsen stands in her workshop at her home in Birch Bay on Oct. 17. Danielsen is the vice president of the Mt. Baker Beekeepers Association and is active in the effort to trap the Northern giant hornets. (Hailey Hoffman/Cascadia Daily News)
By JULIA LERNER
Staff Reporter

BIRCH BAY — Ruthie Danielsen’s minty green beehives dot the grass around her backyard. There are about eight of them — for now — spread out behind her home and around her workshop, housing thousands upon thousands of honeybees.

“I started out with two hives, which in the next spring always turns to four,” she said. “The second year, I went from four hives to 14 very healthy hives.” 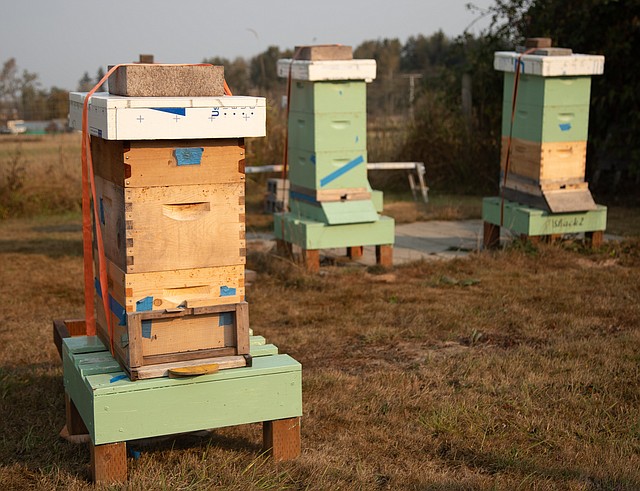 Those “very healthy” hives are critical for local environmental health, particularly as threats to bee populations rise. Varroa mites, pesticide use in agricultural communities and habitat loss put pressure on the already struggling populations, but the latest threat — the invasive Northern giant hornets — could be “one more pound on that horrible anvil threatening to come down,” Danielsen said.

Almost all of the Northern giant hornets — colloquially known as murder hornets — in the U.S. have been detected in Whatcom County, where “Nest Zero" was discovered in 2020. The three nests detected and destroyed the next year were all genetically related to Nest Zero, and so far in 2022, there have been zero confirmed sightings. 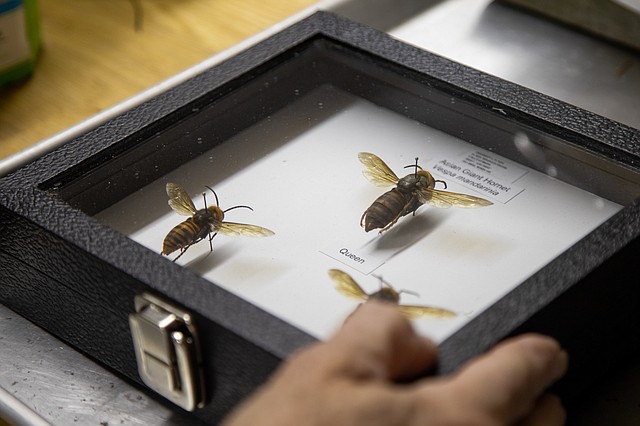 “Last year, our first confirmed hornet of the year came around mid-August,” Nathan Rouch, the Washington State Department of Agriculture’s (WSDA) pest biologist, said during a “murder hornet media day” in July. “We haven’t had a confirmed sighting this year.”

As vice president of the Mt. Baker Beekeepers Association (MBBA), Danielsen understands the importance of pollinators in the environmental health of the region, and has seen firsthand how bloodthirsty these hornets can be.

“They just slaughter entire honeybee hives,” she said. “In late October 2019, our [MBBA] president [at the time] found one of his hives dead, all of his honeybees completely decapitated.”

According to Karla Salp, WSDA’s acting communications director, it only takes a couple of Northern giant hornets to completely destroy a hive.

“We’re talking about thousands and thousands of bees that can be killed in just a matter of hours,” Salp said. 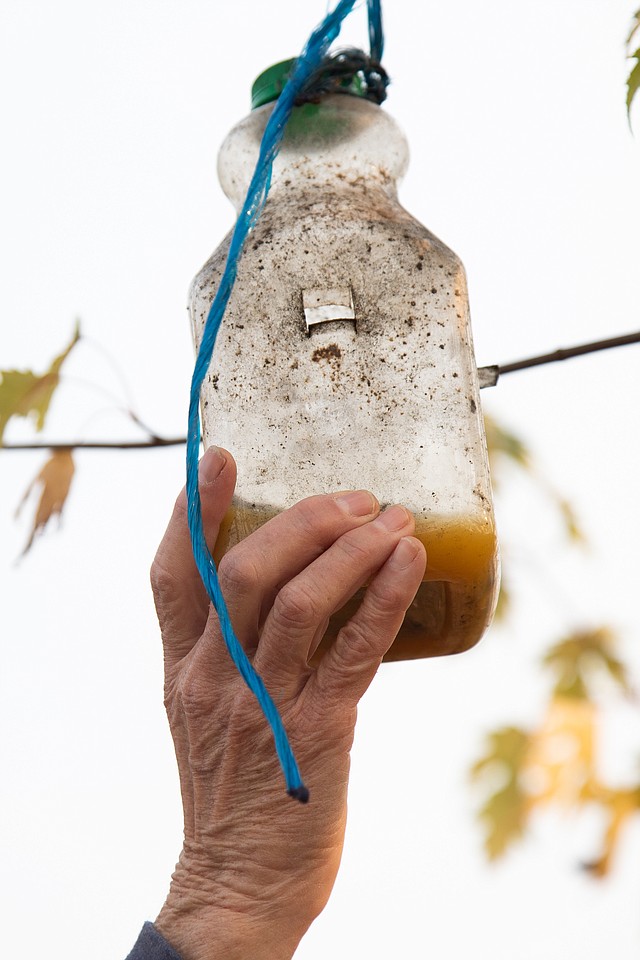 A Northern giant hornet trap — made from a plastic bottle and juice — hangs in a tree in Ruthie Danielsen's backyard. (Hailey Hoffman/Cascadia Daily News)

Danielsen caught the first hornet in her homemade trap back in 2020, after she organized her fellow beekeepers in citizen science projects in conjunction with the state Department of Ecology (DOE).

I happened to catch the first worker just a half mile from my house,” she said. “I was like, ‘Are you kidding me?’”

Citizen science projects, like the “adopt-a-wasp” program hosted by the WSDA and ongoing trapping efforts, have been critical in locating and identifying the hornets. 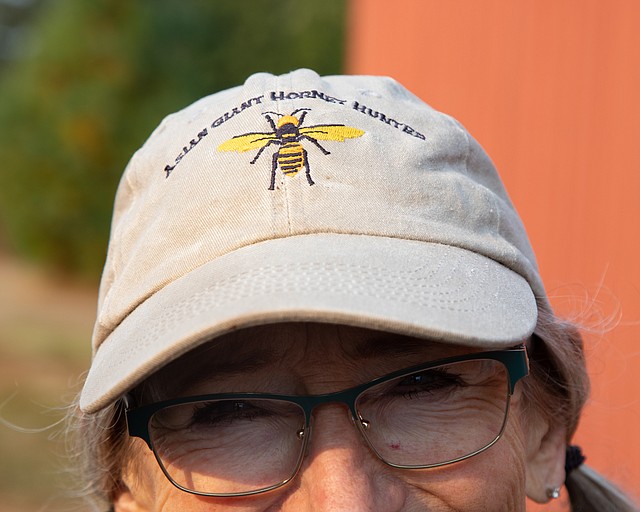 Throughout the process, Danielsen has managed to get her hands on several hornets, including the large queens, as well as Nest Zero, which she bought from a Lynden resident and shared with scientists at DOE and WSDA for research purposes.

Now, Nest Zero rests safely ensconced behind glass in the other Washington, on display at the Smithsonian's Natural History Museum until December. 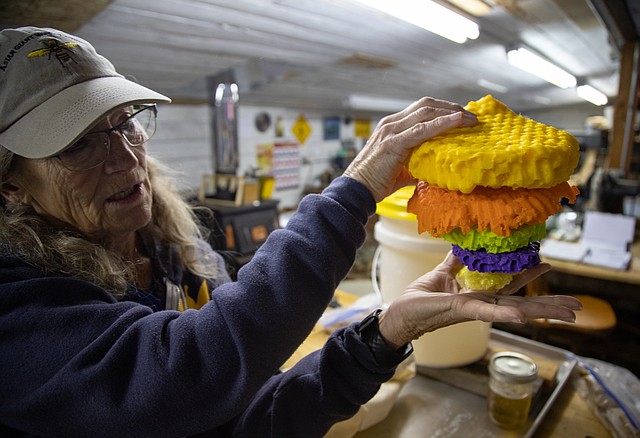 Danielsen recently returned from Washington, D.C., where she visited the nest and led expert talks for visitors at the museum, answering questions about the trapping process and the nests she had seen. More than 100 visitors stopped to listen to her talk about her experiences with the murder hornets.

“It was amazing,” she said. “It was the most amazing thing I’ve ever done in my life. You go to the Smithsonian to see all the cool stuff — I never in my wildest dreams imagined that I would ever talk there or get to see what’s behind the curtain.”

Even though the hornets seem to be laying low this season, Danielsen said we’re not out of the woods yet.

WSDA and DOE have deployed more than 1,000 traps this summer and will continue to do so for at least two more years. After three years without a confirmed sighting or trapping of a hornet, the state will declare the threat eradicated.

Washington residents can report Northern giant hornet sightings to the WSDA using a Hornet Watch Report Form, via email to hornets@agr.wa.gov or via phone at 800-443-6684.