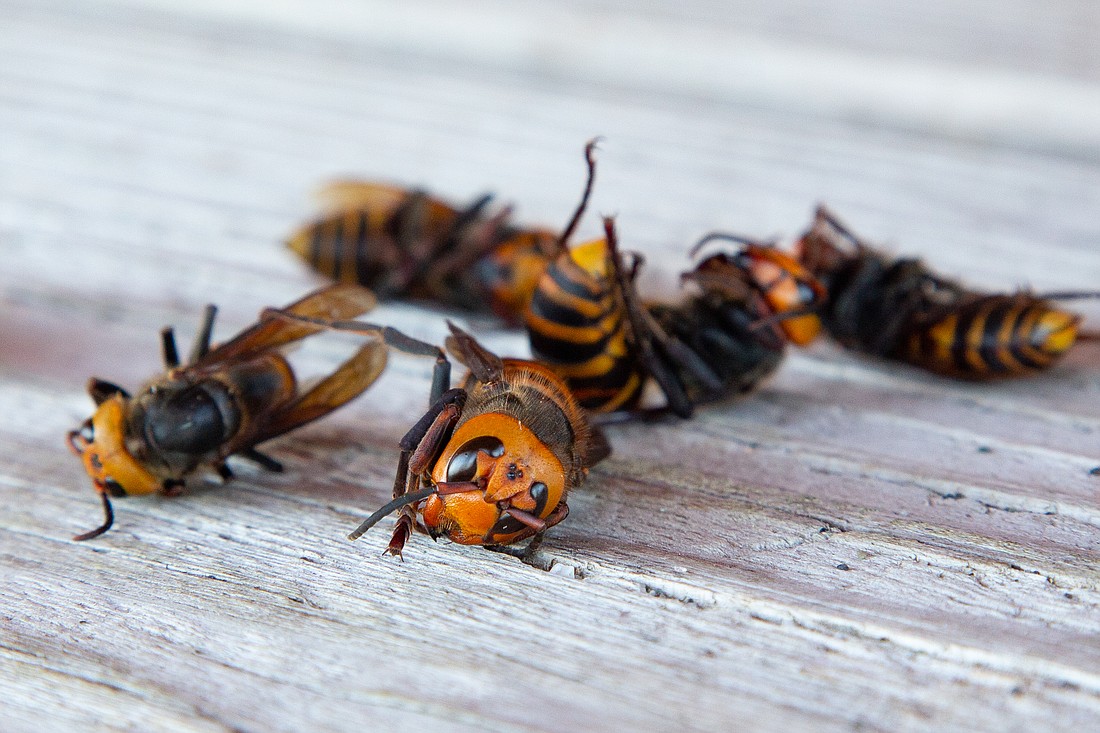 Though there are no confirmed sightings of Asian giant hornets yet this year, scientists and entomologists from the Washington Department of Agriculture (WSDA) were ready to talk about new research related to the massive bugs during a training session in Birch Bay State Park Tuesday.

The training session was designed to teach attendees about the trapping, tracking and eradication of the invasive hornets.

Among the small group of trainees: Washington Gov. Jay Inslee. 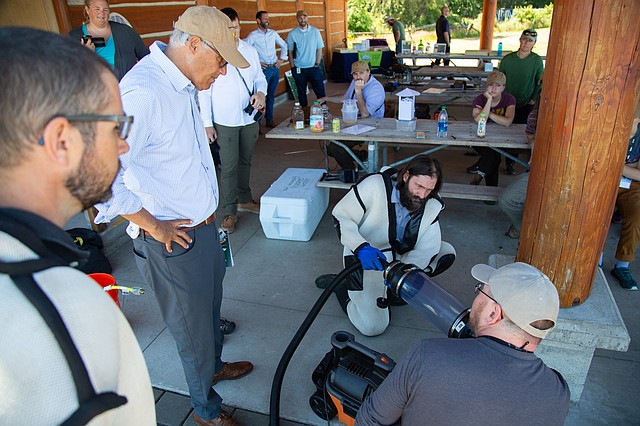 “I'm here getting briefed on our murder hornet eradication program,” Inslee told the Cascadia Daily News during the event Tuesday. “This is of intense interest to our whole state, not just Whatcom County because it's such a huge threat to our agricultural industry.”

Almost all of the Asian giant hornets in the United States have been detected in Whatcom, where the first nest in the country was discovered in 2020. Three more nests were found and destroyed throughout 2021, one in August and two in September.

Asian giant hornets, also known as “murder hornets,” can wipe out entire hives of bees in just a few hours, decapitating grown bees and wasps before feasting on their larva. The bugs, which are native to Japan and the largest hornet in the world at about 2 inches in length, are catastrophic for local bee populations.

“It only takes a handful of Asian giant hornets to go to a hive and completely wipe out all of the adult [bees] in a matter of hours,” said Karla Salp, WSDA’s acting communications director. “We’re talking about thousands and thousands of bees that can be killed in just a matter of hours.”

Though no hornets have been spotted yet this year, it's still early in the season.

“We're in mid-July, and we haven't had a confirmed sighting this year,” said WSDA pest biologist Nathan Rouche, who specializes in Asian giant hornets. “That's pretty on track with what we've seen in the past years. I think last year, our first confirmed hornet of the year came around mid-August.”

In May, the department received a report of a possible hornet but was unable to confirm it. The case, reported near Blaine, remains “suspicious,” Salp said, because there was no hornet captured and no photos.

WSDA staffers are in the process of deploying around 1,000 traps in the county. 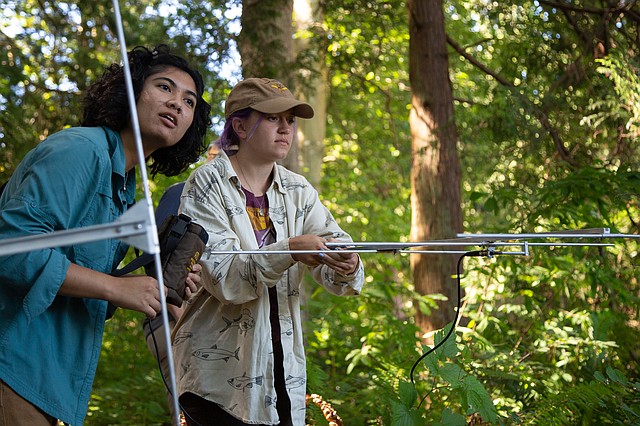 The traps, composed of recycled plastic bottles, orange juice and rice wine, take just a few minutes to put together, trappers said, but longer to examine.

“Our days consist of going through and checking traps every day of the week,” said Luke Turner, a recent Western Washington University graduate.

There are currently six trappers working for the WSDA, including Olivia Antonioli-Schmit, another recent WWU graduate.

“It only takes about 10 minutes to put the traps together,” Antonioli-Schmit said. “When we check them, we have to dump the contents of the trap into strainers and use a little spatula to look through all the dead bugs we caught.”

The homemade traps are easy to create and allow citizen scientists to help the WSDA track hornet sightings. 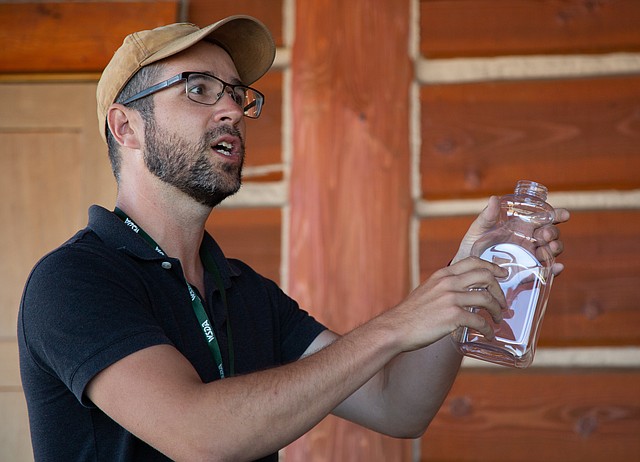 Nathan Roueche holds a plastic bottle with a hole cut in the side that is used to trap Asian giant hornets. (Hailey Hoffman/Cascadia Daily News)

“Citizens have recognized about half of the confirmed sightings we have of the hornets,” said Cassie Cichorz, an outreach and education specialist with WSDA.

Inslee has been supportive of the citizen science program, which WSDA is calling “adopt a wasp” this year.

“Citizen involvement has been super,” he said. “People have reported these things every time they see them.”

During the training session, entomologists and pest specialists from WSDA taught attendees how to make homemade traps for hornets and walked them through how the hornets are tracked once they're identified.

To track the hornets, entomologists tie tiny tags that transmit radio frequencies around the waist of the hornet using Kevlar strings. Then, using massive antennas, they can track the frequencies to nests and eradicate the population with a powerful vacuum. 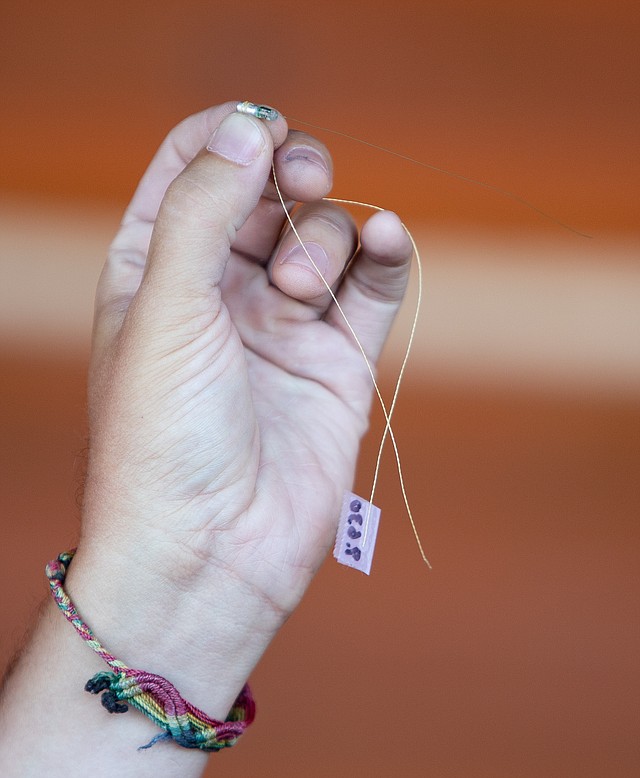 Asian giant hornet pest biologist Nathan Roueche holds up a tiny tracker that the department attaches to hornets they capture alive. Once attached, trappers are able to locate the nests and eradicate them. (Hailey Hoffman/Cascadia Daily News)

Part of the problem with immediate eradication, though, is there's very little research the WSDA can do once the hornets are killed.

“We have a number of research questions that we really just can't answer here,” said Sven Spichiger, WSDA managing entomologist. “Whenever we have a nest here, we have to kill it. We can't have a live queen and just release it; that goes counter to everything the program is supposed to do.”

Spichiger recently returned from a research trip in South Korea, the suspected source location of Washington's Asian giant hornets. The hornet populations in South Korea are overwhelming but allowed Spichiger and his team to do significant research during their three-week trip.

“We'll be able to start getting dispersal information, and that is something nobody has figured out in a couple hundred years,” he said. “It's a key piece of information that everybody has been missing.”

Typically, Asian giant hornets will start to emerge from their nests around August, so Whatcom County residents should pay close attention to local bee colonies. Locals can participate in the WSDA's “adopt a wasp” program by reporting on local paper wasp nests around their property throughout the summer.

“This is a new world, with an international economy,” Inslee said. “These invasive species are becoming more and more of a problem, so our state has to up its game. We have to be more aggressive. We have to do better research.” 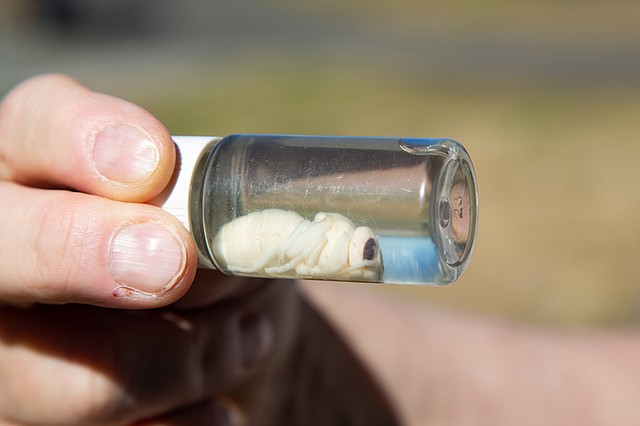 An Asian giant hornet larva is preserved in a glass jar by the Washington State Department of Agriculture. (Hailey Hoffman/Cascadia Daily News)

Washington residents can report Asian giant hornet sightings to the WSDA using a Hornet Watch Report Form, via email to hornets@agr.wa.gov or via phone at 800-443-6684.