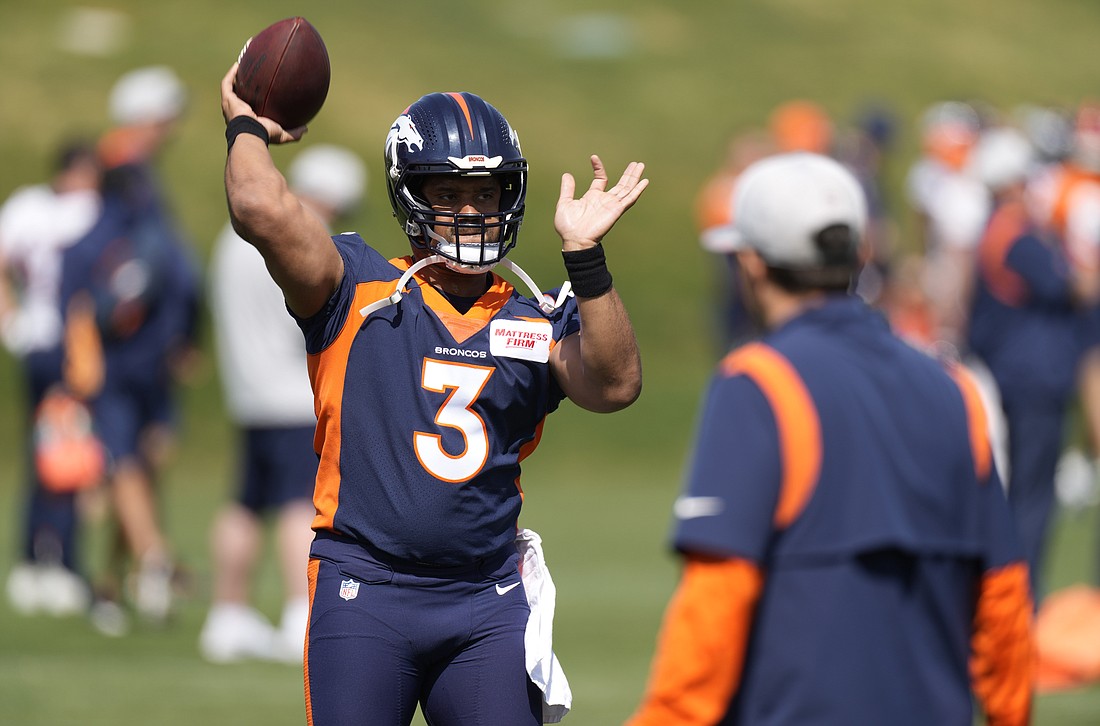 From Russell Wilson playing his first game as a Bronco in Seattle to Doug Pederson vs. Carson Wentz, the NFL schedule is filled with spicy matchups from the outset. Too bad we have to wait four months for it all to begin.

And it should begin with a bang.

The Seahawks prospered like never before with Wilson as their quarterback for the last decade, including a Super Bowl title and another they should have had if not for some, uh, curious play calls in the 2015 game. They rewarded Wilson's desire to go elsewhere with a monster trade this offseason and he landed in Denver.

Now, thanks to the NFL's desire to play off such storylines, the opening Monday night game of the 2022 season sends Wilson and his new team back to his old stomping grounds.

“I think he’s gonna be kind of excited,” new Broncos coach Nathaniel Hackett said Friday. "I mean, I think it’s a really interesting game to put right there on Monday night. But I’m glad we’re doing it early ... because that was going to happen at some point in the season. So I mean, hey, let’s attack it. You know, let’s all get into it. Let’s all rally around the Broncos and let’s get ready to go in there in a hostile environment and have a good game.”

Want more? In Week 1 alone, there's the kickoff game on Thursday night, Sept. 8, with the Super Bowl champion Rams hosting the current favorite to win it all, the Bills. There's Jacksonville, with recently hired coach Doug Pederson, at Washington and new QB Carson Wentz. In 2017, Wentz seemed headed for league MVP honors working under Pederson for the Eagles. Wentz was injured late in the schedule and Nick Foles took over. Pederson and Foles beat New England and Tom Brady for the title.

Speaking of Brady, he led Tampa Bay, as the defending champ, to a tight victory over Dallas in the 2021 opener. This year, the first Sunday night contest has the Bucs at the Cowboys. Very tasty.

As for the remainder of the 18-week schedule, here are some other confrontations that should whet your appetite.

Amazon Prime Video debuts as the Thursday night outlet for the NFL with Kansas City hosting the Chargers. The AFC West figures to be the best division, and each team could make a statement here.

The sport's oldest rivalry is renewed on Sunday night with Chicago at Green Bay.

When the Bills travel to Arrowhead Stadium, they or the Chiefs could make an early statement about AFC supremacy.

The Dolphins will celebrate the 50th anniversary of the NFL's only perfect season when they entertain the Steelers on Sunday night. Miami beat Pittsburgh in the AFC title game in the 1972 season.

Wentz again. His return to Indy, where he spent one fruitless season, as the Commanders take on the Colts.

The only reason we can figure out that this is a Thursday nighter is the prospect of Matt Corral of Carolina and Desmond Ridder of Atlanta being the starting QBs as rookies. Non-contenders in prime time in November?

And the first regular-season match in Germany, with Seattle against Tampa Bay. Oh yeah, Seahawks fans — this one kicks off at 6:30 a.m. PT.

San Francisco vs. Arizona on Monday night, mainly because it's at the iconic Azteca in Mexico City.

Except for the playoffs, what's better than a Thanksgiving football feast? Sure, we recognize the Lions being perennial doormats, but the tradition of them hosting the early game shouldn't be minimized. Not that we're saying they will test Buffalo.

The Giants at Dallas is the late-afternoon game, not particularly attractive unless New York has a turnaround season, but the Patriots at Minnesota in the nightcap is intriguing.

Will Deshaun Watson be available when Cleveland visits Houston? His status for 2022, even after the mega-trade that brought him to the Browns from the Texans, remains fuzzy with those civil suits for sexual misconduct pending.

Perennial All-Pro linebacker Bobby Wagner, as much a mainstay in Seattle as Wilson was, gets to face the Seahawks when his new club, the Rams, host them.

Plus, the Chiefs visit the defending AFC champion Bengals in a rematch of the 2021 conference title game.

The Ravens at the Steelers. Only because it is our favorite NFL rivalry, as intense and physical as it gets.

The Rams have the “pleasure” of playing a Monday night game at Lambeau Field. Bundle up, men.

More appropriate is a Christmas Eve prime-timer in which the Steelers host the Raiders and commemorate the Immaculate Reception that occurred 50 years ago. Hey Franco, great catch and run.

Enjoy these two: The SoFi Showdown as the Rams “visit” the Chargers in the spectacular stadium they share, and a Monday nighter between the Bills and host Bengals that figures to have significant implications in the standings.