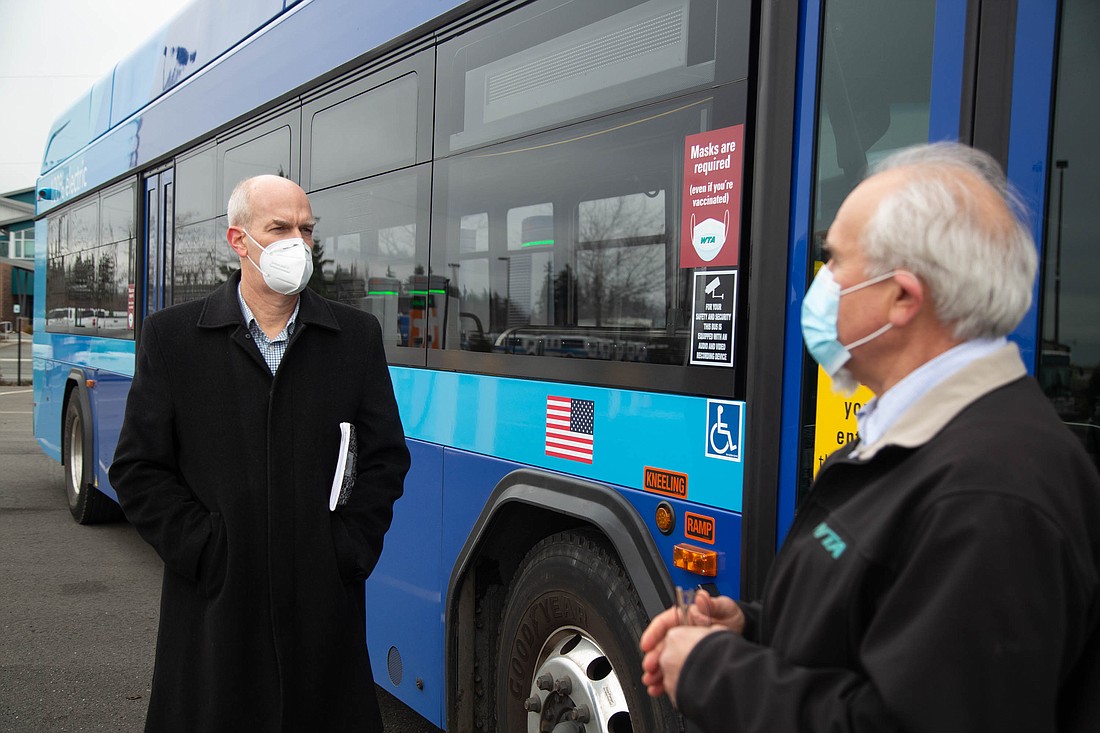 Whatcom Transportation Authority’s recent decision to buy eight new diesel buses has sparked concern from local Democrats, some of whom say the time is now to convert to zero-emission options.

What would have been seen in years past as a routine decision — replacing old buses with new — has become a political football at a time when climate change is a preeminent concern for one of the two major parties in this country. WTA’s bus order even got the attention of Democratic congressman Rick Larsen, who questioned the decision in a May 10 letter to WTA board chairman Michael Lilliquist.

“I hope you can help me understand WTA's recent purchasing decision,” Larsen wrote, in light of the agency’s “strong commitment to fighting climate change” and its “plan to invest in low/no-emission transit.”

Additionally, county-level Democrats have questioned whether WTA’s stated commitment to fight climate change isn’t just lip service. In a May 11 op-ed, party leaders including Andrew Reding, chair of the Whatcom Democrats, said the agency “can’t blah-blah-blah about their commitment to addressing climate change while voting for more diesel buses.”

“It’s time to demonstrate commitments through actions,” the op-ed stated.

WTA’s board of directors, which ordered the buses in March for delivery in late 2023, is aware of the apparent disconnect between its carbon-reduction goals and its decision to purchase diesel-powered vehicles that would contribute to the county’s carbon footprint until the end of their scheduled use in 2035.

In his response to Larsen, Lilliquist indicated that throwing the switch on WTA’s emissions-free future won’t be as easy as some people think, given the higher cost of electrics and the need for several new charging stations.

He also let the congressman know the purchase does not commit WTA to the diesel buses in 2023, and that the order can be revised at a later date to include zero-emission buses in place of diesel units.

“The WTA board decided to place an order for the new buses in time to lock in a lower price before scheduled increases, thereby saving a significant amount of money,” Lilliquist said in his letter to Larsen. At a March board meeting, WTA Fleet and Facilities Director Mike Bozzo said the agency would save more than $300,000 by placing the order by April 1.”

“WTA has adopted policies to support greenhouse gas reductions, and fleet electrification is a major strategy for implementing that goal,” Lilliquist added. “The recent board decision should not be taken as a step back from that goal.”

In an interview, Larsen said he wrote the letter to WTA after hearing “a few questions in the community about them buying diesel.”

WTA has two battery-powered buses in its 62-vehicle fleet. Two more are scheduled to arrive in January 2023. All four were purchased with state or federal grant money.

WTA will need to keep winning grants to purchase more electric buses, which cost about $1 million each — not including the necessary charging stations. Even the recent order for standard diesels, which cost about $600,000, is supported by a Federal Transit Administration grant that would cover 80% of the cost.

A recent FTA grant application was rejected, Anderson said, because Whatcom County’s air quality wasn’t poor enough. Even with the strike against it for clean air, WTA was in the 166 applications out of 303 total that got FTA’s top ranking as “highly recommended.”

This particular grant was highly competitive. FTA only awarded 70 in that round, meaning that more high-quality applications were rejected than approved.

Officials are optimistic about future grants, however.

Larsen said $2.34 billion in federal money will be available over the next five years for alternative-fuel buses. FTA’s Low or No Emission Grant Program is getting more than 10 times the amount of money it had to offer in the previous five years.

Larsen said he's also asking for a $2 million earmark for WTA in the next federal budget, to help the agency pay for its conversion to an electric fleet.

The state will also start chipping in more money, with $200 million now set aside for “green transit” grants as part of the 16-year Move Ahead Washington transportation package the Legislature approved in March.

Lilliquist, speaking in his letter to Larsen as just one member among nine on the WTA board, said he sees a clear path ahead to WTA’s transition away from diesel. WTA will start formally planning for that transition in the coming months.

“Personally, I am quite optimistic,” Lilliquist wrote.

“I think it is fair to say that most if not all board members are supportive (of electric buses) to a degree, and also that all members want to ‘see the numbers’ before we decide,” Lilliquist said in his letter to Larsen. “I think you’ll acknowledge that’s good process.”