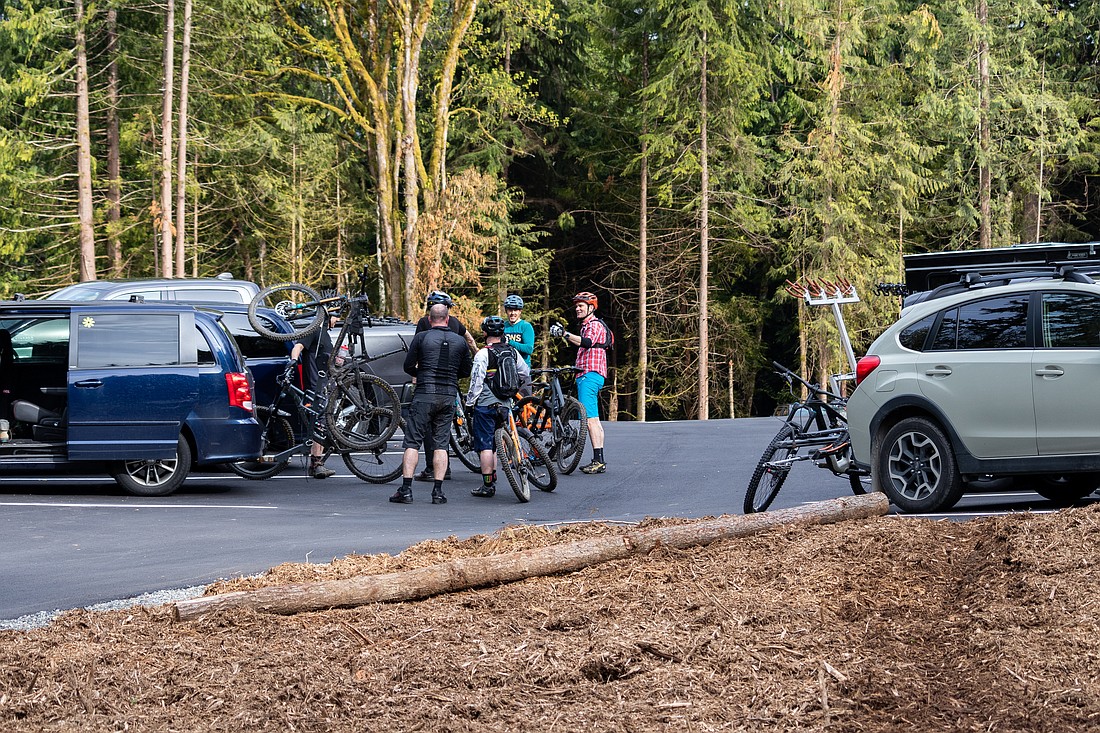 A group of mountain bikers return to their cars at the new parking lot after riding trails at Galbraith Mountain. (Kyle Tubbs/Cascadia Daily News)
By KYLE TUBBS
Staff Reporter

The new Galbraith Mountain South Side Parking Lot is now open. The city of Bellingham staff did a walk-through final inspection Tuesday and approved the opening for public use to the surrounding recreation sites like Galbraith Mountain, Lake Padden Park and Lake Padden Golf Course. The project has been in the works for roughly five years when Whatcom Mountain Bike Coalition (WMBC) Executive Director Eric Brown began discussing the need for a parking lot with former city of Bellingham Parks Director Leslie Bryson.

The paved parking lot has 184 large parking stalls that accommodate large vehicles as well as a gravel parking area for horse trailers. The parking lot also has porta-potties, a map kiosk and trail access into Lake Padden Park. The Bellingham Parks and Recreation Department are currently in the process of completing the signage, maps, kiosks and adding concrete picnic benches. The city also plans to improve trail access to the nearby trails for multi-use recreational purposes. 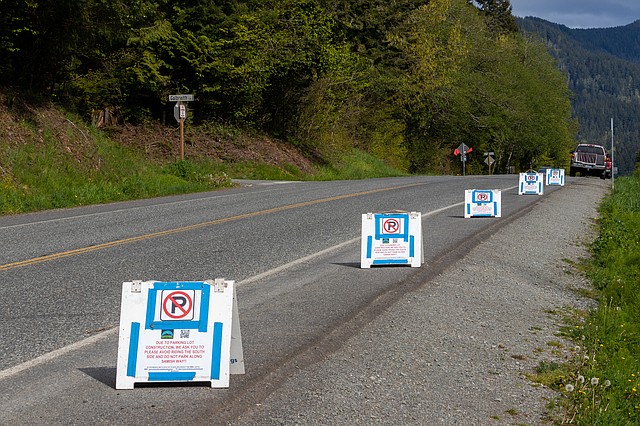 The Whatcom Mountain Bike Coalition put up signs blocking an area on Samish Lane that was a popular place for mountain bikers to park. The cars parked on the small shoulder often obstructed the view of pedestrians and vehicles. (Kyle Tubbs/Cascadia Daily News)

Bellingham Parks and Recreation Director, Nicole Oliver, said the WMBC  approached the city with the idea to build the parking lot in the location of the old parking lot within Lake Padden Park. The old gravel parking lot was originally created by the equestrian community but as mountain biking became more popular, the small parking lot began to fill up over time and the need outweighed what was available.

“So, it was a big contemplation of, you know, transforming a forested park into a parking lot that we did not enter into that lightly,” Oliver said. “We went to our park board and had quite a few discussions about it and tried to figure out if there were any other spots on the mountain, on private property, that could be a better location because of the difficulty in crossing the highway there.”

The city of Bellingham then worked with Whatcom County and got them to agree to improve the crossing of Samish Way. Oliver said the county has since reduced the speed limit to 25 mph and added flagging to the area where most visitors cross the road toward Galbraith. The timeline is still up in the air about the exact date a crosswalk will be implemented but Oliver said they are aiming to implement it in 2022 or 2023.

“We have about 20 afterschool bike clubs with about 450 kids in those programs,” Brown said.

Due to the number of regular visitors along with these clubs, Brown said he wanted to ensure the parking lot would have the space to accommodate traffic on most days. 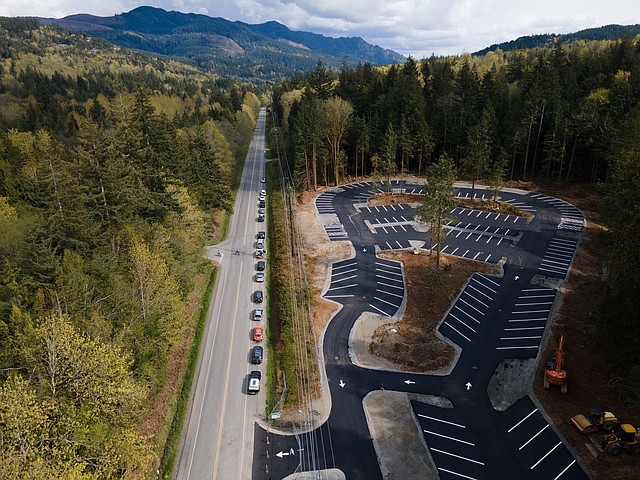 Galbraith’s new south side parking lot completed construction and opened to the public on May 13. (Hailey Hoffman/Cascadia Daily News)

In 2018, the City of Bellingham combined with Whatcom Land Trust secured recreational and conservation easements on Galbraith Mountain for a total of $3 million. The easements ensured the permanent use of 65 miles of trails on Galbraith as well as prohibited any commercial, residential or industrial developments.

The Bellingham Parks and Recreation department contributed the swath of land for the parking lot project after an agreement was met between the WMBC and the city following the easements. The WMBC raised the $606,000 needed to construct the parking lot and sourced the work from local partners. The city coordinated plans for zoning, proper stormwater dispersion and recommendations by the city arborists for tree removal and preservation.

The project required removing more trees than they originally planned for, however, plans are in place for the Whatcom Million Trees Project to return in the fall and plant trees around the completed site.

The parking lot is now an asset of the city, and it will manage the upkeep of the parking lot and plans to add other future amenities like electric charging stations and light poles.