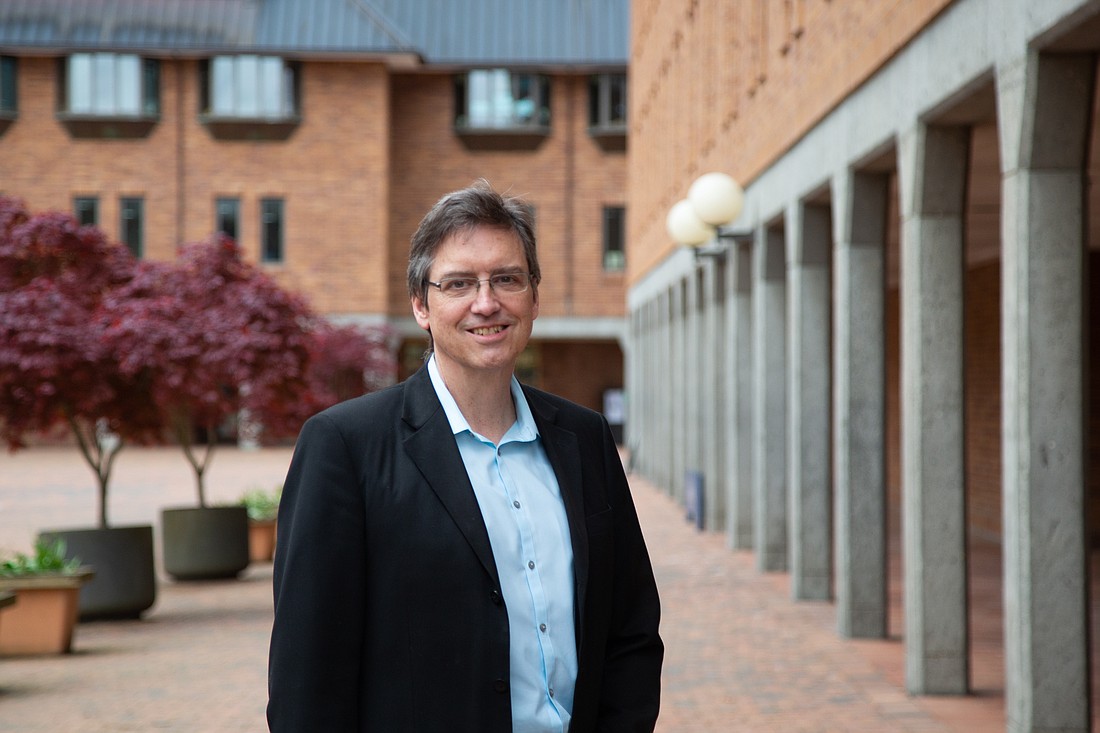 Western Washington University selected Brad Johnson as the new provost starting this summer. Johnson is the current dean of the College of Science and Engineering and has worked at the university for more than 20 years. (Hailey Hoffman/Cascadia Daily News)
By HAILEY HOFFMAN
Staff Reporter

As Western Washington University works to hire several new administrators amid retirements and job changes, the university looked internally to promote Brad Johnson — the current dean of the College of Science and Engineering — to take over as provost of the university.

“I'm incredibly humbled to be given this opportunity,” Johnson said. “I'm both excited and a little nervous.”

As the vice president of academic affairs, he will lead the deans of the university's seven colleges and will be responsible for academic planning and policy, budgets and research. The job also oversees the university libraries, information and technology, international programs, the honors program and other extended education programs.

He said his decision to apply was based off the belief that the university would be better off with some sense of continuity in the wake of many changes. As a professor and administrator since 1997, he decided he was suited for the role and stepped up.

Johnson started as a physics professor and moved his way up the ranks, serving as department chair, associate dean and dean for the last five years. He's served on Western's Faculty Senate and the University Planning and Resource Council and has been active in large-scale university projects, like sourcing private funding for the new computer science and engineering building on campus. Johnson also was instrumental in integrating Western's Accessibility, Diversity, Equity and Inclusion structure which aims to create accountability for the university on its mission to make the campus community welcoming to all.

“Getting to see this institution from many points of view is going to be helpful,” Johnson said. “Having a lot of those experiences in lots of different areas gives me a background.”

Despite his deep experience with the university, Johnson said he has a lot to learn before taking on the role this summer. First up, he's working with the provost office to learn the ropes of the job. He also plans to follow up on conversations he had during the interview process and to connect with the other vice presidents.

Once in the role, he hopes to hit the ground running and establish more regional connections and grow partnerships to not only benefit students and graduates, but benefit the larger community as well.

“How do we find areas of common strategic overlap? We look for places where there's overlap, so that there's a mutual benefit to having a supportive relationship,” he said.

Above all, Johnson hopes to create a collaborative and supportive environment for students and faculty. He is open to change and wants to build relationships to promote communication.

“A university is its people,” he said.

Johnson will begin his role this summer, taking over for current provost Brent Carbajal, who has been in the role since 2013, is retiring after 25 years with the university.

A previous version of this story incorrectly stated the length of time Brent Carbajal was provost. The story was updated to reflect his change on May 12, 2022, at 1:05 p.m. The Cascadia Daily News regrets the error.