Western Washington University’s Lauren Lo makes a running catch in the outfield as the Vikings took on Saint Martin’s during a game on April 29. (Andy Bronson/Cascadia Daily News)
By HAILEY PALMER
Staff Reporter

The Western softball team will open its postseason run against a familiar opponent.

The Vikings just wrapped up a weekend series with Saint Martin’s University and will meet the Saints again Thursday on the opening day of the Great Northwest Athletic Conference tournament.

The tournament will be held at Central Washington University in Ellensburg.

With a 29-22 overall record and 15-9 record in the conference, the Vikings will be the No. 3 seed in the GNAC tournament.

Western, the defending tournament champions from 2021, will open this year’s tournament at 10 a.m. Thursday against No. 2 seed Saint Martin’s.

The Vikings have played the Saints six times this season and have a 4-2 record against them. This last weekend the teams split the series, each with two wins and two losses.

Northwest Nazarene University earned the top seed in the tournament after claiming the regular season GNAC title for the second year in a row. The Vikings were 3-5 against the Nighthawks in the regular season.

Central Washington University will be the fourth and final seed in the tournament.

Western pitching ranks second in the GNAC with a 3.15 earned run average and third in hitting with a team .294 batting average.

Western Washington University’s Tatum Dow watches the ball after a hit as the Vikings took on Saint Martin’s during a game on April 29. (Andy Bronson/Cascadia Daily News)

The Vikings will look to keep riding the strong pitching and hitting that has gotten them this far this season.

Heading into the tournament, the Vikings are led on offense by five hitters with a .300 batting average or better.

Senior Chantelle Shimabukuro leads the team with a .384 average. Dakota Brooks isn’t far behind with a .369 average, and Tatum Dow fits right in with a .333 average. Lauren Lo and Rylie Wales round out the top five with batting averages of .304 and .300. 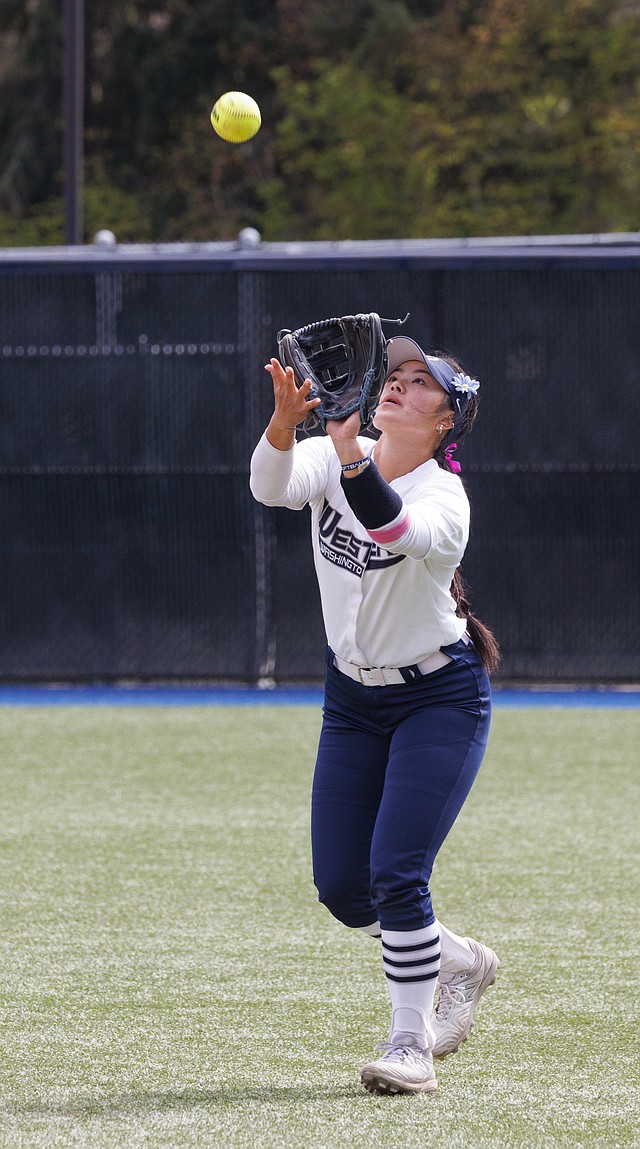 Sophomore Sydney Brown and senior Kira Doan have been pillars for Western in the pitcher’s circle with earned run averages of 2.26 and 2.57. Doan leads the team with 99 strikeouts this season and Brown has punched out 88.

Playing again less than a week later and for the seventh time this season, there aren’t many secrets left between Western and Saint Martin’s.

In the most recent meeting, the Vikings and Saints battled to a split series. Brown and Doan combined to only allow one run in the first doubleheader. Saint Martin’s took game one 3-2 and Western took game two 6-1.

The second doubleheader was played Sunday with the Vikings and Saints each notching one win. Western won the first game 4-0 with Doan throwing a complete-game shutout but dropped the second 8-3 to close out the regular season.

The double-elimination GNAC tournament starts Thursday and concludes with the championship game Saturday. The winner of the tournament earns the GNAC’s automatic berth to the NCAA Division II Championships.

If the Vikings take the tournament title, they would advance to the NCAA Division II West Regional May 12-14. Location is yet to be determined. Falling short in the GNAC tournament would have Western hoping for an at-large bid or end its season.