Radicalism: Not a new foe to public education

We've failed to shine this light before 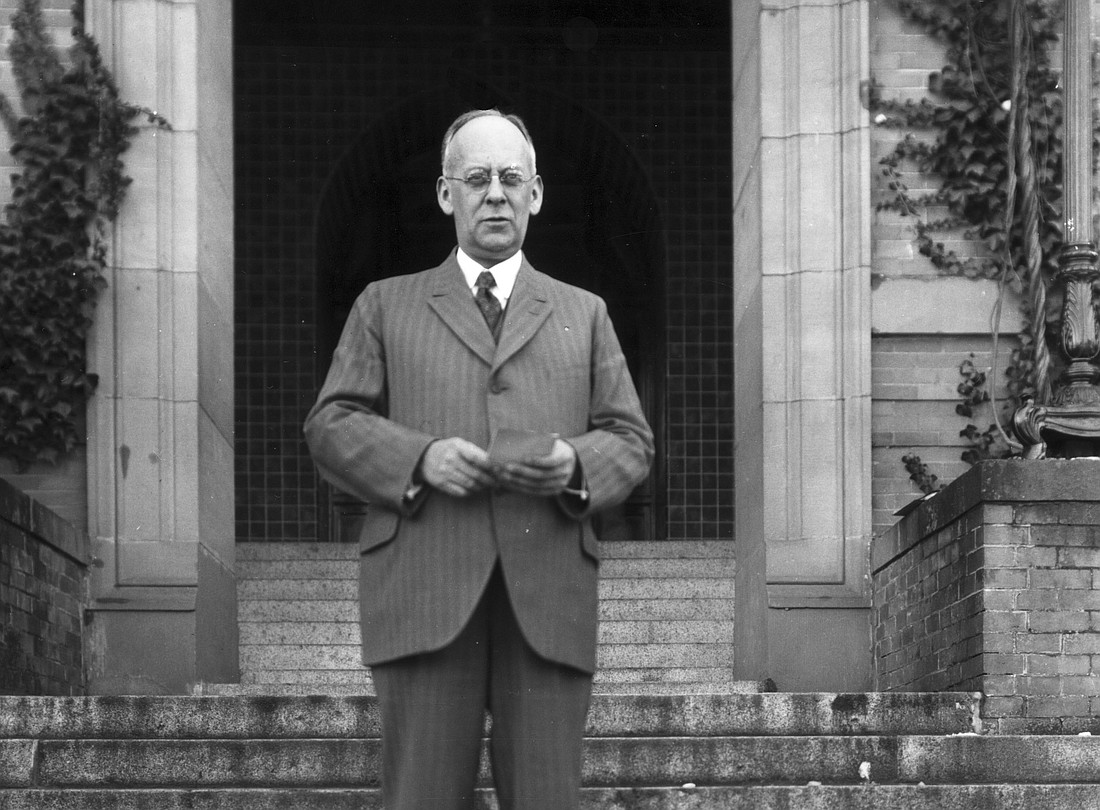 Charles H. Fisher, on the steps of Old Main, 1933. He might have recognized some of those folks storming local school boards today. (Photo courtesy of Special Collections, WWU)

The citizen standing up front had issues. He wanted them addressed.

You people in the schools, he told board members at a nighttime Bellingham meeting, are poisoning the minds of our innocent children.

You’ve blurred the lines between boys and girls, church and state, God and country, and God knows what else.

Kids enter school doors as good Christians and come out as doubters. Minds have been poisoned. We see the plan: You’re selling out a once-great nation.

None of this “seditious” activity, said the citizen, backed by a small group of harumphing male supporters, was counterbalanced by appropriate inoculating doses of “patriotic” education.

And at the end of this bile-dripping screed came a direct threat: It will stop, it will stop now, or you’ll all be out on your ears.

Fighting back — a bit

Board members, and the school’s chief administrator, argued forcefully back at the rump group of citizens assembled in the room, one of whom was a self-proclaimed white nationalist, one a local doctor, one a minister.

We don’t indoctrinate your kids, we open their minds, the administrator said. What they do with what we present is up to them.

“You see, we take all this Constitution, American government and patriotism for granted,” the administrator said. “Their fundamental ideas are fixed; they can’t be changed.”

The leader of the citizen’s group responded angrily.

“You do change them,” he said.

“We don’t try to change them,” responded the administrator, adding that the protestors simply didn’t give the students in question “credit for ordinary intelligence.”

The meeting went on for hours. It wasn’t at a local school board, in 2022, in Bellingham, Lynden, Nooksack Valley or Ferndale.

It was a spring night in May 1935, in what’s now Old Main at present-day Western Washington University.

History repeats, or at least rhymes

That night, a self-appointed conservative citizen’s group, slyly led by Bellingham Herald editor and political kingmaker Frank Sefrit, took a Red Scare-inspired case against college President Charles H. Fisher (the administrator in the above narrative) to the board of trustees of a then teacher's college.

The encounter, preserved via a stenographer’s account in local archives, pits two of our fair town’s more important historical figures against one another in a battle of wits for the ages. A few years back, I explored this in a historical study that tells a fascinating tale about life in Depression-era Bellingham.

What’s striking about it today is not just the lessons it offers about power, academic freedom, and the degree to which public education relies on an active, not passive, protection against extremist incursions.

It is how much the events here at home 87 years ago mirror those at home today.

The issues in the spotlight then were clear: education versus indoctrination and the role public education plays in establishing a common ground of understanding critical to American democracy.

Sefrit’s radical group, which included a self-professed Klansman, viewed mere mention of Communism, “free-love” and even foreign travel as an endorsement of the same.

Trade their itchy tweeds and woolens for some polyester, and these folks could easily be time-warped into a meeting place for a local school board almost anywhere in America in 2022, challenging the authority of public educators, accusing them of murky, imagined transgressions, and peddling innuendo.

These attacks on public school boards are being waged in meeting rooms all over the country, often with materials shared via social media.

Some groups pepper school districts with nuisance records requests and threats of personal liability over pandemic-related health rules, such as vaccinations or masks. Others make ridiculous claims about school board actions violating international human rights accords.

The motivations of these radical actors, of course, must be viewed in context. Sefrit’s 1930s henchmen were recoiling against what must have seemed an alarming slippage of their “tradition” and principles as America launched into uncharted social territory with the New Deal, and local governments became populated, for the first time ever, by progressives.

Today’s public-school assailants appear to be a dispersed, disaffected group of Americans who profess to yearn, ironically, for the same imagined golden age of U.S. homogeneity.

Fools, you might say. Because their arguments rarely hold up, they’ll fade back into the hole from which they emerged. Just like our forebears said back in the day, to some extent.

After that bizarre 1935 star chamber proceeding, the three-member board of trustees told Sefrit and his group where to stick their accusation that Fisher was a communist (he actually was an active Presbyterian, and what amounted to a common New Deal liberal.) They exonerated him fully and forcefully.

But their defiance was a tin artifice against an unceasing political gale. Sefrit and his minions pressed on, prevailing upon conservative Democratic Gov. Charles Martin for years to force the board’s hand. This, he did; Fisher ultimately was run out of town by the same board members, whose own roles were threatened by Martin, by the summer of 1939.

The official record of his shameful firing was later erased from the record of the college board of trustees — a disgrace that has never been corrected by heirs to those seats at today's Western.

It effectively ended the career of Fisher, a nationally known, progressive educator who was well ahead of much of the world promoting this thing we now know as a well-rounded, liberal arts education. The sting lingers on in his family, even several generations removed.

What’s the lesson for the rest of us?

Back to those archives: Once it became clear the get-Fisher effort had actually succeeded, and his career lay in shambles, a number of prominent Bellingham folks expressed shock, anger and deep regret, either at not knowing, or looking the other way.

One of them, in a 1939 letter after Fisher's departure, said something worth remembering:

Radicalism, the man said, shrinks in sunlight. The key to killing it is lifting the lid, exposing it early on, and standing strong against its earliest upshoots.

How odd and appropriate that today we find ourselves in a very different time, but exactly the same place.