Which bikes are OK on which trails? 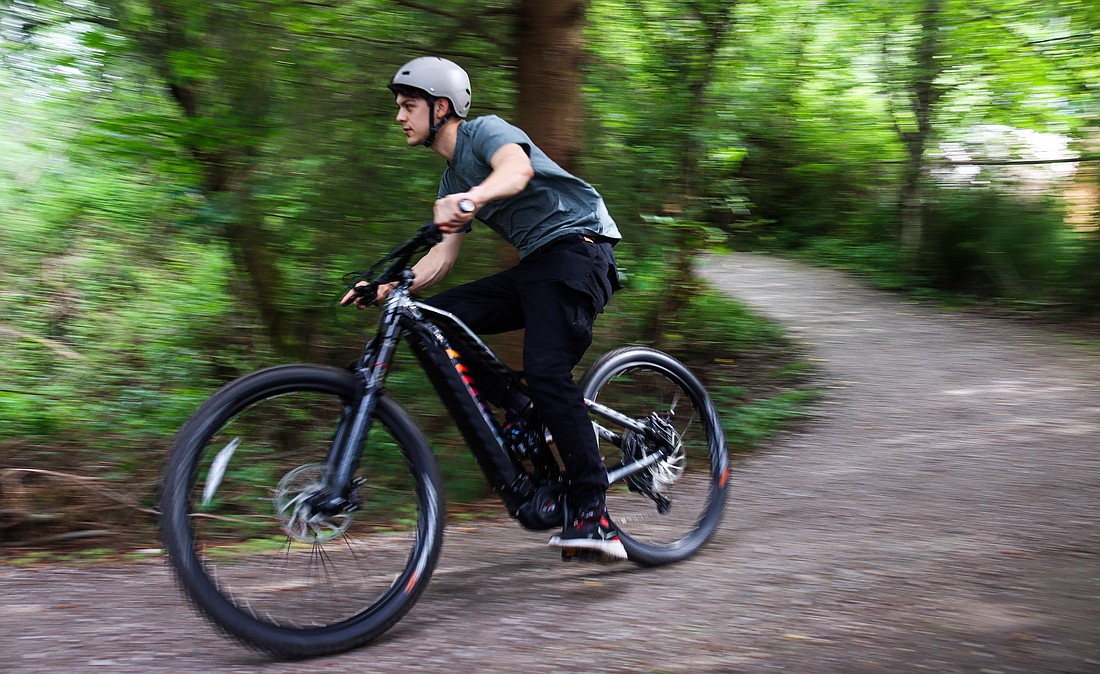 Michael Rodriguez rides an electric mountain bike on a trail in Fairhaven on June 4. This Seattle Electric Bike is designed to provide varying levels of pedal assistance depending on what the rider selects. (Kyle Tubbs/Cascadia Daily News)

Mountain biking began four decades ago with turf wars over trail access. The bikers eventually organized, joined the Olympics and avoided being banned from trails by going mainstream.

The advent of battery-powered bicycles has opened trails to people who could not physically pedal up challenging ascents by themselves, adding stress to oversaturated wilderness areas that people once sought for solitude.

As tensions rise, electric mountain bikes exemplify how innovation forces policy changes to the management of recreational use on public land and how factions on all sides have politicized it.

“At what point does it cut off?” Randy Rasmussen of Back Country Horsemen of America asked last month during a Washington virtual town hall meeting. “What new technologies are coming that we’d have to accommodate on traditional trails?”

As bike sales increased exponentially in the past five years, so did a push for more access, a situation being driven by bicycle manufacturers, said Bill Hasenjaeger, a Bellingham mountain biker and trails professional who helps write e-bike policies. 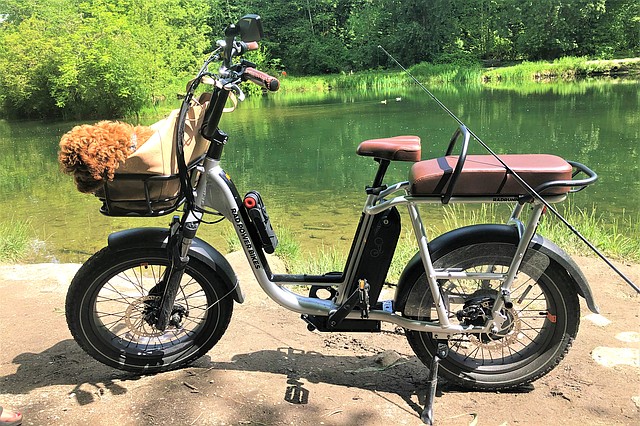 Australian Labradoodle puppy Yuki sits in the front basket of an electric bicycle owned by Anna Higgins of Bellingham on June 4 at Whatcom Falls Park. While commuter e-bikes like this one are generally welcomed, others made for mountain biking have led to tension over access to single-track trails. (Photo by Elliott Almond)

He said industry lobbyist Peopleforbikes did not advocate for mountain bike access “until the e-bike thing started to happen.”

The advocacy has spawned all kinds of support groups, such as the Orange County-based Electric Mountain Bike Association, which in 2017 started an online petition citing age discrimination to get more trails open.

Last year Washington state lawmakers mandated that the Departments of Fish and Wildlife and Natural Resources solicit public and tribal input on the use of eMTBs on their non-motorized trails and roads open only to conventional bikes.

Agency representatives held two virtual meetings in May that drew about 150 participants. The opinions ranged from demanding an outright ban on using single-track trails to treating all classes of eMTBs like regular mountain bikes. Most of the participants supported more access.

Electric mountain bikes, which can cost more than $10,000, are grouped into three classes. But they all must have motors that cut off above a certain speed and can produce no more than 750 watts or about one horsepower.

Fish and Wildlife and DNR currently permit people with an American Disabilities Act placard to take Class 1 or Class 2 eMTBs on the same trails as those riding conventional mountain bikes. The rules will remain in place through June 2023 or until a new policy is adopted.

The agencies also have received almost 4,000 responses from a survey on eMTB use.

“This is clearly an issue that many are passionate about, for a variety of reasons,” said recreation planner Heide Andersen of Fish and Wildlife.

Andersen is searching for commonalities among the varied interests that will lead to sound policy decisions.

“It becomes a microcosm of what's going on out there in terms of recreation, across the population and changes in demographics,” she said.

The agencies’ report that is due in September will not make policy recommendations. Washington state lawmakers adopted a policy in 2018 that classifies e-bikes as bicycles. The law also states that all non-motorized single-track trails are closed to eMTBs on state property unless permitted by the local land manager with posted signs. 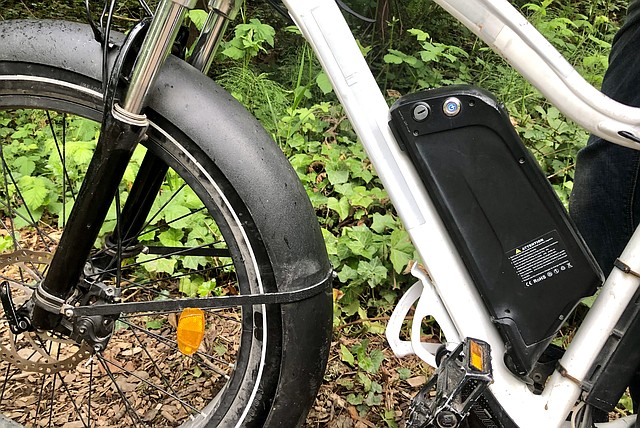 The battery on the Rad bike of Jake Craft, 36, of Bellingham, is connected to the eMTB’s frame. Electric mountain bike sales are skyrocketing as more older people gravitate to the machines to stay active, according to industry representatives. (Photo by Elliott Almond)

But regulatory agencies have not built a universal framework to address the issue for cities, counties, and various state and federal agencies across America.

The National Park Service allows Class 1 e-bikes on trails that permit regular mountain bikes. The U.S. Forest Service classifies all e-bikes as motorized vehicles that must follow the same guidelines as other vehicles.

In Whatcom County, where mountain biking is considered a signature recreational activity, enthusiasts must be fluent in a patchwork of rules and regulations.

“You can pedal from the Two Dollar Trail onto the Interurban Trail, and you're breaking the law,” he said of traveling from DNR-run land to a county pathway in the Chuckanut area.

Whatcom County prohibits e-bikes other than on designated roads and parking areas.

Bellingham’s renowned Galbraith Mountain is a model for managing access through an agreement with the city of Bellingham, landowner Galbraith Tree Farm and the Whatcom County Mountain Bike Coalition.

But the parties face questions over eMTBs, which currently are not allowed on Galbraith trails. However, the rule is not being enforced, according to the coalition’s website.

The website said coalition leaders are discussing the use of eMTBs with the Bellingham city attorney, including allowing riders with disabilities e-bike trail access.

The coalition outlined some of the pertinent questions to consider:

The second question was easy to answer for Todd Elsworth, executive director of Bellingham advocacy group Northwest Recreation: “There are not going to be bike cops back there writing tickets.”

“We don’t need e-bikes on some trails,” he said.

Most of the opposition focuses on single-track trails, where many worry that motor-assisted bikes allow inexperienced riders to go farther and faster into the backcountry and impact the environment.

Some also say the mechanism to limit the battery-powered speeds can easily be manipulated, rendering the classifications useless.

Rassmussen, director of public lands and recreation for the Back Country Horsemen, said manufacturers should help fund, design and build trail systems for eMTBs as they promote more access.

Andersen, the Fish and Wildlife recreation planner, continues to search for ideas that will satisfy constituents while also protecting the land.

“I feel like there's a long way to go to try to find that sweet spot,” she said.