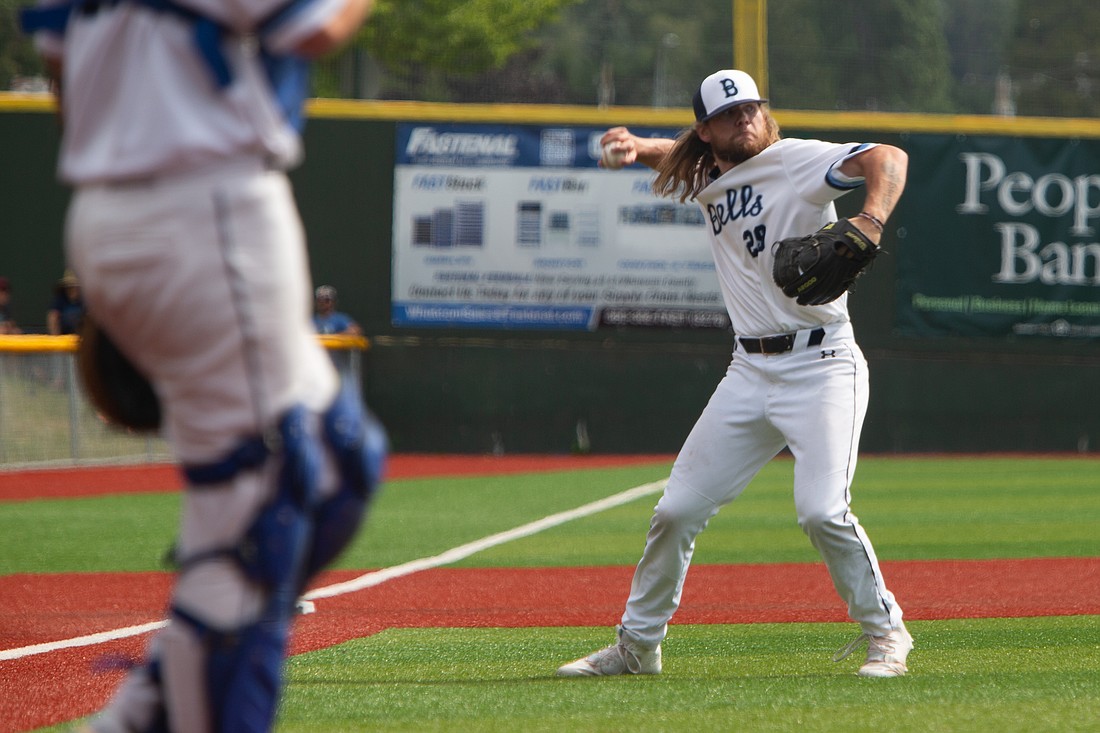 Bellingham Bells pitcher Aidan Rodell throws the ball to first base for an out during a home game against the Kelowna Falcons on July 24. The Bells lost 11-6 in 14 innings. (Hailey Hoffman/Cascadia Daily News)
By HAILEY PALMER
Staff Reporter

Bellingham had the brooms and was looking for a sweep heading into its game home Sunday against the Kelowna Falcons.

For about two-thirds of the game, the Bells were in the driver's seat holding a 3-0 lead in hopes of securing their third-straight win.

A seventh-inning rally and eventual 14th-inning outburst by the Falcons dashed Bellingham’s chances at a three-game sweep as Kelowna pulled ahead and hung on for the 11-6 win in 14 innings.

Bellingham struck first in the game on a two-run home run by right fielder Easton Amundson. Scoring with Amundson on the home run was left fielder Kyle Parkman who had reached on an error to lead off the first inning.

Walks to the next four Bells’ hitters brought in another run, with shortstop Ty Saunders picking up the RBI, as Bellingham’s lead increased to 3-0 in the bottom of the first inning.

The Bellingham offense was held to just one hit after the first inning until the seventh when Parkman singled to lead off the inning. By that point, the Bells were trailing 4-3 following a four-run seventh inning by the Falcons.

Amundson doubled in the next at-bat, putting runners on second and third. An RBI single from designated hitter Malcolm Moore tied the game at 4-4, where the score would stay until extra innings.

Bellingham interim head coach Haydan Hastings said they got a little too far ahead of themselves when they had chances to score more runs late in the game.

“Sometimes, maybe, we got a little too big and tried to do it in an at-bat too soon, and it was just a matter of passing the baton to the next guy and not trying to be a hero,” Hastings said. “Let the next guy do it and I think we just got a little bit outside of our plan.”

Playing five extra innings fell outside of the plan, as well.

Kelowna broke the deadlock in the top of the 13th inning with two runs, but Bellingham responded in the bottom half of the inning. An RBI double from Parkman and RBI single from Moore tied the game at 6-6 and sent the game to yet another bonus inning.

After issuing walks to the first two batters in the top of the 14th, Bellingham made a pitching change, pulling infielder Jace Phelan from his spot at first base and onto the mound.

“He’s thrown quite a bit any time things start to get done,” Hastings said. “We have a long road trip out to Canada Tuesday through Sunday, so we’ve got to save our pitchers for them.” 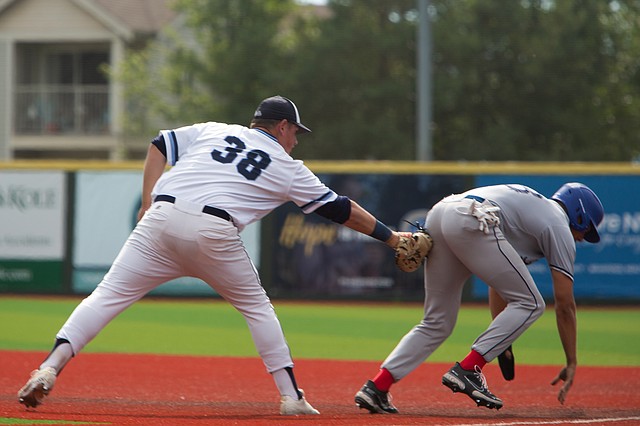 Bellingham's Jace Phelan picks off a Falcon runner at first base. Phelan later pitched in the 14th inning of the Bells' 11-6 loss to the Falcons. (Hailey Hoffman/Cascadia Daily News)

Five hits and five runs later, the Bells trailed 11-6 heading into the bottom of the 14th inning.

With the long road trip ahead of them this week, Hastings also gave his starting pitchers some batting practice to close out the game.

“That wasn’t just throwing in the towel, those guys have worked hard for us all year and they’ve thrown four or five shutouts for us,” Hastings said. “Every time they throw a shutout I promise them pitchers’ batting practice and I haven’t owned up to that, so they were kind of grilling me to give them an [at-bat].”

Bellingham enters the second-to-last week of the regular season at 27-14 overall with a playoff spot already locked up.

Having that playoff spot already in the bag makes it a little harder to focus on the present and not the future.

“It’s going to be difficult to stay locked in because I think we’re so looking forward to the playoffs that, with games like this, it’s easy to kind of overlook and look toward the next game,” Hastings said. “It’s important to stay locked in and treat each game with the importance it deserves.”

Bellingham’s road trip in Canada will begin at 6:35 p.m. Tuesday against the Nanaimo NightOwls.