Bold and buoyant: the open-water swimmers of Bellingham

These brave souls take to Bellingham's wild waters year round 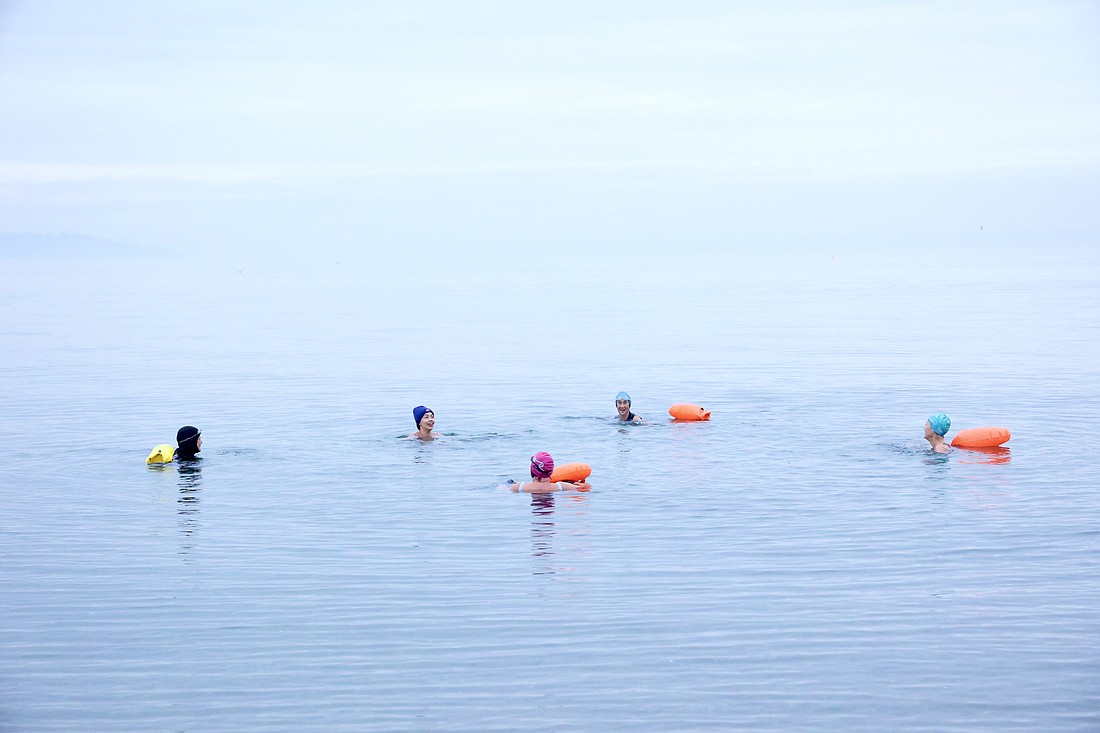 Kelcey Bates shed a full-length swim parka to expose a powder blue one-piece suit printed with cartoon stegosauruses and walked toward the glassy water one recent foggy morning at Marine Park with a half dozen other open-water aficionados.

The Fairhaven air temperature hovered near 47 degrees, the water 46.

“We’re all sleepy-faced now but wait until we get out,” said Bates, the heart and soul of a hardy breed of Bellinghamsters.

Bates, 63, slouched into the chilly water with the others, their bright orange and yellow swim buoys trailing behind them. 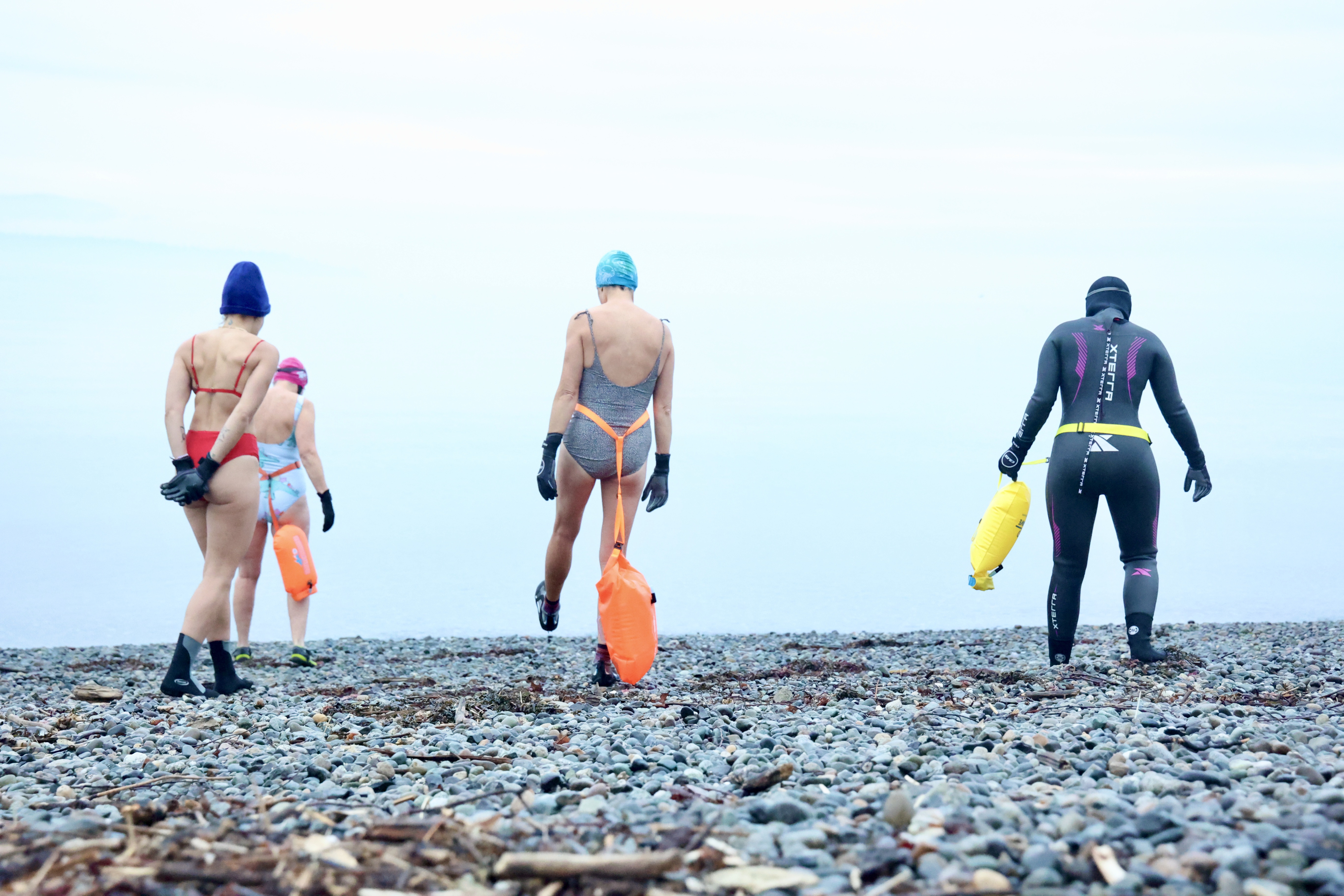 In a ritual that some practice throughout the year, hundreds of local swimmers like Bates have found their way to the shore to brave frigid waters and build a community.

“The water is so healing and makes you feel alive and rejuvenated,” said Olivia Gleser, 39, before she traipsed into the bay to join the others.

Fifteen minutes later, the group did handstands in the water before trudging back to shore. 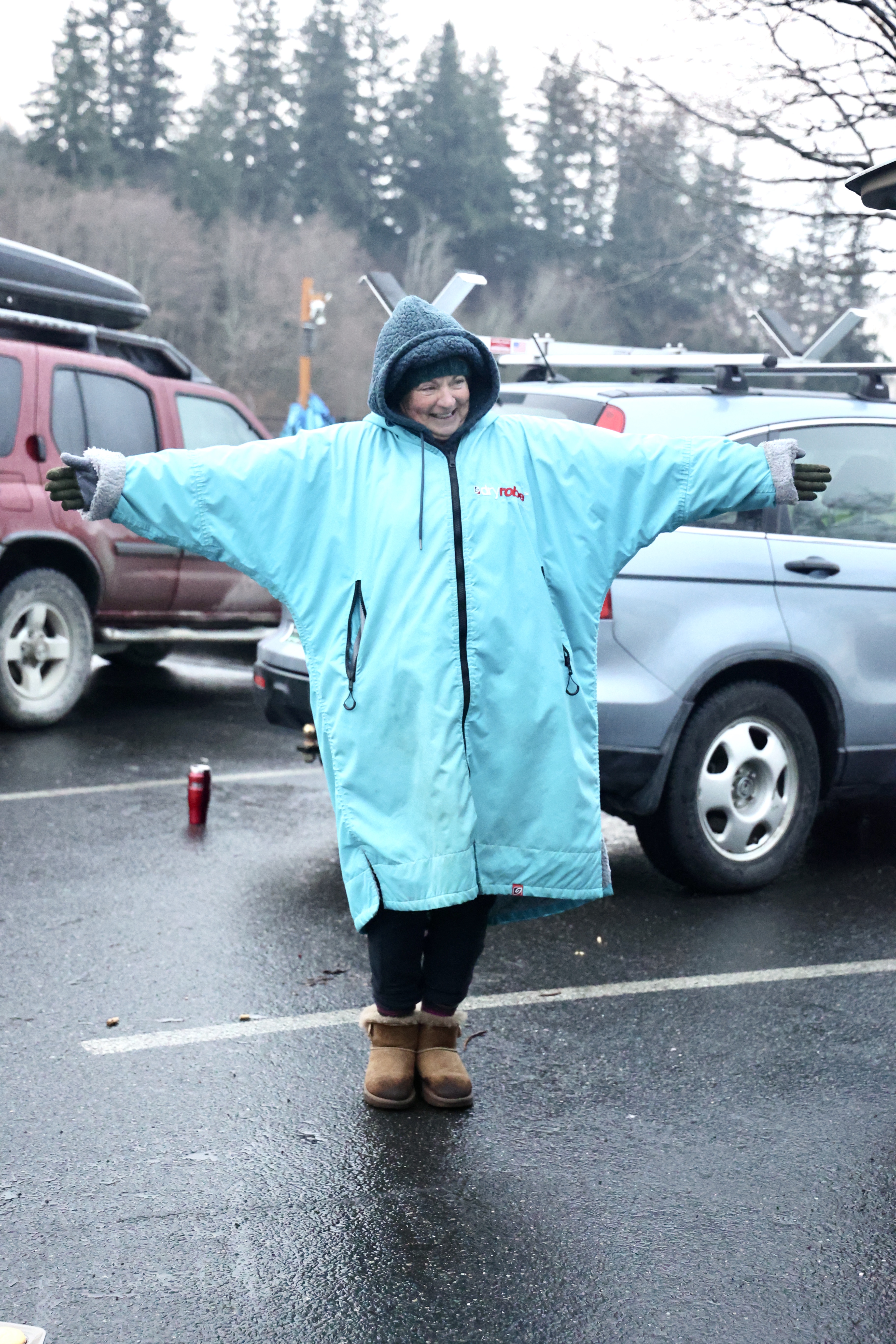 Kelcey Bates stands with arms outstretched as she and others warm up after their swim. (Victoria Corkum/Cascadia Daily News)

Bates, a self-employed artist who won Shifting Gears’ Wild Woman of the Year award in 2021, has been swimming in open water for 15 years. She delights in welcoming newcomers to the water and sharing its healing powers with all who wish to take the plunge. In late 2019 she founded the Bellingham Open Water Swimming Facebook group that unites the human polar bears among us.

While the sport of open-water swimming has grown exponentially since 1987 when Californian Lynne Cox famously swam across the Bering Strait between the United States and the then-Soviet Union, people have recognized the benefits of cold-water soaks for centuries.

“There are whole towns in the United Kingdom built up around the popularity of the Victorians going to take to the sea for health benefits,” said Michael Tipton, a leading expert on the body’s response to cold-water immersion. 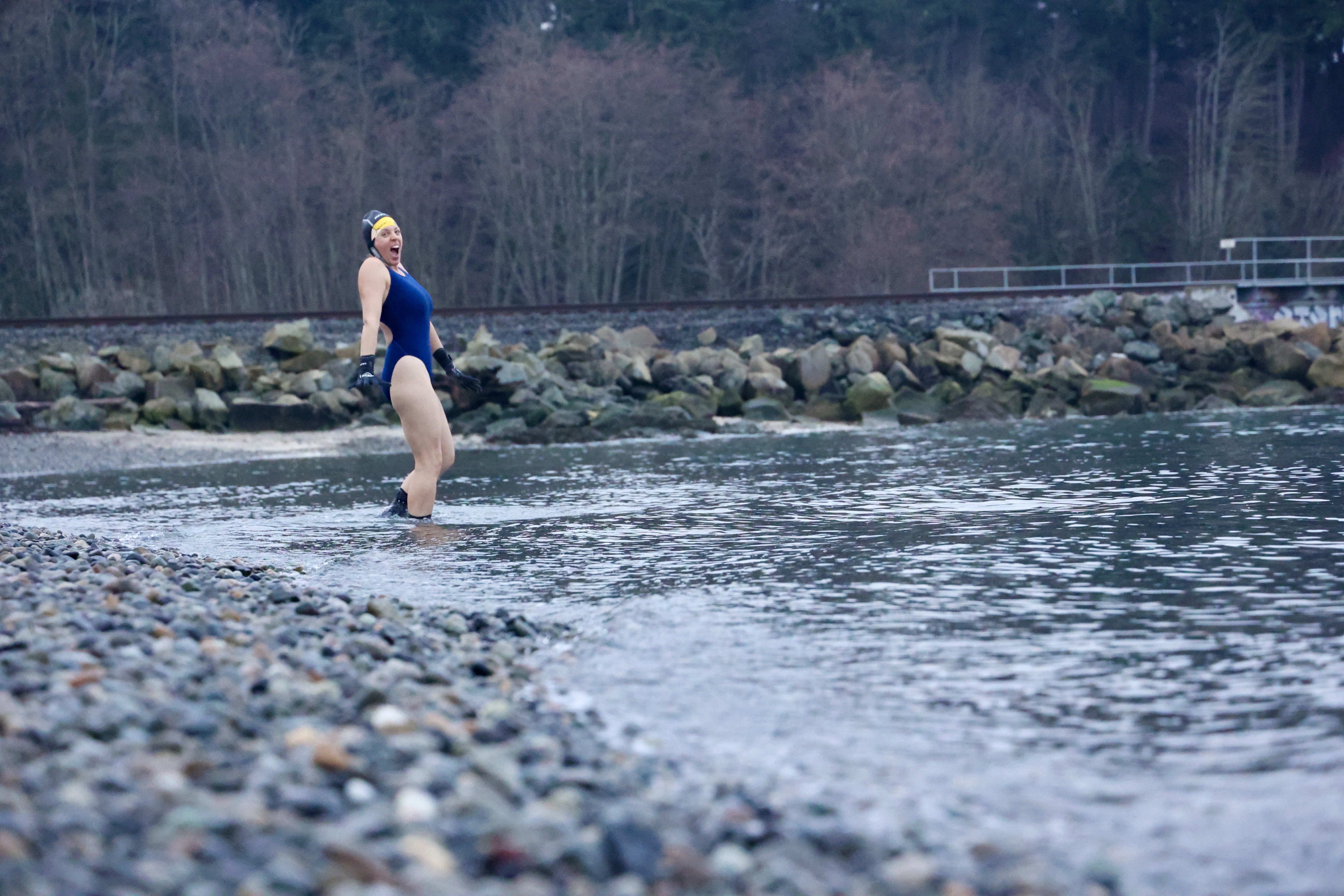 In addition to feeling alert and alive, Bates and others said they feel healthier and happier when they swim, especially during the gray months of winter.

The Bellingham Facebook group snowballed during the COVID-19 pandemic as people sought ways to socialize and exercise while keeping their distance. Six hundred of the group’s nearly 700 members have joined since summer 2020.

A boost for body and mind

Though the healing reset of cold water initially draws people to the bay, many are delighted to find a caring and supportive community when they arrive. Belonging and social time, along with physiological changes in the body, are part of the therapeutic benefits of open-water swimming, said Tipton, professor of human applied physiology at the University of Portsmouth in England.

When people gather for a swim “they're meeting other people, they're going into a beautiful environment, they're exercising, they're floating in water … and they're also getting cold,” Tipton said. “Any one of those things may be the active ingredient” in the activity’s health benefits. 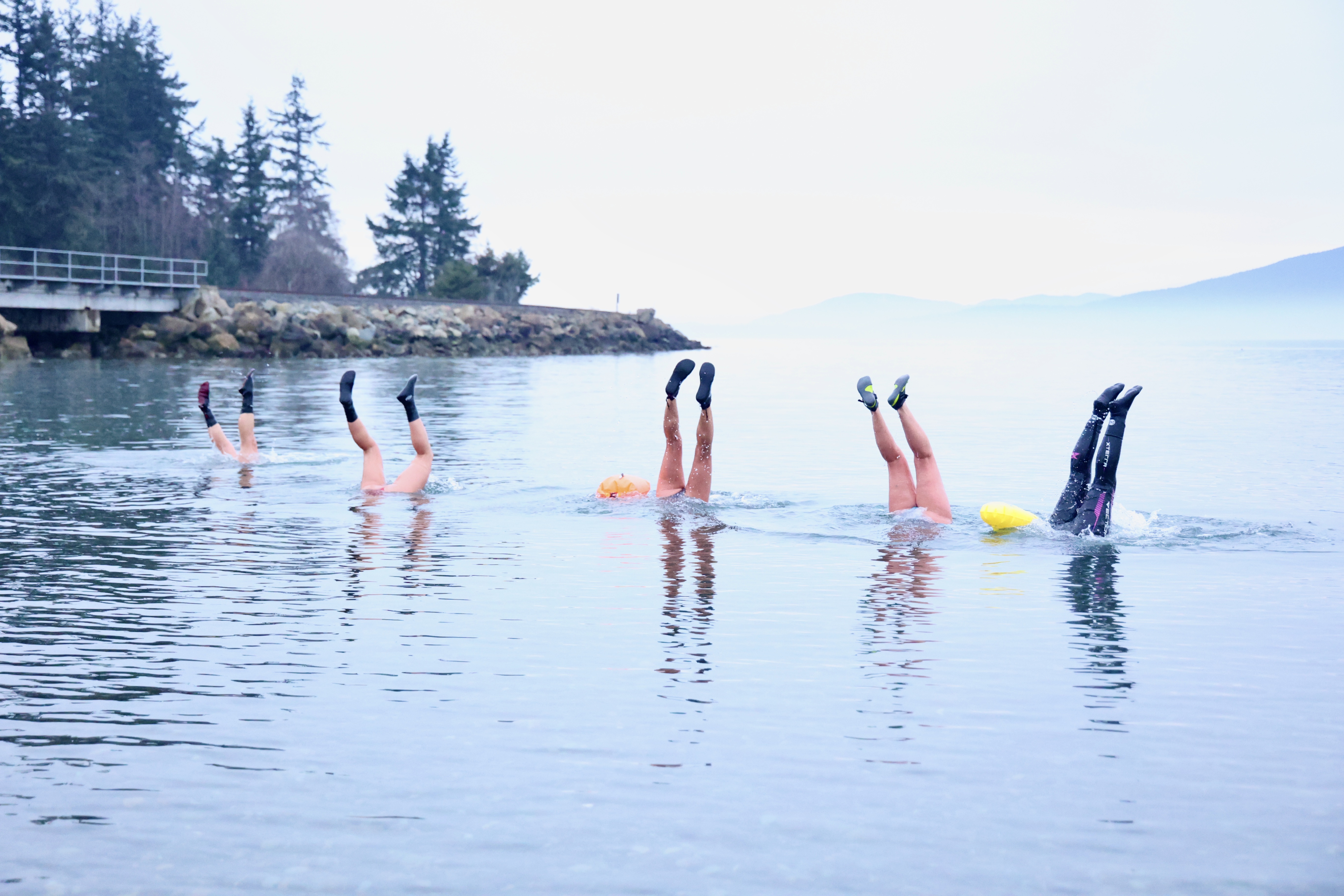 The swimmers did handstands, dunking their heads into the freezing water, before heading back to shore. (Victoria Corkum/Cascadia Daily News)

Tipton and other scientists hypothesize that the body’s physiological responses to the cold are part of what generates the rejuvenating boost in wellbeing that swimmers claim to experience.

“Cold receptors, when they're stimulated, release adrenaline, noradrenaline, all the stress hormones,” Tipton said. “It's part of the fight or flight response. They do alert you, they do awaken you, and prepare you to run away or fight.”

Kim Wiley, 56, and other swimmers at Marine Park agreed that a keen sense of awareness comes from cold-water swimming.

“All of your senses feel super alive after you swim,” said Wiley, who was one of the original Facebook group members. 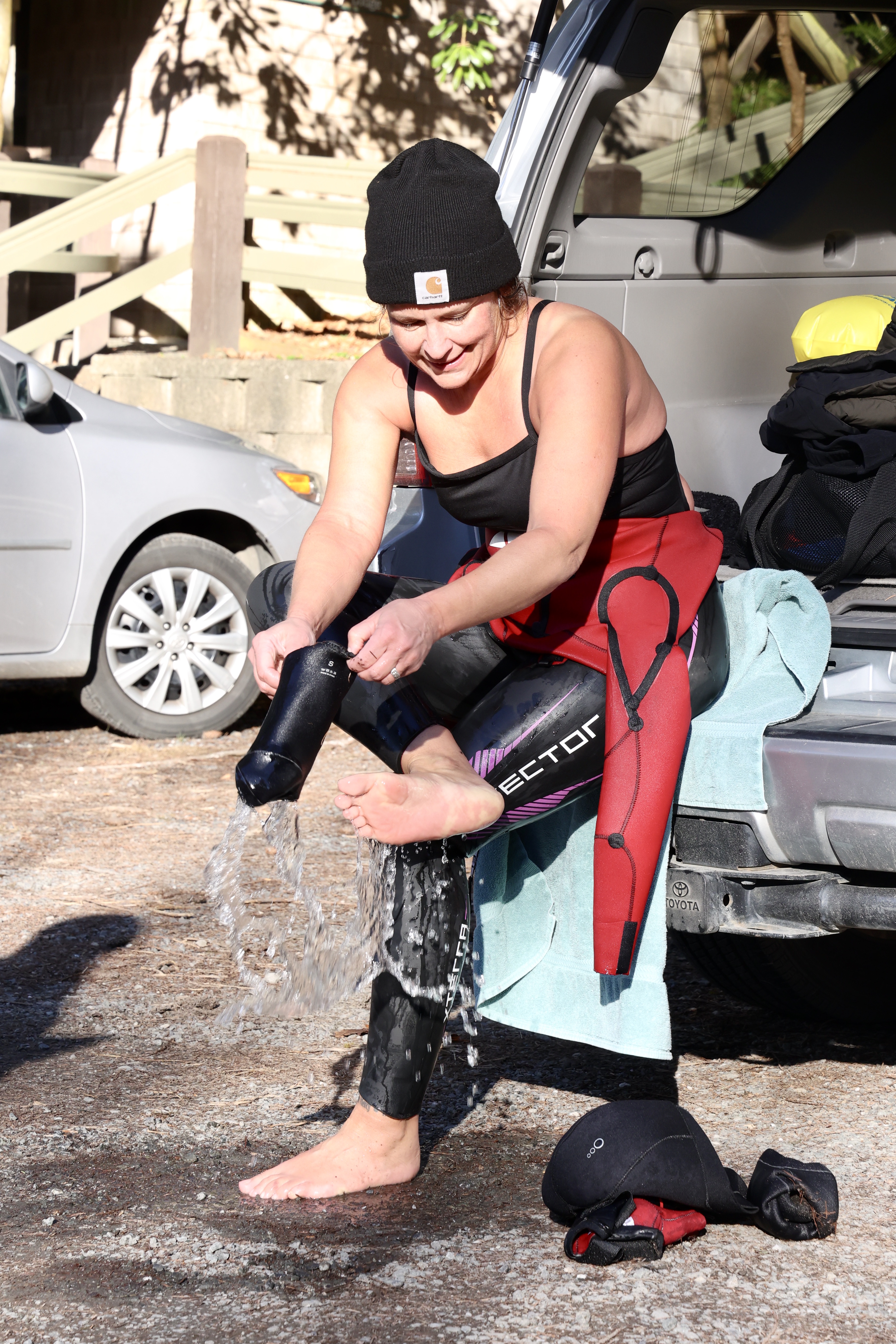 Tipton said short dips in cold water cause mild stress in the body that might also boost the immune system and reduce inflammation, which has been linked to conditions such as Type 2 diabetes, Alzheimer’s disease and depression.

“The immune system, the anti-inflammatory system, all these different systems need to be perturbed in order to remain functional,” Tipton said.

Cold-water swimming also can increase the body’s levels of feel-good chemicals such as dopamine, serotonin and endorphins. Bellingham swimmers speak of a “post-swim high” that lasts all day, which might stem from these altered chemical levels.

While Bates encourages people to take to the sea, she urges safety for those trying open-water swimming for the first time. The cold carries with it dangers that some might overlook.

The most immediate hazard to people swimming in cold water — temperatures below 70 degrees — is not hypothermia, which takes 20 to 30 minutes to set in even in freezing conditions. Instead, it is the body’s instant “cold shock” response.

At first contact, a sudden, deep gasp followed by uncontrollable, rapid breathing and a rise in heart rate can cause swimmers to inhale water or pass out.

But with safe, repeated exposure, the body adapts to the conditions, and those acclimated feel they can better withstand and control the initial distress.

Wetsuits, or "suits," help with the cold, but many Bellingham swimmers go in their “skins,” or swimsuits, because removing wetsuits after a swim is a cold and cumbersome task.

“It’s easier in the water to float them off because they’re stuck to your skin,” said Pete Himmer as he unzipped his wetsuit while standing in the shallows of Lake Samish one recent day.

Another “suit” swimmer, Jennifer Werner, eased the process by pouring warm water over her body as she peeled off her wetsuit after swimming in the 39-degree water of Lake Samish. Werner, 48, stood in a small portable basin that collected the warm water, bringing heat to her chilled feet. 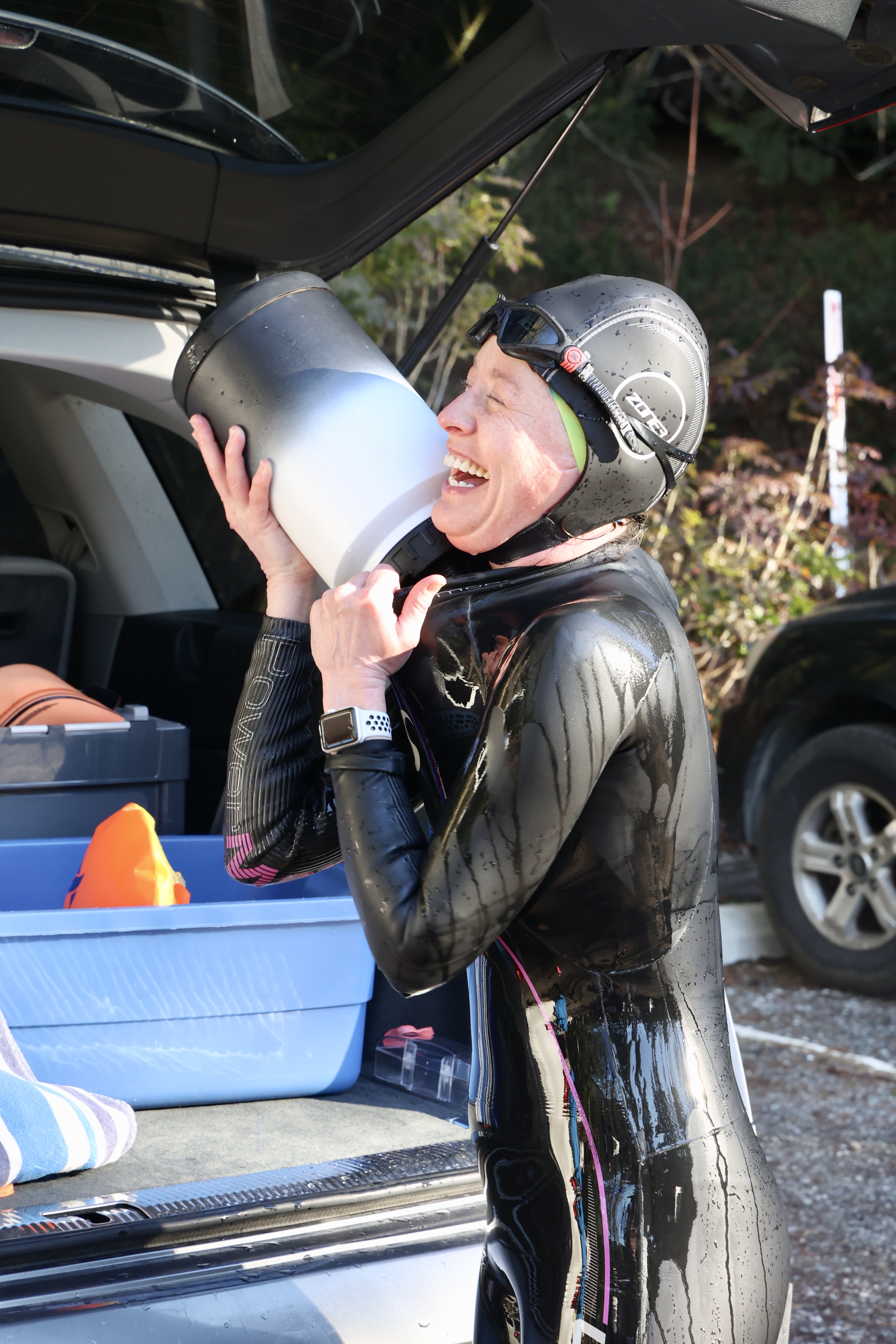 Jennifer Werner pours warm water down her front to warm up and ease the removal of her wetsuit after swimming in Lake Samish. (Victoria Corkum/Cascadia Daily News)

The swims generally last 10 to 15 minutes, but everyone decides what amount of time suits them best.

At Marine Park, six of the seven dauntless swimmers whooped and hollered from the water, the joyful sounds slicing through the low fog hung over the glistening bay.

Back on land, after a few frantic minutes of changing in the parking lot, the group settled into an easy rhythm of conversation, laughter and silliness as they warmed up by skipping and jumping. Lips blue and body shivering, Blaik Kessinger, 33, pulled a tin of raspberry lemon muffins from her car and offered them to the bouncing bunch. 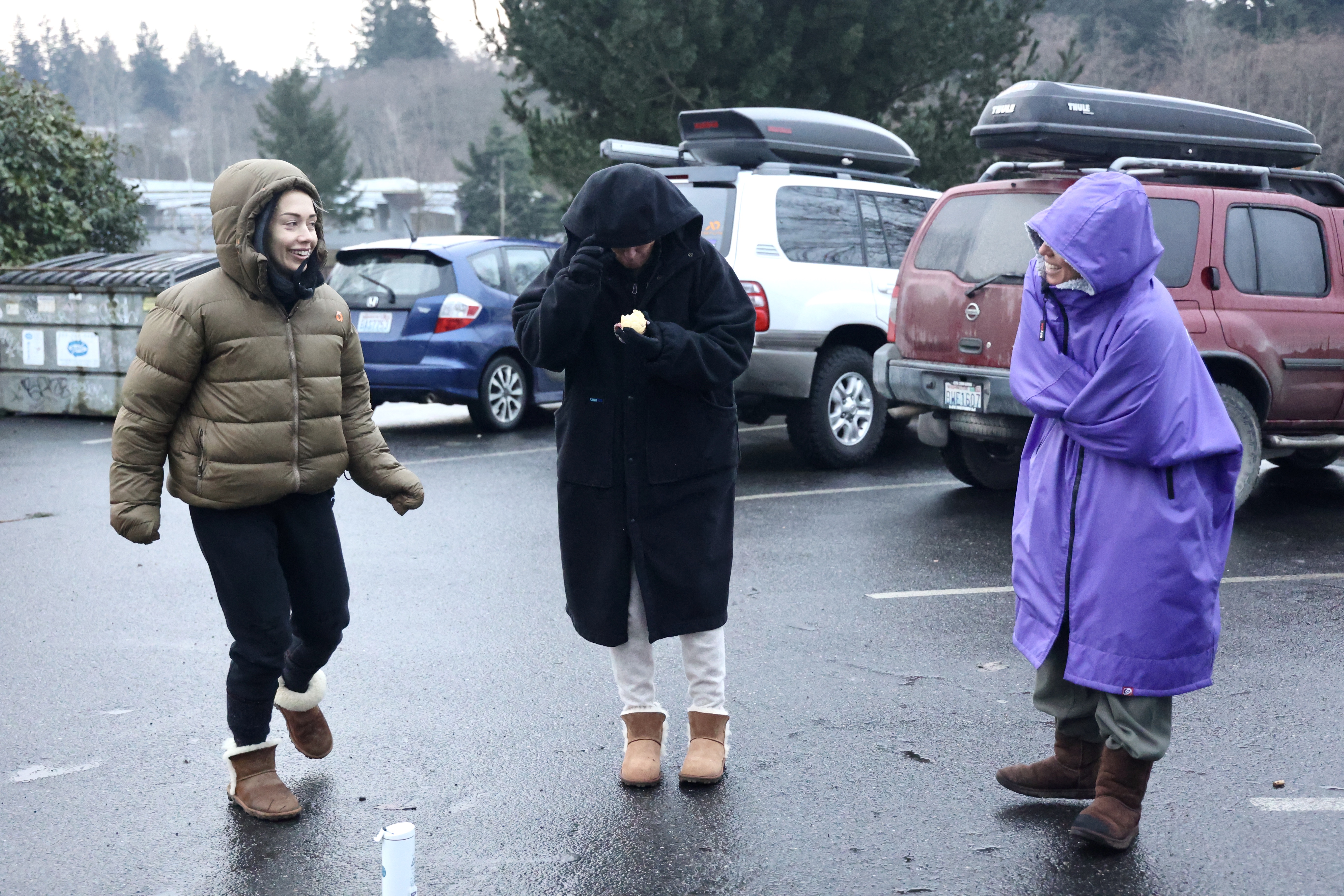 From left, Blaik Kessinger, Kim Brown and Olivia Gleser chat and warm up after their swim. (Victoria Corkum/Cascadia Daily News)

An hour after the swimmers had arrived, their sleepy faces had turned to beaming smiles as they said their goodbyes.

“You're tired or you've had a tough week at work and … it could be pouring down rain, but you go for a swim and there's all these lovely people there and you giggle and you laugh,” Bates said. “The water never disappoints.” 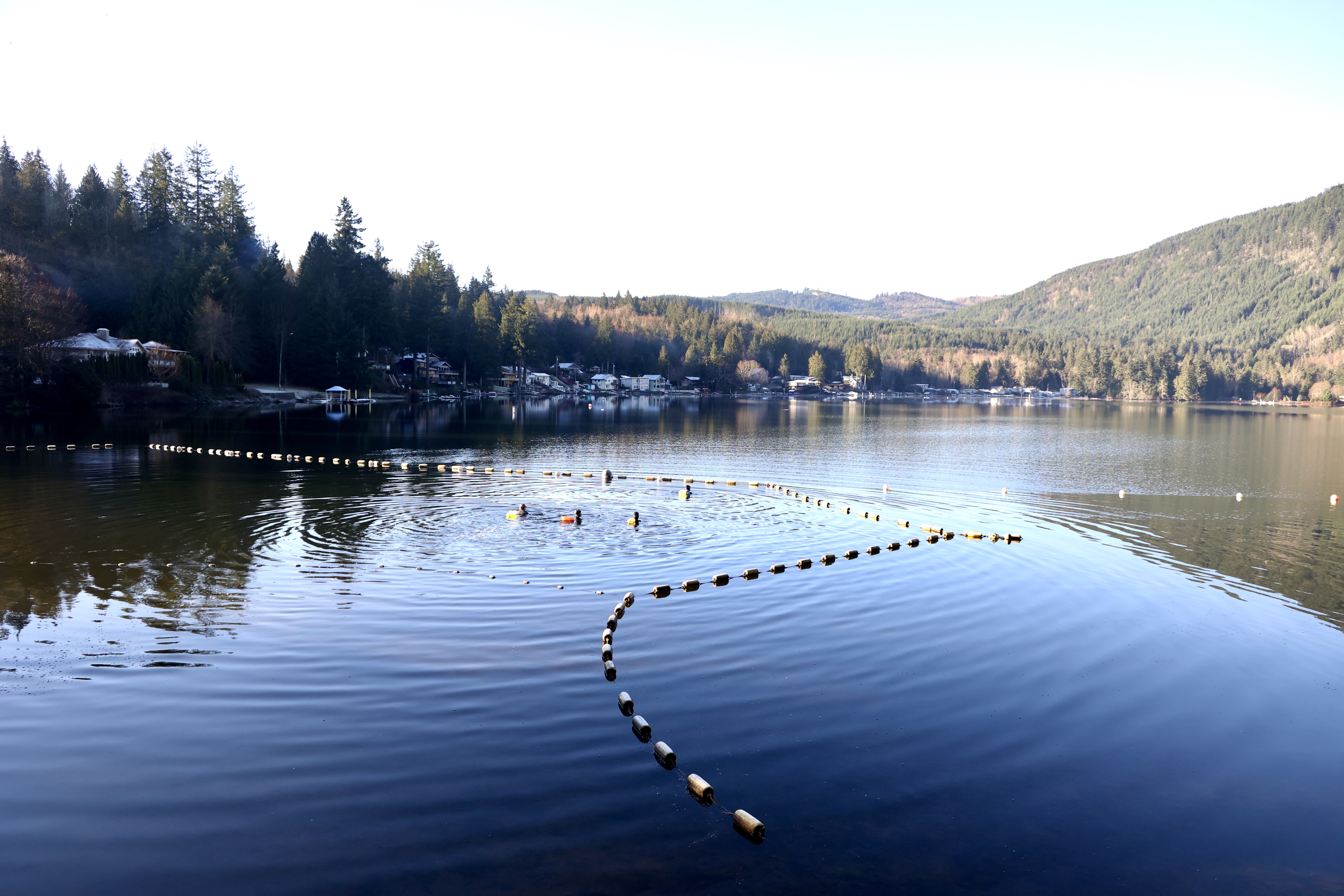 How to be safe while open-water swimming:

– Swim with other people who are familiar with the area. Join the Facebook group.

– Wear gloves and booties if swimming with or without a wetsuit.

– Check currents and tides before swimming.

– Dry off immediately and follow these tips for warming up properly.