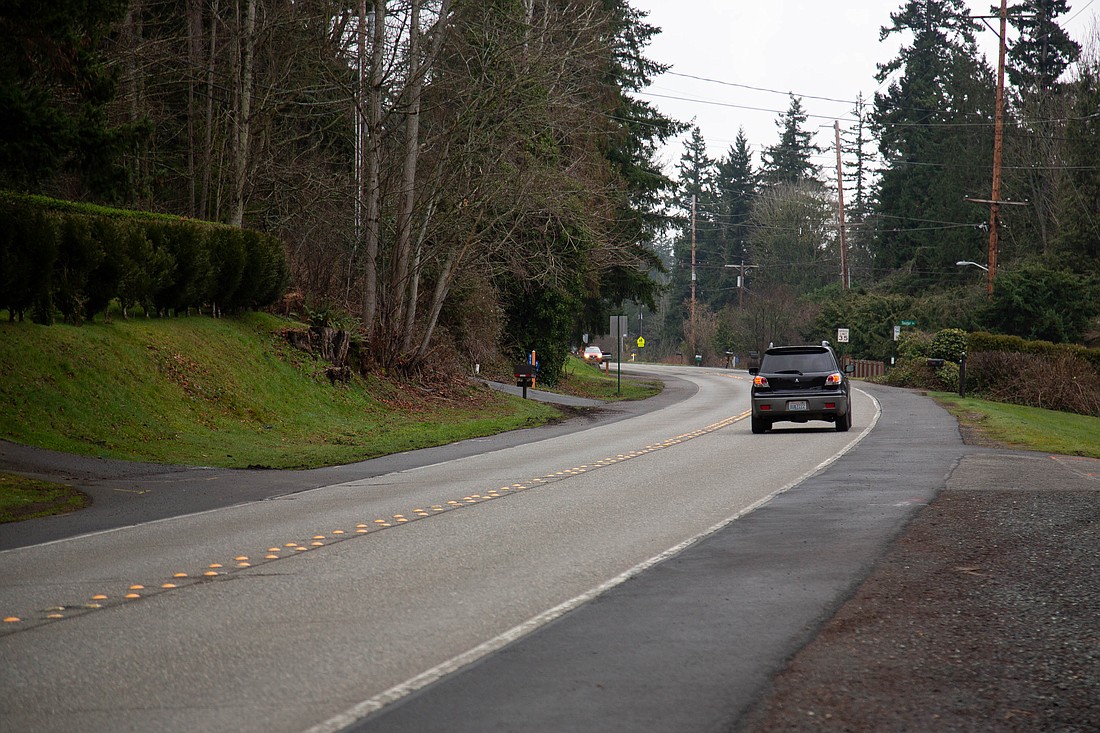 A car heads south on Samish Way, heading toward the Lake Padden area in a neighborhood where an elderly man was struck on a small tractor last week by a silver or white car which fled the scene. Police continue to search for the driver. (Hailey Hoffman/Cascadia Daily News)

Abe Jacobson doesn’t seem the type to struggle for words. But getting just the right ones is a challenge when you’re wound up about something.

Like public safety, in general. Or specifically, the perennial problem of speeding traffic on the southern stretches of Samish Way, where he lives.

“It’s a zoo!” said Jacobsen, 74, a retired southside resident. He lives and opines near 40th Street where it crosses Samish, the former two-lane highway now serving as a heavily traveled arterial between downtown, Lake Padden, Galbraith Mountain — and a bunch of growing residential neighborhoods festooned with electric vehicles.

Later he issued a clarification.

Choose your poison. But heed the point.

Speaking as a longtime resident of said road, your correspondent confesses an unabashed self-interest, and also attests: Jacobson is neither wrong, nor hyperbolic.

This was proven, tragically, last week, when a retired firefighter in his 80s met the fate most of us fear — getting creamed by a motorist gunning their way down a long northbound straight stretch, at a speed probably closer to 55 than the posted (and ignored) limit of 35 mph.

The car, a silver or white sedan, was traveling at a high speed on Feb. 11 when it struck the man, riding in a John Deere lawn tractor to pick up his newspaper at the bottom of a steep driveway intersecting the Samish (Race) Way, police said.

The victim, fortunately, survived and was recovering this week at St. Joe’s while his vehicular assailant remains at large.

As we say while dodging SUVs while picking up the mail: It’s a wonder it doesn’t happen more often.

Without any major cross streets, designated bike paths, traffic lights, crosswalks or other brake-tapping features, speeds build on this road, especially northbound, down the hill. The sketchy fog lines don’t help; cars routinely careen well over them, veering directly at folks picking up mail or kids getting off a school bus. 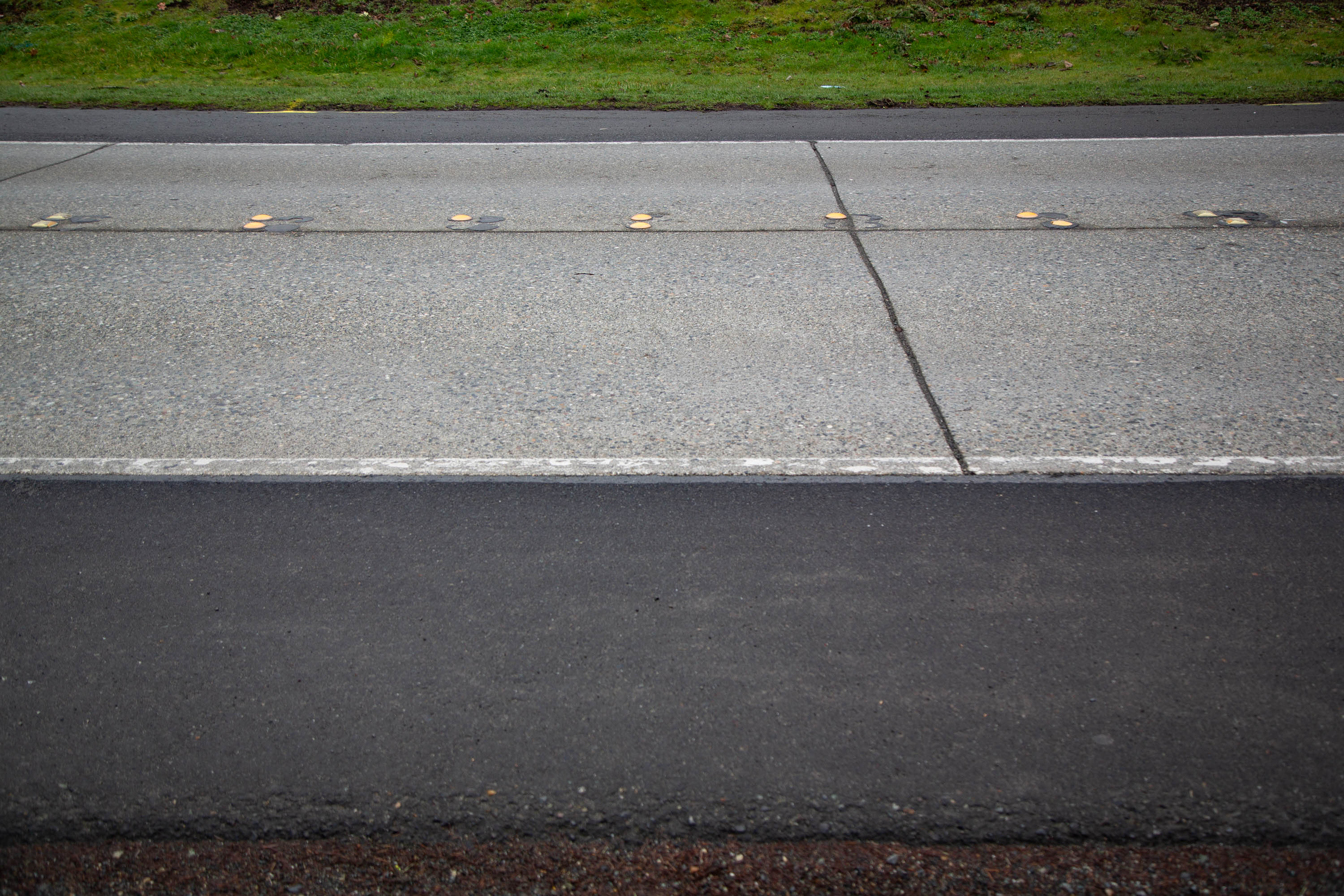 Residents have complained frequently over the years, notes Steve Abell, president of the Samish Neighborhood Association. But previous attempts to get the city to pay heed to traffic problems have fallen on deaf ears.

The association hasn’t tried again in recent years, frankly, “because we believe it would be a waste of time,” he said.

City officials queried about Samish after last week’s near-fatal accident couldn’t offer much in the way of hope.

“Sidewalks and bike lanes on this former section of Highway 99 are 'recommended' in the Pedestrian and Bicycle Master Plans, but score as low priorities and would cost well over $10 million. These are also not competitive for grant funding because it is almost exclusively residential areas, which means that the improvements would need to be funded locally.”

Raising this cash would be “challenging,” said Amy Cloud, a public works spokesperson.

Surely, then, traffic speeds can be contained with human intervention, such as increased traffic patrols, maybe big signs … something.

As of Jan. 4, the city’s Traffic Division has been “reassigned to patrol to augment staffing,” the result of a personnel crisis in the Bellingham Police Department, said Claudia Murphy, the police public information officer, noting that this shortage has been made clear to the City Council.

Speed patrols, she said, are “encouraged” by officers during their unassigned time, which for many months they have essentially not had.

The city might consider moving one of its rolling speed signs onto the road to alert drivers to slow down, she said.

Noted, and appreciated. But let’s be clear: It’s been an issue long before the city’s current police staffing crisis. In the 21 years yours truly has taken life-in-hands daily along this road, he has spotted lurking cops on the shoulders maybe five times.

That’s a lot of open road, a lot of momentum — and a lot of potential peril.

“It's just a catastrophe.” — Abe Jacobson, Samish Way resident, on the speeding traffic mixing with pedestrians near his home.

For disgruntled residents such as Jacobson, who has largely given up cycling because he feels it's unsafe, it’s also a lot of hooey. The city, he said, makes choices all the time about how to spend a lot more money than might be required to meet its obligation for a basic governmental need — public safety.

He drives downtown and sees the vast, empty swath of almost-nothing known as the downtown waterfront project, into which, he notes, the city has sunk millions interlocal funds to help build a development which after 20 years consists of a yoga studio, a mead dispensary, an acid ball, and a bike track.

It’s indicative, he believes, of a misbalance in city financing — big bucks spent on visible monuments to politicians with little regard to the needs of the masses funding the operation, out in the fringes.

“My feeling is that the neighborhoods are basically subsidizing this downtown-philia of City Council and the mayor — an edifice they can point to and say, 'Look at this park, it’s a legacy to what a great mayor I was!' They can’t do that with a sidewalk out in the neighborhoods. It doesn’t have the sex appeal.”

He might be right. It might have been productive to explore this further, but Jacobson was back where he started and finally found the sweet-spot analogy for the cars flying by on the road out front.

“It’s like one of those House of Horror rides.”

Step right up, folks. Tickets neither required, nor issued.