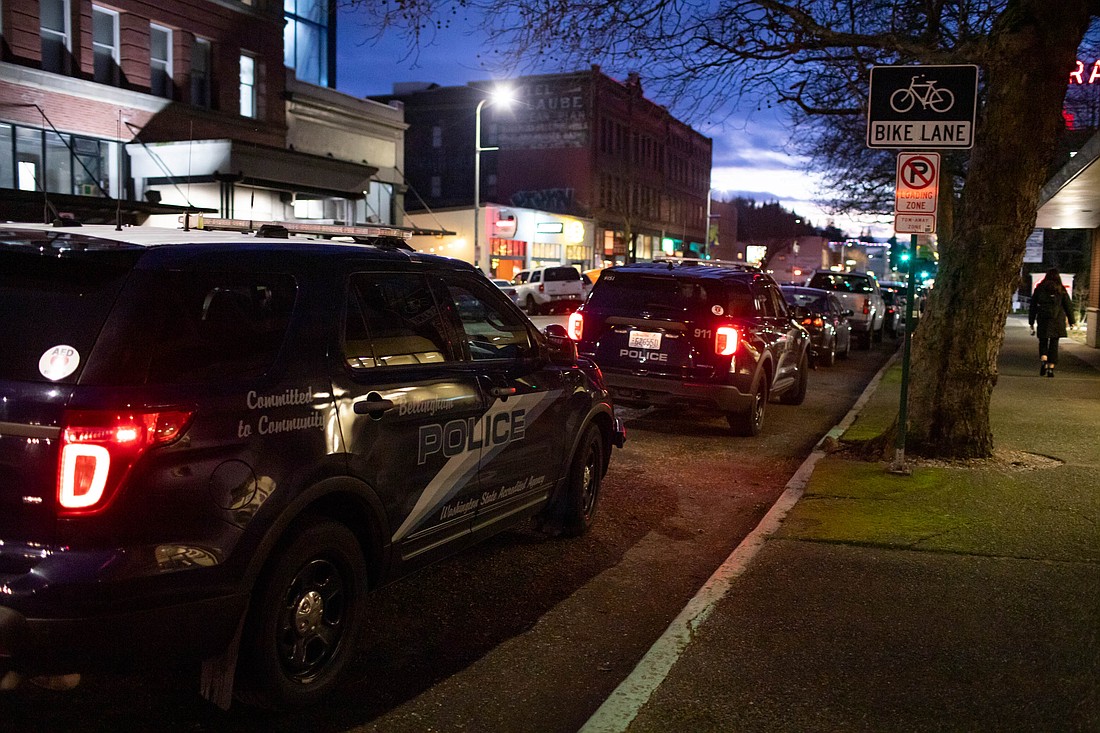 Crime is up sharply in Bellingham, and police say criminals are becoming more brazen. But that’s only half the problem, say two police officers who warned neighborhood groups that a depleted city police department is increasingly unable to solve crimes.

“The safety of this community is compromised and will be getting much worse in years to come,” patrol Sgt. Eric Osterkamp wrote in a “Community Safety” statement he sent to the Samish and Happy Valley neighborhood associations last fall.

In response to its staff shortage, the Bellingham Police Department decided to eliminate all special investigative and patrol units, according to Osterkamp’s statement, which appeared on the social media site NextDoor.

Officer Jon Knutsen, who helped craft Osterkamp’s statement, spoke about Bellingham’s crime problem at a Happy Valley Neighborhood Association meeting in December 2021. He gave some of the latest numbers for Happy Valley from the City of Bellingham’s crime statistics webpage. Vehicle prowls increased 41% in that neighborhood from 2019 to 2021, using the most recent pre-pandemic year as a baseline. Citywide, vehicle prowls were up 68% over those years.

The old advice for preventing car prowls, Knutsen said, was to leave nothing valuable visible in your car. That advice no longer works, he said.

“Now they’re smashing windows just to roll the dice” and see what they might find, Knutsen told the Happy Valley Neighborhood Association. “And why not? There’s very little that’s going to happen to them.”

Thefts, a category that includes shoplifting, increased 29%, but that’s likely to be an underestimate. Several retailers in the city have stopped reporting thefts altogether, Almer said in an email.

“There are very few patrol officers currently working that would not tell you that theft has skyrocketed, even though the statistics do not show it,” he said.

“I have seen calls holding for over an hour that used to be handled within 10 minutes,” Osterkamp said, referring to the lineup of calls at dispatch that await police response. “It’s now routine to see 15–30 calls holding with no officers able to respond. This call load creates a greater burden on officers and an increased frustration and anger by victims and residents.”

Osterkamp declined an interview request, saying he wrote his statement as a private citizen after consulting with interim Police Chief Flo Simon and Deputy Chief Don Almer. He directed questions to the same two officials.

Almer confirmed the staff shortage in an interview. The department has 113 full-time officer positions, not counting command staff. Only 79 officers were actively working shifts as of Jan. 18. That leaves a personnel gap of 34 positions, but Almer emphasized that only 13 of those are true vacancies. The rest are trainees not yet ready for assignment and personnel on temporary leave, Almer said.

Additionally, 10 officers left the force because they didn’t comply with the city’s COVID-19 vaccine mandate, Almer said. Two resigned and eight were fired.

Police numbers in Bellingham should rebound, Almer said, assuming no significant attrition. He said about 20 officers will return from leave or complete training this year.

Even so, the staffing shortage was significant enough to prompt the department to eliminate all but the most essential law enforcement functions: patrol and investigations. The department ended motorcycle and bicycle patrols, and eliminated positions dedicated to Bellingham schools, Whatcom Transportation Authority, neighborhood outreach and behavioral health, among other special divisions.

“This is not the profession people are wanting to get into.” — Deputy Police Chief Don Almer

Without mentioning George Floyd directly, Osterkamp blamed the department’s thin ranks on the Bellingham community's angry reaction to the murder of Floyd, a Black man who died after being restrained under the knee of a Minneapolis police officer for more than nine minutes.

“For the last 18 months, officers were thrown into the fire as racists (and) hateful persons of oppression,” Osterkamp wrote in his statement, which he emailed to the Happy Valley Neighborhood Association on Nov. 7, 2021. “It is predictable that this constant negative influence would impact officers by increasing their stress levels while also creating an apathetic sense towards their profession.”

As a result, Osterkamp added, “We cannot attract qualified people to this profession, and officers are leaving in greater numbers than ever before.”

Again, Almer confirmed the substance of Osterkamp’s message: Bellingham is seeing far fewer police applicants than in past years. In 1995, Almer was among 400 candidates for a handful of positions in Bellingham. Osterkamp said he was among 100 applicants for three openings in 2008. Now, the department gets at most six or seven applicants every month or two, Almer said.

“This is not the profession people are wanting to get into,” Almer acknowledged. “This is definitely a statewide issue for law enforcement.”

Almer has planned a slow and steady approach to hiring that would return the department to full strength and reinstitute the disbanded specialty units somewhere between 2029 and 2033. Filling the ranks will take that long, Almer said, due to what people inside the department call the "silver tsunami": 34 current officers are expected to retire in the next four years.

In the short term, with all those specialty officers focusing on patrol, Almer expects cops will actually be more visible and more responsive to calls. They may even have time to interact more casually with residents in ways that can build community trust, he added.

At other local jurisdictions, staffing is not an issue.

The police chiefs in Ferndale and Lynden said their departments have their full complement of officers — 20 in Ferndale, while Lynden added an 18th position to its department just this year, Chief Steve Taylor said.

Whatcom County Sheriff Bill Elfo said his deputy’s ranks are full, although some positions await new recruits who are completing their academy training. Recruitment suffered in 2020, Elfo said, due to “unfair and some vile criticism” toward law enforcement during the nation’s reckoning with police violence against people of color. More recently, the sheriff said, his office has seen “a resurgence of very qualified applicants.”

“The quality of life in Whatcom County, the reputation for wide community support among the population we primarily serve and the diverse assignments available within the Sheriff’s Office appear to be a significant factors for attracting applicants and retaining deputies,” Elfo said.

Slow response to no response

Wendy Scherrer, a Happy Valley Neighborhood Association board member and a neighborhood resident since 1973, says she still feels safe in her community east of Fairhaven but has heard that certain crimes have become a serious problem.

“I know for sure mail theft has been way up,” Scherrer said, particularly at older apartment buildings where the mailboxes aren’t secure. The Neighborhood Association has discussed how to install building mailboxes that lock.

Police are hearing from residents that they no longer bother reporting smaller crimes because police take too long to respond. Osterkamp said the department is fast approaching a point where it won’t respond at all. “Your bike gets stolen? Report it online,” Osterkamp’s statement says. “No follow-up will be conducted.” He went on: “Same for mail theft, or if your house’s window gets broken, a person is trespassing, someone steals your purse, report it online.”

Almer distanced himself from Osterkamp’s vision of a police department that stops solving petty crimes, although he acknowledged that the anti-crime team that pursued pawn shop leads has been disbanded, and the department no longer has a detective dedicated to property crimes.

“A lot of our officers continue to go the extra mile to do follow-up,” Almer said. Osterkamp’s statement, he added, was “an oversimplification that gave the wrong message.”

“We take a lot of pride in the quality of our police force in Bellingham.” — Bellingham Mayor Seth Fleetwood

Almer said he was sympathetic to the frustration Osterkamp expressed toward people who labeled all cops as racist after George Floyd’s murder. People shouldn’t lump the bad actors in faraway police departments with those who wear the uniform here, Almer said.

“People don’t want to be painted with a broad brush,” he said. “I don’t think our personnel are any different.”

Mayor Seth Fleetwood also defended the department, saying some of the calls to defund the police after George Floyd’s murder were misguided.

Having spent more than 25 years in the department, Almer said he couldn’t remember a single officer who had been fired for racist actions on the job. But new City Council member Kristina Michele Martens, a Black woman who rose to prominence in Bellingham during the 2020 racial justice protests, said the problem with policing isn’t about a few bad apples; it’s systemic.

“They sign up as well-intentioned human beings wanting to make a difference,” Martens said, but police training, in her view, reinforces an “us versus them mentality.”

“For me, it’s hard to digest the information they’re sharing as proof that they are so squeaky clean,” she said. “How fairly can someone self-report without having an independent third party to go through all the documentation?”