Off the vine, into the kitchen 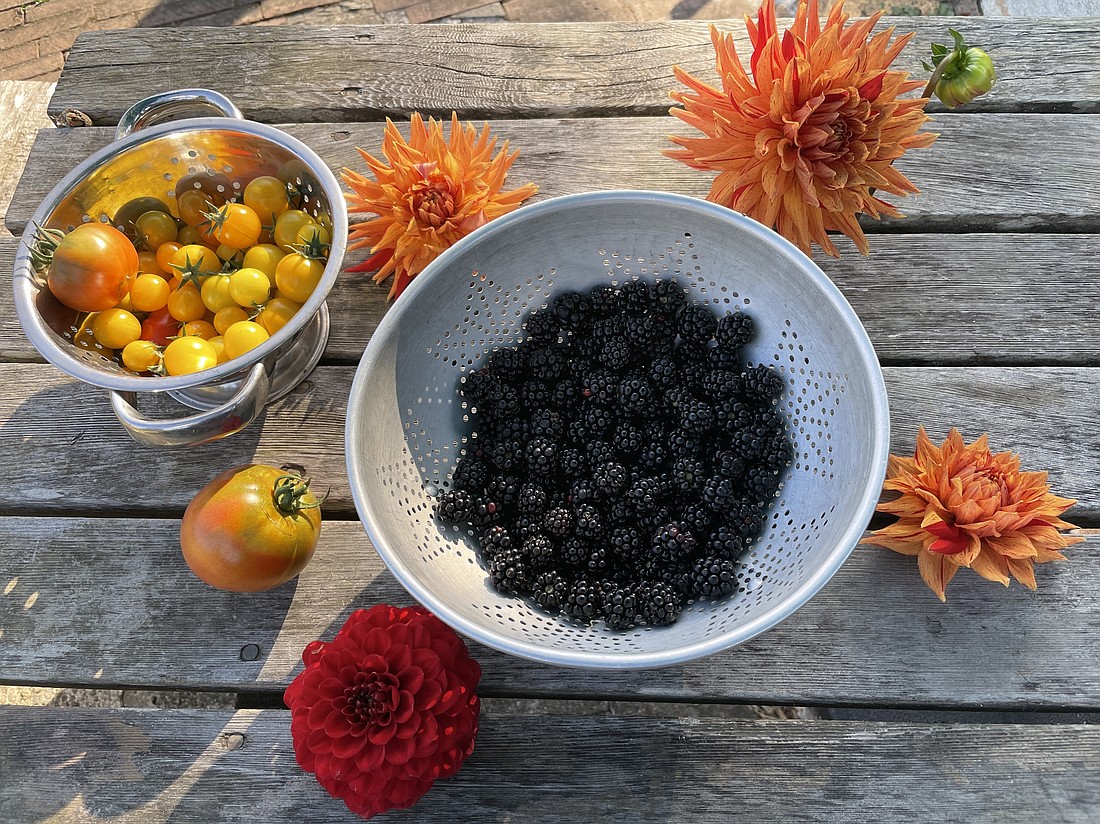 Although many crops in my backyard garden have struggled to produce this summer, one harvest which been consistent is the Himalayan blackberries that have been trained to climb our backyard fence. Used in everything from smoothies to cocktails, pie and compote, the versatile fruit has resulted in an endless summer. (Amy Kepferle/Cascadia Daily News)
By AMY KEPFERLE
Staff Reporter

It’s been a weird summer in the garden.

Tomatoes planted in mid-May have only recently started to ripen, cilantro and basil were quick to produce but even quicker to bolt, and the Italian plum tree that last year delivered more than 100 pounds of fruit to our larder and then to our freezer has a scant amount of offerings as of this writing (and I’m pretty sure the squirrels, those adorable jerks, are nabbing what’s already on the limbs).

However, one harvest which has been consistent this year is the Himalayan blackberries that have been trained to climb our backyard fence. For more than a month, the noxious weed common to the Pacific Northwest has been distributing round after round of perfectly plump, juicy berries that are undeniably tasty whether eaten directly from the vine, placed atop a bowl of granola or muddled and added to a refreshing adult beverage.

Barring heavy rains — which can cause the berries to mold before their time — it appears the crops plentiful to the area will continue to bring on the bounty of the season for the foreseeable future. And despite the amount of claw-like scratches that line my arms because I typically forgo wearing long sleeves when venturing into the blackberry brambles, I’m up for the challenge of using or saving what I can. 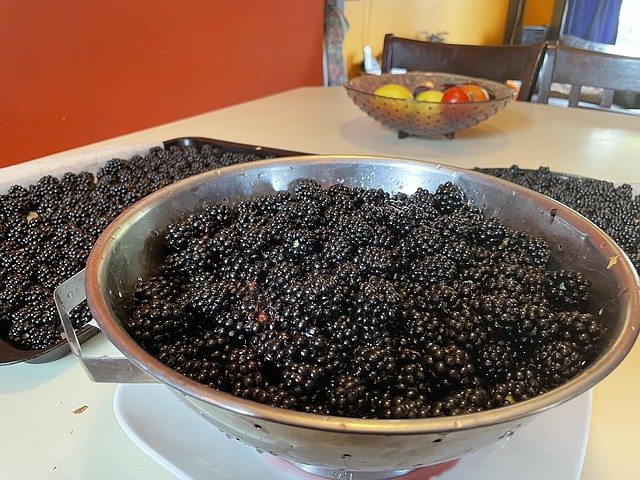 For easy freezing of blackberries, place them in a single layer on a baking pan covered with parchment paper, then stick them in the freezer. After a few hours (or overnight), they’re ready to be easily scooped into a freezer bag. (Amy Kepferle/Cascadia Daily News)

I’ve begun to stockpile the edible orbs for the dark days of winter by freezing them, which is easily done by placing them in a single layer on a baking pan covered with parchment paper, then sticking them in the freezer. After a few hours (or overnight), they’re ready to be easily scooped into a freezer bag, dated and then brought out to wow dinner guests in the form of a blackberry crisp in the months when it seems as if summer will never return.

For the past five or six weeks, the best baker in our household (not me) has made a number of blackberry pies, one of which contained approximately eight cups of berries. Topped with vanilla ice cream, it was one of the best desserts I’ve ever eaten. We’ve also made blackberry compote to put on top of waffles and pancakes, freezer jam (no canning required), what I’ve dubbed “poor man’s blackberry pie” (blackberries, freshly whipped cream and graham crackers crushed together and then refrigerated for a couple of hours), and endless smoothies that are as pretty as they are delicious.

The other morning, I was looking for a blackberry recipe I hadn’t yet tried and didn’t want to make a trip to the grocery store. I came across a number of how-tos for blackberry crumb bars, and happened to have the ingredients on hand to execute my plan.

Described as a mix between a blackberry pie and a crumble, the instructions were easy to follow. I doubled the recipe so I could take a batch to my coworkers, who fell upon the so-called “breakfast bars” with relish.

“It’s like a high-end pop tart,” my boss said in between bites. After telling him my live-in taste-taster had added whipped cream to his bars, his eyes lit up as he suggested taking two bars, warming them up and then adding Tillamook vanilla ice cream on top.

“How many has everybody had?” another officemate asked. “Can I have a second one?” (Note: She later ate an additional three.)

When I pointed out the berry-stuffed treats weren’t as camera-ready as the ones I’d seen while sussing out recipes, another coworker noted their taste superseded their looks.

“It’s substance over style,” she said, popping the last bite in her mouth. 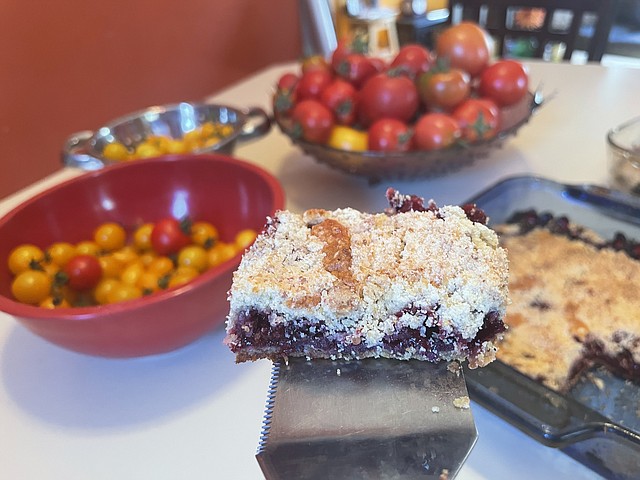 Blackberry crumb bars make for delicious, hand-held treats perfect with a cup of coffee for breakfast, or for a snack later in the day. "It's like a high-end pop tart," one taste-tester said. (Amy Kepferle/Cascadia Daily News)

Make it: Preheat the oven to 375 degrees and spray an 8”x 8” pan with baking spray. Add flour, 1/4 cup sugar, brown sugar, baking powder, salt, butter and egg to a food processor and pulse until a crumbly dough starts coming together. (If you don’t have a food processor, use a pastry cutter, forks or butter knives.)

Add half the dough to your baking pan and press down in an even layer. In a bowl, mix the blackberries, lemon juice, 1/4 cup sugar and cornstarch. Pour this mixture over the crust, then crumble the remaining flour mixture over the top of the blackberries. Bake for 40–45 minutes until the crust is golden brown. Let cool for 10 minutes or more before cutting; serve warm, or place in Tupperware for up to three days.