Marie, The Band: Folk music with a twist 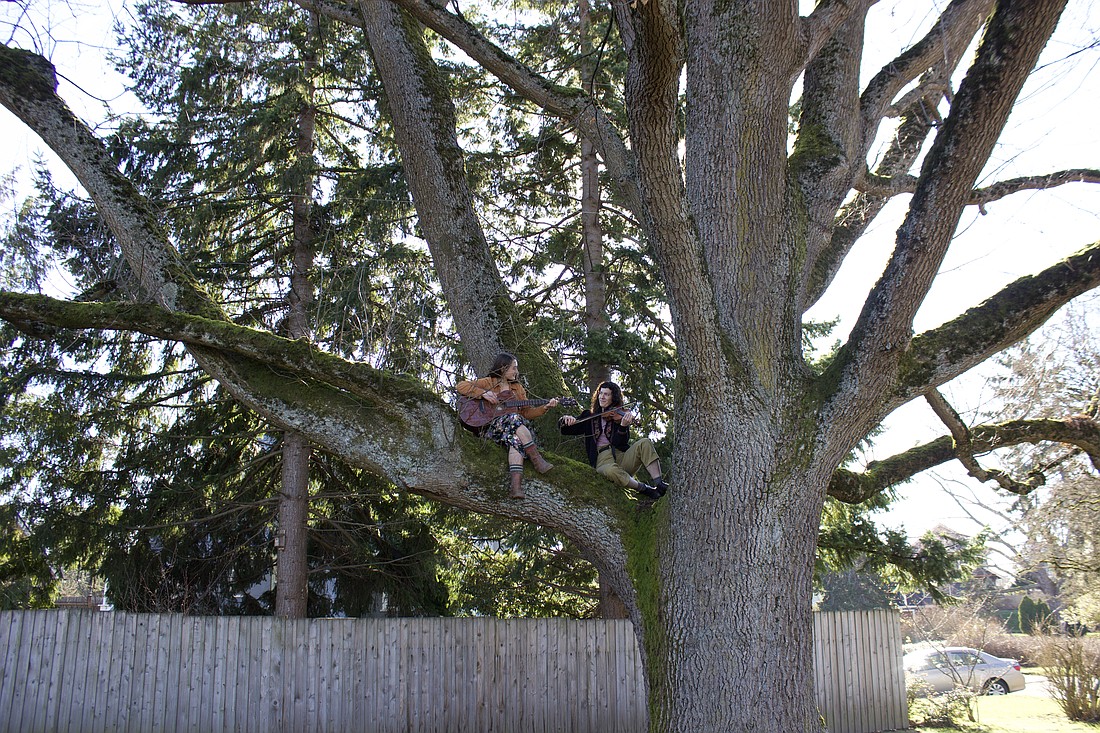 Guitarist Rosie O’Neil and fiddler Colleen Freeman of Marie, The Band bring twists and turns to their original folk songs that make it clear they are doing their own thing. The band will celebrate its first album, “Where I Want To Be," at a Friday, Sept. 16 show at the The Shakedown. (Photo courtesy of Marie, The Band)

The Bellingham-based folk duo Marie, The Band released its first album, “Where I Want To Be,” last month. It’s a seven-song collection that travels through a surprisingly wide range of sounds, considering the limited instrumentation.

The two members of the group are Rosie O’Neil on guitar and Colleen Freeman on fiddle, with both of them trading off lead and harmony vocals. They’ve been playing together on and off since meeting at the Bellingham Folk Festival in 2018, but their first gig came just before the pandemic hit, slowing their progression.

The instrumentation and melodies might make you think of more traditional folk, but when you pay a little more attention to the offbeat lyrics and surprising arrangements, you quickly realize this is not a group only informed by tradition. The tightness of the harmonies is particularly impressive given all the little twists in the vocal melodies. The lyrics mostly revolve around topics like nature, friendship and food, giving the album a strong feeling of comfort and warmth.

Marie, The Band also switches things up by having O’Neil move to fiddle for the double-fiddle instrumentals “Succeed & Repeat” and “Moth In the Flannel.” Again, the melodies and use of drone strings on these might make you think of traditional Appalachian music, but there are twists and turns that make it clear they are doing their own thing. “Bellingham Honey,” on the other hand, leaves out the instruments entirely for some gorgeous a cappella accompanied by hand claps and snaps.

Although the recording is just the two of them, for some live shows they’ve also been working with upright bass and drums. If you want to hear them for yourself, check out “Where I Want To Be” on Bandcamp, or head down to the Shakedown on Friday, Sept. 16.

Update: Live music is back at Stones Throw on a regular basis. The Fairhaven brewery had several nights of music a week before the pandemic. Now it's relaunching with regular Wednesday night shows, in addition to its occasional block parties.

Details weren’t available by deadline but there is typically a lot of live music at Bellingham SeaFeast, which is happening this Saturday at Squalicum Harbor. If you were one of those people who learned a bunch of sea shanties during the pandemic, this just might be your chance to show them off.

Finally, we have a new venue on the horizon. The Foundation Lounge on Cornwall Avenue has big plans to start hosting music, and they have a nice stage already, with an open mic happening every Wednesday. More details on this next week!