For inaugural Ranch-off, newsroom competition gets lost in the sauce 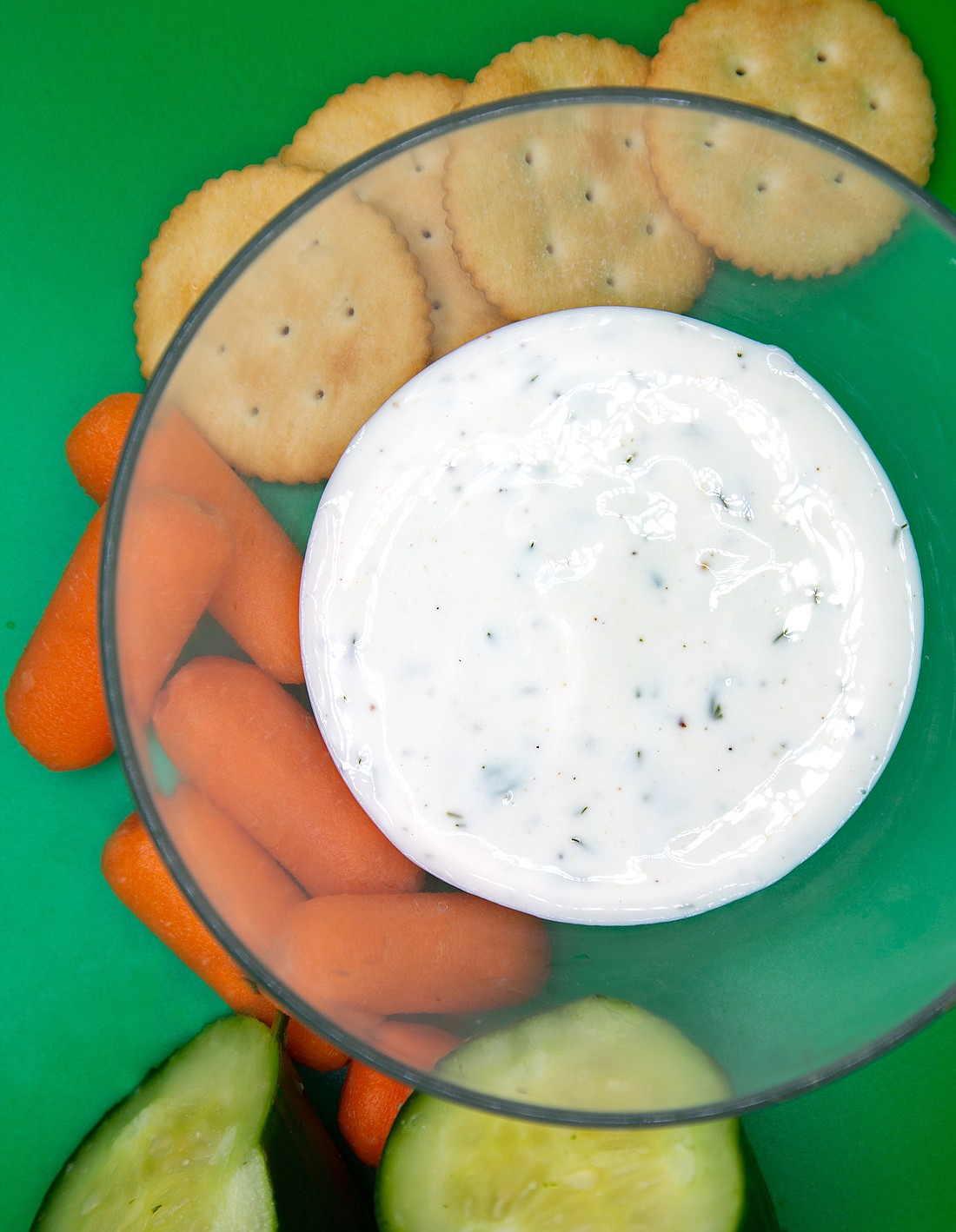 Seven ranch dressings entered the inaugural Cascadia Daily News Ranch-off. Despite differing appearances, textures and flavors, they were all easily identifiable as being a ranch dressing, or at least a rough approximation. The Judge's pick, Jaya and Isaiah's Vegan Ranch, had a substantial acid kick to it — something that plays off the fatty fried and breaded foods often associated with ranch dressing. (Hailey Hoffman/Cascadia Daily News)

Vitriolic. Hateful. Hotly debated. I think we’ve all got a pretty good idea of what those terms could be referring to: ranch dressing.

You might think I’m exaggerating or perhaps just being facetious for the sake of comic effect. To this, I would recommend (or perhaps do not recommend) that you go to Twitter, YouTube or a cooking blog and look up a recipe for ranch dressing, or maybe even a photo simply showing a cup full of this herbaceous buttermilk-based dressing in the background. The comments will oftentimes have you double-checking to make sure you clicked on a photo of food and not a political op-ed. All this to say — you either love it or you don't.

I happen to think ranch is a completely acceptable sauce option for a wide variety of foods, be it veggie dipping for a holiday appetizer or late-night pizza. A common assertion by detractors is that most ranch dressings on the market are preservative-laden, artificial monstrosities packaged in plastic squeeze containers with suspiciously long shelf lives. I agree, but I know it can’t be judged by the lowest common denominator.

All this is to say when I was offered the position of official judge for the inaugural Cascadia Daily News Ranch-off, I knew I had to accept. The concept was simple. Seven ranch dressings entered, but only one would be victorious. Vegetables, chips, crackers, potato wedges and chicken strips were provided as sauce-transportation vessels.

Despite differing appearances, textures and flavors, they were all pretty easily identifiable as being a ranch dressing, or at least a rough approximation. Scribbling notes on our tasting cards, the Cascadia Daily newsroom was a ball of tension. After about 30 minutes of taste testing, our votes were collected and tallied. In a shocking turn of events, my pick did not even get a single other vote. Luckily for me, my vote was the only one being counted. But it really goes to show you can't necessarily trust something as subjective as taste.

It might sound like I'm setting myself up to lose my job. After all, if my sense of taste didn’t line up with even one of the 10 other people in this taste test, how am I going to be able to review a restaurant and give it a fair shake? I try to always take an objective look at things while acknowledging my own biases.

In this case, the ranch I picked (No. 2) had a substantial acid kick to it — something that plays off the fatty fried and breaded foods I associate with ranch dressing. It's easy to say I have a better palate, but the truth is I might have just overthought my decision.

Looking through the notes written by the rest of the participants, No. 2 — my pick — was called “sour” by one and “sweet” by another. A&E Editor Amy Kepferle’s notes started with “No.”

No. 4, the winner of the newsroom's popular vote, was often called “just ranch.” Seemingly, not taking risks seems to improve your general appeal. Besides that, I strongly believe that had most of us encountered these sauces organically in the world, our critiques would have been far less critical. When you’re told to criticize, it’s easy to fall into that role with gusto. Human nature, after all, tells us to look for flaws.

At the end of the day, eat what you like, and like what you eat. It’s my hope at least one of the ranches we tried on that fateful day will become a fixture in your fridge. So without further ado, I present to you the Cascadia Daily News popular vote and the Judge’s Choice recipes for ranch dressing. Give them a try — and try not to start any fights on the internet over it.

Combine in a bowl. Mix.

Mix all ingredients thoroughly in a bowl. Serve chilled.