Youth docents draw a new perspective on history and art 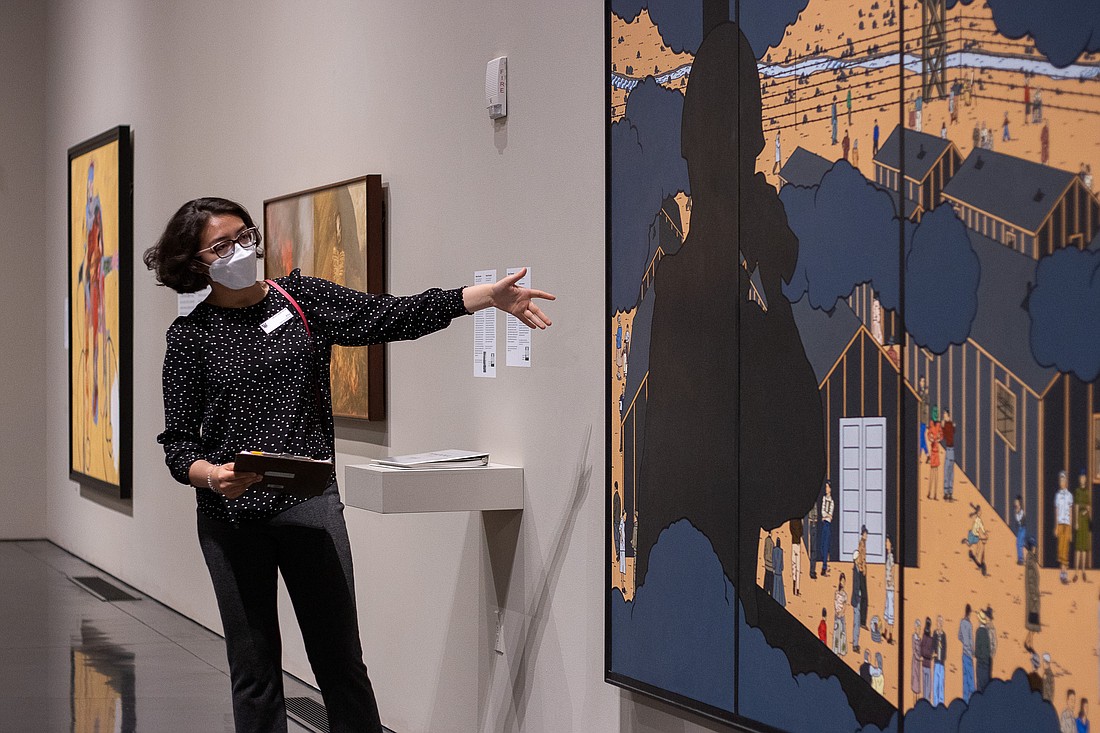 Encased in glass, tucked away near the end of the exhibit, two bonnets glimmer as if made of diamonds. Upon closer inspection, the full picture is revealed — the bonnets are made entirely of hand-placed pearl pins that create a glistening exterior, which is juxtaposed with sharp, teeth-like pins that jut inwards on the would-be wearer.

The two “Seer Bonnets” are part of the Whatcom Museum’s “Many Wests: Artists Shape an American Idea,” an art exhibit breaking down common American narratives about the west. The bonnets on display are just a few in a series created by artist Angela Ellsworth.

Ella Prichard, one of the museum’s youth docents, favors “Seer Bonnets.” She shows it near the end of her tour, allowing more time for participants to soak the piece in.

Prichard is one of 10 youth docents who give guided tours at the museum. The youth docent program was created to introduce new ways of viewing art and drive alternative interpretations, Education Manager Drew Whatley said.

After a lengthy search and interview process, students from high schools across the county were selected and trained between February and March to give guided tours. Initially expecting most applicants to be juniors and graduating seniors, Whatley and Museum Educator Bridget Girnus were surprised to see high schoolers of all ages apply.

Prichard brings attention to the work of Patrick Nagatani and his “Nuclear Enchantment” series. Nagatani’s work is some of what drew Prichard into the exhibit originally. (Noah Harper/Cascadia Daily News)

Though Prichard is not an art student, the message behind the exhibit inspired her to become a docent.

“It's like combining history and diversity and breaking stereotypes — that's really important to me. Even though I do not know a whole lot about art,” Prichard said. “I've met some cool new people and broadened my worldview about art and a lot about pieces of history, especially local history of the west that I previously didn't know.”

While being a docent does require some artistic knowledge, guided tours are a lot more like having a conversation with people about the exhibit, Whatley said, which has helped evolve the guide into being much more interactive.

One idea that developed from the program is using Spotify to create a playlist for the exhibit. Youth docents have begun gathering songs that add to the experience. Eventually, when the playlist is complete, a link will be posted at the exhibit entrance for museum-goers to find and enjoy as they walk through, Whatley said.

“I've met some really cool new people and broadened my worldview about art and history, especially local history or history of the west that I previously didn't know,” Prichard said. 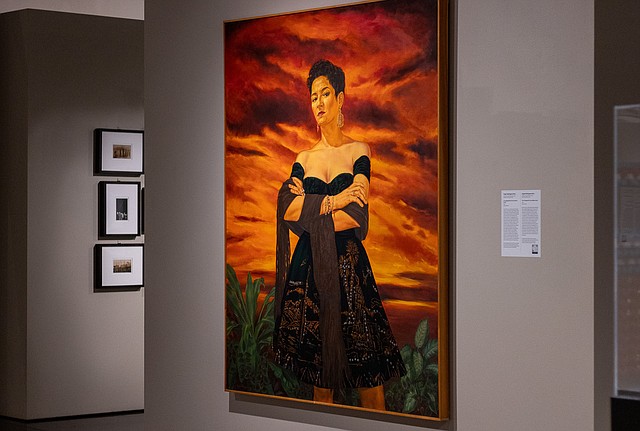 “The Protagonist of an Endless Story” by Angel Rodríguez-Díaz is a centerpiece of “Many Wests: Artists Shape an American Idea” at the Whatcom Museum. The exhibit focuses on breaking down common American narratives about the west. (Noah Harper/Cascadia Daily News)

The “Many Wests: Artists Shape an American Idea” exhibit will be at the Lightcatcher Building at 250 Flora St. all summer until Sunday, Aug. 21. Youth docent tours are on Fridays from 4–5 p.m. and are included with admission or free for members. Info: whatcommuseum.org/explore/docent-tours
Have a news tip? Email newstips@cascadiadaily.com or Call/Text 360-922-3092