Global is Local: Whatcom and the Panel on Climate Change 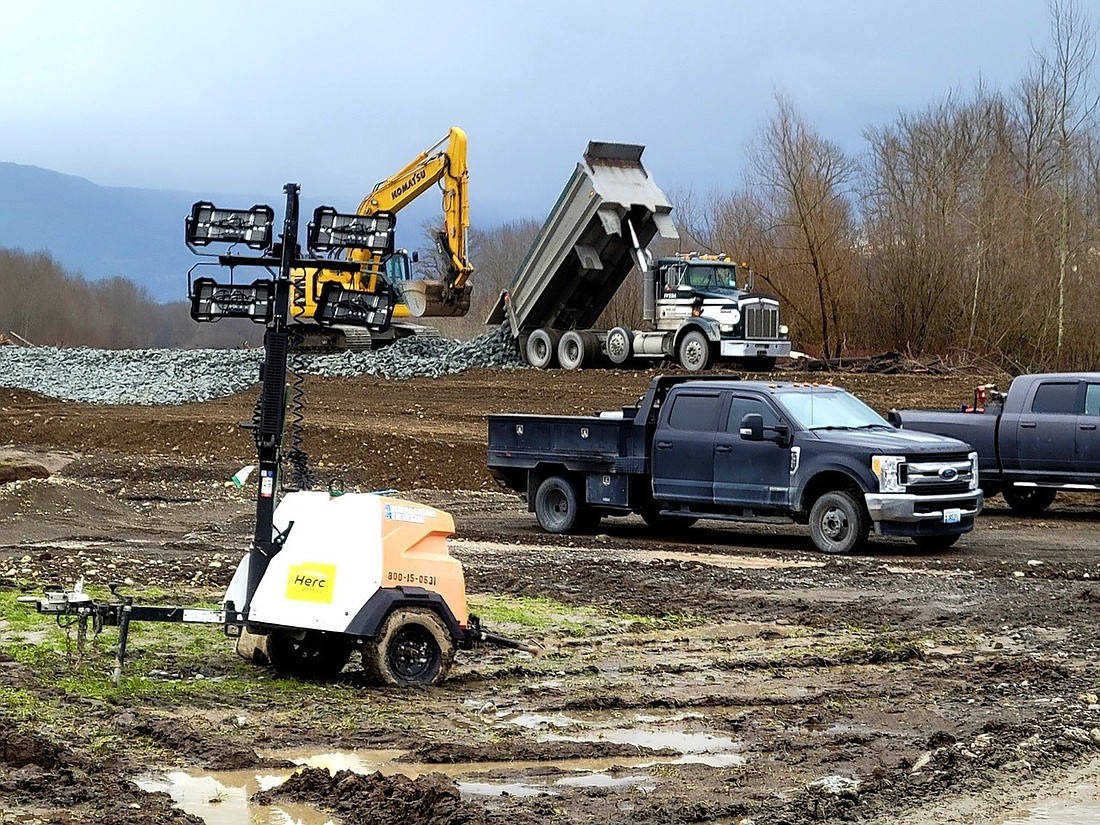 Army Corps of Engineers crews repair a breached dike on the Nooksack River between Everson and Lynden. (Photo courtesy of Hans Wolfisberg)
By Stevan Harrell

Climate change is upon us for sure. Natural systems everywhere and the humans who inhabit them are already feeling the effects of global warming and are “virtually certain” to feel many bigger effects in the near future.

The U.N.’s Intergovernmental Panel on Climate Change (IPCC) has just put any remaining doubts to rest with Part II of its massive Assessment Report 6: Impacts, Adaptation, and Vulnerability.

It was impeccable science, but it might still have been possible to say, “So what? What does this have to do with me?”

Part II of the report, released in February, loudly and clearly answers the “So what?” question: because we’ve already started messing up our planet and our lives, and if we don’t stop, we’re going to mess them up a lot more. So we need to act now, and we need to think and act big.

In its biggest takeaway, the report emphasizes that although it is crucial to slow global warming, in the short run adapting to the warming that’s already here is even more important: “In the near term, climate-associated risks to natural and human systems depend more strongly on changes in their vulnerability and exposure than on differences in climate hazards between emissions scenarios.”

This is where Whatcom County comes in. Our homes, lands, waterways, forests, roads, farms, animals, fish and shellfish are all vulnerable, and even our own health. Almost every specific global vulnerability laid out in the report is a local vulnerability for us.

Near-term global warming will bring more extreme weather events, and those will “place many terrestrial, freshwater, and marine ecosystems at high or very high risk of biodiversity loss,” according to the report. Last November’s floods showed us what atmospheric rivers can do, while the heat dome of June ruined much of our valuable berry crops, and put our dairy cows under extreme heat stress.

Terrestrial, freshwater and marine ecosystems are all changing fast and threatened. Our glaciers are melting, leaving exposed loose sediment that clogs the Nooksack River. Our rivers and creeks are flooding, threatening our cities, farms, and fisheries. Local sea level is rising, threatening shellfish beds, coastal roads, and coastal residential communities.

About half the world’s population currently experiences severe water scarcity for some part of the year. Here our summers are getting drier and hotter, so there is not enough water for fish, farms and residential communities all at the same time.

Our homes, lands, waterways, forests, roads, farms, animals, fish, and shellfish are all vulnerable, and even our own health.

Ocean warming and ocean acidification have adversely affected food production from shellfish aquaculture and fisheries in oceanic regions around the world. Here in Whatcom County, we are experiencing this already: As our seawater becomes more acidic, some oysters and other shellfish are already having trouble forming their alkaline shells.

The report warns that it is very unlikely that we will be able to hold global warming under the 1.5º Celsius (2.4º Fahrenheit) target set by the Paris Climate Conference in 2015 — we have already experienced over 1 degree since the mid-20th century. We just might hit the target if we do act decisively this decade — actions that limit global warming to that level “would substantially reduce projected losses and damages compared to higher warming levels, but it cannot eliminate all of them.”

In other words, if the global community does everything it can to limit warming, we still have to adapt to some of the effects that are already here or will inevitably happen.

The report also offers hope. It warns that effects of near-term change are likely to be most serious where “capacities of local, municipal, and national governments and the private sector are least able to provide infrastructure and basic services.”

We are fortunate that Whatcom County, the City of Bellingham, the Lummi Nation, the Nooksack Tribe, along with our small city governments, ports, water districts, and our local businesses and industries do have the capacity to adapt to all these challenges we are facing. All are ready to undertake climate action, flood and disaster prevention and response, and sustainable land use.

The City of Bellingham already has a full-time climate adviser, and the County plans to hire a climate manager this year. Our climate action plans lay out reasonable, feasible, effective actions to adapt to the fate we have made for ourselves. Now, all we need is the determination to do it.

Stevan Harrell is a retired University of Washington professor of environmental studies and anthropology, and a member of the Whatcom County Climate Impacts Advisory Committee. He lives in Bellingham and tweets at @climatewhatcom.