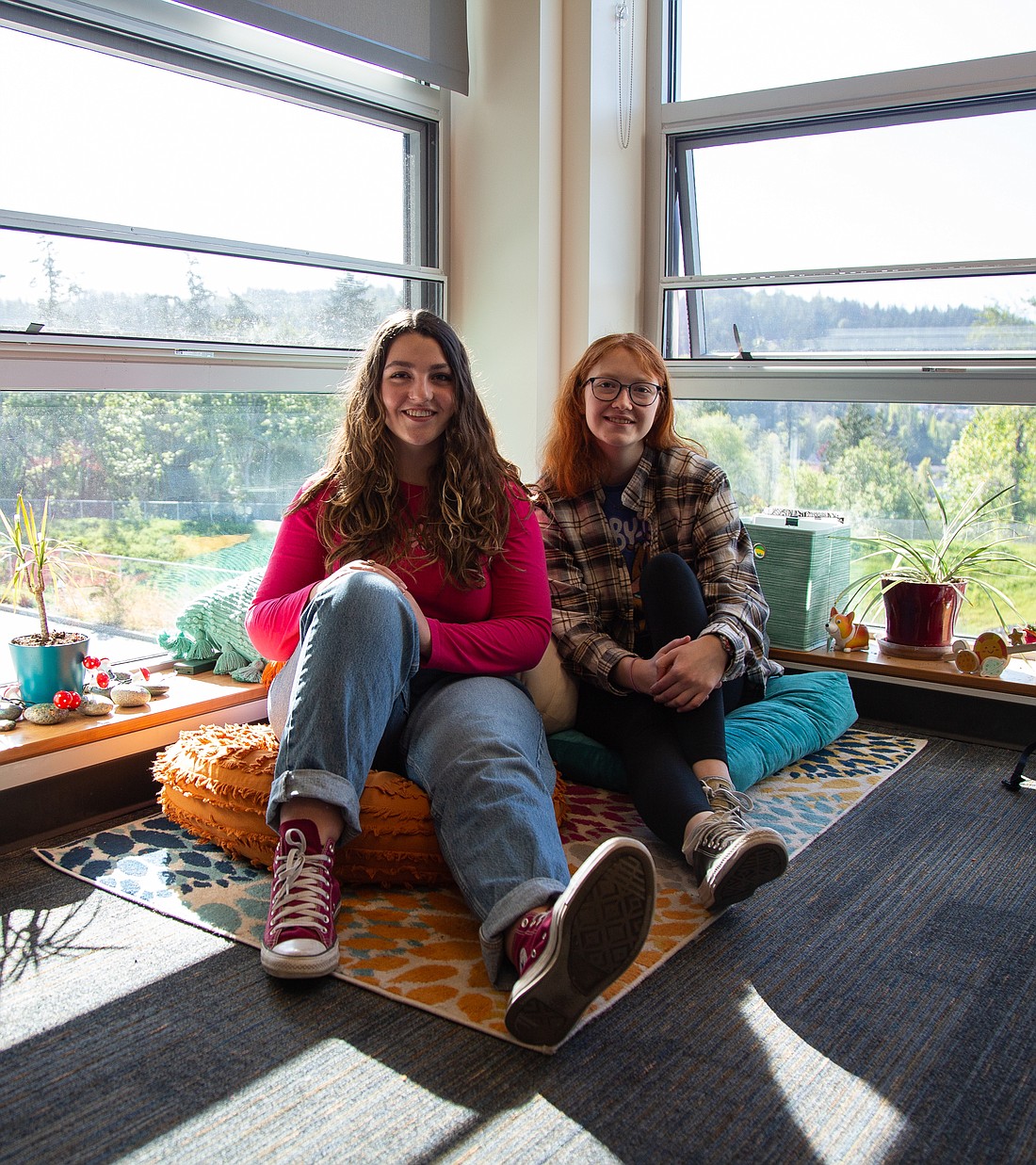 For Whatcom County students, the missed time and moments that came with online education during the height of the pandemic paired with other “unprecedented” world events has had a negative impact on mental health – a surprise to no one.

“I’ve gotten into college. I’m headed off and thinking about graduation and prom, but I’m also thinking about, like, the Supreme Court deciding my rights,” Sehome High School senior Hadley Long said. “I feel like we just have to move on from things really quickly because there’s just always going to be a new thing popping up.”

Beyond world events, local students and staff have faced their own trials this year. Sehome High School, Mount Baker High School and Blaine Middle School all experienced lockdowns due to credible shooting and bomb threats. A student from Lynden High School died by suicide. Floods ravaged Sumas and Everson in the fall.

“I feel like I had to grow up really quickly and not get those years of being a teenager,” Sehome High School junior Rhianna Johnson said. 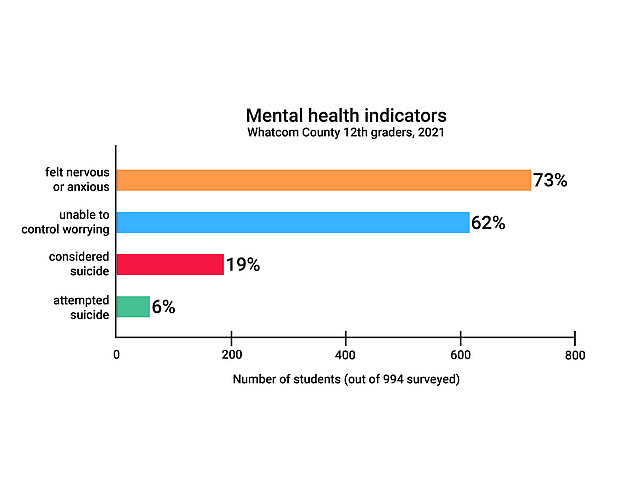 Every two years, thousands of eighth, 10th and 12th grade students are polled across Washington on issues of mental health, substance use, bullying and other behaviors in the Healthy Youth Survey. Included are questions regarding feelings of anxiety and thoughts of suicide. (Jaya Flanary/Cascadia Daily News)

For kids in the county and across the state, the increased load showed itself in responses to the 2021 Washington State Healthy Youth Survey. Of the 994 12th-grade students surveyed in Whatcom County, 73% reported feeling nervous or anxious and 62% said they were unable to control worrying in the past two weeks. About 19% considered attempting suicide and 6% attempted suicide in the past year. Students who reported feelings of sadness and hopelessness increased from 27% in 2010 to 42% in 2021.

“I feel like we just have to move on from things really quickly because there’s just always going to be a new thing popping up.” — Hadley Long, Sehome High School senior

“Whether it’s the war in Ukraine, it’s the pandemic, I think there’s this feeling of unsettledness,” Bellingham Public Schools Mental Health Coordinator Chris Cochran said. “We’ve had so much time in the last two years where, what was true today, we didn’t know if that was going to be true in three weeks.” 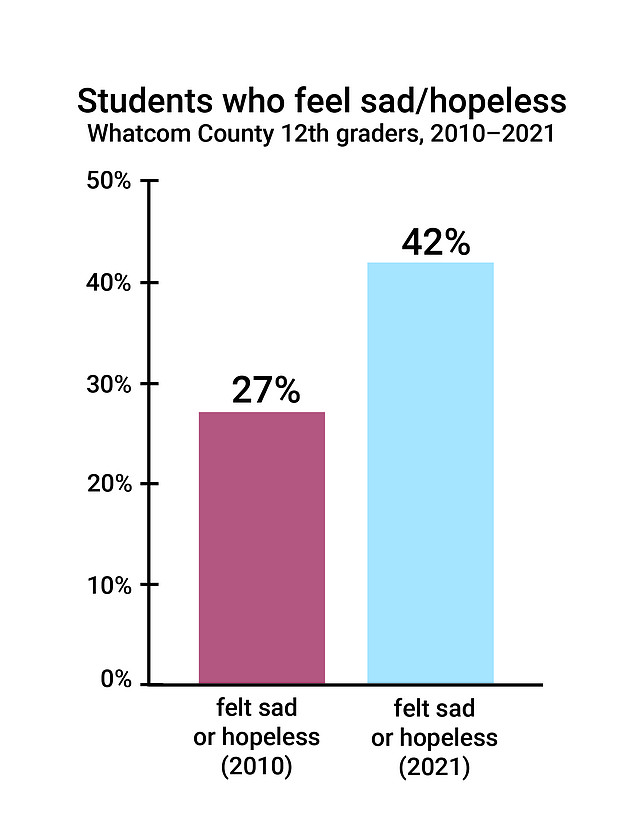 Many schools, teachers and counselors are the ones on the frontlines of trying to provide students with the support they need to process the events that have happened over the last two years as they enter young adulthood. What they’re seeing is more strain, more anxiety and more fear for the future.

“Depression and anxiety were the main challenges that I saw in the beginning,” Bellingham Public Schools Prevention and Intervention Specialist Selene Meza said. “Now that the year is almost over, I continue to see that, but with an increase in suicidality and experimentation of strong substance.”

Cochran said that student mental health in Bellingham schools worsened during the pandemic. He and other specialists throughout the county are fighting an uphill battle to provide students the level of support they need.

Over the last several years, the district has been trying to create more mental health positions. Ten years ago, the district had around two dozen counselors. Now, they sit at 41 for the 23 schools.

In the last two and a half years, the district has hired two other licensed mental health clinicians to work with Cochran and three other prevention intervention specialists to accompany Meza. The new roles work to help students navigate mental health and substance abuse issues and to find them help beyond what the schools provide.

“My job is really about 70 percent coordination, like working with community partners,” Cochran said. “We want to make sure that we’re not, as a district, duplicating things that are already happening in the community.”

Other schools in Whatcom County are also working to beef up the systems for mental health support. The Meridian and Lynden school districts hired their first mental and behavioral health specialists this year.

“As a teacher and as an administrator, there’s a lot of times in both of those roles where you’re confronted with students presenting needs that you’re not equipped to serve,” Meridian School District Director of Special Services Aaron Jacoby said. “The existing system has not been designed to meet student needs.”

“We’re building the plane and flying it at the same time,” Dodd said.

“The existing system has not been designed to meet student needs.” — Aaron Jacoby, Meridian School District director of special services

Dodd, a mental health clinician and former school counselor, said that her one position for the district’s three schools is not enough for the level of need presented among students right now.

Another issue the district faced with the position, Jacoby said, was the lack of applicants. The position opened in the summer of 2021, but they were not able to hire anyone until Dodd applied late last year.

Meridian used American Rescue Plan Act funds to hire Dodd in November 2021. Jacoby said it is a priority to find permanent funding in the school budget to continue supporting the position.

Washington state provides funding each year for school counselors and other staff, but typically schools rely on levies and other funding to support additional school counselors, nurses and mental health providers, beyond what the state deems necessary.

In 2022, the Washington State Legislature passed a bill to increase funding for mental health support; however, school districts say it’s nowhere near sufficient.

“It’s great that they have passed the bill, and it’s put in the budget,” Meridian Superintendent James Everett said. “It’s a good start, but it doesn’t meet the needs that our schools have and our communities have. And, that’s true for more than just Meridian.”

While districts have spent time and money building professional support systems, some have also looked internally to their students to help reduce the stigma around mental health and to build community.

In high schools in Bellingham, staff have created Peer Centered Outreach — a club that started around five years ago to talk about mental health and other issues surrounding it — and Peer Centered Support, a support and wellness group for students.

In Peer Centered Outreach, a club which Long and Johnson are members of, students lead efforts to destigmatize mental health and have raised awareness on issues like identity, sexual assault and body image through videos, events and campaigns.

“I think a lot of people, especially at this age, feel really alone,” Long said. “People just don't have the education to know that the things that they're going through are really normal.”

One of the biggest issues the students see, however, is how the services available are lost on many students, despite efforts from the district to make them known.

Only 59% of students from the Healthy Youth Survey reported that they have an adult that they can go to when feeling sad or hopeless.

“I think we do have a lot of resources in the Bellingham school district, but nobody really knows about them,” Johnson said. "(If) you don't know about them, you can't use them.”