The spirit of solidarity

At the inaugural Whatcom Youth Pride Parade in June 2019, more than 1,000 community members showed up to take part in the event, with many cheering on LGBTQIA+ youth from sidewalks in Downtown Bellingham. The inclusive event returns Saturday, June 4, starting and ending at Bellingham High School. (Photo courtesy Todd Hildebrand)
By AMY KEPFERLE
Staff Reporter

At the inaugural Whatcom Youth Pride Parade in June 2019, organizers had no idea the magnitude of people who would show up to march or line the streets of downtown Bellingham to show their support. Whatcom Youth Pride Coalition (WYPC) board member Holly Tobosa said they would have been happy if “50 or maybe 100” attended.

Remarkably, more than 1,000 people participated in the event — from the youth themselves to allies and community members.

“Hearing the shouts of support as kids marched the parade route was absolutely electric,” Tobosa said. “LGBTQIA+ youth were able to see, firsthand, that not only were they loved and supported, but there was an entire community behind them ready to lift them up. It was also so transformative for queer adults to see a community show up to support youth. Many commented that it would have changed their lives if they had been able to participate in such an event as a young person.”

The spirit of solidarity continued after the parade with a festival at Bellingham High School. The event featured LGBTQIA+ ally and youth-focused organizations, food trucks and a youth-led drag and talent show.

Whatcom Youth Pride, it appeared, had started out on a positive note. But Tobosa said the COVID-19 pandemic “rained on our parade,” which was canceled in 2020 and 2021.

When the event returns from 10:30 a.m. to 2 p.m. Saturday, June 4 it will be with current county and state health guidelines in place. Virtually all of the activities will be outdoors, but mask-wearing will still be encouraged.

Once again, the parade will begin and end at Bellingham High School. Upon its completion, the festival will commence. A queer youth art market will see kids signing up to sell their wares, and there will be crafts and button-making activities. Food trucks and a requisite drag show will round out the festivities. 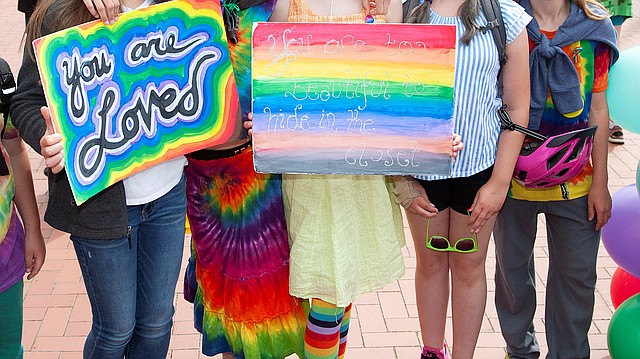 While the event is celebratory in nature, Tobosa said supporting local youth goes beyond cheering them on from the sidelines. Ongoing adult support and advocacy is key, and LGBTQIA+ youth need safe spaces to gather where they can be their true selves. Whatcom Youth Pride Coalition wants to help make that happen.

“LGBTQIA+ youth are under attack from every corner of society, government, education, at home; constantly challenged to reject their authentic self,” she said. “(They) have higher rates of depression and suicide ideation and attempts than their cisgender heterosexual peers. It’s a wholly true statement to say that support for LGBTQIA+ youth is a matter of life and death.”

Additionally, Tobosa said, supporting LGBTQIA+ youth allows everybody to benefit from their rich and varied perspectives and the diversity they bring to the community.

In coming weeks, Whatcom Pride will plan more events for adults and families in advance of a Pop-up Pride event on July 30, but Tobosa said these Whatcom Youth Pride primers will focus on local youth.

When the Whatcom Youth Pride Coalition formed in late 2018/early 2019, the volunteers comprised school staff and educators, parents and community members who met with a shared goal of finding ways to celebrate and support LGBTQIA+ youth in Whatcom County. If you’d like to help them fulfill this mission, show up and stand up at Whatcom Youth Pride.

“Despite our organizational focus on LGBTQIA+ youth, this is a community event,” Tobosa said. “We want folks to line the route to cheer kids on, to come learn about some of the amazing and affirming organizations in our community, to make some art, to buy some art, to support local business by eating at one of the food trucks slated to attend, and to dance along with some of Bellingham’s most talented queens and kings!”