Ski to Sea: It's all about pushing forward

The connective community tissue is worth celebrating 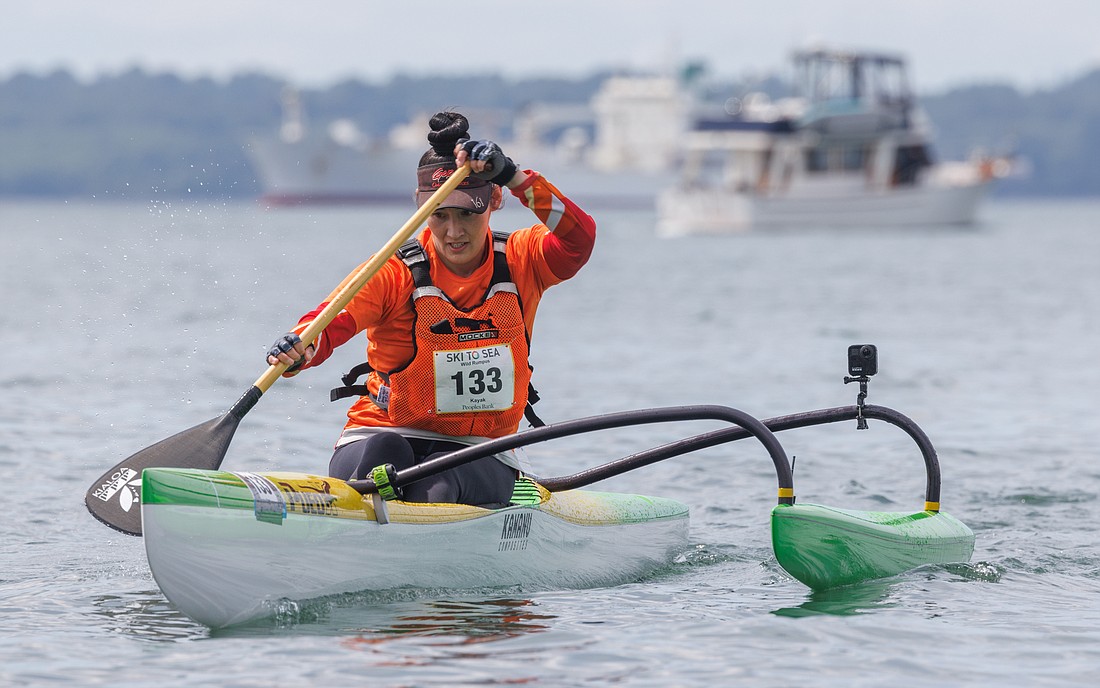 Mignon Fontenelle of team Wild Rumpus powers her outrigger to the shore at the finish line. (Andy Bronson/Cascadia Daily News)

For a lot of folks in our midst, race day began before dawn with the customary Ski to Sea oh-lordy weather report from up on the mountain.

Thirty-seven degrees and sleet. Right on the cusp of June.

It was a holiday weekend Sunday. People in a lot of places might’ve rolled back over and told Alexa to shut the hell up. Around here, there’s a touch of that sentiment, followed by a sort of knowing resolve.

“Thirty-seven and sleet? Bring it on.”

This is not really bravado, which would be gauche; more like belligerent acceptance.

In a Gore-Tex Paclite world we cling with barnacle tenacity to an underlying gestalt as a People of Duct Tape. As a group, we’re a little off, but have some things going on. And many of us who’ve been here for decades have always considered that more feature than bug.

This is exactly why traditional events such as Ski to Sea, even in the current civic and economic climate, still matter. Or should.

The 2022 edition was a notable rebound from an unprecedented two-year absence as our traditional rite of never-arriving spring. It came in the midst of legitimate fretting over the future of large-scale civic events in an age of pandemic. Not to mention a seismic-scale civic transformation that has been at once vexing and contentious, and threatens to become more so.

To be blunt, S2S 2022 played out when the race in some respects seems to be, for all the above reasons, at a new tipping point in size, scale and purpose.

At its core, the race celebrates the sense of community amid natural splendor that brought many of us here and keeps us paying the increasingly hefty freight to stay. And when you’re a grumpy Happy Valley resident trying to block clueless drunks from parking in your dahlia patch, it’s easy to forget how well S2S fosters that collective ethic.

As CDN's entire staff worked the race event and its aftermath on Sunday, here’s what this observer saw, consistent with what's been evident at the event for the past couple of decades: Longtime friends coming together, showing the path to the porta-potties to newbie visitors or recent arrivals.

Many gray-haired warriors — our burgeoning demographic —  paddling kayaks, riding bikes, and kick-stepping on skis, keeping vital and using the race as a benchmark to measure long-term fitness.

A sea of volunteers, more than 500 strong, making a remarkably complex logistical event run more or less like clockwork.

In sum: competitors spanning ages, ethnicities, genders, orientations and other too-common dividers literally locking arms to solve a common problem — moving a computer chip from Mount Baker to Fairhaven as quickly as possible.

It's a race, but who wins ultimately matters to few. It’s the coming together that ultimately wins the day every S2S Sunday.

For that reason alone, it’s OK, and probably even wise, to wince at the nuisance of the event and still accept its value and encourage its longevity. These sorts of community traditions don’t live on without nurturing and support.

Granted, the shift in ownership and organization of S2S some years ago was a challenge to this admittedly idealistic vision. It remains so; the economics of the event must pencil out, and the two-year hiatus threw S2S’s business model a curveball we can only hope has been successfully ducked.

Time will tell, but some cooperative civic maintenance clearly is required. Locals should add to the long to-do list for civic reps, both elected and not, keeping the tradition alive.

That should not suggest stodgy adherence to status quo.

S2S is as imperfect as those of us who indulge in it. It’s worth asking on a rolling basis whether the race is too big for its infrastructure britches, whether the community still supports it and why or why not.

One of the charms of the race is that it already attracts folks in bodies ranging from ripped to paunched. But it’s worth reaching out even farther and more often to not only maintain that everyperson’s character, but make the race more accessible to a broad range of competitors and spectators.

Daunting tasks, all. But … hold our (overpriced, overhopped) beer, right? We've taken on a lot more vexing problems and even solved a few.

S2S doesn’t fix homelessness, housing prices, addiction or any of the other maladies deservedly at the front line for attention. But it does keep folks on the same page, the same text strings and (for you oldsters) phone trees. Personal bonds made by moving that chip through gates tend to endure and transfer to real life. In that sense, S2S is an important source of the sort of civic fiber that keeps a community bound when it strains under emergencies or ongoing challenges.

The race and festival is a one-off, single-day event, yes, and we know plenty of folks who leave town just to avoid the trappings. But let's remember that it’s also one of those surface-level-silly cultural keystones that offer a glimpse into how we see ourselves.

Which in this case is muddy, chilled, tired, resolutely paddling into the wind and pushing on to ring that finish bell which, in these parts, is the very sound of “Oh yeah, world: Is that the best you’ve got?”