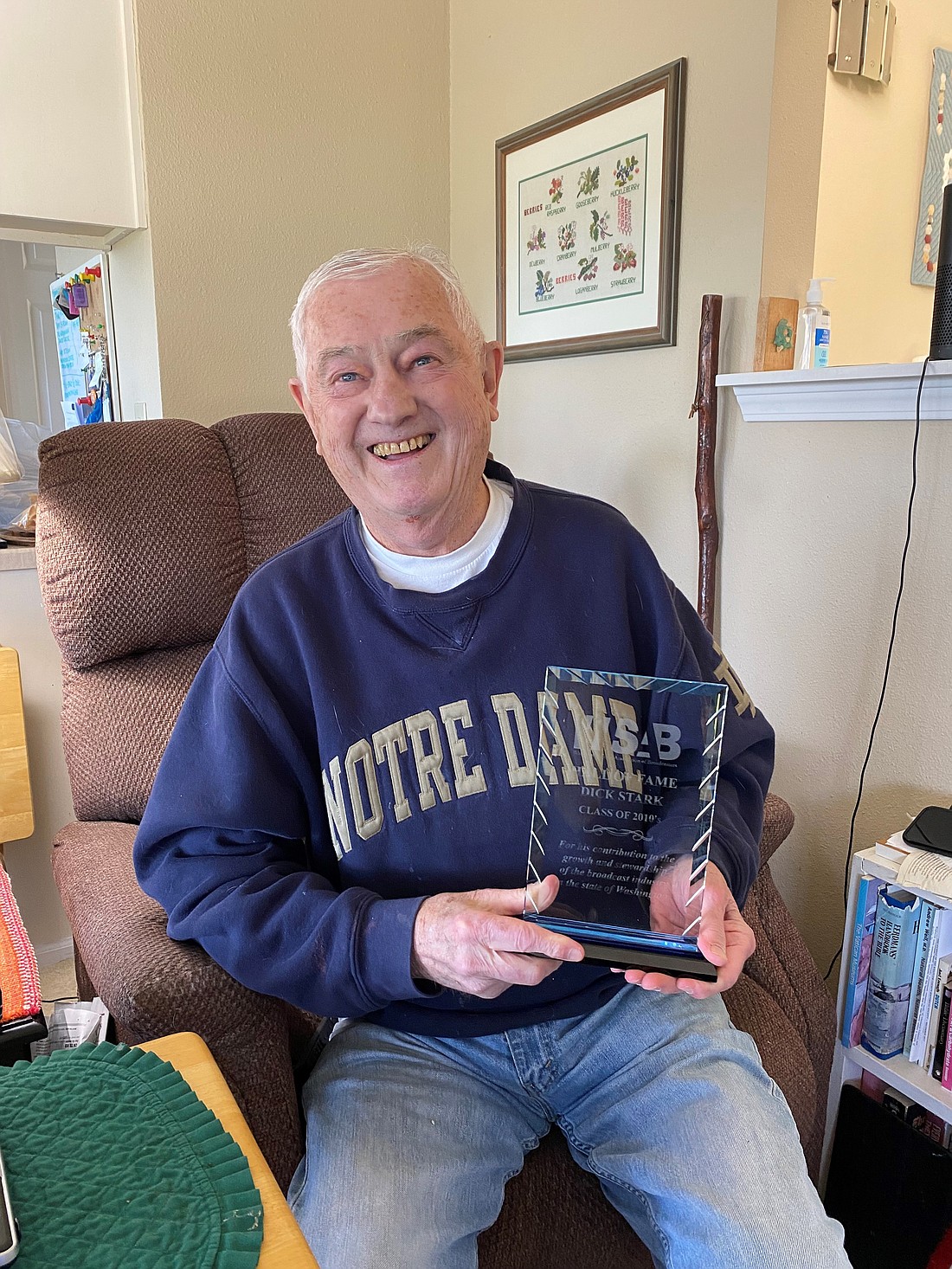 Dick Stark received his Washington State Association of Broadcasters Hall of Fame Award at his home in Bellingham on May 10. The longtime radio broadcaster and Whatcom County youth advocate passed away Tuesday, July 19 and will be celebrated Thursday, Aug. 4 at Cordata Presbyterian Church. (Photo courtesy of Keith Shipman)
By AMY KEPFERLE
Staff Reporter

Until a few years ago, longtime local radio announcer and youth sports advocate Dick Stark was still playing basketball on a regular basis. Although he was already in his 80s, friend and former coworker Don Kurtis recalls him being “fit and spry” and still interested and active in the world around him.

Even before being diagnosed with brain and lung cancer this spring, it was clear how much of a mark Stark had made in his community. The Bellingham native — often referred to as the voice of Whatcom County athletics — died Tuesday, July 19, at the age of 88, but his legacy will not soon be forgotten.

It's difficult to encapsulate the highlights of a nearly nine-decade life, but after graduating from Bellingham High School in 1952, Stark went on to excel in a number of fields. His touchstones were radio, sports, family and helping area youth in ways both large and small.

Throughout the years, Stark attended the University of Washington and Western Washington University; served in the United States Army; got married to his wife Ardith in 1962 and had a family; co-founded the Bellingham Boys & Girls Clubs; founded Whatcom County's Mavericks youth basketball program; owned Stark's TV and Video; and served as a disc jockey, account executive and manager at 1170 KPUG-AM during the station’s Top-40 era and beyond, after it amended its format to all-sports. 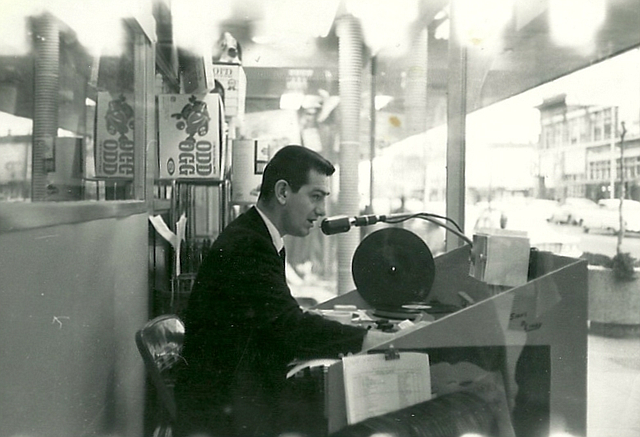 Dick Stark performing a remote broadcast in his early days at KPUG-AM. His tenure at the local radio station lasted 56 years. (Photo courtesy of Keith Shipman)

During his 56-year tenure at KPUG, Stark became known for his football and basketball radio play-by-play for Whatcom County high schools, and was also the voice of Western athletics for a number of years.

Keith Shipman, president & CEO of the Washington State Association of Broadcasters (WSAB), worked with Stark from 1977–81 at KPUG, but first became acquainted with him when Shipman was a basketball player for Sehome High School.

“He was a sensational mentor when I was a teenager and as I continued my journey through sports broadcasting and later radio station ownership,” Shipman said. “I’ve always said that you knew you had arrived as an athlete in Whatcom County when Dick said your name on one of his radio broadcasts.”

Shipman last saw Stark on May 10, when he and Kurtis visited him at his home to present him with a WSAB Hall of Fame Award. Stark was among the 175 broadcasters from across the state who received the inaugural award, but he got his in advance.

“Even though he was in a great deal of pain, he still had the smile that lit up a room,” Shipman said. “He was always positive — even with his broadcasts, he was rarely critical. He had a wholesome approach to life. I'm grateful to have known him and grateful to have been in his orbit.

“He was really a hall-of-famer,” Shipman added. “This guy batted a thousand his whole life — as a friend, father, husband and member of his community.”

Kurtis, the former general manager of Cascade Radio Group and Stark's broadcast partner on high school sports for approximately 25 years, first met Stark in 1990 when Kurtis relocated to Bellingham from Seattle. Although they worked for competing radio groups at the time — Stark for KPUG, Kurtis for KGMI — they became broadcasting partners, mostly for local high school basketball games, when Saga Communications brought the stations under one roof.

“We were talking after he was first diagnosed, trying to figure out how many games we actually did together,” Kurtis said. “I worked with him on his last broadcast in 2015. It was the Lynden boys basketball state championship. They won the game. Dick was excited they were able to get that win.”

When Stark was presented with his award in May, Kurtis said his friend's memory was still as clear as a bell, and that he was bringing up events and interactions even Kurtis hadn't remembered.

“He was positive, upbeat,” Kurtis said. “He got dealt an awful card at the end with his health, but there was no pity party. He was kind and humble and probably one of the nicest guys you're ever going to meet. He always had a smile on his face. He'd seek you out with a handshake and a pat on the back and was always interested in catching up.”

With Stark's legacy stretching back so many decades, Shipman is leading a charge to rename Bellingham's Civic Field “Dick Stark Stadium.” And although Bellingham City Council has implemented a policy prohibiting a name change of parks and other public places until 10 years following a person's passing, Shipman and other members of the community — including Pete Kremen, a former state legislator and Whatcom County executive who was news director at KPUG for several years — are hoping to speed up the process.

“Exceptions can always be made to the rule,” Shipman said. “I'm hopeful they do the right thing, particularly at a time when there are so many negative things going on in the world.”

This week, Stark's children — Yvonne Leslie, Ward Stark, Renee Stark and Evan Stark — announced they will be hosting a service for their father at 11:30 a.m. Thursday, Aug. 4 at Cordata Presbyterian Church, 400 Meadowbrook Court. Mask-wearing is encouraged.

“It's a celebration of his life, not a memorial,” Renee Stark said. “We're doing OK.”