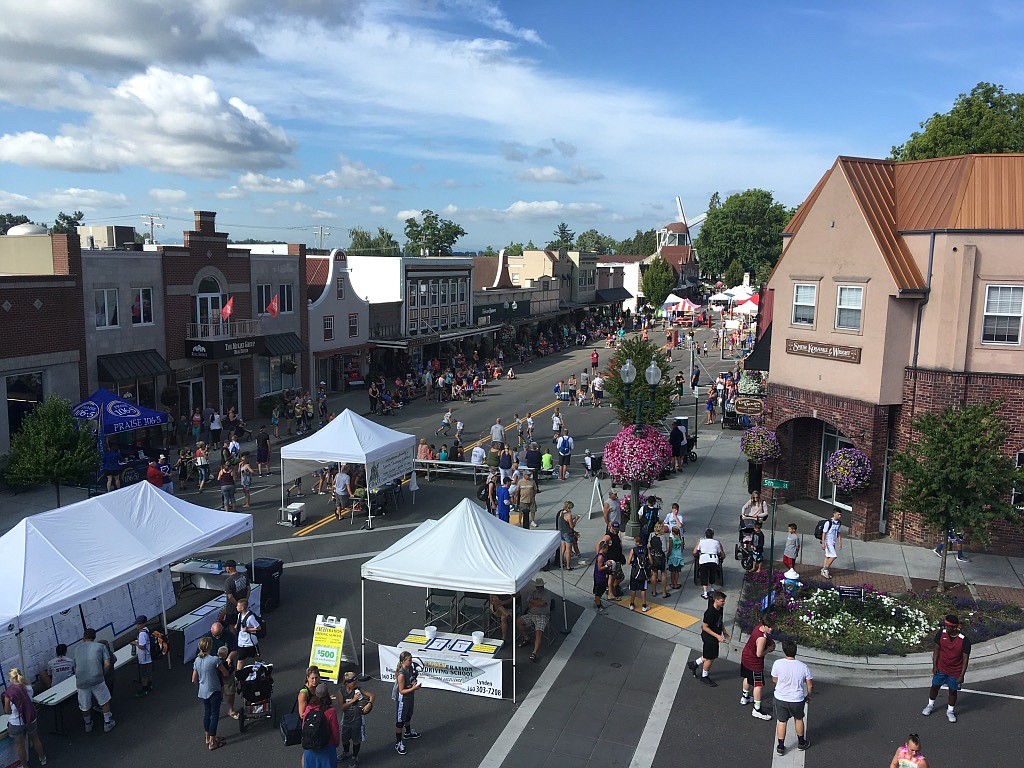 Several blocks of Front Street in Lynden will be shut down Friday and Saturday, July 15–16 for the annual Northwest Raspberry Festival and Curt Maberry Memorial Classic 3-on-3 basketball tournament. (Photo courtesy of Gary Vis)
By HAILEY PALMER
Staff Reporter

Berries and basketball don't always go together like bread and butter, but lovers of both fruit and sport, rejoice. The annual Northwest Raspberry Festival in Lynden is back this week.

While festival-goers are tasting wine and spirits or perusing other raspberry-related vendors and exhibits, the Curt Maberry Memorial Classic 3-on-3 basketball tournament will be taking place on Front Street.

The tournament was incorporated in the festival’s second year. Lynden Chamber of Commerce Executive Director Gary Vis said the first festival was somewhere around 30 years ago, but they weren’t sure on an exact year.

“It’s just grown from there,” Vis said. “We’ve got 16 courts, we close down Front Street and courts run from Sixth Street to Third Street and up Fifth Street.”

The tournament was named after local berry grower and Lynden sports figure Curt Maberry after he died in 2007.

“He was not only a local berry grower but a huge supporter of youth sports, and it just felt right” to name the tournament after Maberry, Vis said.

All age ranges are represented at the Curt Maberry Memorial Classic 3-on-3 basketball tournament. The Rookie Razz division consists of kindergartners through second graders. The main tournament is third grade and up with no maximum age. (Photo courtesy of Gary Vis)

Games in the tournament are played with a 25-minute running clock and a target score of 20 points. Shots are worth either one or two points.

The Rookie Razz division of kindergartners through second-graders will tip things off Friday morning before the main tournament starts at 3 p.m.

“We shut all the courts down [after Rookie Razz] and everything gets moved up two feet to regulation hoop size,” Vis said.

The main tournament has no age limit and sometimes brings in teams well into their 50s.

“If we can find two teams in the same age range we’ll put together a bracket for you,” Vis said.

As of Monday morning, Vis said a little more than 200 teams have signed up, which is right around the average they see every year. Each team will have three players on the court at a time and one bench player.

On a typical year, the festival draws thousands of people to Lynden and in addition to things starting to feel normal again, Vis said they’re looking forward to the street competition and the wide variety of skill levels that sign up.

“Occasionally, you’ll get a team from Western or some of the better high schools, so you’ve got that level of very experienced competition that knows what they want to do, but then you’ve got the Rookie Razz kids,” Vis said. “We don’t keep score, the parents do and the kids do, but we don’t. You have to remind them they have to dribble and can’t just walk and to pass the ball.”

After two years off due to the COVID-19 pandemic, Vis said he's looking forward to seeing people out again.

The final day of competition of the tournament will start at 8 a.m. Saturday and continue through the evening.