Seniors picket in front of Eleanor Apartments over rent increases

'Beautiful apartments, but it doesn't make a difference if you can’t afford it' 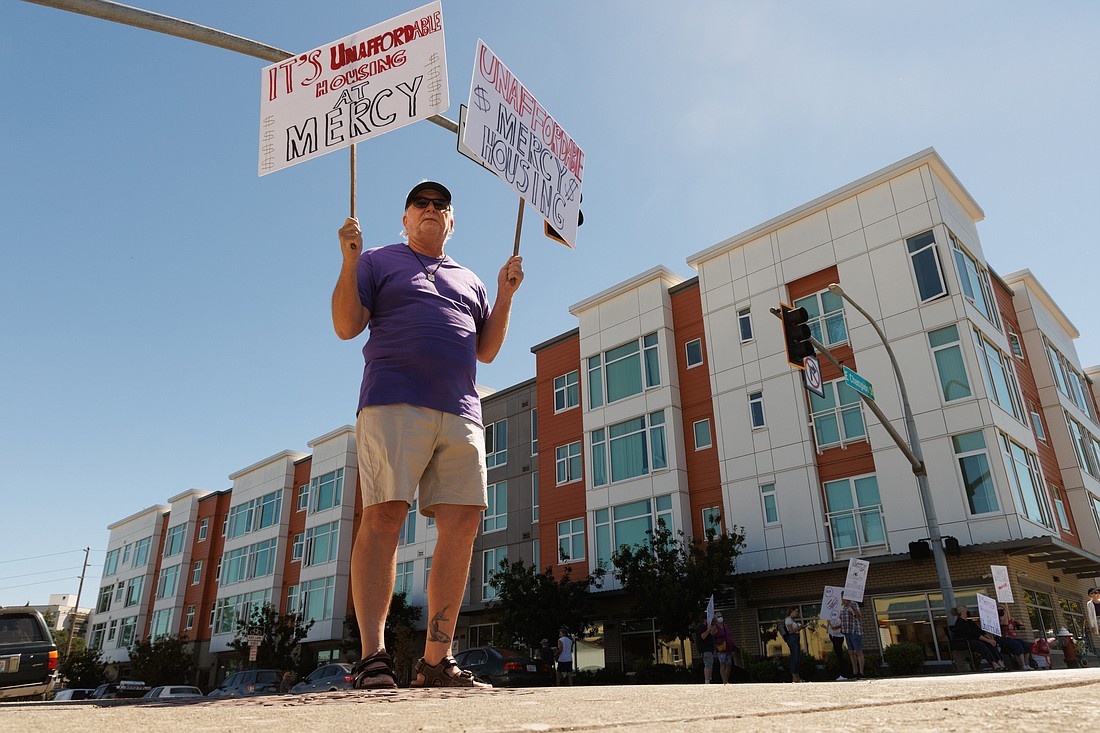 Along with a dozen others, Daniel Rinier, a resident of the Eleanor Apartments, protests on North Forest Street about another rent increase at the affordable housing complex. (Andy Bronson/Cascadia Daily News)
By CHARLOTTE ALDEN
Staff Reporter

Eileen Vining, 68, is packing her things. She’s planning to leave Eleanor Apartments at 1510 N. Forest St. — an affordable housing unit for low-income seniors — because she can no longer afford her rent.

Vining moved into Eleanor Apartments in October 2017, just after they opened, and in the five years since then, her monthly rent has gone up almost $200 per month.

Tuesday morning, a group of Eleanor residents gathered in front of their building, picketing to protest the most recent proposed rent increase that for some has been as much as $67 per month. For folks on fixed income, the increase is too much to afford.

Karina Davidson, 69, has also been living in the apartments since they opened.

“Based on Bellingham rent, [these numbers] all sound very low, but you’re dealing here with a senior, low-income housing building, so any increase for people who are living on social security is pretty hard,” she said.

Social security cost-of-living adjustments have hovered between 1–3% for the last few years, until 2021, when there was a 5.9% increase.

Davidson said they’ve had roughly $20-25 increases most years since she moved in, but have had two larger increases in those five years. Davidson said she was informed of her most recent increase of $67 in early July. Her rent is now $800 per month.

Residents and friends picket outside the Eleanor Apartments on North Forest Street on July 12. The protest was in response to another rent increase for the residents of the affordable housing complex. (Andy Bronson/Cascadia Daily News)

A July 6 memo from property manager Truk Tolstad outlines the recent increases to the apartments’ operating costs — costs for utilities, maintenance, grounds costs and property insurance have all gone up by more than 20%, while turnover costs had gone up 18%.

The memo also identified costs for a $76,000 sidewalk repair and $28,000 for automatic doors. The memo frames these costs as “the justification for [the] upcoming rent increase.”

Tolstad’s memo encouraged renters who feel the increase is an “undue burden” to contact the Mercy Housing office and management.

Kate Peterson, senior vice-president of marketing and communications for Mercy Housing, said the monthly increase later this year will be $39 or $67, depending on the residents’ income.

“The justification for the rent increases is that our costs to offer the apartments continue to increase,” Peterson said. “We are not immune to cost increases. Utilities, staff, repairs and property taxes, for example, have all increased in the past year.”

“[Mercy Housing is] going to have everyone in this building moved out and gone if they keep up with these increases because nobody is going to afford to live here,” Dawn said.

Catherine Chambers, 68, and Davidson said it’s important for Bellingham residents to be aware of what’s happening here due to the contributions from the City of Bellingham’s Home Fund.

“All the money that the city put in this property to build it — it needs to be affordable for the residents,” Chamber said. “But it’s not.”

Vining isn’t sure where she’ll go next once she moves out of the apartments.

“Nebraska or something,” she said. “I’ll just rent a U-Haul. Hopefully prices on the U-Haul go down a bit, hopefully gas will come down a bit. I’m saving everything I possibly can, and I’ll leave. Beautiful apartments, but it doesn't make a difference if you can’t afford it.”