Bow artist is far from washed up 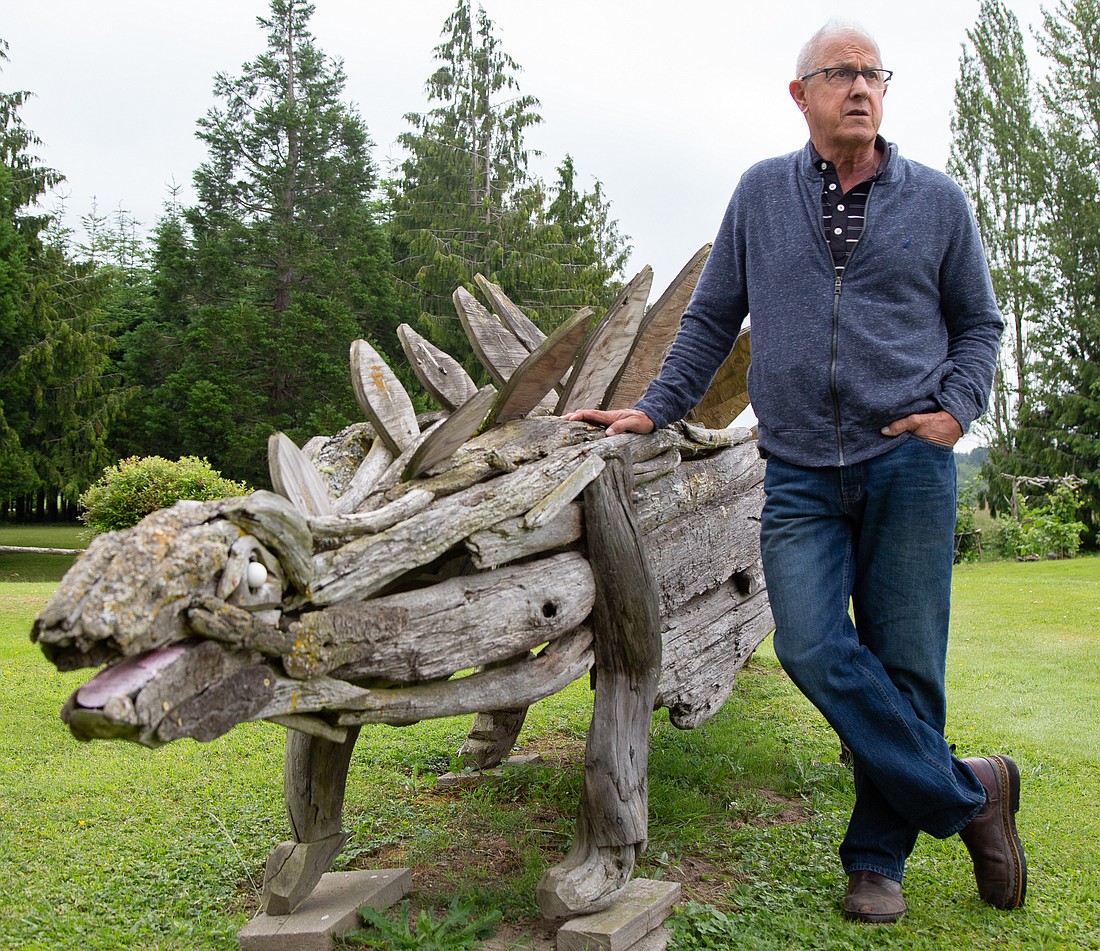 Joe Treat leans against his driftwood stegosaurus sculpture on display outside of his home in Bow on July 1. Other animals at Bowrassic Park include a horse, ostrich, kangaroo, alligator, bulldog and more. (Hailey Hoffman/Cascadia Daily News)
By AMY KEPFERLE
Staff Reporter

On our way to “Bowrassic Park,” my coworker took a wrong turn on Worline Road and we found ourselves parked at the end of a long driveway in front of a large yellow barn.

“This isn't it,” I said. “I'm pretty sure the driftwood sculptures we're looking for are by the side of the road.”

“Wait a minute ... is that a dinosaur?” she said, pointing beyond a small group of trees to the next property over.

Through the copse, we could see what appeared to be the pointy tail of a stegosaurus, and after turning around and returning to the main road, the large herbivore soon welcomed us to our desired destination. 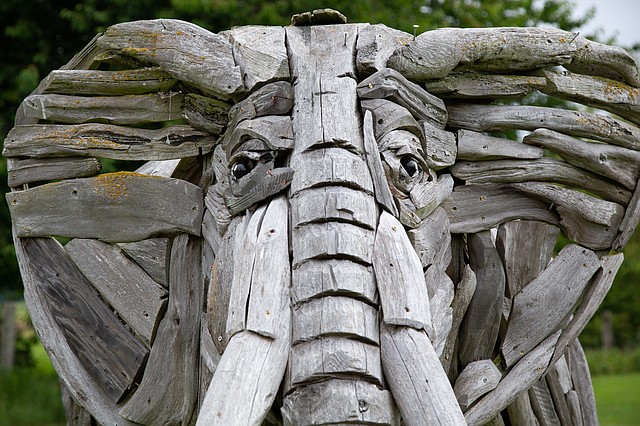 In addition to the Jurassic-era quadruped on display, a variety of other creations brought to life by driftwood sculptor Joe Treat dotted the landscape to the left of his house. Denizens of the zoo included a horse with a flowing mane comprised of narrow sticks, an elephant with mighty tusks, a nesting ostrich, a kangaroo with a joey in its pouch, a fearsome-looking alligator with a severed arm placed in front of its gaping maw, and a bleached-out bulldog with a wrinkled face and distinctive, pushed-in nose.

“I told him to stay about a month ago and he hasn't moved since then,” Treat, 69, said a short time later during a tour of the Bow-based property. “He's a good dog.”

Although we were invited guests, Treat said not a day goes by without people he doesn't know stopping to visit the assorted animals he's created in the six years since he discovered his nascent artistic talents. People regularly come across the assemblage without expecting it, hit the brakes and back up. More often than not, they park and get out of their car for a closer look.

As a semi-retired insurance agent for State Farm in Bellingham, Treat said he bought the house in Bow with the idea he'd put the shop on the property to good use by picking up a hobby. He attempted to make a table and chairs, but the measuring and finishing and assorted other tasks required for completion made for a “terrible” experience. 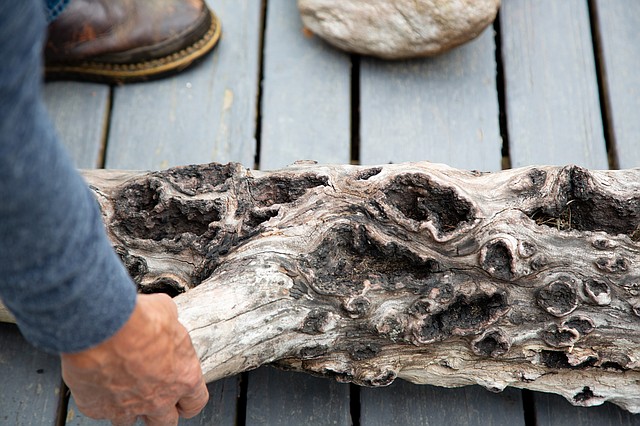 Treat grabs a piece of driftwood that he hopes to use as tentacles for an octopus sculpture he's planning. The interesting knots in the wood resemble octopus suction cups. (Hailey Hoffman/Cascadia Daily News)

Not long afterward, while in Thailand with his wife, they visited a small village where woodworkers were making full-sized horses out of teak root. The pieces inspired him, and after returning to Bow, he tried his hand at the art form by making a triceratops and placing it in the field where the present-day animals reside.

With no art or woodworking background, Treat wasn't expecting much of a response to his work. He was wrong.

“Within days, people were knocking on my door and wanting to buy it and calling me an artist,” he said. “I thought, OK, I like that.”

Six years later, Treat has made more than 110 sculptures out of his preferred medium of driftwood. Many have sold — some to private buyers who follow his Facebook page and call dibs on finished pieces, others to businesses or galleries. A few years ago, the City of Anacortes acquired two of his giraffes for its Madrona Grove Sculpture Garden, and his work can also be seen at Price Sculpture Forest in Coupeville on Whidbey Island, and in Roche Harbor at San Juan Islands Sculpture Park.

“I never meant to sell them,” Treat said, noting he rarely does commissioned pieces. “I'm just having fun. I'm trying not to turn it into a business, because I don't want to lose my joy.”

Treat looks at a mermaid driftwood sculpture he's working on in his workshop. Treat said he's been working on the sculpture for weeks, adding, changing and removing pieces. (Hailey Hoffman/Cascadia Daily News)

Part of the process Treat said he loves is visiting local and regional beaches a few times a month to find the driftwood that becomes everything from great blue herons to grizzly bears, bald eagles, giant spiders, zombies and more. (Don't worry, he stays away from national parks and places where collecting driftwood is illegal.)

Treat said he likes to imagine the life of the wood that makes its way to his “boneyard” of collected pieces drying out by the side of his house and garage.

“Say it begins on Mount Baker, tumbles down a rocky creek, goes into a big river and rolls around there,” he said. “Maybe it gets stuck up against a bridge for a couple of years, then goes into the ocean and gets all beat up, and then ends up on the shoreline.”

“And then you turn it into an elephant,” my coworker said. 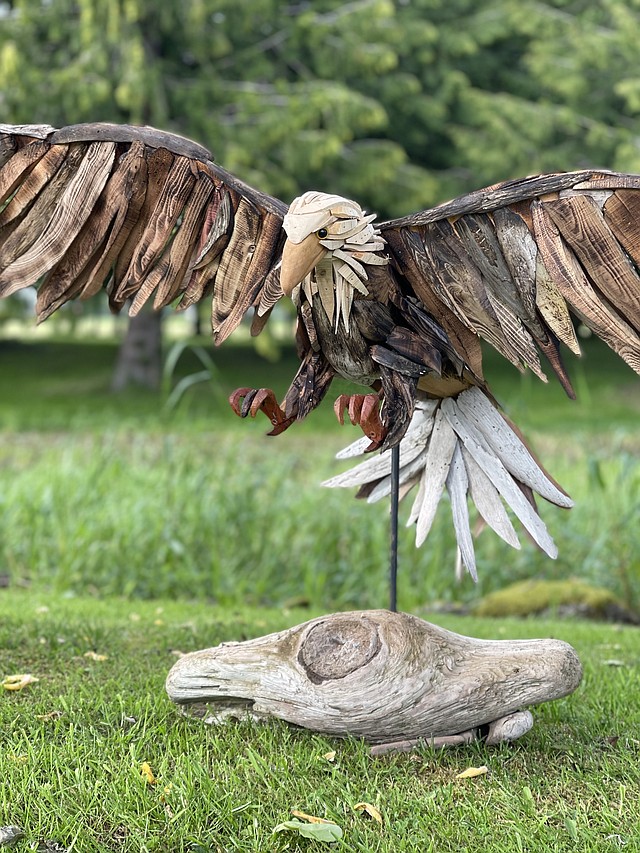 Among the many creatures Treat has brought to life over the last six years are a number of bald eagles. Some are in flight, while others are perched on pieces of driftwood. (Photo courtesy of Joe Treat)

If you're lucky enough to get a tour of Bowrassic Park, make sure to peek inside Treat's work areas to see what he's currently creating. The day we visited, a mermaid was awaiting her finishing touches, and various other projects were in the works, including an octopus, a tortoise and a small dachshund.

Treat's main tools include two band saws, a chainsaw and deck screws, but it's clear his most valuable asset is his imagination. What started off as a hobby has turned into a way to connect with other people, and along the way, he turns driftwood into the occasional dinosaur.

When asked if he had advice for other people looking for a creative outlet who think they might be too old to master something new, Treat said to just try it out.

“Just try something. Ask questions. I think everybody has something they do better than others. It's never too late to find your passion.”

Find Bowrassic Park off the beaten path at 6751 Worline Rd. in Bow. Visitors are always welcome to park and take a look at the sculptures, and those wanting to set up a tour can email Joe Treat at jtreatster1@gmail.com. Peruse more of his work at washedupcreator.com.