Despite no longer having ownership over land, Nooksack Tribe works toward bettering land 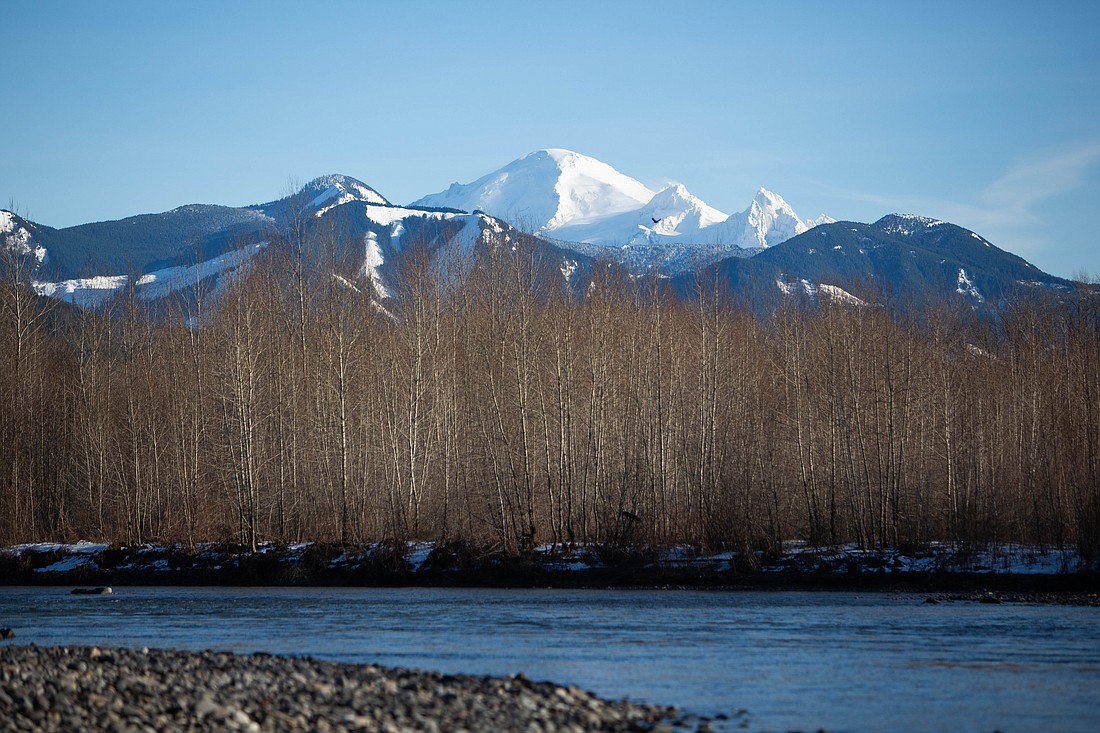 The Nooksack River flows beneath Mount Baker near the Nooksack Indian Reservation on Sunday, Jan. 9. The Tribe is leading the effort of a climate-adaption plan to preserve their ancestral lands and the surrounding region. (Hailey Hoffman/Cascadia Daily News)
By KAYLA HEIDENREICH
Staff Reporter

The Nooksack Indian Tribe’s original territories spanned from the crests of the North Cascades to the shores of Puget Sound, extending into Canada and down to Mount Rainier. Now sitting on a 2.2 acre reservation in Deming, the Nooksack people are creating climate-adaptation plans to protect not only their ancestral lands, but also the community within it.

“Nobody told us to do this work,” said Oliver Grah, the tribe’s water resource director. “We just saw climate change being one of the biggest threats to the tribe’s ability to harvest treaty resources in the future and you can’t wait for the impacts to get worse to do anything about it, you have to start now.”

The Nooksack Tribe partnered with the University of Washington’s Climate Impacts Group for this work, to try to bridge the gap between climate science and on-the-ground action. The adaptation plan is based on the Nooksack and CIG’s 2017 work, the Nooksack Indian Tribe Natural Resources Climate Change Vulnerability Assessment. The tribe sees the adaptation plan as the crucial, action-oriented, next step.

Harriet Morgan, a research scientist of seven years for the group, has been a huge part in working side-by-side with tribal members to make sure this work is done in the right way.

“Climate resilience is not something that can be done in a vacuum, it needs to be an effort that is a patchwork of different agencies, institutions, tribes and communities who are working together to build it,” Morgan said. “No one has the authority, the motivation or the jurisdiction to do it on their own; it needs to be this collaborative effort.”

“I do think [the action plans] are all necessary,” Morgan said. “They’re like ingredients. You can’t bake a cake with just sugar, you need flour and eggs and all this other stuff too. It’s the same for building resilience to climate change.”

The Tribe is implementing this adaptation plan directly into current local projects, such as the Stewart Mountain Community Forest Initiative. Stewart Mountain, on the northeast side of Lake Whatcom, is part of the South Fork Nooksack watershed, in the ancestral homelands of the Nooksack Tribe. 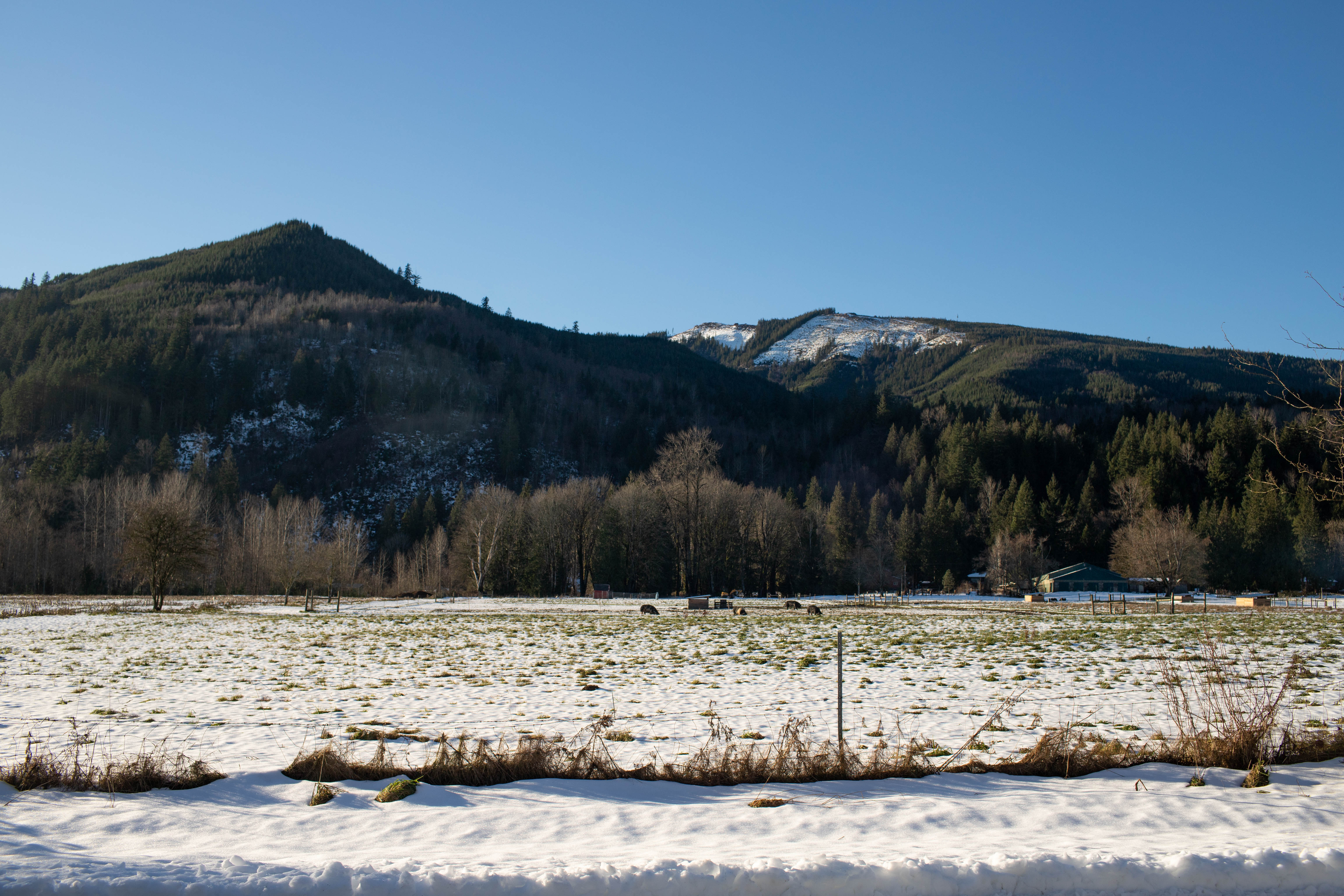 The Nooksack Indian Tribe has spurred an initiative to regain local ownership of Stewart Mountain, on the south side of Lake Whatcom. (Hailey Hoffman/Cascadia Daily News)

The goal of the initiative is to regain local ownership of the mountain’s forestland, which has been in the hands of a New Hampshire timber investment company since 2017. According to Stewart Mountain Community Forest Initiative, “Key stakeholders joined the Nooksack Indian Tribe to form a collaborative group to explore opportunities to acquire the property and establish a community forest on Stewart Mountain.”

Putting Stewart Mountain back into community stewardship would allow the tribe to implement pieces of its adaptation plan into action and focus on building climate resilience within both the riparian and forest ecosystem. Both are considered vulnerable in the tribe's reports.

Stewart Mountain would serve as a model for the management of a community forest and changing the harvest rotation of trees. On Stewart Mountain, trees will be harvested every 80–100 years and old growth forests protected. Currently in the upper watershed of the Nooksack, commercial forests are harvested at 40 years. If regulations within commercial forestry were changed and forests grew until 80 or 100 years before they were harvested, Grah believes there would be a big influence on more water in the Nooksack River in late summers.

“What explains that difference is what’s called the transpiration rates of young trees versus old trees,” Grah said. “Young trees are rapidly growing so they utilize incredible amounts of water to grow, where mature and old growth forests, even though the trees are bigger they use less water because they aren’t rapidly growing.”

Bringing commercial forestry into the conversation of water use is something Grah has been working on, with hopes that based on the research done in the adaptation plan, the tribe can work with the forest industry and voluntarily get them to modify the age of harvest rotation.

Nooksack Tribal member and the tribe’s planning manager, Ross Cline Jr., has always noticed subtle changes in Nooksack territory due to climate change. The biggest change has to do with the Nooksack River.

“As a child I remember my dad would be fishing, it seemed like, months at a time. He would be fishing just here in the [Nooksack River],” Cline Jr. said. “Now, we are limited to one to two days a week, and only between nine-to-twelve-hour openings.”

Some of the tribe's most in-depth work, showcasing the vulnerability of the riparian ecosystem, is with the Sholes Glacier located on the north side of Mount Baker.

“The data set that we’ve assembled starting in 2012 through today is probably the most unique data set of any organization researching glaciers in the lower 48 states,” Grah said. “We’ve been taking measurements since 2012, and through this year the glacier has receded about 400 feet, the glacier has thinned about 50 or 60 feet, and has reduced in area by about 25–30 percent.”

The Sholes Glacier is one of the many glaciers that flow into the Nooksack River. The river's upper Middle Fork contributes water periodically, through a diversion pipe, to Lake Whatcom, which provides drinking water to over 100,000 people, approximately half of Whatcom County’s residents.

“Our rivers are our sources of water, and whether it’s for fish in the river, communities, municipal use, or for the agriculture industry, that water supply is going to continue to diminish,” Grah said. “We’re probably looking at, it could be as high as, 50 percent reduction in stream flow in the Nooksack River by this late century due to the effect of climate change and the loss of glaciers.”

The Nooksack River is a lifeline connecting all of Whatcom County. With the tribe’s adaptation plan and projects like the Stewart Mountain Community Forest Initiative, Grah believes the tribe is leading the way toward climate resilience in Whatcom County.

“It’s all really an interesting story,” Grah said. “It shows you, the Nooksack Tribe is a small tribe, but if a tribe is persistent in pursuing certain issues related to treaty resources, they can be successful in getting a big change to occur.”

Cline Jr. sees other agencies using the Nooksack climate planning documents to help set their own regulations and is excited. 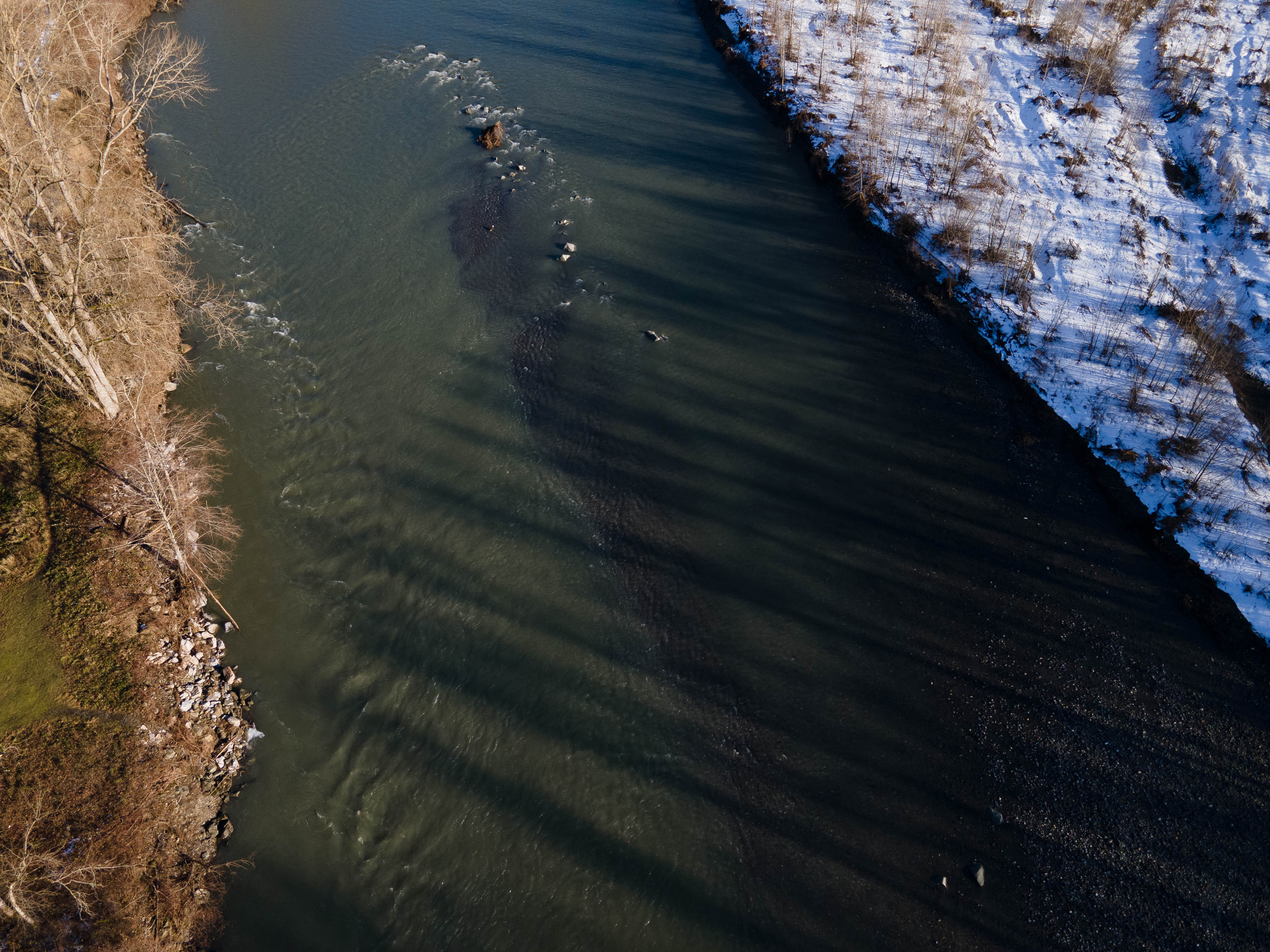 The Nooksack River has been significantly impacted by climate change, according to Ross Cline Jr., a Nooksack Tribal member and the tribe's planning manager. (Hailey Hoffman/Cascadia Daily News)