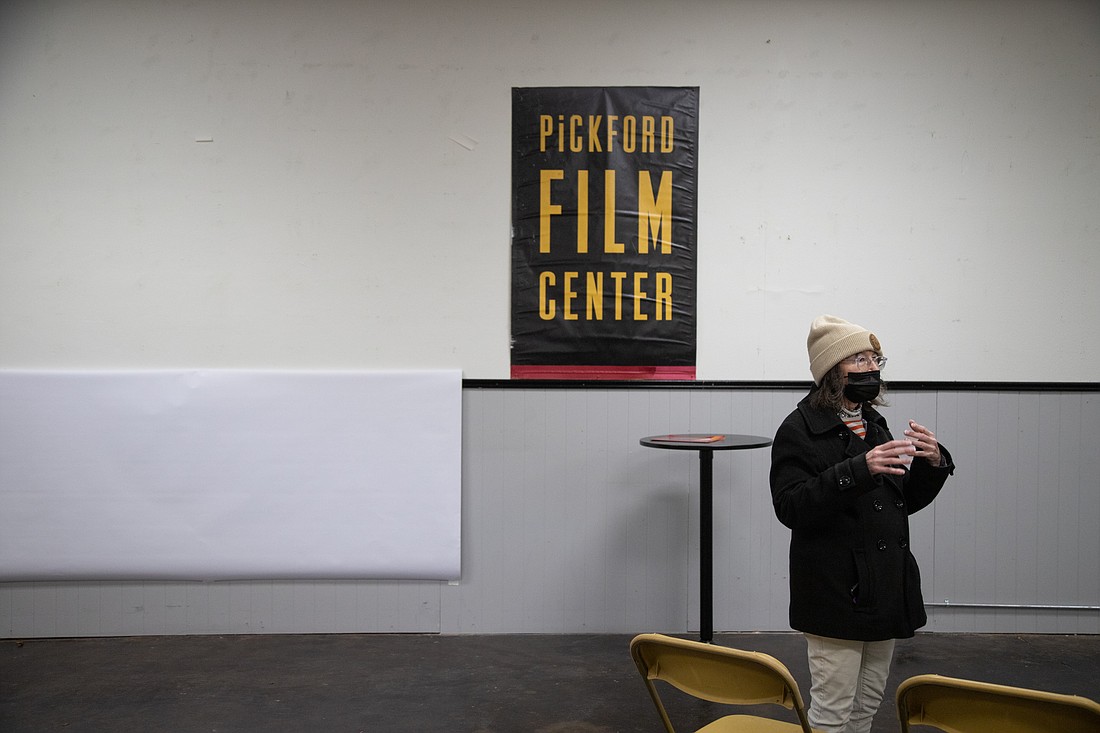 Susie Purves, executive director of the Pickford Film Center, stands in the currently-vacant commercial space off of Grand Avenue in Bellingham on Friday, Dec. 10, 2021. The space will be the Pickford's new three-theater venue. (Hailey Hoffman/Cascadia Daily News)
By AMY KEPFERLE
Staff Reporter

Susie Purves has the ability to see into the future.

On a rainy mid-December afternoon, Purves, the executive director of Bellingham's Pickford Film Center (PFC), stood in a room with low ceilings, fluorescent lighting and a smattering of mustard-yellow folding chairs. Behind her, a wall was plastered with posters touting films such as “No Ordinary Man: The Billy Tipton Documentary,” “Welcome to the Dollhouse” and “The Cabinet of Dr. Caligari.” Nearby, an architectural rendering of a proposed floor plan for a new theater, the Pickford on Grand, provided hints about what Purves and the PFC board have been up to in recent months. 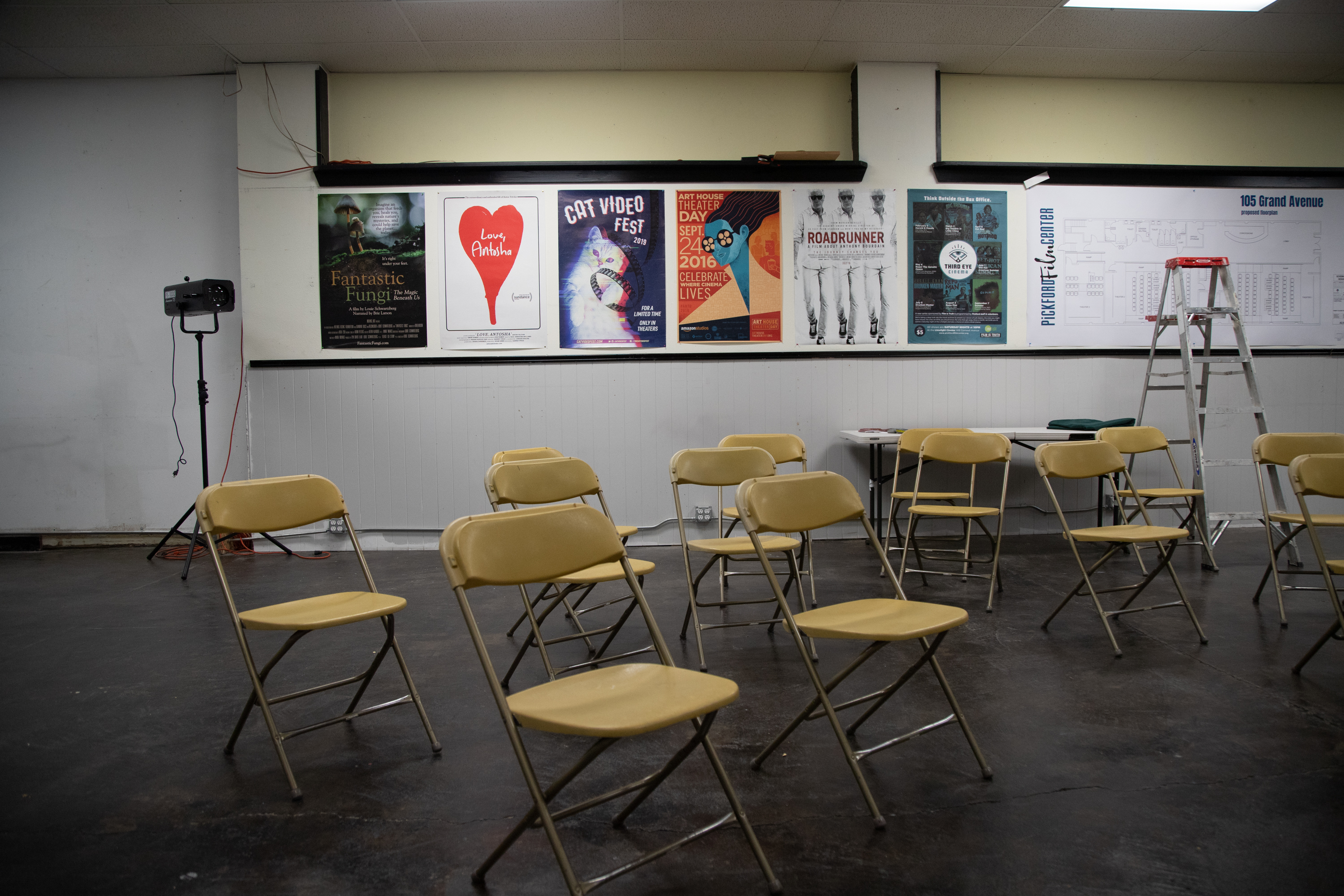 Although the former Sabbath Tattoo space at 105 Grand Ave. is vacant right now, Purves said she can already begin to envision what it will look like when the false ceiling is removed and contractors have uncovered the hidden mysteries of the building and transformed it into a three-theater venue — two with 70 seats, and another, a "jewel box," with 20.

"It's not going to look like the other one," Purves said. "We want to have something different, but we're not quite sure what that is. I'm leaning toward a cool art-deco theater, but there are so many things that can be done now that we didn't have access to when the first theater was built, like large video displays, signage and different kinds of ticketing configurations."

One thing that will stay the same, Purves noted, is the Pickford’s ownership of the building the new theater will be housed in. That wasn't the case with the Limelight Cinema on Cornwall Avenue, which was where the Pickford originated in 1998. When it became clear that screening independent, foreign and documentary films was becoming increasingly popular with local audiences, and the small space couldn't house all the films and people it wanted to, the PFC began to think big.

In 2004, the corner building at 1318 Bay St. was purchased, and after an ambitious capital campaign that raised $3,250,000, plus a loan from Bank of the Pacific, construction began. Six years later, the doors to the Pickford Film Center opened. The original theater was renovated, renamed the Limelight, and acted as a third screen that made it possible to show more films, plan longer runs, host larger festivals and offer increased capacity. When the decision was made to shutter the Limelight in September 2020 due to the pandemic, it was a blow.

Purves said as soon as they left the Limelight, the PFC board and staff started discussing how it could be replaced. In early spring, they considered leasing a space, but a temporary lull in the commercial real estate market made it possible to consider purchasing another building. At the end of the summer, they made an offer on the Grand Avenue locale, and it was accepted.

"We're very excited to be able to have more, more, more at the Pickford on Grand," Purves said. "Right now we're constantly juggling with the two screens we have. We have a new program director who's really excited about getting all sorts of things on the screen, but the way film booking goes is that if you want a first-run opening feature, you have to commit to at least two weeks to a clean screen with nothing else on it. It's really limited what we can do and how we can serve the community, and all the different parts of the community."

Although the Pickford on Grand likely won't open until sometime in 2023, Purves is already imagining how it will benefit the downtown Bellingham Arts District by getting more people on the streets, supporting nearby restaurants, bars and cultural mainstays such as the Whatcom Museum and Make.Shift Art Space.

As of December, the PFC had raised 20% of its budget for the Pickford on Grand, with a goal to raise $1 million by May 2022 through another capital campaign. Because they own the building and part of it is currently occupied by the Unknown Board Shop — which the PFC is hoping to help find a new home for in the downtown core — it's not a huge financial risk for the PFC to take their time and make sure they get it right.

Meanwhile, the Pickford on Bay Street has seen an increase in patronage since reopening in May with an improved air system, advanced cleaning protocols and staggered seating. Purves said they're keeping audiences even safer by requiring masking and proof of vaccination at the door.

Still, she said, she's looking forward to the days when the PFC can return to its full slate of community offerings such as Doc-Ed, which every fall sees approximately 5,600 middle school students bused to the Pickford Film Center to view documentaries and get a closer look at different points of view from around the world. They weren't able to offer the educational series this year, but the locally produced horror film festival "Bleedingham" made a comeback in October, and a Treaty Day Film Festival returned in January. 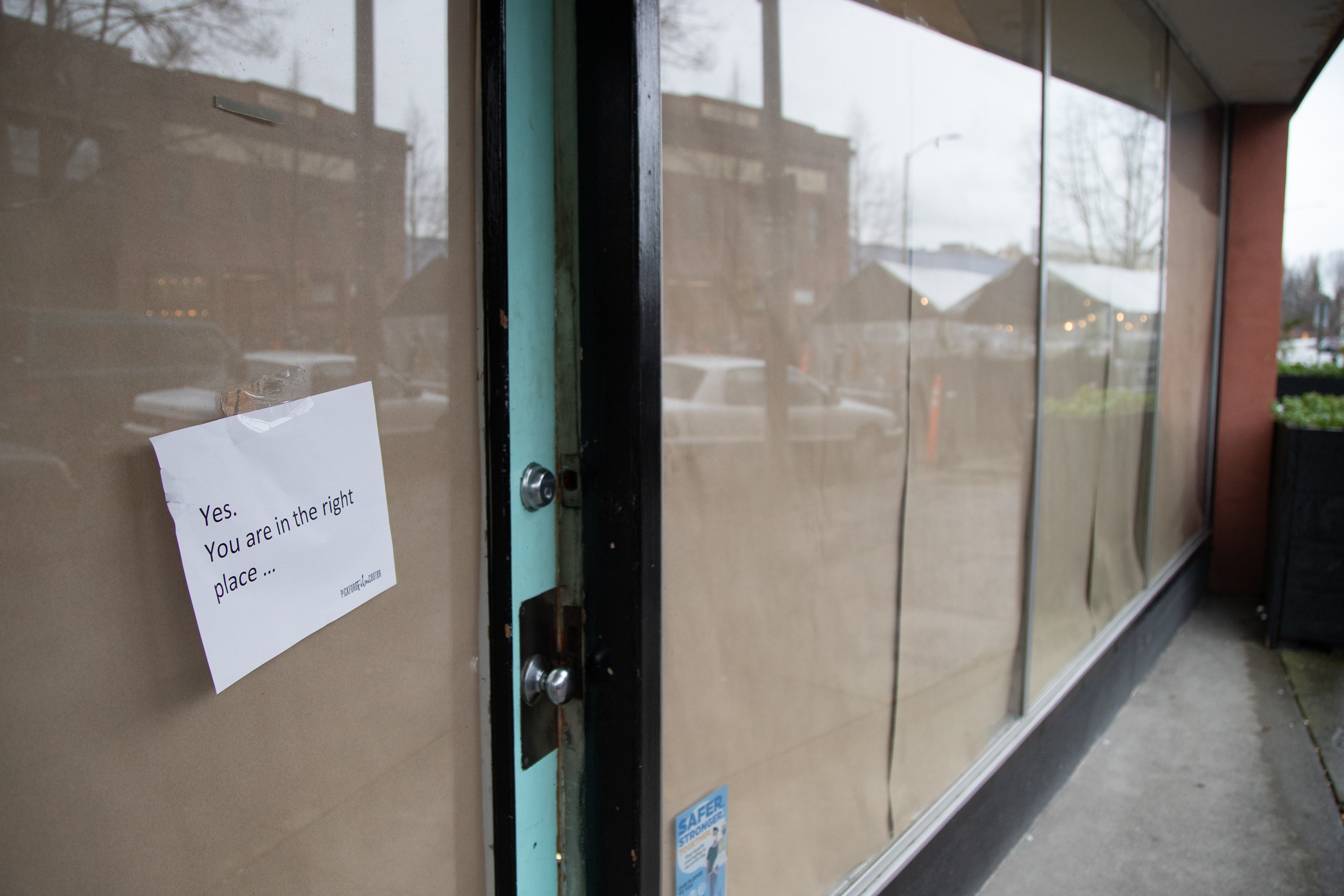 A sign which says, "Yes. You are in the right place..." hangs on the door of the parchment-paper covered venue. (Hailey Hoffman/Cascadia Daily News)

Although it'll be a while before the Pickford on Grand opens its doors, Purves is looking ahead to the days when the PFC has five screens to choose from, meaning on any given day patrons might be able to watch a documentary, the latest Wes Anderson film, a Rocket Sci-Fi flick, or a Kid Pickford offering. And, although she acknowledges streaming services such as Netflix have changed the film distribution game, she believes watching movies in a real theater is the best way to elevate the experience.

"To be really true to the art form, to really serve the artists and filmmakers, you've got to see the film on a big screen," Purves said. "Also, it's more fun that way. When you gasp, everyone else is gasping. When you laugh, everybody else is laughing. It's a great experience that is really lost when you're watching a film in your living room. I think there's much more of an investment on one's attention, and intention, when you go to the movies."

To find out more about donating to the Pickford on Grand’s Capital Campaign, go to www.pickfordfilmcenter.org