Some feel helpless, some want the US to do more 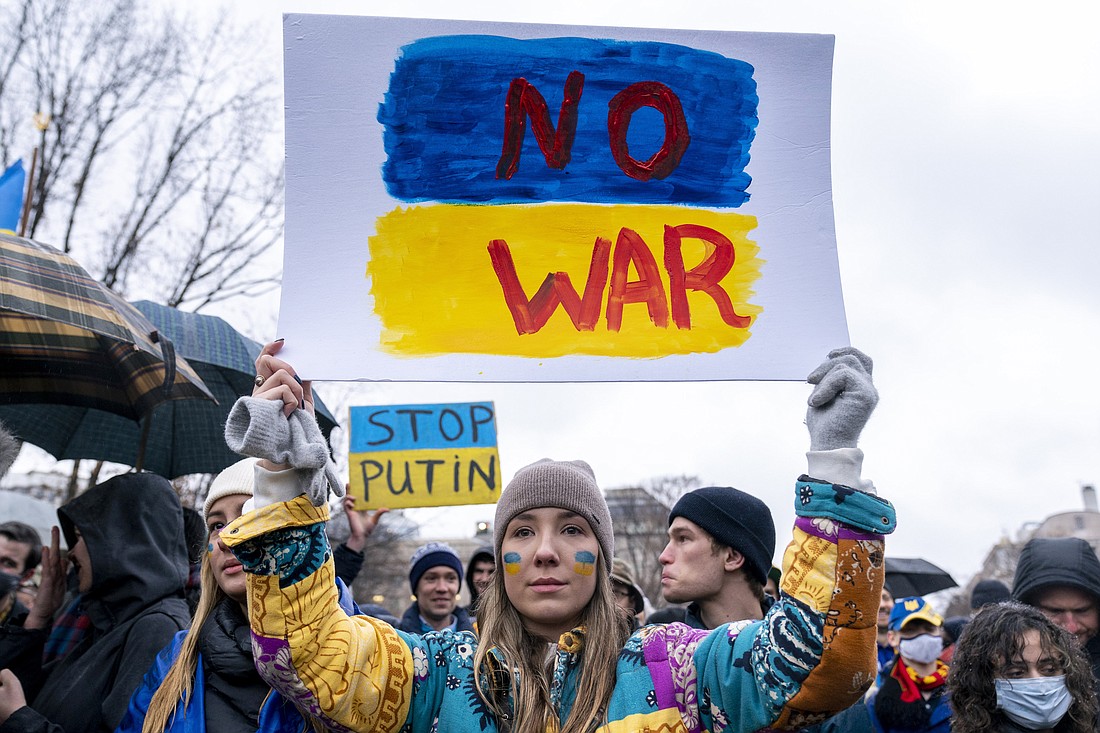 A tear rolls down through the colors of the Ukrainian flag on the cheek of Ukranian Oleksandra Yashan of Arlington, Va., as she becomes emotional while holding a sign that reads "No War" during a vigil to protest the Russian invasion of Ukraine in Lafayette Park in front of the White House in Washington, Thursday, Feb. 24, 2022. (AP Photo/Andrew Harnik)
By KAI UYEHARA
Staff Reporter

Ukrainian immigrant Lyubov Farmahey has had to turn off the TV news this week.

If she watches too long, she said Friday, the Bellingham mother of five struggles to sleep. When she does finally fall asleep, she has nightmares about her homeland under siege from neighboring Russia.

Farmahey, 31, is one of many Whatcom County residents with relatives living in Ukraine, which is facing perhaps the biggest aggression in Europe since the end of World War II.

“It’s very scary for me for them to live there,” said Farmahey, who has been in Bellingham for 16 years.

As Russian troops entered parts of the capital Kyiv on Friday, Ukrainian President Volodymyr Zelenskyy beckoned his fellow countrymen to stay and fight.

“You cannot give up the capital,” he said in a video message. “We must survive this night.”

Tensions were high for Ukrainian Americans in Whatcom County who said Friday all they can do is pray and watch from a distance.

“God's probably the only one that can figure it out and stop it,” said Nazar Gamdysey of the Ukrainian Evangelical Church that is temporarily located in Ferndale.

Farmahey also expressed a feeling of helplessness as Russian armored vehicles rolled through parts of Ukraine making it difficult for donations and supplies to reach her compatriots.

“So for us, to help them right now is just prayer,” Farmahey said. “Nothing will help, no donations, nothing because everything is closed.”

Gamdysey, who has uncles living in Russia and Ukraine, said the conflict takes a toll on Ukrainians and Russians alike in Whatcom County. At his church, Ukrainian and Russian Americans congregate together as brothers and sisters, he added.

Gamdysey, 41, said the church leadership does not want to take sides but instead come together as a community to pray for relatives in Ukraine.

He said having uncles living in warring countries makes the conflict feel like families fighting.

“You don't know what to say,” said Gamdysey, who lives in Blaine. “You just want it to stop.”

“God's probably the only one that can figure it out and stop it.” — Nazar Gamdysey, Ukrainian Evangelical Church, Ferndale

Farmahey has shielded her youngest three children from the news, worried they might suffer from nightmares like she has been experiencing. But her teenage boys are aware of the invasion and feel the pain as much as their mother.

The Slavic community is worried about speaking publicly because of possible repercussions for relatives living in Ukraine.

One immigrant who has lived in the United States for almost three decades asked that his last name not be used because of concern for family in eastern Ukraine. But Jacob, 54, of Custer, wanted the world to know how much pain his fellow immigrants feel.

“It's hard to see that the rest of the world is just watching,” Jacob said. “Sanctions don't stop the rockets that are falling on Ukrainian cities.”

She and her husband Maksym Kovalenko want to see more done by the international community.

“We need NATO troops to help us because while sanctions are a long-term solution, we need help right now,” Liliya Kovalenko said.

She and her husband have called for sanctions against Russian President Vladimir Putin and “every oligarch and propagandist” in the country as well as the Russian central bank.

They want to see a major escalation with NATO air support.

“Ukrainians are doing what they can, and they're fighting back, but right now, we have to support them, we have to give them more,” Maksym Kovalenko said.

Liliya Kovalenko worries that the conflict will reach her parents’ home in western Ukraine near the Polish border.

“At first, I thought that maybe that's the safest place in Ukraine to live, but right now, there is no such thing as a safe place in the country at all,” she said.

Maksym Kovalenko expressed shock that Putin sent troops into his homeland even though Russia invaded and eventually annexed the Crimean Peninsula from Ukraine in 2014.

Donations can be made at the Ukrainian Association of Washington State’s website and on its Facebook page.