Just don't call him the 'Traffic Emperor of Bellingham'

Talking transpo with an architect of your daily drive 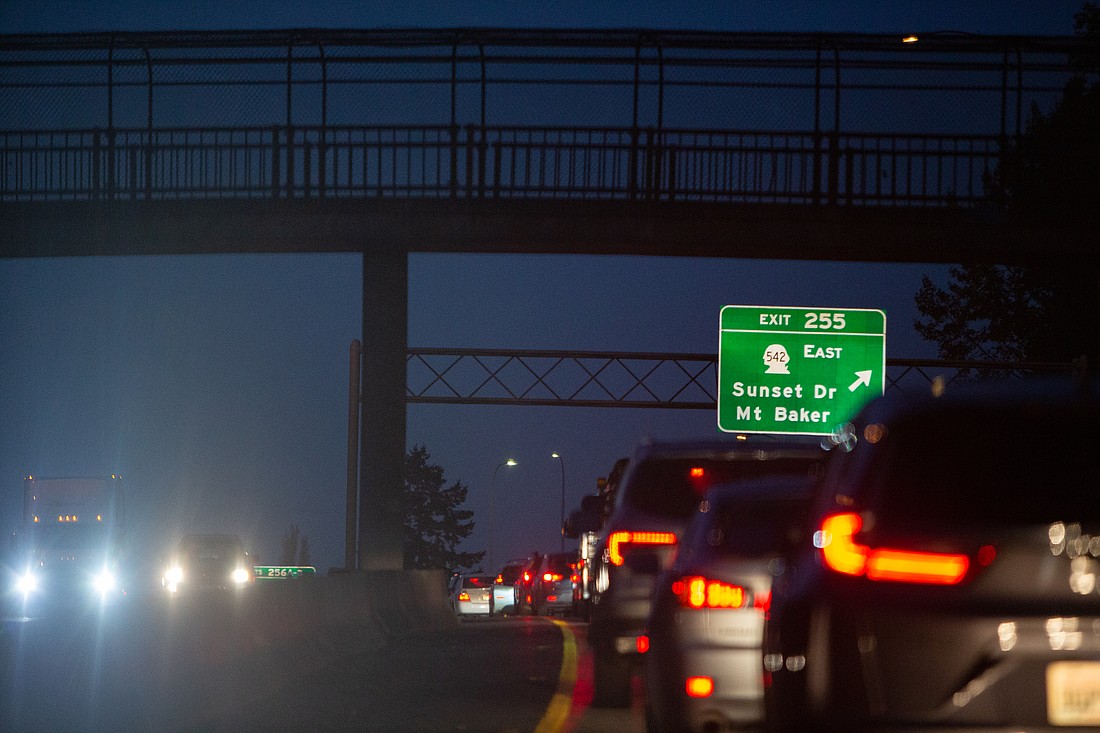 A line of cars head north on I-5, passing the often-traffic-clogged Sunset interchange in Bellingham in October 2021. (Hailey Hoffman/Cascadia Daily News)

The rant was all teed-up; snark gun fully cocked and loaded.

Comeau, who for 20 years has been planning our traffic and avoidance thereof, has been quoted over that tenure in provocative ways. A few years ago, he publicly proclaimed that traffic congestion was a sign of civic success, of sorts. You know: Confirmation that folks want to live here. So the city must be doing something right.

Comeau sort of doubled down on that in our traffic piece, in which our fledgling newspaper ended its first week by boldly asking: Does Bellingham now have a rush hour?

Our answer: Well, yeah. But, as our story noted, it’s all relevant, based on the length of time served on streets along the shores of Bellingham Bay and, especially, by degree of time removed from a greater traffic hell someplace else (not to mention any names, like Seattle).

It's all about choice

True. But still frustrating, and fuel for a burning question: Shouldn’t the city’s lead traffic-planning guru at least be able to feign some compassion for the soccer parents and delivery drivers for whom rush-hour commuting is not, in fact, a choice, but a necessity of American life?

Turns out, the man does sympathize — to a point.

This became clear during an extended chat on Tuesday, during which Comeau and a nosey editor covered a lot of ground about local transportation choices.

Comeau lifted a few eyebrows Sunday by suggesting in our story that traffic-jammed locals often have “alternative routes” to avoid backups, even in areas where choices at first glance seem limited.

It’s clear, he told me, that not every backup has a Plan B. There's no secret tunnel kept hidden from newbies needing to get on Interstate 5 via the living-hell on wheels that is Sunset Way, Guide Meridian or Samish Way/Lincoln Street.

“The solution is in the mirror. If people are unhappy, they need to look at their own behavior.” — Chris Comeau, Bellingham transportation planner

But Comeau noted that, for many of us, the need to get on I-5 itself is a choice, and the number is semi-shocking. A recent state DOT study revealed that half of in-city I-5 traffic truly is in-city. People are using the freeway as a “super arterial” to get from one end of town to the other, stuck in yester-year thinking that it's the fastest route — which during many hours, it still is. But not all.

This puts more people in the same places, fighting for freeway access, more of the time.

Further, he said, other jammed thoroughfares, case in point Lakeway Drive, which moves great batches of the 10,000 people who live around Lake Whatcom into and out of town, often is clogged by commuters who could veer off it onto other routes. Example: Inbound motorists can cut north at Woburn and find a couple different means to scoot under the freeway, besides the Lakeway/Holly corridor.

(He's right about that. Although Woburn is its own clogfest these days, as Barkley Village and Alabama Hilltoppers know all too well.)

Bring on the bike bickering!

Comeau also feels the pain — if not a full doubled-over, at least in localized, dull-ache fashion — of residents who get cranked up about replacement of vehicle lanes with bike lanes that seem to be empty, at least during the dark-and-icy parts of the year.

“We can’t change the darkness in the winter, the moisture, or the hilly terrain,” he said. “Those are variables that we don’t have control over.” But on an annual basis, he insists, the numbers are rising.

And he confesses impatience with people clinging to the notion that more and better roads are problem solvers, even if they were possible.

“Bellingham is growing. Just like every growing city in the U.S., there’s growing pains that come with that,” he said. “However, we’re doing a much better job than other cities trying to look for alternatives.”

A few things are happening — some of which, like the recent opening of the Birchwood Avenue underpass connecting the growth-primed King Mountain area with north downtown — are significant. This is a rare breaching of the wall that the state imposed on our fare city decades ago by ramming I-5 right through its gut, setting in motion many of the backups that exist today, made worse by substandard freeway ramps that don't meet current standards.

More often, the city is faced with squeezing an increasing amount of bodies, bikes, cars and other moving parts through space dictated by choices made long ago. And resources split among those users, Comeau suggests, is guided, yes, by science and proven design techniques — but also by politics, and the degree to which city residents engage.

He's steadfast in his position that one sort of loses the right to grumble if they refuse to take the time to participate in public processes.

“I’m not the Emperor of Transportation,” Comeau said with a chuckle. “I don’t have a magic wand. We’re quite literally following a recipe that has been decided by the community over many years.”

A larger point made

His point is relevant to our current situation in the country and here in the 'Ham. As a society, we have of late become unplugged from local government, by choice or necessity. That vacuum has been filled to some degree by folks who are activists, with specific agendas.

To be crystal clear: God bless 'em. Their motives are mostly pure, and they’re guided by righteous passion. But when they act on the civic stage alone, in small numbers — without buy-in — they create outcomes that the rest of vox populi discovers, usually years too late, aren't welcomed.

That’s the fault of every Netflix-streaming one of us. But also, to some extent, of our institutions. That includes media that have failed to keep doors and ears to the ground, acting as a surrogate for the public. And it includes local governments which, during our present crisis in democracy, no longer have the luxury of sitting back and grumbling about apathy.

They need to reach out. So do we all. That includes your local newspaper. And civil servants, as well.

Comeau told me his enduring frustration is attempting to plan traffic in a town — not unique — where most of the traffic grumblers are sitting, day after day, in a car alone. That makes our current primary transportation system operate, at best, at about 25% efficiency at any given time.

“The solution is in the mirror,” Comeau said. “If people are unhappy, they need to look at their own behavior.”

“Chris,” I said, “you’re talking about an idealized situation here. I’m talking about reality — human behavior. I’ll be totally honest: I like to bike to work myself, but I’m not doing it in the winter. I got to my office today in a vehicle — by myself.

To which the non-Emperor of Bellingham Traffic paused and said, “Well, same thing. But …”

Those buts are what drive us. Or stop us in our tracks.