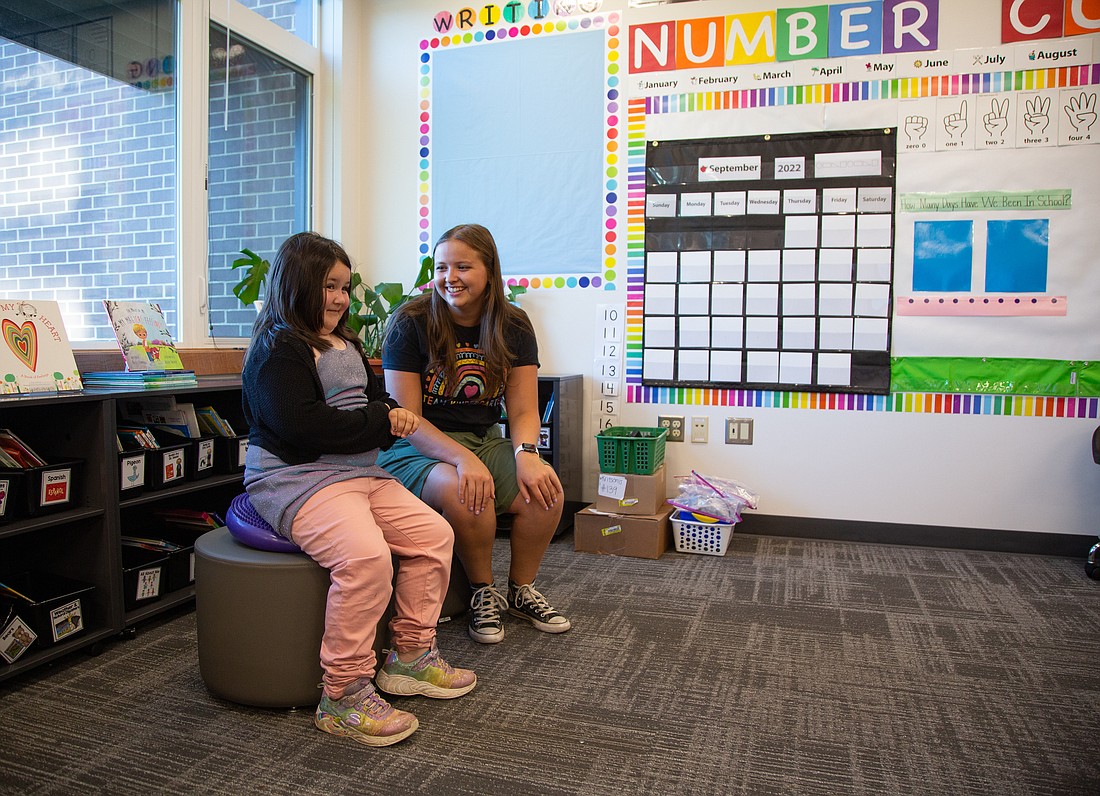 Kindergartener Claire Hagan, left, tries out a "wiggle seat" while getting a tour of her new classroom from teacher Kalli Kritsonis at Sumas Elementary on Aug. 29. The school hosted a welcome back event prior to the start of school for families and teachers to reunify after months of separation caused by the flooding. (Hailey Hoffman/Cascadia Daily News)
By HAILEY HOFFMAN
Staff Reporter

SUMAS — Students, teachers and families cheered as the school board and administrators cut the ribbon to the brand new Sumas Elementary during Monday's welcoming ceremony.

Beaming middle school students led tours of the shiny, new facility, and teachers stood posted in perfectly organized classrooms waiting to meet this year's crop of elementary students and their parents. Some teachers and administrators took a turn in the dunk tank while students snacked on snow cones, got haircuts, climbed the new playground and reunited with their community after a long summer and many months separated.

"After the year we had, to have such a beautiful building to come home to is beyond what we could have imagined," first grade teacher and Sumas Elementary alum Abbie Ball said. 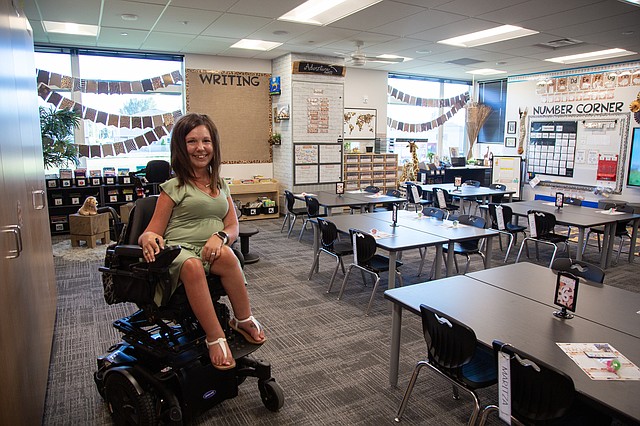 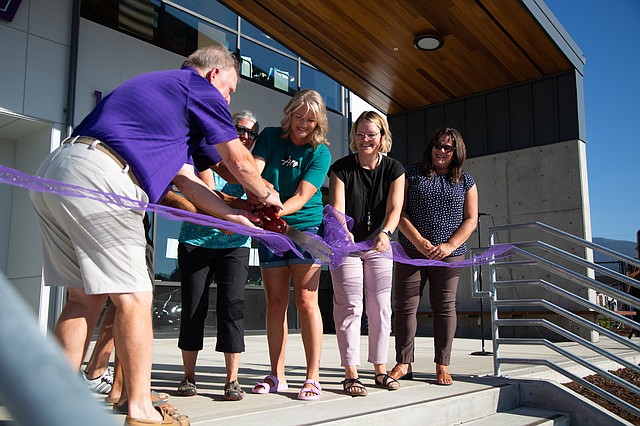 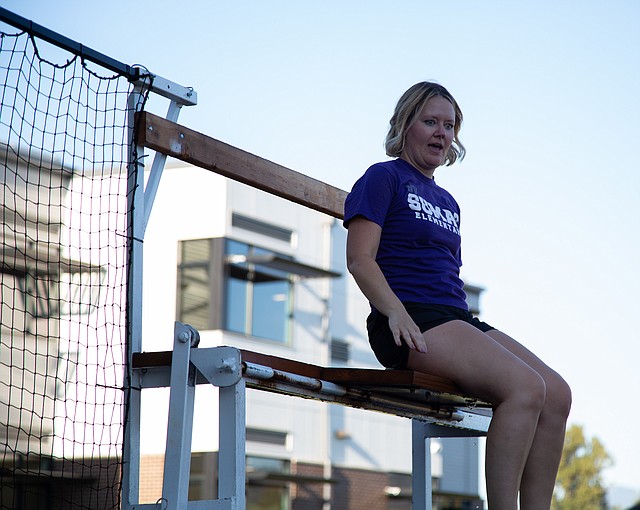 Principal Sarah Condreay watches in terror as students try to hit a small target on the dunk tank to drop her into the water. (Hailey Hoffman/Cascadia Daily News)

Last November, flooding ravaged much of Sumas, Everson and surrounding areas, including the old Sumas Elementary.

Former principal Megan Vigre — who now serves as the director of curriculum, instruction and assessment for the Nooksack Valley School District — was among the first to return to the old Sumas school building on Nov. 17, 2021, when the rains had stopped. Vigre had sealed the exterior doors shut to prevent water from getting in, but when she opened the doors, she was met by a torrent of water gushing out.

As she waded through the thigh-high water, she was shocked to see a decimated library and thousands of waterlogged books and equipment floating around classrooms and in hallways. The school – the community's hub for young people and learning – was destroyed.

"We were told when we were cleaning out our classrooms that anything that's touched the water basically needs to go. It's contaminated," said current Sumas Principal Sarah Condreay, previously a fifth grade teacher. 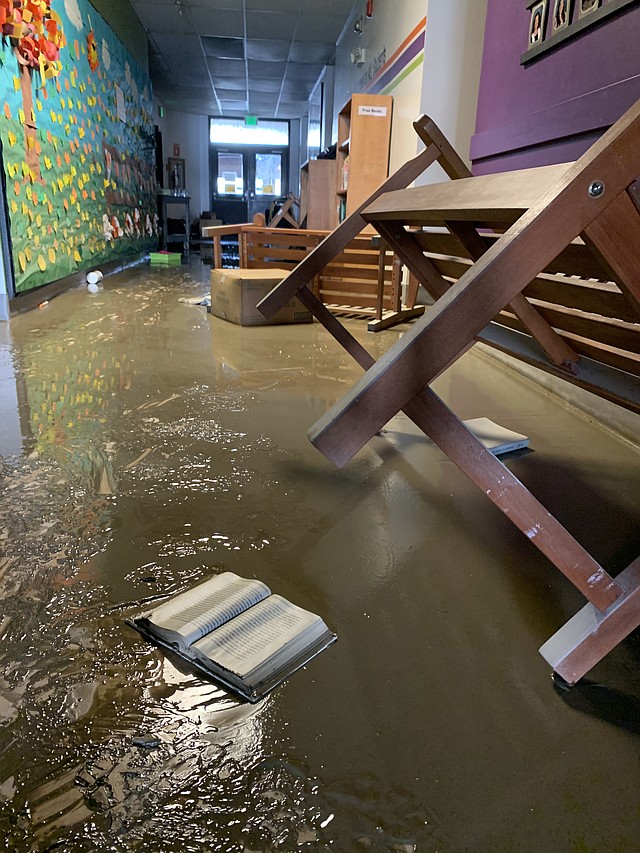 However, there was a silver lining amid the devastation. The 2021-2022 school year was the last Sumas would house its youngest students in the 50-year-old building. In fall 2022, floods or no floods, the students were slated to begin at the new school building.

In February 2019, the school district passed a $29.7 million bond to construct a new building for Sumas Elementary, the Lynden Tribune reported. Zervas architectural firm designed the building, and Lynden-based company Faber Construction broke ground on the 51,412-square-foot project in September 2020.

Over a year later when the flood waters hit, the structure stood six feet off the ground with a crawl space, preserving the new school building from the wrath of the flooding. Peak floodwaters hit just six inches away from damaging the space.

“The crawl space has been designed to allow water to flow through, mitigating ‘flood shadowing’ that could affect adjacent properties," said Connor Smith, Faber Construction superintendent, in a press release. "Also, we installed flood gates to protect doors and used waterproof paint to keep water from seeping through walls.”

The school also has high-efficiency mechanical and plumbing fixtures, insulation and windows. Safety features include cameras and a one-button lockdown system.

On Wednesday, the roughly 300 students will begin a new year spread across 24 classrooms in one school building.

Sisters Nora, 10, and Fiona Daily, 9, said they are excited to see their friends and to attend the same elementary school again.

"It feels good to be back to somewhat normalcy," parent Jon Gunderson said.

Due to recent additions of classrooms to the elementary schools from the same bond, they had just enough space to fit the displaced students. The schools' four bus drivers had to pick students up and drive them to three different locations and back every day.

"Everybody, regardless of the position, bent over backward to make sure that kids [were] going to be where they needed to be," Condreay said. 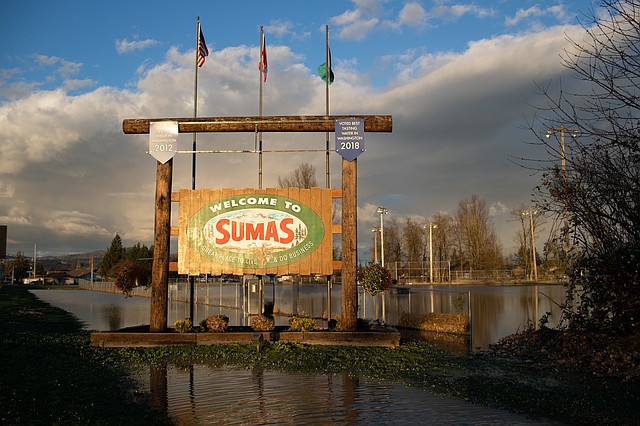 Beyond the displacement, students, teachers, staff and families had to deal with the trauma of surviving a natural disaster.

"There was a lot of trauma and fear of the rain, which in this area is a horrible thing to be afraid of," Condreay said. 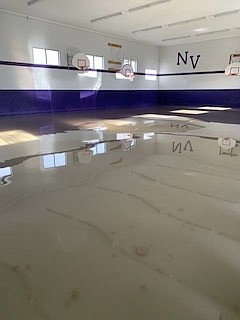 Counselors and specialists from schools around the county came to provide the students and staff with group and one-on-one counseling, Vigre said. County school districts have the Whatcom County Mobile Response Team (MRT), which sends counselors to a school that has experienced a traumatic event beyond the capacity of the district's resources. The ultimate aim is to "help school communities return to normal functioning after a critical incident," according to documents provided by Lynden School District superintendent and MRT coordinator David VanderYacht.

In addition to the immediate response, teachers and staff focused on routines, relationships and resiliency — already a game plan in the wake of the COVID-19 pandemic — to help students, and themselves, recover. Condreay said the trials nurtured intense bonds between the students in her classroom and in others.

In the weeks following the flooding, Condreay said each day a few more students would filter back in, quiet, sad and nervous, and each time the whole class would cheer for their return. 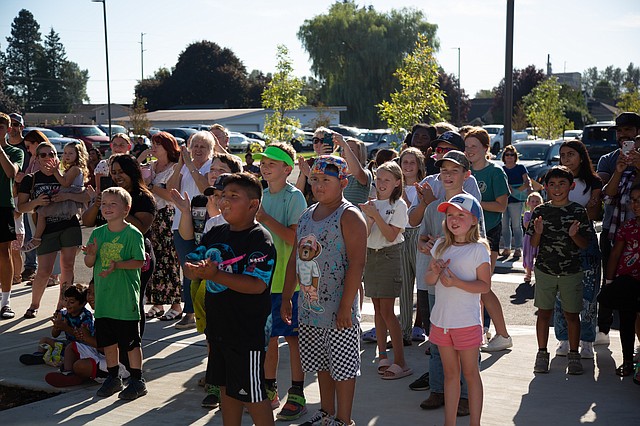 At the end of the year in June, Sumas Elementary held its annual "moving on" ceremony for the fifth graders at the new building, after the old building had been demolished. Students gathered together for the first time since the school was flooded.

The school sought to make the day extra special. Bus driver Kurt Devries recruited the Whatcom County Fire Department to spray its hoses in an arc over the road on the students' bus ride, and the entire school created a giant tunnel for the fifth graders to run through. The fifth graders also presented 1,000 paper cranes they'd made in the weeks prior as an art installment at the school, leaving a mark on the new building they wouldn't fully experience. 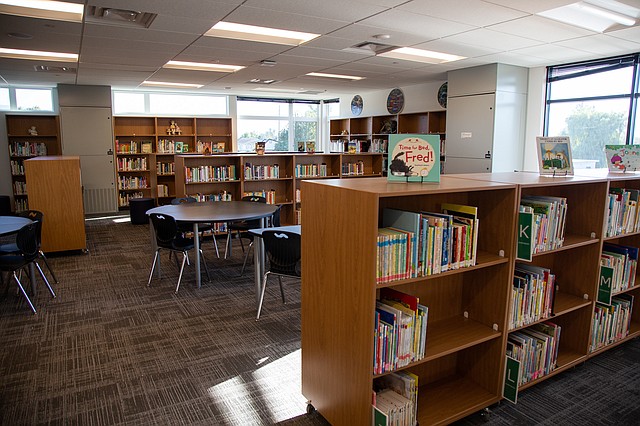 Books fill the new library on the second floor of Sumas Elementary. Librarian Kathy Bronkema restocked the library with the help of a $2,500 donation from Bernice Vossbeck Elementary in Lynden. (Hailey Hoffman/Cascadia Daily News)

Going into this year, the school district received a $3,000 donation from the Bellingham Symphony Orchestra to rebuild its music program. The school's library received a $2,500 donation raised in Scholastic Book Fair funds from librarian Jen Frombly and Bernice Vossbeck Elementary in Lynden, as seen on the Today Show. The Mount Baker Rotary Club donated a new early-learning playground. Checks came in from various people and organizations in the community, and people from across the country filled every wish on teachers' Amazon lists.

"Our community wrapped their arms around us and helped us start the new year with everything we need," Vigre said at the welcome back event. 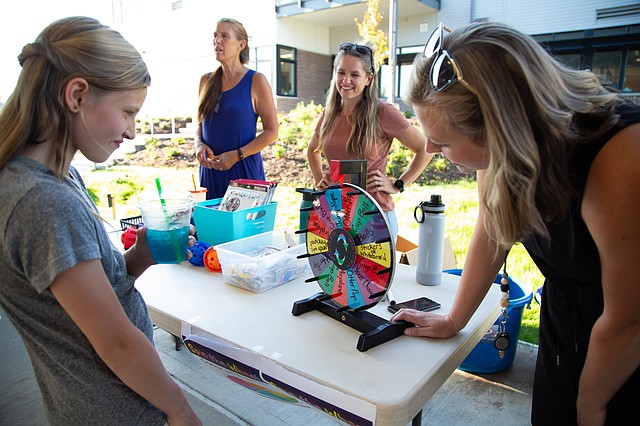 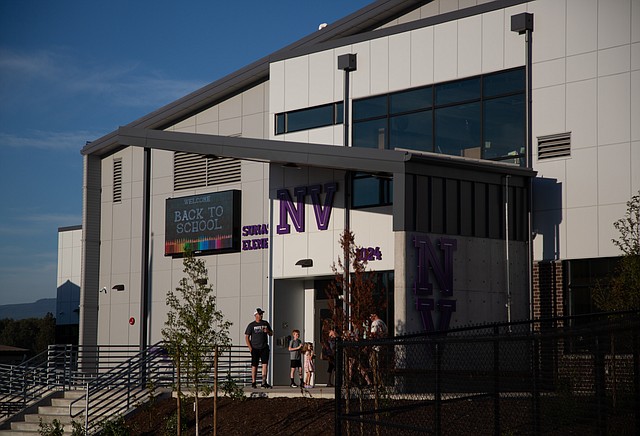 Evening light illuminates the new Sumas Elementary School, a source of hope and a hub of community for many in Sumas. (Hailey Hoffman/Cascadia Daily News)

This story was updated to include information on the construction and architectural firms and the specifications of the building on Aug. 30 at 1:45 p.m.