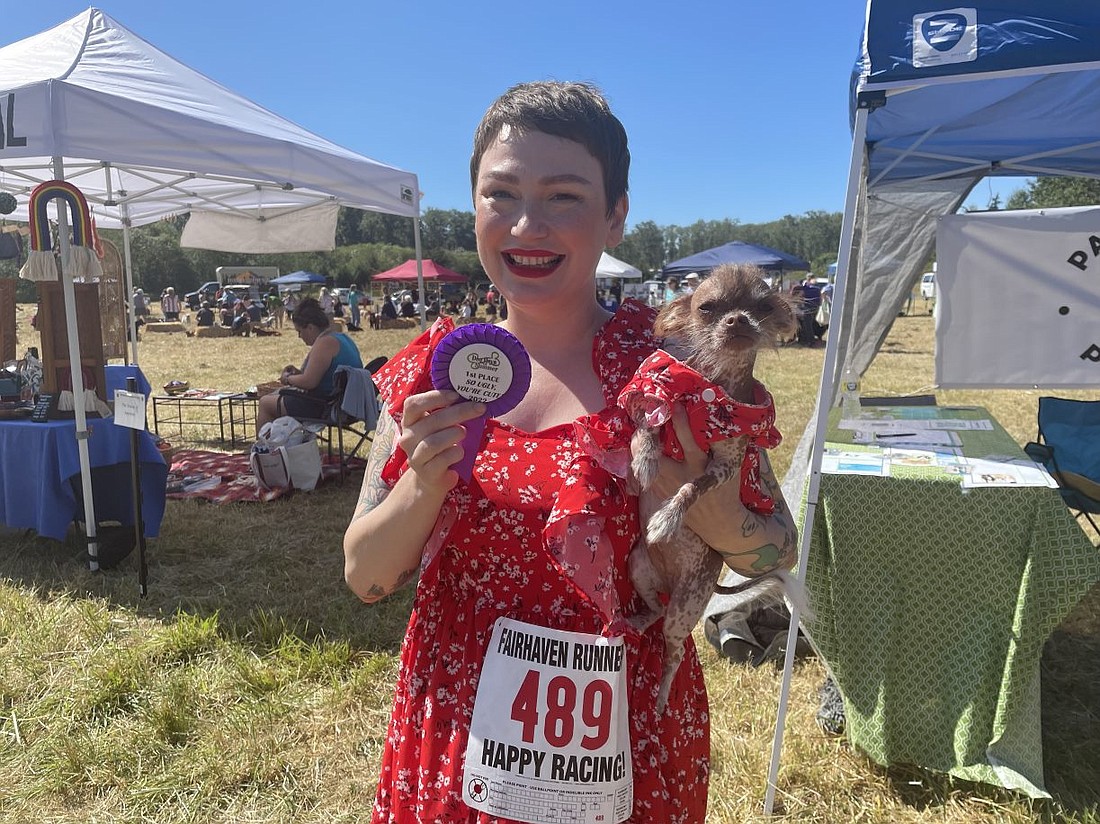 The festival has been running for around 20 years now, and serves as a community event and a fundraiser for the organization.

This year’s festival was a little extra special. An anonymous donor decided to match this year's donations dollar for dollar up to $10,000, bringing the total money raised to just over $20,000, said Laura Clark, Whatcom Humane Society’s executive director.

“We did meet that match,” Clark said. “The proceeds will directly benefit all of our operations.”

Maya, a 2-year-old bernedoodle, competes in the “What did my dog eat?” contest, where dogs sampled dried fruit, cheese, veggies and dog treats. Maya was eliminated on the carrot round. (Julia Lerner/Cascadia Daily News)

In the field behind the humane society’s shelter on Division Street were around 35 booths providing entertainment and information.

As an animal caricaturist was busy animating pups in exchange for donations, several dogs were making their own art using their paint-covered paw prints.

Several festival-goers registered their dogs for contests, giving them an opportunity to shine. Contests included best ears, best bark and even a “So ugly you’re cute” competition.

To help the dogs cool off on a hot day, there were several kiddie pools set up. Kona Ice, a mobile shave ice truck, was selling $3 pup cups, with chicken broth topping instead of sweet syrup.

The festival also included a few shops, one being a pop-up version of the Whatcom Humane Society’s thrift shop, but focused on selling new and gently-used pet goods.

“It's great to get socialization in and learn about so many local services,” said Shantel Stromerson, who took her dog, Callie, to the festival for the second year in a row. “We love meeting fellow dog-loving people.”

Clark said she felt the event went wonderfully, adding that the day of community fun was a perfect way to end the summer. She said she loves being able to see families and their dogs grow over the years.

“To see the dogs start as puppies and come every single year and compete in the silly games and contests, it’s just so much fun,” Clark said.