Analog Brass: From parties and protests to center stage 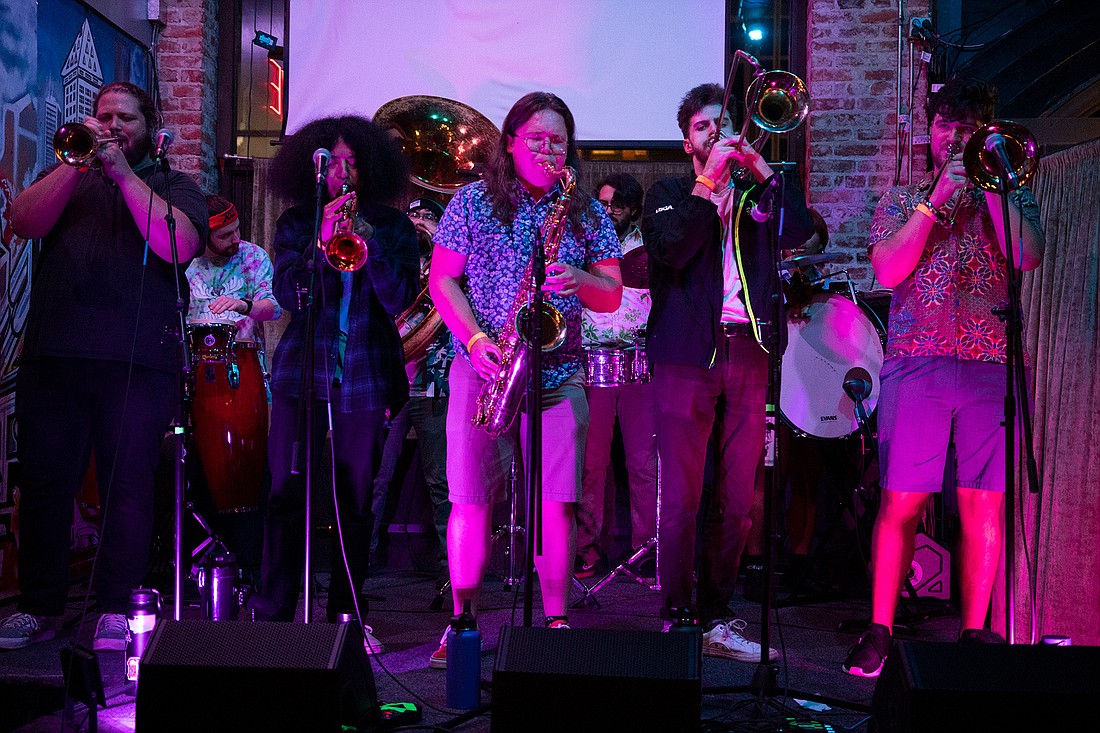 Hear modern sounds along with traditional New Orleans brass band music when Analog Brass performs at the Kulshan Trackside stage Thursday, Aug. 18, and at the Stones Throw Block Party Saturday, Aug. 20. The ensemble has been playing shows, house parties and at protests since 2017. (Photo courtesy of Chris Butcher)

Founded in 2017, Analog Brass has been bringing its blend of modern sounds and traditional New Orleans brass band music to shows and parties all over the area for the last five years.

You might have seen them at Downtown Sounds last summer, or popping up at a house party or a parade. Led by Maxwell Lemke, who also plays trombone and sousaphone, the band is made up of seven horns and two drummers. As one might expect with a band that size, they also have a rotating cast of subs who can fill in when one member can’t make it to a gig.

Although brass band music is the foundation of what Analog Brass plays, the ensemble incorporates all sorts of influences into its sound, occasionally referring to themselves as a “pop-funk” band that plays brass instruments. They mention the Hot 8 Brass Band, the Soul Rebels, the Big 6 Brass Band and Rebirth Brass Band as some of their biggest influences.

As the title of its 2021 album “Songs From The Protest Route” would suggest, Analog Brass loves to play at protests and political events. They are currently working on a new album, tentatively entitled “Homebrew,” which will include a mix of instrumentals and collaborations with some of the best rappers on the local hip-hop scene. Members write most of their own music but don’t shy away from the occasional cover (check the version of “Old Town Road” to see what I mean).

Analog Brass has two big shows this week, at the Kulshan Trackside stage on Thursday, Aug. 18, and then headlining the Stones Throw Block Party on Saturday, Aug. 20. If you want to experience a bit of New Orleans right here in Bellingham, put on your dancing shoes and head on over.

In other big block party news, FrinGe Brewing is hosting one up in Ferndale with all sorts of live music. They’ll be taking over a block of Third Avenue from noon to 8 p.m. on Saturday, setting up a stage and bringing in a bunch of food trucks and other fun.

With the Sylvia Center for the Arts closing next month, the Jazz Center needed a new home for its concert series. I was glad to hear it will be moving to the FireHouse Arts and Events Center in Fairhaven, which should be a great spot for it. The Jazz Center also announced its schedule through January and will be having an open house on Wednesday, Sept. 7 to celebrate.

Finally, fans of unpredictable folk music should make sure to check out "Where I Wanna Be," the debut recording from local duo Marie, The Band. The seven-song EP is full of surprises, harmonies, humor and fiddles.