A long goodbye: Glenn Hergenhahn-Zhao is leaving the Sylvia Center 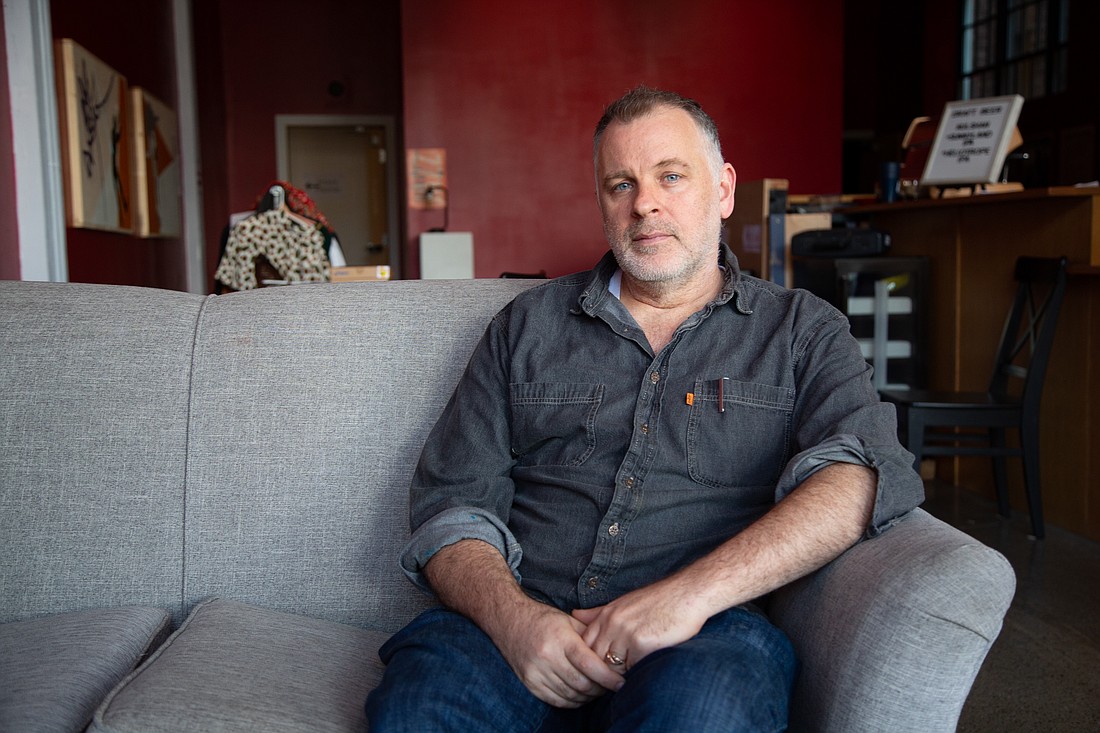 Glenn Hergenhahn-Zhao, the founder of iDiOM Theater, is stepping down from his position as the Artistic Director for the Sylvia Center for the Arts in May. (Hailey Hoffman/Cascadia Daily News)
By AMY KEPFERLE
Staff Reporter

Audience members who were in attendance last Friday for opening night of iDiOM Theater's “The Wonders of the Swirling Night” at the Sylvia Center for the Arts were also privy to an emotional introduction by Glenn Hergenhahn-Zhao, who wrote and directed the seven short plays we'd come to see.

For those who hadn't yet heard the news, it may have come as a shock to find out that after performances of his play “Hamleto” and “The Blank to End All Blanks” in May, Hergenhahn-Zhao, 52, will step away from his position as Artistic Director of the Sylvia Center.

“I've been the director of this theater and organization for most of the last 20 years,” he said, “and I am down to my last 10 performances here. So this is the start of a long goodbye.”

Hergenhahn-Zhao then evoked the names of people who are gone now but were important in bringing first the iDiOM Theater and then the Sylvia Center to life — Sylvia Scholtz, for whom the community arts center in downtown Bellingham is named; beloved local musician Lucas Hicks, whose moniker graces the theater we were sitting in; and Brian Patterson, an actor and “awesome human being" whose visage can currently be seen on the posters for “The Wonders of the Swirling Night."

“Brian Patterson is with us in spirit,” Hergenhahn-Zhao said. “Our plays tonight are for him, and for you.”

What followed were more than 90 minutes of theater that made me guffaw, tear up and ponder life's many mysteries. In “The No More Pilfered Moments Club” a lonely guy reluctantly (but bravely) makes a new friend. “Dark Matter” sees an unsuspecting customer in a restaurant being regaled with song and dance focused on quantum mechanics. Next, “Chandeliering” brings ghosts into the equation.

A tough breakup with an imaginary friend is the topic of “Allen, It's Time We Talked,” and “The Librettist, The Memoirist, and The Hypnomagician” sees three fellas with oversized egos make their marks. “Love is a Baby Horse on Fire” defies description — but trust me, it's hilarious — and the amazing “South of Norway” re-creates Shakespeare's “Hamlet” via rap and audience participation. 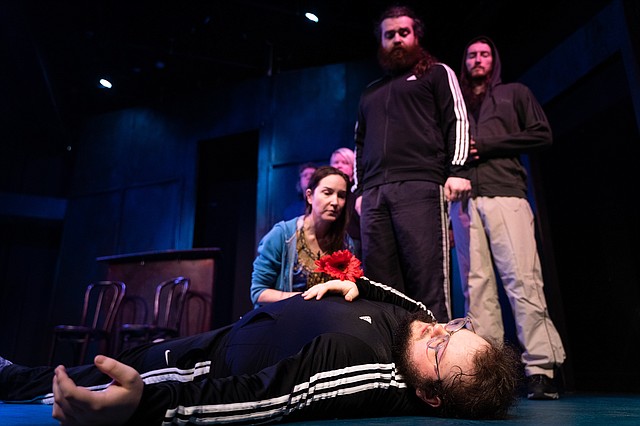 As part of "The Wonders of the Swirling Night," the short play "South of Norway" tells the story of "Hamlet" via rap lyrics and audience participation. Matthew Balam (on the ground) plays the doomed Hamlet. (Photo courtesy of Alexander Bodi Hallett/Sattva Photo)

The final play on the docket, “Epicurus and the Appleknockers,” features a bellicose coach played by Hergenhahn-Zhao. It's halftime of a football game his team is losing, and he's apoplectically angry. The masterful one-man performance ends with a pandemic-related confession that may provide clues into his real-life departure.

“There are some themes in there that feel like the right plays to be doing as part of a long farewell,” Hergenhahn-Zhao told me the day before the collection of shorts opened. “Putting up shows is what I've been doing for a long time, and that part of the work — even when it's stressful — is where my heart is.”

That said, Hergenhahn-Zhao acknowledges he's been overworked and understaffed for a long time, and that continuing to put in 80-hour workweeks isn't something that's feasible for him in the long run. Being shut down during COVID-19 gave him perspective as to how unhealthy that pattern was, he said, and when restrictions began to lift he was determined not to get sucked back into the fray.

That didn't quite work. As early as last August, Hergenhahn-Zhao talked to the Sylvia Center board about making an exit, but it wasn't until November that the news was made public.

“It was basically not a tenable working environment, and I couldn't change it,” he said. “It wasn't my plan to step down. I've been doing theater in this town for 25 years, even before iDiOM existed, and I'm not leaving. I'll still be doing stuff when the dust settles.”

One of the projects Hergenhahn-Zhao will be working on is related to the anthology of plays currently showing. The 500 Plays Project — drawn from the staggering amount of short and full-length plays the prolific playwright has penned over the last two decades — will see him beginning to publish the works. iDiOM Theater will likely remain under his purview, but he's not sure what form it's going to take at this point.

Before he exits stage left, Hergenhahn-Zhao has a few more tricks up his sleeve. In addition to presenting a second weekend of don't-miss performances of “The Wonders of the Swirling Night,” “Hamleto” will be staged May 5-14 for the first time since 2007, when it had its debut as “Hamlet: The Melancholy Prince of iDiOM Theater.” Although it's billed as a comedy, it does have certain resemblances to the Bard's tragedy in that it's about a boy who happens to be named Hamlet, who has a father who dies and an uncle who takes up with his recently-widowed mother. 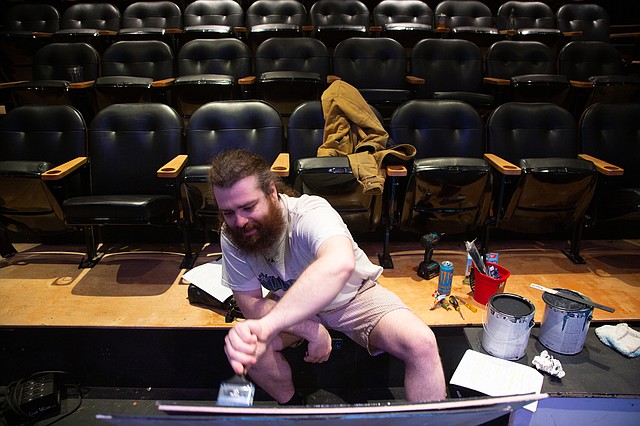 Tyler Detrick paints a set piece at the Sylvia Center in advance of opening night for "The Wonders of the Swirling Night." Detrick is also part of the cast. (Hailey Hoffman/Cascadia Daily News)

Finally, “The Blank to End All Blanks” will bring Hergenhahn-Zhao's long tenure to a close May 20 and 21. The playwright invitational will gather together iDiOM alums from near and far, including former artistic director Solomon Olmstead, Krissa Woiwod, Tyler Detrick, Joan Harris, Raven Burnett and, of course, Hergenhahn-Zhao. Actors will include Olmstead, Jesse Reynolds, Kimberly Ross, Chris Coombs, Andrew Herndon, Jeff Braswell, Gillian Myers, and more. With only two nights of shows slated, you'll want to procure tickets soon to secure a seat for what is sure to be a memorable event.

With the end so clearly in sight, I asked Hergenhahn-Zhao if he thinks he'd still be stepping away from the Sylvia Center if the pandemic hadn't caused him to rethink his life's trajectory. He paused before answering.

“It's hard to know,” he said. “I had intended to be doing this for the next 10 years, 20 years. However long I had it in me. So probably not. But I don't think it is a completely negative thing. We've just been at a mad sprint forever.”

“The Wonders of the Swirling Night” shows at 7:30 p.m. Friday and Saturday, April 8 and 9, at the Sylvia Center for the Arts, 207 Prospect St. Tickets are $5 to $15. Info: sylviacenterforthearts.org