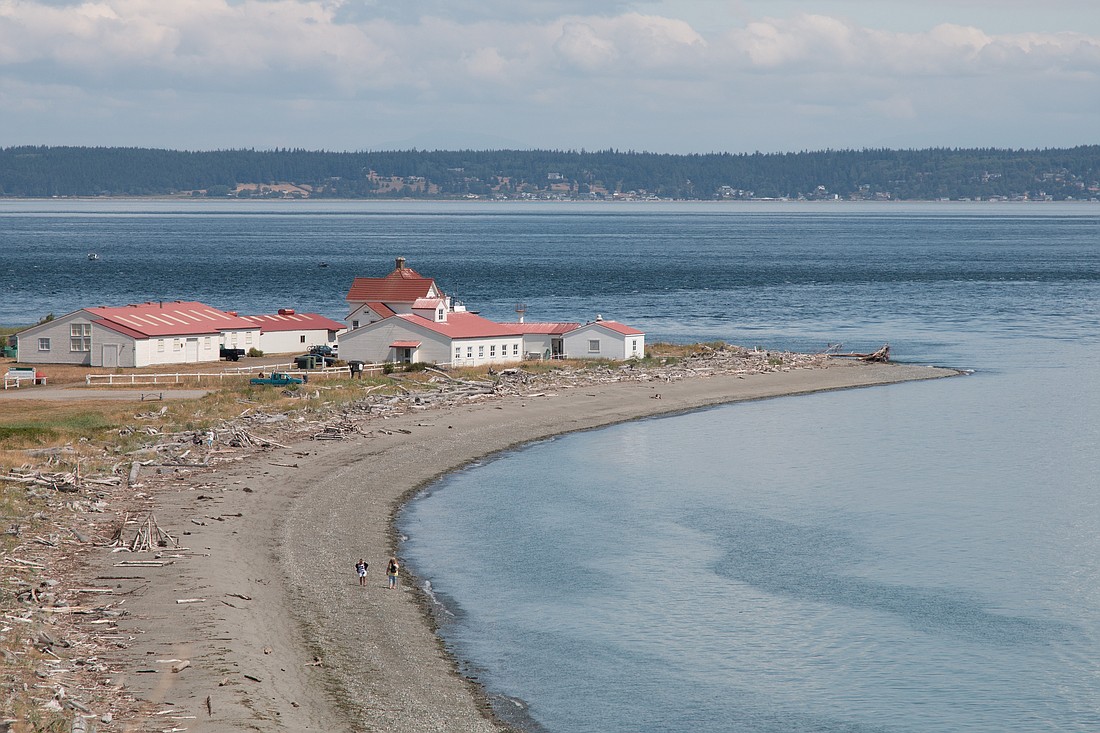 Hikers stroll the beach at Fort Flagler State Park on Marrowstone Island, one of the many Puget Sound state parks where clandestine military training is allowed by the state Parks and Recreation Commission. A court ruling last week overturned the state's permission for the training. (Ron Judd/Cascadia Daily News)

It’s not the normal language expected from behind the bench in a courtroom. But there it was last week, spoken on camera by a Thurston County Superior Court judge.

The seemingly loaded phrase came in a ruling against Washington State Parks, traditionally providers of respite from the cacophony of an increasingly noisy, complicated world, and indirectly, the U.S. Navy, which has enjoyed a long, often mutually beneficial relationship with western Washington government and citizenry that seems to be fraying amid what many see as boorish behavior by the military.

Backgrounder: The U.S. Navy for years has quietly had State Parks’ permission to conduct clandestine training operations, such as shoreline incursions by SEAL units, in a handful of waterfront state parks, whose beaches offer what the Navy insists are unique characteristics necessary to practice stealthy warcraft. Among these: some of the most popular in the system, including the oft-visited Fort Flagler and Deception Pass.

The state Parks and Recreation Commission, in a controversial 4-3 vote in January 2021, re-upped the agreement, with modifications, for Navy use of up to 17 parks, in the face of spirited public opposition.

Commissioners voting to continue the pact emphasized the quiet nature of the training in purely practical terms — hours and numbers — and spoke of duty and obligation inherent in supporting local military operations. Those opposed warned of straying beyond State Parks’ core mission of recreation and solace, perhaps opening the doors to precedents that might prove regrettable.

Practical upshot: Most of us will never see these ops, which to the Navy and some commission members, was the reason to let it continue. The old “no-harm, no-foul” argument.

But the very unseen nature of the exercises was indeed the point, one arguing not for but against the training, suggested a suit by Whidbey Environmental Action Network (WEAN) of Langley. The lawsuit, a largely unnoticed longshot, sought to prove that the stealthy nature of the Navy’s special ops on public lands was not incidental to the problem – it was the problem.

Testimony before a Thurston County Superior Court judge focused on the likely psychological impact of recreationalists by mixing traditionally peaceful places with surreptitious SEAL activity — or at least knowing it was possible.

To the shock of most and celebration of WEAN, Judge James Dixon agreed, calling the state's refusal to complete a full environmental study of re-upping of the pact arbitrary, capricious and shortsighted. He agreed with the litigants in pointing to what might be considered a unique legal argument: The creep factor.

“This court has spent some time trying to articulate another definition or phrase that might adequately describe the emotional impact of people who utilize our state parks, something other than 'creep factor,' because it’s a long way from a legal term,” Dixon acknowledged in a bench ruling, captured on video.

“But I can’t find one. It’s creepy. And the argument that, ‘Look, Judge, no-harm, no-foul,'” in this court’s analysis, falls on deaf ears. The fact is that the public has been advised that the military will be using state park lands to conduct military training. That fact, and that fact alone, creates a significant environmental impact.” 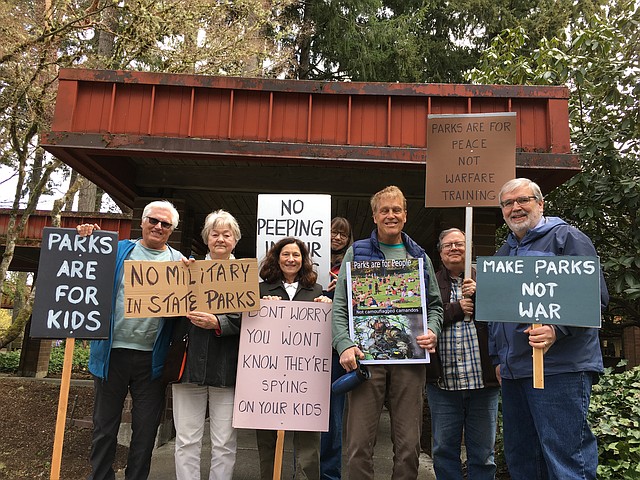 Members of the Whidbey Environmental Action Network, a Langely-based preservation group, flocked to a recent Thurston County Superior Court hearing on their lawsuit over the use of Washington State Parks for covert training by Navy special-operations units. A judge struck down a 2021 state decision to allow the practice. (Photo courtesy of Whidbey Environmental Action Network)

The judge didn’t stop there. Hinting he was straying onto perilous turf, he put the training exercises in present-day political context. Dixon referenced the unsettling storming of the U.S. Capitol on Jan. 6, 2021 (he didn't mention that it was by people in military gear, but didn't need to), and the ongoing invasion of Ukraine by Russian forces.

“What might be the impression of a parkgoer when a parkgoer sees somebody in military garb on state park lands?” he asked. “It boggles the mind, at least my mind.”

Key to his decision, says WEAN’s Marianne Edain, was an agreement with petitioners — a coalition of environmental and peace groups that includes many veterans, that the primary need for the Navy to train on public lands, rather than the roughly 50 miles of non-park shoreline it already owns, is the presence of “an unsuspecting public.”

A state agency acquiescing to that creep factor was untenable, and representative of a society in which militarism has been elevated to an unseemly place as a driver of public policy, Edain and other litigants believe.

In spite of much present evidence to the contrary, “This is not a warrior society,” or at least needn’t be, she said. The state’s partnership with the Navy pushed the line that much farther in the minds of the citizen’s group, and likely many supporters.

All of this can and will be viewed, of course, as an overtly political expression by a judge — one that might be overturned on appeal if the state decides to greenlight its lawyers. But that’s an action that cooler heads in Olympia might think twice about.

Does a state agency that has enough problems providing picnic tables and RV sewer dumps really want to spend public money fighting in court for the right to keep state parks open to what a judge has acknowledged is a creeping Creep Factor? We shall see.

Beyond its immediate impact, it shines a spotlight on Puget Sound’s relationship with the military in general, long an acknowledged partnership that now shows signs of frequent, and visible, chafing. Our federal representatives have long straddled this Third Rail of Northwest politics: A Cold War military presence — and all the jobs and benefits that come with same — in a region increasingly crowded, urbanized and politically fluid.

The Navy has been its own worst enemy here in the past decade: Refusing initial studies about the serious impacts of increased, earth-shattering noise of EA-18G Growler on Whidbey. Bullishly claiming the sacred, quiet lands of Olympic National Park, a World Heritage Site, as a fighter-jet and electronic-warfare playground. Dragging its feet on environmental damage, including groundwater poisoning, on its own lands in increasingly populated areas such as Whidbey Island. Lawsuits abound, but have lessons been learned?

Western Washington is not the sleepy hollow it was in the 1950s, or even the early 2000s. It’s a growing, mostly progressive, modern hub of nearly 7 million people. What once was normal and accepted takes on new meaning in that new place. Politicians ignore this at their own peril.

Don't get too worked up. The court case over state parks, in the grand scheme, is a blip, likely to have little lasting consequence in practical terms. But its impact could live on in broader future political discussion.

For that, credit, or blame, depending on one’s persuasion, goes to a judge whose uncommon candor and plain-spoken reasoning for overturning a state action based on a concept difficult to quantify but to most, clearly understood: