From hardcore to psychobilly, trio’s music is fast and loud 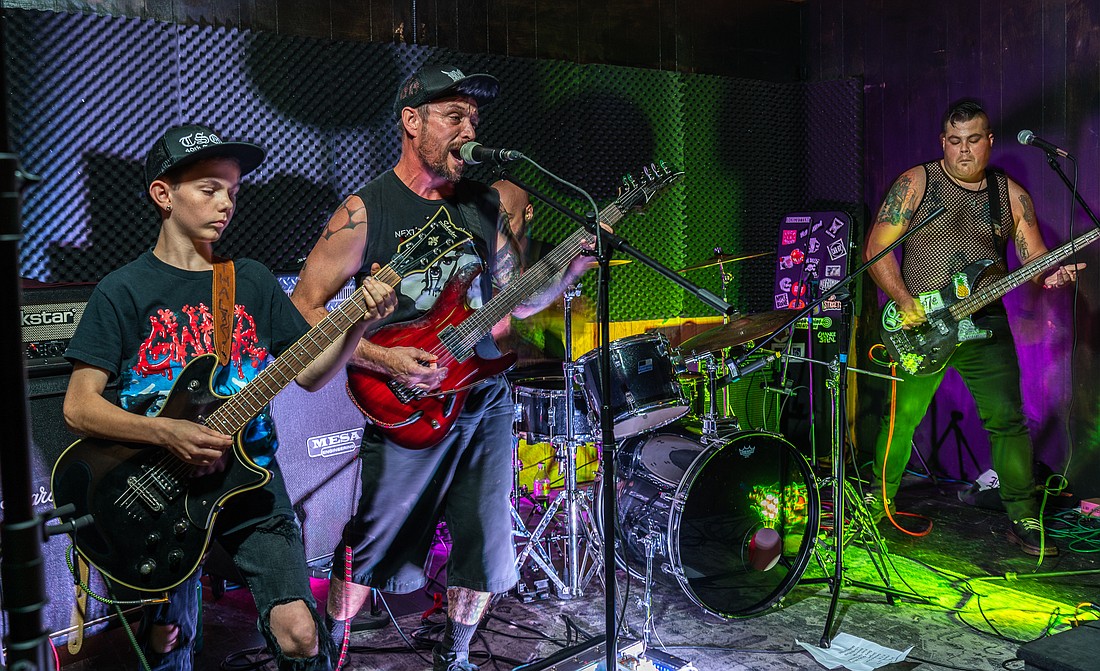 Proud Failures are joined onstage by guitarist and vocalist Kent Leath's son Zach. The punk band is celebrating its 10th anniversary this year, and it has some big plans. The trio's next gig is Friday, Jan. 27 at The Shakedown. (Photo courtesy of Matt Hodel)

In any given music scene, certain artists seem to form connections with all the others. In the Bellingham punk scene, Proud Failures seem to play that role. All three members are or have been in lots of other bands. They are always organizing shows, promoting shows that aren’t even their own, organizing benefits, and finding ways to bring new people to the stage and into the scene.

As a band, they are celebrating their 10th anniversary this year, and they’ve got some big plans. Despite some revolving lineups, they put out full-length albums in 2015 and 2019, and the “Hands Up” EP in 2021. The current lineup is Kent Leath on guitar and vocals, Ron Raymundo on bass and vocals, and drummer Davy Seizure. Their music is fast, loud and obnoxious in all the best ways, drawing on sub-genres from hardcore to psychobilly. Each song is a new blast of adrenaline, with few of them running much over two minutes.

Most recently, they dropped a new live EP, “As Long As Yer Havin Fun,” and they’re also heading back into the studio in March to work on a new full-length album. After that, they’re heading out for a midwest tour in the summer with their friends in Potbelly, from Whidbey Island. When asked about some of the highlights of their time together, the band mentioned some of the great groups they’ve had the chance to open for such as Nekromantix, Agent Orange and the Delta Bombers.

Beyond that, though, the highlights that come to mind for them are things like getting their friends onstage to sing with them. Offstage, they try to hang out as much as possible, anything from going fishing to making absurd promotional videos. Seizure also recently started the Bellingham Punk and Metal Scene Facebook group, which has rapidly turned into a vital online hub for that community. If you want to experience this sort of musical camaraderie for yourself, they’ve got a show this Friday at the Shakedown, so head on down and check it out!

This Saturday at Anacortes High School’s Brodniak Hall, there’s a neat event happening, with six student bands coming together for a Battle of the Bands. The bands are My Bad, Enslave The Mollusk, Floodlights and Fools, Fully Funktioning, 67 Seconds to Breathe, and Metanoia, and tickets are only $5.

The open mic at the Underground Coffeehouse is back in action. That will be happening every Tuesday night from 7–9 p.m., with signups starting at 6:30 p.m.

In new release news, Robert Sarazin Blake’s new live album is out now. Titled “One Summer Night,” it was recorded live at the 2018 Subdued Stringband Jamboree, and features the local troubadour backed by a magisterial four-piece electric band.