Rain, traffic and hundreds of other visitors to the iconic Oregon landmark 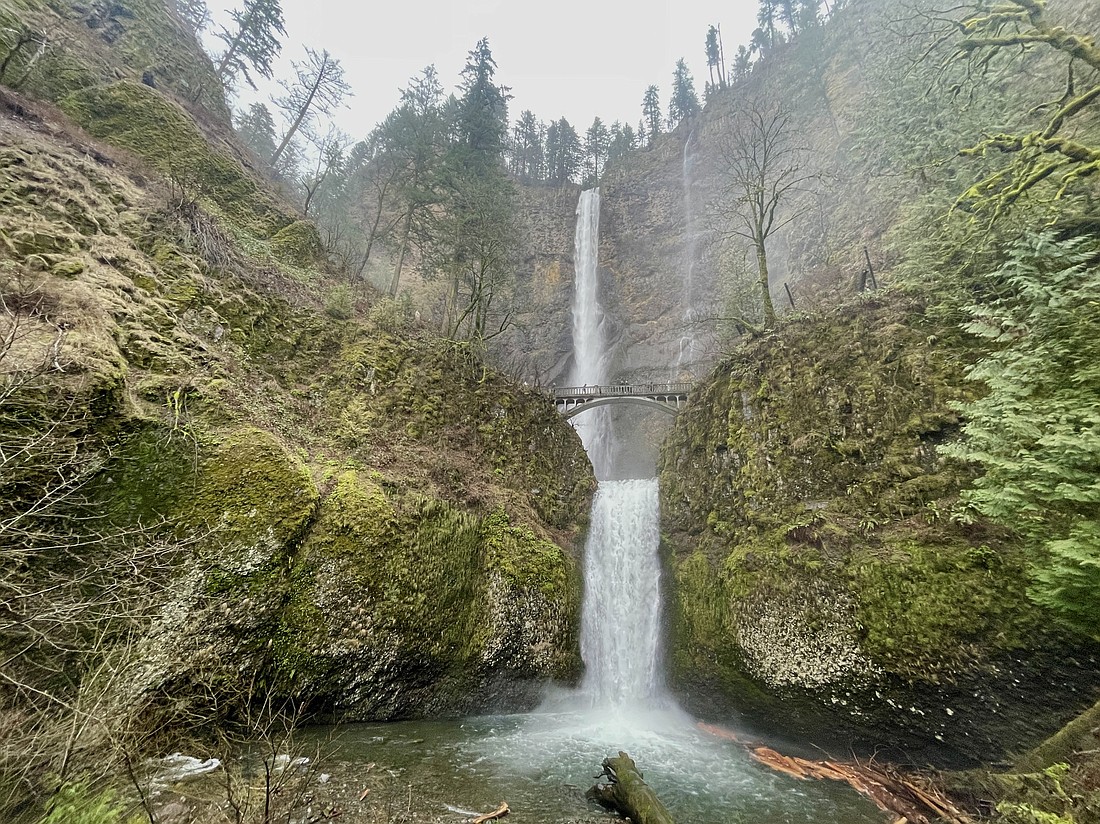 MULTNOMAH FALLS, Oregon – My day started 33 minutes late, at 6:33 a.m. on Saturday. With big plans to make it to Oregon to visit the legendary Multnomah Falls in the Columbia River Gorge during daylight hours, I had to start my weekend a little earlier than usual.

My co-pilot for the trip, a 2-year-old bernedoodle named Maya, was ready to go before me (typical), but after a hot cup of coffee and a quick pit stop for her to use the restroom, we were on the road before 7 a.m. 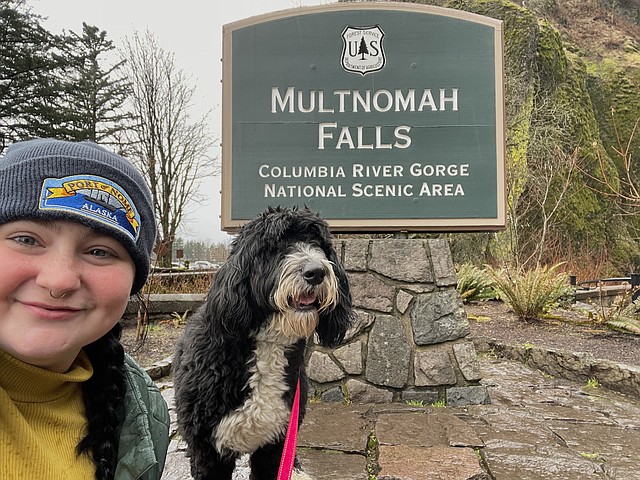 Julia Lerner and her 2-year-old bernedoodle, Maya, made the 4.5-hour trek to Oregon on Saturday to hike Multnomah Falls, the most visited natural recreation site in the Pacific Northwest, according to the National Park Service. (Julia Lerner/Cascadia Daily News)

The decision to visit Multnomah Falls this past weekend was on a whim: I wanted to go somewhere new, Maya just wanted to get out of the house, and, sort of like kismet, my mom emailed me a screenshot of a Facebook post from a page titled “Best Secret Getaways” showing the 600-foot waterfall covered in snow.

The falls, of course, is not any sort of “secret getaway.” With more than 2 million visitors per year, Multnomah Falls is the most visited natural recreation site in the Pacific Northwest, according to the U.S. Forest Service. For comparison, the National Park Service estimates about 2.7 million people visited Olympic National Park — the entire park — in 2021.

Tahoma (Mount Rainier) was in the rearview window by 8:30 as we cruised past Seattle and Tacoma en route to our destination. Though we were making good time, the four-legged passenger required another stop, so we pulled off the road near Vancouver, Washington, to stretch our legs and get a cup of something called a “Double Rainbro Rebel” at Dutch Bros.

We crossed into Oregon at 10:52 a.m., just four hours after we left home. We made quick stops at the most touristy destinations in Portland — Powell’s City of Books and Voodoo Doughnut — and picked up donuts for the Cascadia Daily staff and a couple of books I’ve been eyeing. 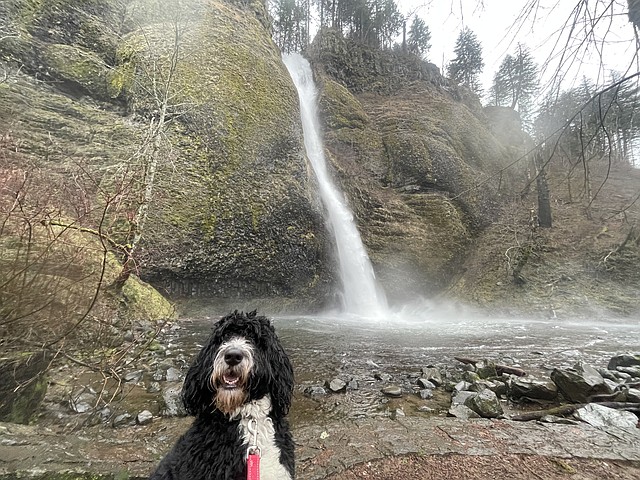 On a good day, the falls are just a half-hour drive outside the city. On a bad day, when it’s dumping buckets of rain and your four-legged passenger can’t decide if she wants to sit in the front seat or the back seat so she keeps smacking you in the face with her tail as she moves around, it’s closer to 45 minutes, not including time to find parking in the incredibly crowded Multnomah Falls parking area.

The place was packed. I should have expected this: a Saturday afternoon on a holiday weekend brought people out in droves, despite the terrible weather. Maya and I had to weave through throngs of people, including high school tour groups, other out-of-town hikers and their dogs and a tipsy bride-to-be (in VERY high heels, despite the mud) with her entourage during a bachelorette party, to get to the trailhead.

The view of the falls from ground level is breathtaking, but the higher you get, the better it gets. We crossed the famously photographed stone bridge, while a deluge of spray from the falls made me wish for another sweater under my raincoat. Maya didn’t seem to mind as she pulled me further up the trail.

There’s another .8 miles from the bridge to the top of Multnomah Falls —  almost all steep, precarious switchbacks. Fighting rain, mud, falling rocks and dwindling daylight, my four-legged friend and I did not make it to the very top but opted to take other paths. We strolled along the Gorge Trail over to Horsetail Falls, seeing few others take the road less traveled. 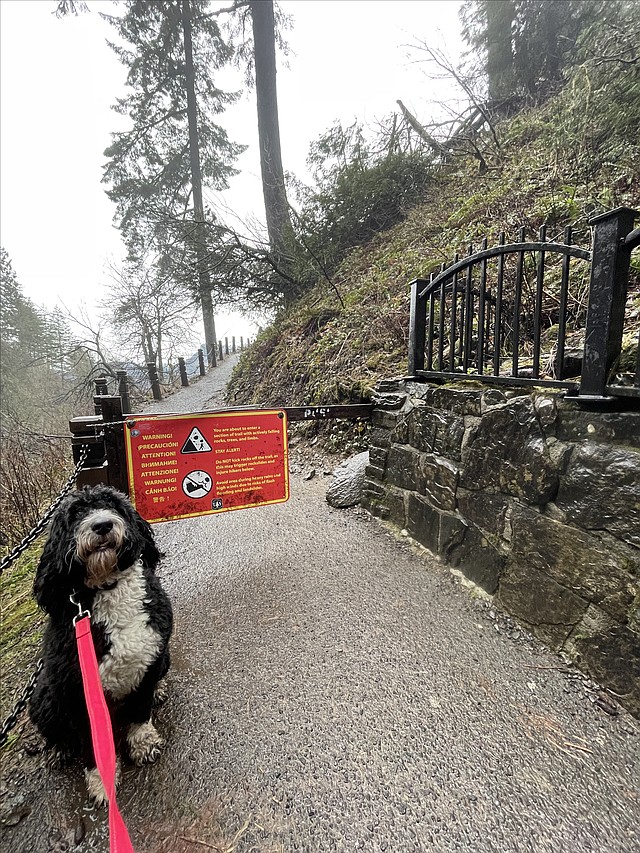 Much of the area around Multnomah Falls is hazardous, with falling rocks and trees. (Julia Lerner/Cascadia Daily News)

Unlike Multnomah, the crowds at Horsetail were nonexistent. Maya and I had the waterfall entirely to ourselves for a while. She got to play in the shallow pools beneath the stream before heading back to the base lodge for some snacks.

Multnomah and Horsetail Falls are just the tips of the iceberg in the area. The corridor is known for its waterfalls, with Wahkeena, Fairy, Oneonta and others well off the beaten path of Multnomah. We’ll definitely be back on a hot summer day to swim in the pools and see more of the region.

We left the waterfalls around 4 p.m., and Maya was asleep within minutes. She slept most of the drive back to Bellingham, and I almost forgot she was in the backseat during the 4.5-hour trip home.