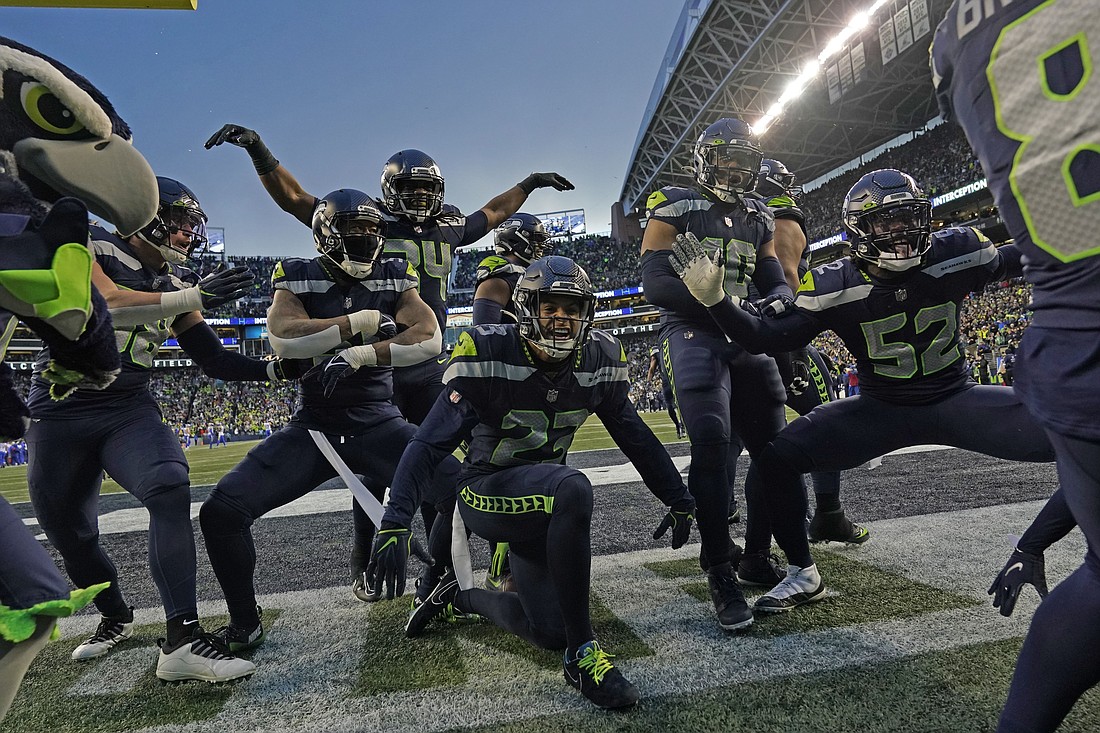 The Seattle Seahawks celebrate after an interception by safety Quandre Diggs during overtime of an NFL football game against the Los Angeles Rams at Lumen Field on Jan. 8. (Abbie Parr/AP Photo)
By Tim Booth, AP Sports Writer

RENTON — Ten months to the day the Seattle Seahawks entered the next chapter of their history, they qualified for the playoffs in a season where pundits believed they would be in the league’s basement.

On March 8, 2022, Seattle started that new chapter with the decision to trade Russell Wilson to Denver, choosing coaching continuity and draft capital over the power of a franchise quarterback.

And on Jan. 8, 2023, with once cast-off QB Geno Smith at the helm, the Seahawks found themselves back in the postseason through a confluence of their 19-16 overtime win over the Los Angeles Rams and Detroit’s victory over Green Bay in the final game of the NFL regular season.

The overall success of the season coupled with making the playoffs is validation for coach Pete Carroll in his 13th season in charge of the Seahawks. His methods and decisions were questioned and yet Seattle ended up in the place it has been most often since Carroll took over in 2010 — playing meaningful games in January. This is Seattle’s 10th playoff appearance in Carroll’s tenure.

And in that context, no matter the result of Saturday’s wild-card round matchup against San Francisco, this season has been a success for Seattle.

Asked on Monday in general if he liked proving people wrong, Carroll said: “Heck yeah. I love doing that. I have no problem with that, I don’t mind telling you that.”

Kenneth Walker III put quite the exclamation point on the regular season. Walker rushed for 114 yards on a season-high 29 carries in the win over the Rams. Walker closed the regular season with three straight 100-yard games after more than a month where he struggled to gain traction in the run game and was slowed by an ankle injury.

Walker became the second rookie 1,000-yard rusher in franchise history and finished the regular season with 1,050 yards and nine TDs. He needs a bigger day than the 12 carries for 47 yards he had in the previous meeting with the 49ers if the Seahawks are to pull the upset.

The Seahawks need to find a spark in the passing game and specifically getting DK Metcalf more involved. In the past two games, Metcalf had a combined four receptions for 43 yards and he didn’t find the end zone in the final four games of the regular season. Metcalf was hounded by some pretty good cornerbacks the final two weeks facing the Jets and the Rams, but it’s vital the Seahawks find ways for Metcalf to get the ball in his hands against the 49ers.

It’s not outlandish to say the Seahawks playoff spot was saved by safety Quandre Diggs with his interception in overtime against the Rams.

Van Jefferson had broken free from coverage and was wide open for a potential game-winning touchdown, only to see Diggs flash in front of him for a leaping interception, his second straight game with a pick.

Diggs’ play was reminiscent of Earl Thomas when he was an All-Pro safety manning the middle of the field for Seattle. The Seahawks have struggled at times to force turnovers this season and Diggs continuing his late run of interceptions against the 49ers would be an important boost for Seattle.

For all the accolades Smith has deserved this season, his play toward the end of the season had some lapses that can’t happen if the Seahawks are going to have a chance of knocking off the 49ers. The finale against the Rams was a good example. Smith was intercepted on the first play of the game by Jalen Ramsey. He was picked off again by Ramsey in the second half, forcing a throw while being hit. And he had a few other dangerous passes that could have become turnovers.

While Smith threw a pinpoint TD pass to Tyler Lockett and made several key plays both with his arm and feet in the fourth quarter and overtime to help earn Seattle the victory, his performance must be more like it was in the middle of the season and not toward the end.

“Obviously started the game bad, but we found a way, and it took everybody,” Smith said. “I was just happy to see that happen.”

Carroll said that G Phil Haynes (ankle) and S Ryan Neal (ankle) both have a chance of making it back this week. Both players were inactive against the Rams. CB Tariq Woolen, DE Shelby Harris and RB DeeJay Dallas all had “bumps and bruises” coming out of the win but should be OK.

1 — The number of seasons the Seahawks and the Seattle Mariners have both made the postseason. The two biggest professional sports franchises in the city had never made the playoffs in the same season until this year.

The Seahawks must find a way to solve the 49ers after getting easily handled by San Francisco twice this season. Seattle was overwhelmed by the 49ers 27-7 in Week 2 in Santa Clara and struggled badly offensively in a 21-13 loss to the 49ers on a Thursday night in Seattle in mid-December.