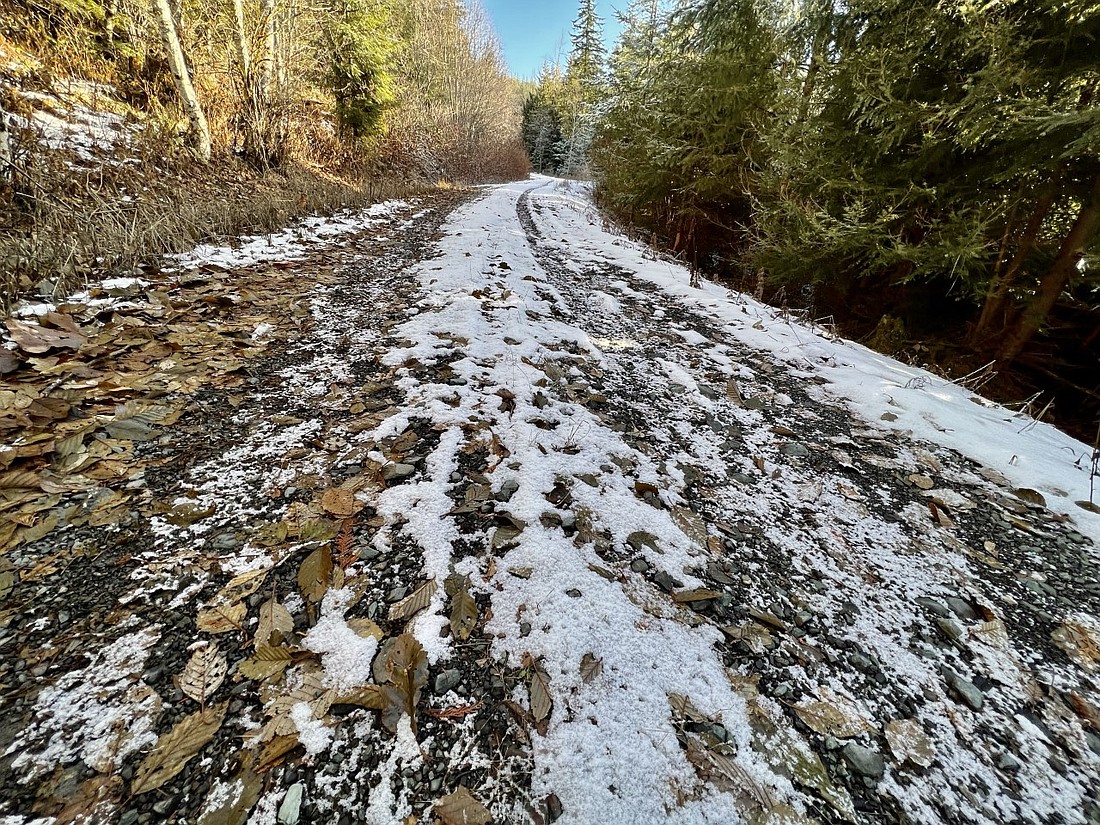 CL-1000, a logging road partially owned by Sierra Pacific Industries, is an alternate route to the Canyon Lake Community Forest that Whatcom County leaders are requesting a permanent easement for. (Photo by Elliott Almond)
By ELLIOTT ALMOND
CDN Contributor

A long battle over public access to a remote Whatcom County park that has one of the oldest known forest stands in the Pacific Northwest appears close to a breakthrough.

“The right people are talking; that’s the reason for my optimism,” Knox said. “The county and Sierra Pacific are having some good conversations to advance the issue.”

Bennett declined to provide details about the negotiations or give a specific timeline for a resolution other than saying he believes a deal is close.

The issue has centered on a section of logging road blocked from public access by one of the nation's largest private landowners. The county and California-based Sierra Pacific have been at loggerheads over a road easement across timberland that would allow the public to visit the 2,266-acre park in the Mount Baker foothills above the Middle Fork of the Nooksack River.

The situation has been exacerbated by the 2009 closure of the main access road in which the county has an easement. Canyon Lake Road, just off Mosquito Lake Road east of Deming, has had storm damage since 2006, said Christ Thomsen, Whatcom County’s operations manager.

It would cost thousands of dollars to repair the road where fallen trees now make it impassable just beyond a yellow gate blocking the entrance. 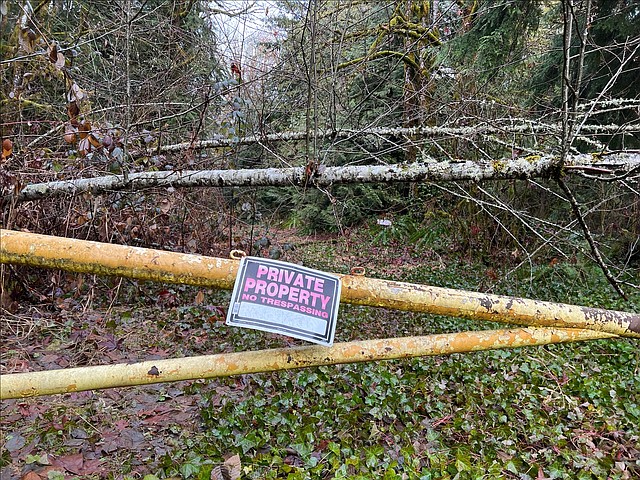 Canyon Lake Road, the main access to Canyon Lake Community Forest, has been closed since 2009 because of major storm damage. It would cost Whatcom County thousands of dollars to repair the road. (Photo by Elliott Almond)

The alternate route to reach the community forest, which includes 700 acres filled with old cedar and western hemlock, is forest road CL-1000 (CL stands for Canyon Lake). It passes the bottom of Racehorse Falls and eventually reconnects with Canyon Lake Road to the park.

But Sierra Pacific has limited access along CL-1000. County leaders have requested a permanent easement on the timber company's section of CL-1000, a hilly, gravel road that crosses land managed by the state Department of Natural Resources until reaching a blue gate blocking vehicle entrance.

“It’s a surreal sort of thing when you make it to the property,” said Alex Jeffers, Whatcom Land Trust’s conservation director. “All of a sudden, you see a big Whatcom County parks sign. There is this amazing gem of a park that is a public space, but it’s 5 miles behind a locked gate. It is really a shame.”

Whatcom Land Trust holds a conservation easement to ensure the old-growth forest is permanently protected and publicly accessible but does not otherwise manage the property. Whatcom County and Western Washington University have co-owned the forest for 25 years. 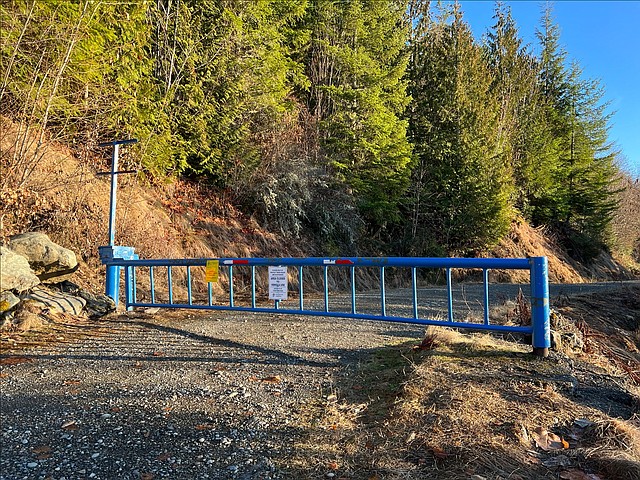 Whatcom County leaders hope to gain an easement along a logging road owned by California-based Sierra Pacific Industries. The timber company has a gate to prevent people from driving across its property to reach the public Canyon Lake Community Forest. (Photo by Elliott Almond)

Whatcom County Executive Satpal Sidhu called vehicle access to Canyon Lake a high priority in a May 3, 2022, letter to Sierra Pacific Burlington District Manager John Gold. Sidhu said in the letter that the county would share costs for maintenance and improvement of the section of road the public uses to reach the community forest. The costs also include signage, pullouts and gates.

An easement allows for the construction and use of a road by a party other than the property owner.

The logging road would be available to the public except during winter months, fire closures and tree harvesting.

“We understand the importance of this matter to many in the community, and we are working diligently with the county to identify options to re-establish safe, environmentally sensitive access across SPI lands,” Sierra Pacific Spokeswoman Lisa Perry said in an email.

“It’s related to the leadership of the executive, who is showing the ability to reach out to folks and come to an agreement,” he said.

Lack of access has stymied Western Washington University students from conducting research projects or taking field trips to the park. 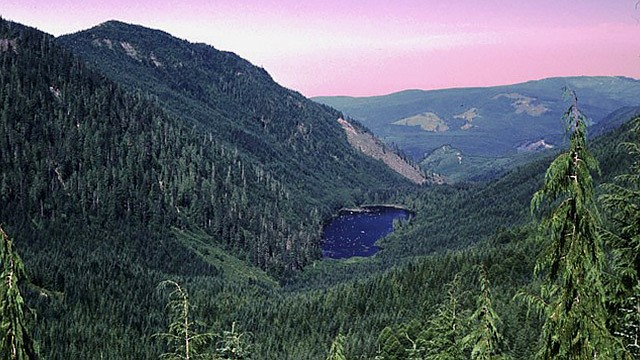 The Canyon Lake Community Forest has about 9 miles of hiking trails around a lake and through old-growth trees. (Photo courtesy of Whatcom County Parks and Recreation Department)

“Access to the forest supports the commitment to hands-on experiential learning via course-based field trips, group projects, and faculty-guided individual graduate and undergraduate research opportunities,” said Teena Gabrielson, dean of the university’s College of the Environment.

She said the biodiversity of the forest and alpine wetlands offer opportunities for invaluable research, including comparative studies of the climate impact of old-growth and regenerated logged trees.

As of now, visitors can park near the gate on CL-1000 and trek almost 6 miles to the community forest along a logging road where clearcutting is visible on steep slopes. Some people ride mountain bikes from the gate to reach the park. However, bikes are not allowed on trails in the community forest.

Sierra Pacific opens its gate in August for the black bear fall hunting season. But company executives have resisted allowing regular access because of safety concerns. A 19-year-old man drowned in the lake after ingesting drugs three years ago, the Whatcom County Sheriff’s Department said in 2019.

The area with Pleistocene-age alpine glacier features gained attention in the early 1990s because of student research. A few years later, James Agee of the forestry school at the University of Washington discovered some of the area’s cedar and hemlock groves were ancient. 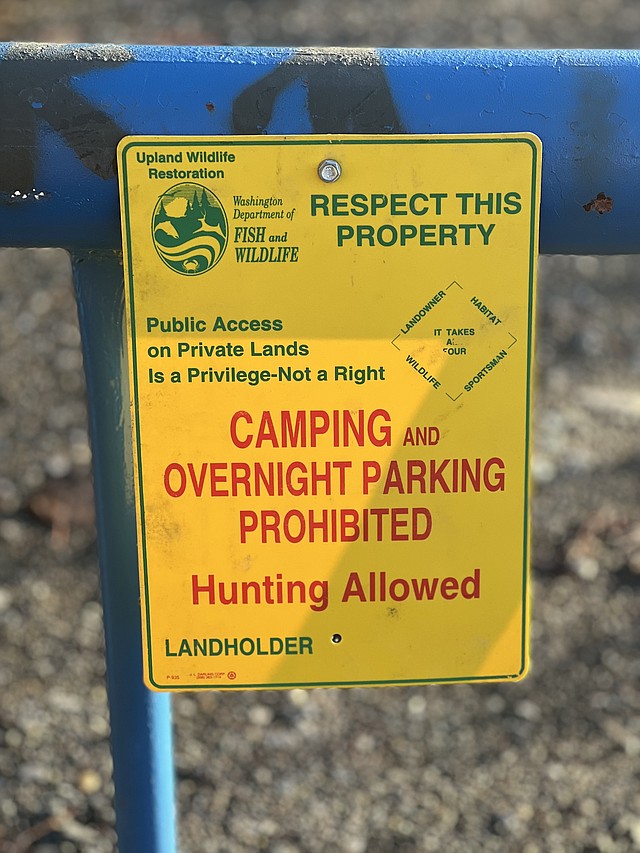 A state Fish and Wildlife sign posted on a Sierra Pacific gate that blocks entrance along forest road CL-1000 warns visitors to “Respect this property.” (Photo by Elliott Almond)

Land trust executives brokered a deal in 1998 with then-owner Crown Pacific to buy the property for $3.7 million. The bulk of the money came from the Paul G. Allen Forest Foundation ($1.85 million), an anonymous out-of-state donor ($1 million) and the Whatcom County Conservation Futures program ($700,000).

“Our access is vital because it is the outcome of the hard work and innovative thinking of people nearly three decades ago who were committed to protecting a diverse landscape buzzing with life,” Western's Gabrielson said. “This kind of forward-thinking dedication is one of the critical foundations upon which the College of the Environment is built.”

The park is different from many Pacific Northwest community forests that often involve managing timber production. Canyon Lake is a nature reserve to protect an ecologically significant forest that has escaped fire and chainsaws over the last 1,000 years. Pets, livestock and camping are not allowed in the park. 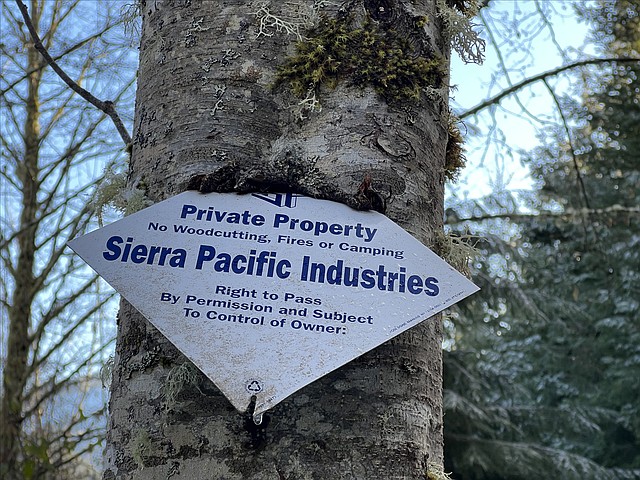 Sierra Pacific Industries has posted signs warning visitors to not cut wood, build fires or camp on its tree farm. The timber company permits visitors to hike or bike across its property to reach a community forest owned by Whatcom County and Western Washington University. (Photo by Elliott Almond)

The area, surrounded by clear-cuts and tree farms, has about 9 miles of hiking trails. The trail to the old-growth forest can be extended into DNR-managed land to a ridge at 5,000 feet with stunning views of Mount Baker and the Twin Sisters.

“It feels like you could stick your tongue out and lick the snow off of Baker, you are that close,” said Jeffers, the land trust executive.