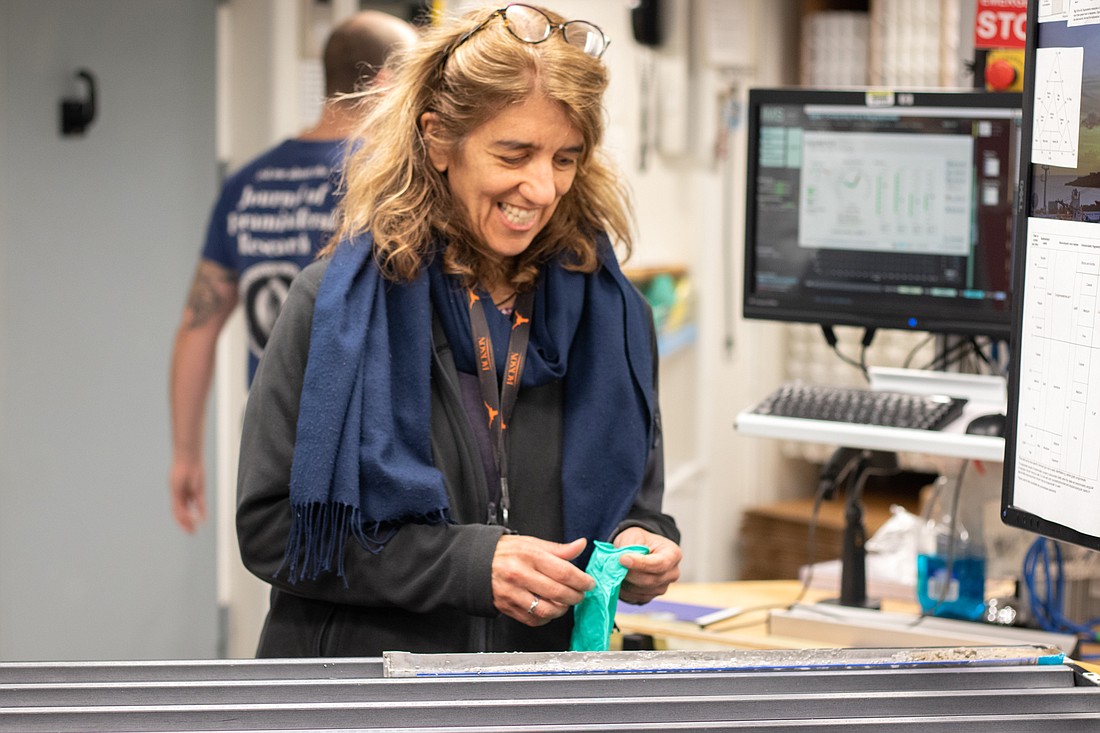 Western Washington University Professor Susan DeBari on board the Joint Oceanographic Institutions for Deep Earth Sampling (JOIDES) Resolution research vessel in December 2022. She is one of many scientists aboard with extensive knowledge of the research being conducted during the expedition. (Photo courtesy of Sara Whitlock, IDOP JRSO)
By KELTON BURNS
Staff Reporter

Scientists are collecting samples from the ocean floor off the coast of Greece in hopes of predicting future volcanic activity. Among the team will be volcanologist Susan DeBari, a geology professor at Western Washington University.

“I feel really lucky to be here,” DeBari said in a Zoom interview. 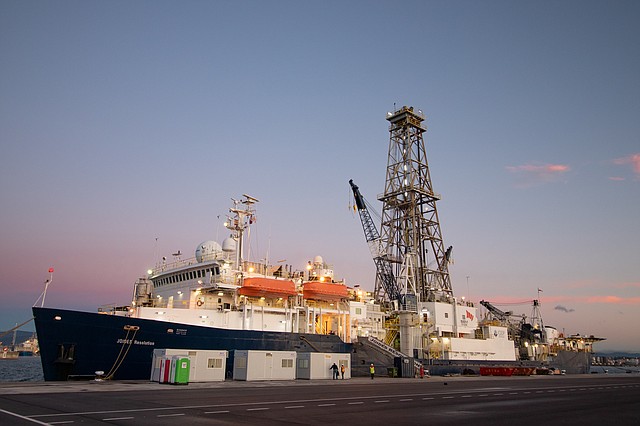 The Joint Oceanographic Institutions for Deep Earth Sampling (JOIDES) Resolution sits idle at a dock in December 2022. The research vessel is owned by Siem Offshore, a Norwegian company, that maintains, sails and provides staff to operate the drill. (Photo courtesy of Sara Whitlock, IDOP JRSO)
The expedition’s goal is to learn about the volcanic field’s eruption history by collecting samples from the ocean floor surrounding the islands, according to a media release from the International Ocean Discovery Program. These samples will “provide a rich record of volcanic activity much older than that known on land, extending the knowledge of eruptive history back 3 million years or more.”

Information about past eruptions helps scientists assess the risks of future events such as earthquakes, submarine eruptions and tsunamis, according to the release.

DeBari knew she wanted to apply for the expedition when she saw the goals for the research.

“It’s a little hard to get that full story from just looking at what the eruptions have left on land,” Debari said. “Really, the ocean floor is the best recorder of all these eruptions.”

While on the mission, DeBari will be analyzing minerals within eruptive products gathered through the drilling. “When you analyze those crystals, you can dig back down through the layers and tell a story from there,” DeBari said. She likened her work to analyzing tree rings to learn more about the history of magma.

It's the same kind of work DeBari's group at Western works on at Mount Baker, where they're trying to gain a better understanding of previous eruptions to help us know what could potentially happen in the future.

"Volcanoes don't wake up one day and decide to have any old kind of eruption. Usually, whatever they've done in the past, that's what they'll do again in the future,” DeBari said.

The expedition began in December 2022 and will end in February 2023. There are 117 people aboard the Joint Oceanographic Institutions for Deep Earth Sampling (JOIDES) Resolution research vessel, including 66 crew members and 51 members of the science party. The science party consists of 20 technical staff, who run the labs, and 31 scientists, whose research is related to the trip.

The three islands within the volcanic field of the expedition are Santorini, Christiana and Kolumbo, located in the South Aegean Sea. These islands are home to a year-round population and, according to the program's release, more than 2 million visitors a year. 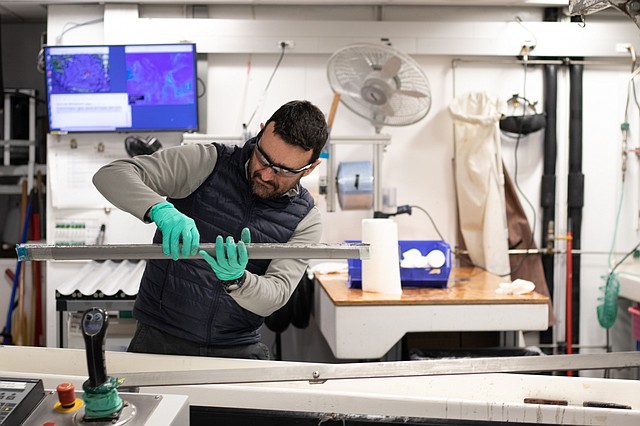 The research vessel is a drillship set up with a coring device, one of just two scientific ocean drilling ships in the world, according to the JOIDES Resolution website. It drills into the ocean floor and brings up samples every 10 meters. DeBari used the analogy of sticking a straw into a layer cake to describe the process. The vessel then pulls the layers to the surface for study.

The expedition also has paleontologists on board to study fossils in the unearthed sediment, which helps them determine how far back the samples are from. DeBari said the current samples are from around 3 million years ago.

According to its website, the International Ocean Discovery Program is a marine research collaboration that explores Earth’s history using ocean-going research platforms to recover data recorded in the seafloor. The program receives funding from more than 20 countries including Australia, Canada, China, Japan, India, the United Kingdom, the United States and 13 other European countries.

DeBari said there are scientists from most of these countries on the expedition who work together every day. 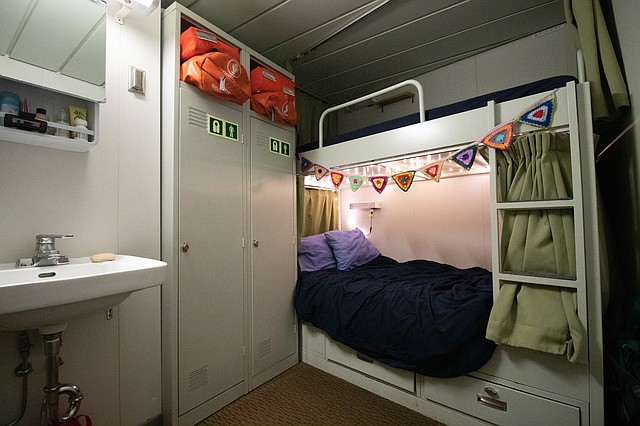 A decoration hangs from an otherwise impersonal sleeping quarter on the Joint Oceanographic Institutions for Deep Earth Sampling (JOIDES) Resolution. The crew of the ship will stay on board for a full two months, from December 2022 to February 2023. (Photo courtesy of Sara Whitlock, IDOP JRSO)

“We work very closely together and it's amazing how scientific collaborations develop,” she said. The ages of the scientists also vary, with Ph.D students in their 20s to experts who have been working in their fields for decades.