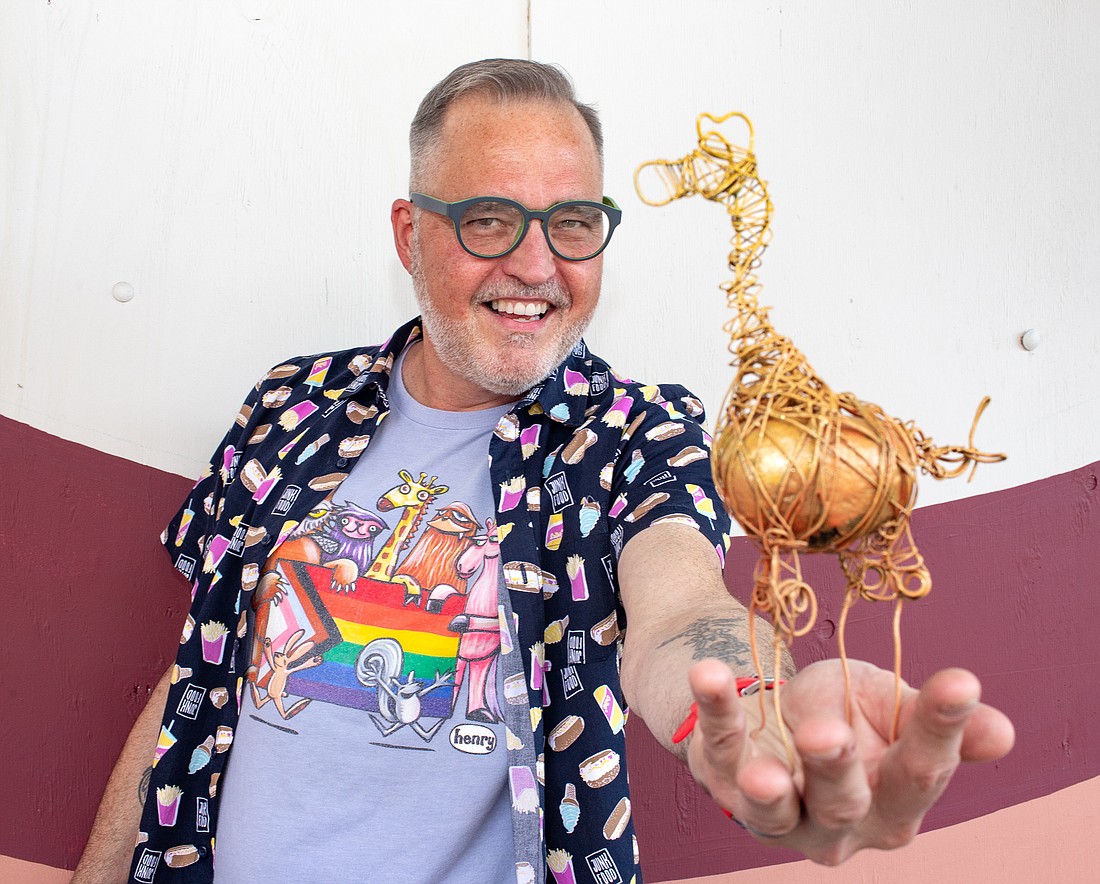 Kevin Coleman holds a rock turned giraffe statue outside of WinkWink on Sept. 29. The rock was used to smash the windows that were once behind Coleman, so he turned the dozen stones into art to auction off. He raised nearly $4,000 for Whatcom Youth Pride. (Hailey Hoffman/Cascadia Daily News)
By JEMMA ALEXANDER
Staff Reporter

On the morning of Aug. 6, five men threw rocks through the windows of WinkWink, located on Cornwall Avenue, amid controversy about the shop’s youth sex-ed classes. In a project titled “Reclaim the Rocks,” Coleman painted, then auctioned off, the 10 rocks that were used to vandalize the shop.

Misinformation about “Uncringe Academy” made it all the way to national TV, like “Tucker Carlson Tonight,” WinkWink owner Jenn Mason said. In his segment, Carlson said Uncringe Academy was a part of school curriculum.

“Several news outlets chose to grossly misinterpret our work into something sinister,” said Mason, who serves as a school board member for Bellingham Public Schools.

Mason was not surprised by the vandalism, but she was affected.

“I felt really violated and frustrated and angry,” she said.

The attackers have not yet been identified or found by police.

After the windows were boarded up, Mason asked Bellingham artists to donate their time in reviving the store’s cheerfulness. One of the artists, Zomi Alexander, suggested that Mason paint the rocks. Mason had not yet been able to discard the symbols of hate.

“She really spurred the idea in my mind,” Mason said.

She messaged Coleman and asked if he would take on the project of turning the rocks into art.

“I thought of him because I know him as such a wonderful, vibrant artist in our community who really cares about people and his whole mission is really to spread love and joy,” Mason said. 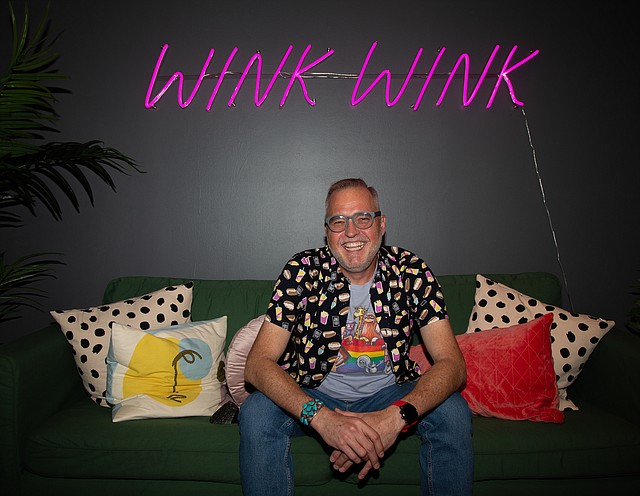 Kevin Coleman sits on the couch in the WinkWink workshop space. Coleman sought to turn the negative event of WinkWink having their windows smashed with rocks into something positive and beneficial to the community. (Hailey Hoffman/Cascadia Daily News)

Coleman was enthusiastic about the project. He has worked in downtown Bellingham and has seen the impact Mason has had on the community, much of which he said is undervalued.

“Seeing that type of hatred and violence in our community done so cowardly is infuriating,” Coleman said.

This isn’t the first time Coleman has used his art to support the Bellingham community. Some of the donations he has made have been to Skookum Kids, a nonprofit that seeks to improve the lives of foster kids, and Lydia Place, a nonprofit that helps individuals and families experiencing homelessness.

“Art has always been transformative and captured history and brought people together,” Coleman said.

In keeping with that philosophy, he wanted to paint the rocks so nobody ever knew they were used for something hateful.

Much of the art Coleman creates, as well as the sculptures made from these rocks, depict sea life, parallelling his job as director of Bellingham SeaFeast. The rocks were turned into creatures such as octopuses, crabs, a seahorse and, slightly off theme, a giraffe. 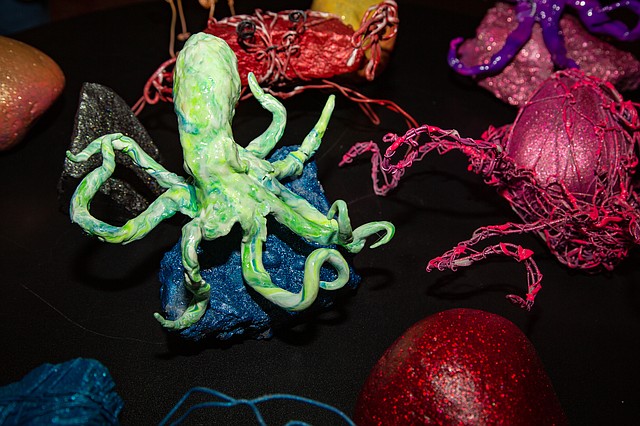 Kevin Coleman covered the rocks in sparkly paint and added sea creatures, like octopi and crabs, to their tops. All the rocks glow in the dark. (Hailey Hoffman/Cascadia Daily News)

After selling the 10 rocks, the auction concluded on Sept. 20.

Coleman was happy to support Whatcom Youth Pride, an organization that he said helps families and kids deal with bullying, normalize sensitive topics and have open conversations. Mason said the organization not only accepts LGBTQ+ kids, but affirms and celebrates them.

Coleman’s goal for the project was to generate a “ripple of positivity.”