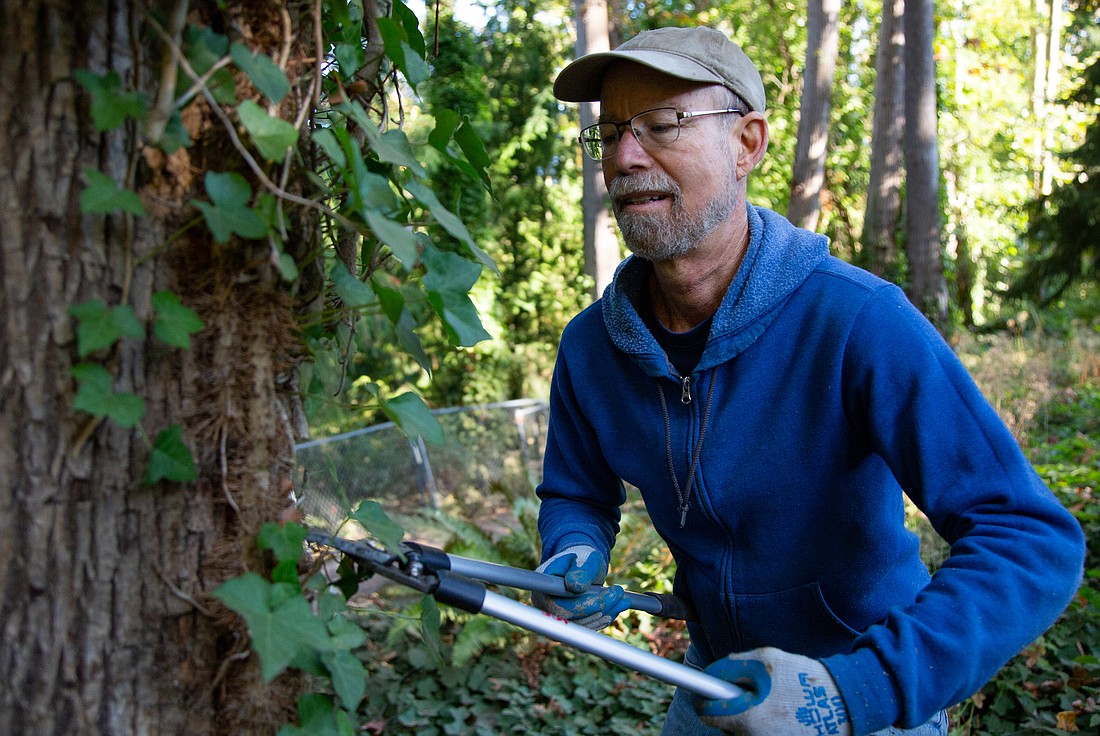 Michael Feerer, the executive director of the Whatcom Million Trees Project, clips ivy vines at Whatcom Falls Park on Sept. 25. Around a dozen volunteers removed large strips of ivy during an event with the organization during "All in for Climate Action" week. (Hailey Hoffman/Cascadia Daily News)
By OLIVIA HOBSON
Staff Reporter

A ferocious battle is playing out along the streets and trails of Bellingham neighborhoods and parks. The soldiers are armed with pruners, gardening gloves and an intimidating grip strength. When the struggle comes to an end, the battleground is littered with remnants of this persistent enemy.

This campaign manifested itself as a volunteer work party at Whatcom Falls Park Sunday morning. Leading the charge was Michael Feerer, executive director for Whatcom Million Trees Project. The work party was the second event the nonprofit hosted to mark Bellingham’s “All in for Climate Action” week, which wrapped up Sunday.

Last week's lineup included story walks, climate socials, presentations from various local climate organizations and more, all with the goal of creating community action in the face of climate change. 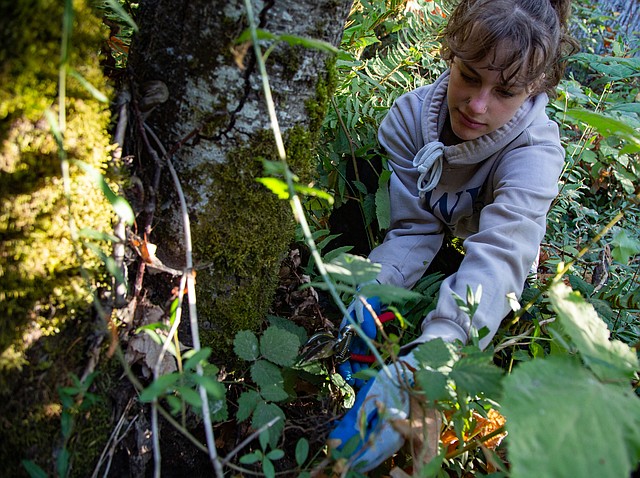 The ivy removal effort is one way Whatcom Million Trees Project is encouraging the community to stand up for Bellingham trees. Its mission is to plant and protect 1 million trees in Whatcom County. Since starting in early 2021, the group has planted 451 trees and protected more than 280,000 through advocacy work and regulation development.

During climate action week, Whatcom Million Trees Project used its events to educate the community about how to protect local trees. A webinar on Sept. 19 taught attendees how to become tree ambassadors for their neighborhoods by identifying, documenting and protecting mature, climate-significant trees, and Sunday’s work party called on troops to help remove invasive English ivy.

Native to Europe, colonial settlers originally brought the trailing vine to North America for decoration. The plant creates carpets of waxy leaves that quickly take over disturbed areas around trails and slopes, where the vines start to climb up the trunks of trees and don’t stop until they reach the sunlight in the canopy.

By the time the ivy reaches the top of the tree, it’s almost guaranteed the tree will die, Feerer said. It takes a number of years to make the climb, but it diminishes the tree’s strength throughout, weighing down the limbs, damaging the bark and limiting the amount of sunlight the tree can use.

To remove the ivy, volunteers clipped the roots sneaking up the trunk at chest height before peeling the tangle of vines back from the base of the tree in 6-foot rings. The ivy left on the tree, severed from the soil and nutrients, will eventually die, and clearing the 6-foot ring will prevent the ivy from climbing back up for at least a few years.

“It's really great hands-on protection work. It really makes an immediate impact,” Feerer said. “It’s not like planting a tree and waiting 20 years.”

Having a tangible impact is important to feel productive, Feerer said, especially when the more policy-driven tree protections can seem to grind on at a snail's pace.

Protecting mature trees and strengthening the rules in place that stop them from being unnecessarily cut down is one of her primary concerns, Anderson said.

“These trees are critically important to the health of our community. A 100-year-old tree is not going to come back for another hundred years,” she said.

The plan, which will outline sustainable, long-term forest management strategies the city can use to protect greenery from sidewalk trees to community parks, has been in development since early 2021. Phase one gathered data on the existing urban canopy in Bellingham and how it has changed in the past 15 years. The plan is currently in phase two, which collected community feedback on how the urban forest should be managed and protected.

The public input period ended on June 15, and the Public Works Department hopes to share the results with the City Council by the end of the year, said Annaleise Burns, habitat and restoration manager for the city.

Phase one found that 40% of the city is covered with canopy. The project also calculated how that cover has changed since 2006, and found that while overall tree cover was relatively stable, certain areas with high development experienced loss.

Phase one also calculated how equitable the canopy cover is across different Bellingham neighborhoods. Using a tree-equity scoring program that accounts for community demographics like income, employment, race, age and susceptibility to climate change, the report found the Lettered Streets, York and City Center neighborhoods have canopy cover below the minimum target.

To ensure these neighborhoods do not lose more trees to development than necessary, the city has specific guidelines that need to be met before trees can be cut down, Burns said.

“Any development or redevelopment proposed within these neighborhoods is also carefully reviewed to ensure they meet land-clearing and environmental protections,” Burns said in an email.

But for some, those protections don’t feel like enough.

“[City] staff are doing a phenomenal job. We’ve identified an issue,” Anderson said. “The process takes a long time, but I’m getting a little impatient on us really fully addressing it.”

While waiting for the Urban Forestry Management Plan to be completed in spring 2023, Feerer and Whatcom Million Trees Project are working to create some protections for big trees that tackle smaller problems, like a lack of permit enforcement or a communication breakdown between the city and arborists.

Currently, arborists can remove trees for clients without confirming if there are proper permits in place, or even if a tree is public or private. Large trees are removed unnecessarily and, in some cases, without the proper permitting required for city tree removal, Anderson said.

Anderson and Feerer hope to change that by creating policies that allow arborists and the city to work together, as well as guarantee an enforced permitting system.

“Right now, there’s very little tree protection, especially for the big, mature trees in this town,” Feerer said. “We would like to have some teeth behind this.”

Back on the ground, volunteers celebrated a small victory. Over three hours, ivy was cleared from 22 trees, allowing them to continue cleaning the air, purifying the water and making Bellingham beautiful. While politics ramble on, getting out into the community and spending a morning helping trees can do a world of good, Feerer said.

There will be more work parties for those who wish to join the ranks of ivy soldiers. Identifying and mapping significant trees in Bellingham neighborhoods, and sharing that information with others, is a valuable component of knowing what trees need protection, whether that’s through ivy removal or a city inspection.

“There’s so many crises and things going on in the world right now, that to have a little piece of hope that we can do hands-on, small scale [work] ... just makes all the world of difference for people,” Feerer said. “Building up that sense of hope and can-do-ness is really huge in this climate crisis we’re facing.”