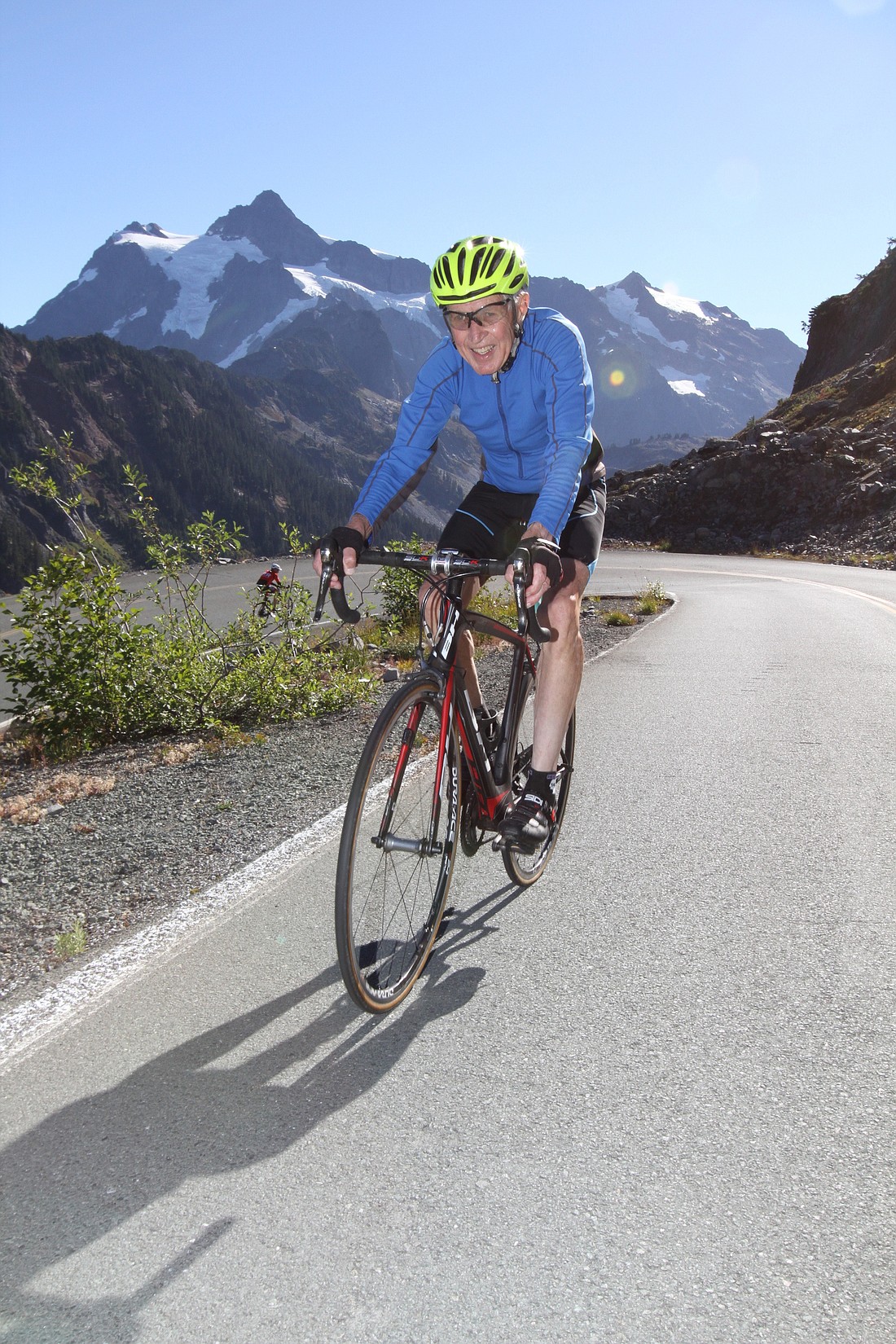 Robert "Bob" Harris, 80, races to the finish line of the annual Mt. Baker Hill Climb. Harris raced in the 60-plus competitive division, making a time of 2:11:53. He was the oldest racer in the event. (Photo courtesy of Burke Hovde)
By AUDRA ANDERSON
News Producer

Robert “Bob” Harris, 80, has honed a multitude of hobbies since retiring from his work as an ear, nose and throat doctor in Bellingham. He grows vibrant orchids and other flowers with his wife, Sandy Wolf. He plays the piano, watches birds from his balcony and dotes on his grandchildren and his dog, Coco Loco.

With his shock of white hair, his slight 135-pound frame wrapped up in an armchair and a calm demeanor, Harris may appear to be enjoying his retirement years in mellow bliss.

Until he gets on a bike. 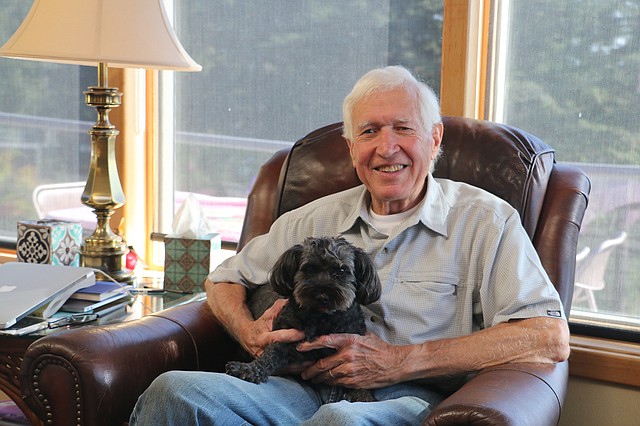 Bob Harris sits with his dog Coco Loco in his Fairhaven home on Sept. 8, a few days before the originally scheduled day of the Mt. Baker Hill Climb. (Audra Anderson/Cascadia Daily News)

“He’s a machine,” Harris’ son, Bob, said with a smile as he crossed through the kitchen of his father’s Fairhaven home.

Bob and his daughter were visiting Harris for his 80th birthday, which they would celebrate two days before the 80-year-old planned to compete in the Mt. Baker Hill Climb road race originally scheduled for Sept. 11.

The race, a grueling 22-mile, 4,462-feet ascension to Artist Point, was postponed to Sept. 25 due to unhealthy air quality from wildfire smoke. Instead of leftover birthday cake weighing him down, Harris had two more weeks to prepare for the annual competition.

On a sunny Sunday morning — the changing of the seasons beginning to crispen the air — Harris sped through the finish line at Artist Point with a grin, finishing sixth in his age group. Finished racers sang him “Happy Birthday” as he whizzed to a stop, a sentiment arranged by Whatcom Events Race Director Anna Rankin.

Harris was the oldest racer, juxtaposed by riders as young as 16.

The Mt. Baker Hill Climb has just one age group for those over the age of 60, Rankin said. Harris managed a time of 2:11:54, beating his goal of two hours and 15 minutes and competing against some racers 20 years his junior.

Rankin said seeing someone Harris’ age was unusual. She loves to see the whole spectrum of ages riding together on the highway.

Harris said he was delighted with the outcome of the race. 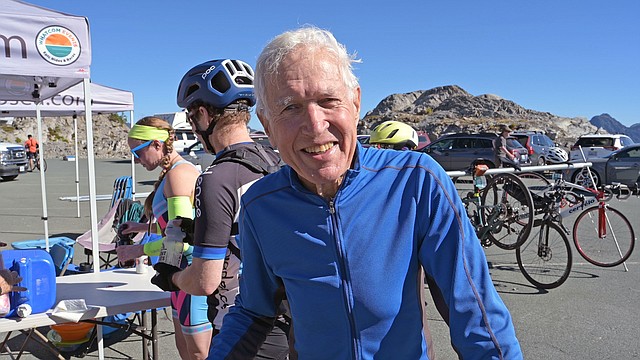 “I’m not sore — in fact, I played pickleball yesterday and played better than I usually do,” Harris said Tuesday.

A decade earlier, for his 70th birthday, Harris brought his two-wheeled talents to Bend, Oregon, for a higher-stakes race. Despite a flat tire, minimal racing experience and an unfamiliar route, Harris placed in the top 10 in the 70–75 age group of the 2012 Masters Road National Championships race.

“I didn’t have high expectations since I had never raced with people outside Bellingham,” Harris said. “I got eighth in the nation.”

Harris always planned to relive the excitement of a national race on his 80th birthday. But this year, wildfire smoke and travel limitations prevented him from making the trek to Albuquerque, New Mexico, for the 2022 Masters Road National Championships.

“I decided I didn’t need to race nationally that much. My ego didn’t require it,” Harris laughed.

To prepare for a race, “I just ride my bike,” Harris said. His daily pedals average 20-plus miles. The day before a race, he “tones it down,” cycling maybe just 5 miles.

During a race, Harris takes only as much water as he thinks he’ll drink. He monitors his weight closely, ensuring he maintains 135 pounds leading up to a competition.

Harris is more motivated by his desire to do his best than any medal or bragging rights. Plus, he loves the thrill. It’s a passion Wolf is supportive, but cautious, of.

“I’m influenced by the fact my first husband was killed walking on a road,” Wolf said. “... So I have to admit I worry when [Harris] rides. But I think it really helps him. He’s consistently kind and even-keeled and relaxed. He sleeps well. He’s very disciplined in what he eats. The riding all helps that. I admire him for that.”

“None of that has scared me much,” he said, “although when I get going like 40 miles an hour down a steep hill, I think 'hmm, what if something breaks? I might be too old for this.'”

“Some of the other men that do this sport — when I first met Bob, when they would get together, they would talk about injuries,” Wolf said. “I really got the impression that part of the appeal is that it’s dangerous.”

“Sandy worries a bit. And has a right to. It is dangerous,” Harris said.

Cycling wasn’t always Harris’ sport of choice. As a young man, Harris was swept into the whirlwind running craze. He began running in his late 20s and didn’t stop the marathons and early-morning miles until his late 50s, when he developed knee problems.

“I was told that I’d be wise to switch to biking ... And I’m a little better at the biking than I was at the running,” he said with a smirk.

A few years later, Harris was having more than joint complications. He underwent open-heart surgery to repair a leaky valve. It didn’t slow him down, nor did it noticeably affect his new sport.

“I improved until I was 70, maybe even up until 75. I just kept getting better,” he said. “I was training more, trying harder and having it be a challenge. I’ve been gradually getting slower since my peak, which was in my mid-70s.” 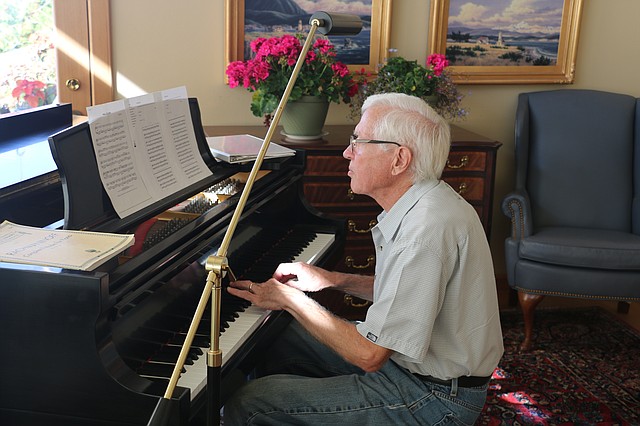 Bob Harris enjoys a multitude of tamer hobbies, such as playing the piano. He plays "Hallelujah" on Sept. 8. (Audra Anderson/Cascadia Daily News)

Harris said the future of his racing career is undecided. Wolf said she thinks he’ll quit after the Mt. Baker Hill Climb. Harris isn’t so sure.

“I’m sure my wife would like me not to train as hard as I have been. We’ll see. I wouldn’t say it’s not possible. I’m obviously a little bit of a Type A person, so I’m often racing anyone I happen to catch up to when I’m out training,” Harris said. “There’s always little races like that.”

A previous version of this story misattributed the lead photo. The photo was courtesy of Burke Hovde. The photo was updated Wednesday, Sept. 28 at 8:37 a.m. The Cascadia Daily News regrets the error.